How Millennials & Gen Z Like to Watch TV, in 3 Charts 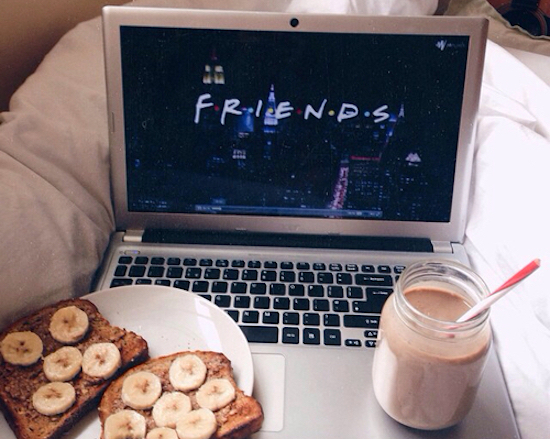 “TV” doesn’t mean what it once did. So what do young consumers even consider watching TV these days—and how do they prefer to do it?

We often call Gen Z and Millennials the Post-TV Gens–not because they’re ditching TV content, in fact, they can’t get enough of it, but because they’re growing up in a time that the definition of “TV” has completely shifted from what it once was. And as the early adopters of new TV, if you will, they’re the ones fueling the changes from traditional to new media. Even the phrase “TV show” doesn’t mean what it once did. Quartz recently asked the question, “Should we keep calling it TV if no one’s watching it on a TV set?” Since most of what we call “TV” is technically viewed via the internet, executives and creators both are re-thinking their vernacular. What words are winning out in the etymological war? Well, linguists think outdated words (like TV) will stick around for a while (we still say, “dialing a phone,” don’t we?) along with words that are generic enough to hold their meaning, like “shows” and “series.” But the Post-TV Gen’s concept of what these words mean may be more broad than those following more traditional definitions.

Traditional metrics are also playing catch up in a post-TV world. According to AdAge, Nielsen says they finally have a way to measure Netflix viewership—but Netflix says they’re way off base. Nielsen claims they can keep track of all viewing on the platform, including originals, “whether or not a studio or network wants them to.” Netflix claims, “The data that Nielsen is reporting is not accurate, not even close, and does not reflect the viewing of these shows on Netflix.” Ouch.

With all the confusion around preferences and terminology, brands can understandably get lost. So what do young consumers even consider watching TV these days—and how do they prefer to do it? We looked at the data from our recent TV & Entertainment survey and report* to pull out a few insights:

*In this survey, we told respondents that “TV content”  can include shows on TV networks and original shows released by streaming sites like Netflix, Hulu, etc. 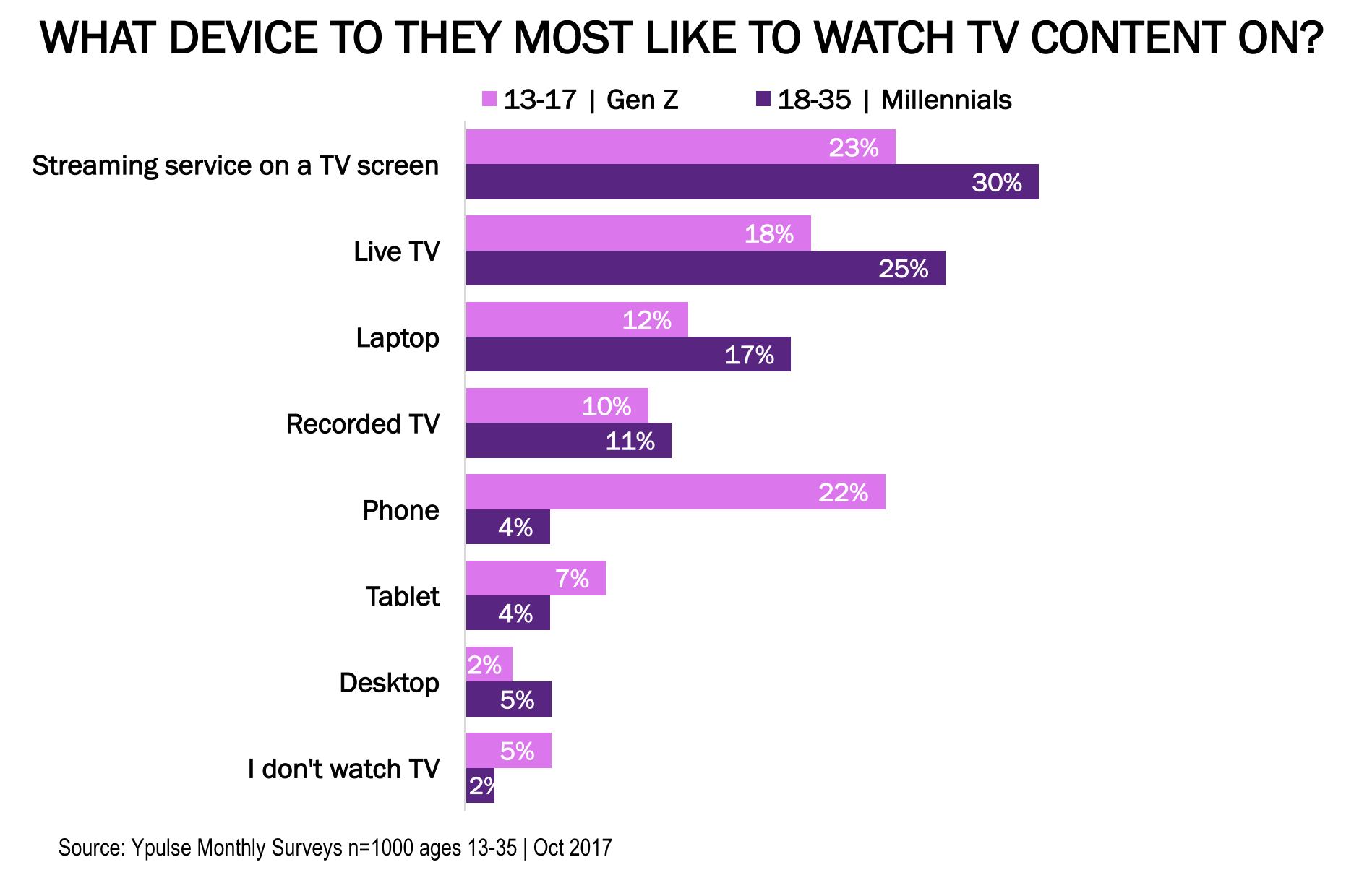 We’ll start with where they’re watching. When given the choice, 29% of 13-35-year-olds say they most like watching TV series or video content via a streaming service on a TV screen versus 24% who say they most like live TV. Millennials were more likely than Gen Z to say they prefer streaming through a TV screen, and that they like live TV—while Gen Z was far more likely than Millennials to say they prefer to watch their TV content on a phone. It’s a major generation gap that we see brewing, and threatening live TV.

Of course, Millennials’ preference is also a threat to live TV. The age divide in how Americans watch television is leading up to a major battle for live TV. A new ComScore analysis found that “there is a stark shift away from TV and toward digital” among Millennials, compared to Gen X and Boomers. In a breakdown of the total number of hours 18-34-year-olds spent with TV and digital media in 2016, digital outweighs live TV by around 11 billion hours, and smartphones are “driving the numbers way up.”

Their preference for watching TV content via streaming services over live TV is also related to their preference for the TV binge. Binging is the new normal for watching content, and it might be cutting into primetime TV’s premiere week. People are watching four hours and 21 minutes of live TV a day on average, according to Nielsen, but primetime premiere week saw an 8% drop year over year in viewing among 18-49-year-olds. Stats from Deloitte show that 73% of Americans and 90% of Millennials binge watch, and it may be playing a part in chipping away at live TV viewership. They may be waiting to watch multiple episodes all at once rather than tuning in for a specific single show.

The “channels” that they regularly watch also point to their preference for streaming: 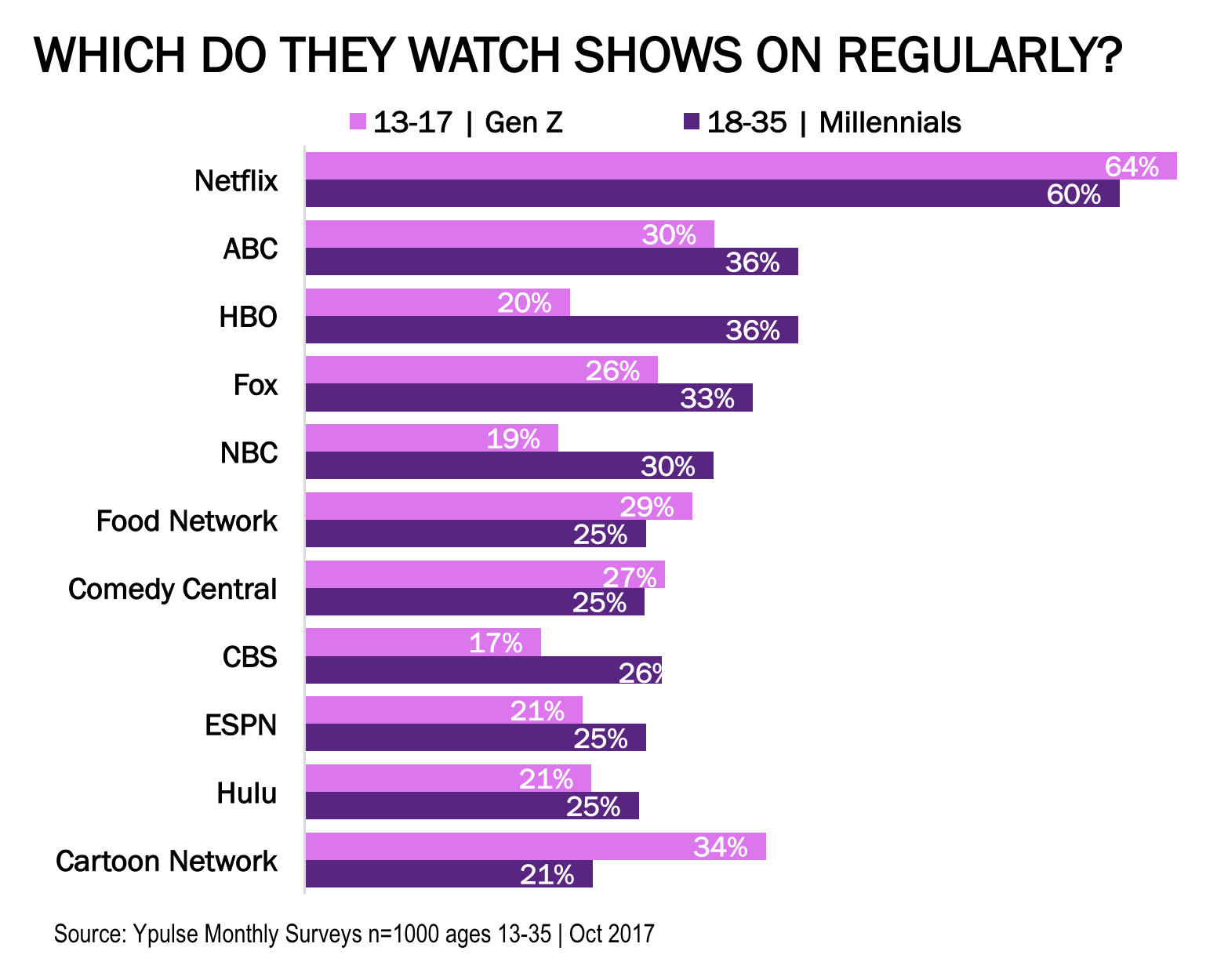 61% say they watch shows on Netflix regularly versus 35% who say they watch ABC regularly, and 33% who say they watch HBO regularly. Clearly, traditional networks are getting left behind in the Netflix era. Netflix is also winning the “steaming wars”—at least on home TV sets. ComScore’s analysis into video streamed over Wi-Fi to televisions in U.S. homes found Netflix’s penetration is around 40%, while YouTube, the next most-used service, was less than 30%. Both Amazon and Hulu are far behind at below 20%, but the latter was found to have engagement rates on par with Netflix: “People who do use [them] use [them] a lot…Both services engage their users for more than 25 hours a month.”

But networks should note that Netflix’s dominance here might also be related to Millennials’ and Gen Z’s nostalgia entertainment habits. Netflix and other streaming services are investing billions in originals, but most viewers would rather watch reruns. Nielsen data shows that just 20% of time spent on SVODs (subscription services on demand) is used to watch originals. The other 80%? That’s dedicated to “catalog programming,” all the movies and TV picked up from outside studios. Gen Z and Millennials love their reruns, so even though streaming service studios are spending tons on new series, you’re more likely to catch young viewers binging Seinfeld or Friends.

Regardless of what network or platform they’re watching, they’re likely distracted: 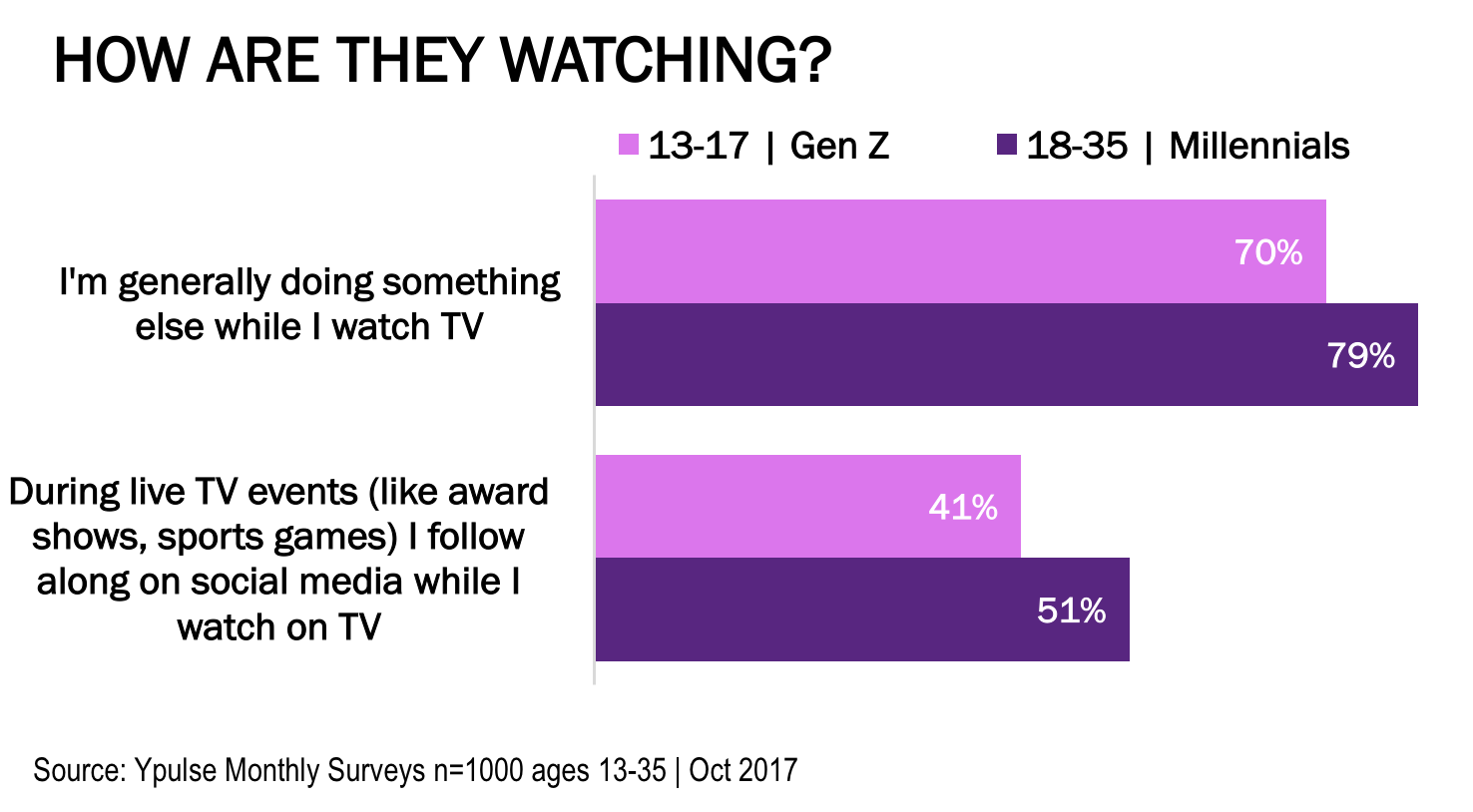 Almost four in five Millennials and Gen Z viewers say they’re generally doing something else when they watch TV. In other words, we’re dealing with a very distracted audience. If they’re watching content through their TV screens or on their laptops, they’re likely also on their phones. This isn’t to say that they aren’t ever paying attention. We also know that they are devoted and passionate viewers, with 79% of 13-35-year-olds telling us that they get extremely invested in the shows they watch. But these generations of multitaskers are integrating multiple devices into their viewing. Half of Millennials and Gen Z say that when they do watch live TV events (like award shows, sports games) they follow along on social media while they watch on TV, turning a solo endeavor into a group sport.