How StockTwits is Winning Over Millennial Investors 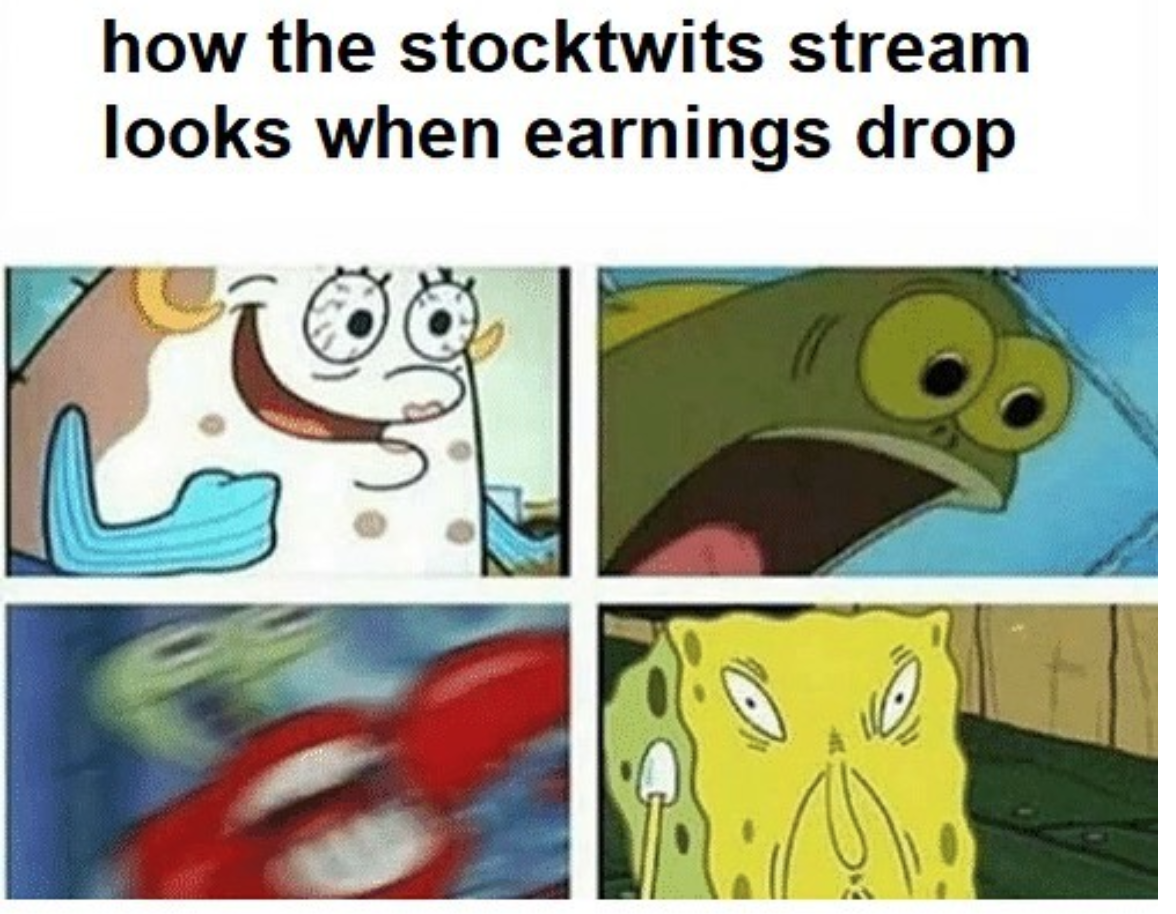 While more traditional financial institutions continue to struggle to catch Millennials’ attention, young investors are talking stocks on StockTwits, the social platform to learn how to invest from peers—and we talked to them to find out how they’re making it work…

Traditional institutions have had a hard time getting younger demos interested in finance, so when a site like StockTwits attracts 1.1 million users, many Millennial investing novices, the finance community does a double-take. Business Insider reports the platform is “growing like crazy” as a place for young people to talk stocks, trade ideas, and teach each other. It started within Twitter but quickly blew up into its own platform, where users now post 150,000 messages every day, ranging from “annotated charts” to “investing ideas” and more, acting as a community for newbie investors to get a foothold in finance.

We got in touch with StockTwits’s CEO Ian Rosen to find out what about the platform has brought in a user base that’s more than half 18-34-year-olds—the exact demo big banks have been struggling to capture. Here’s what he had to say about the site’s success: 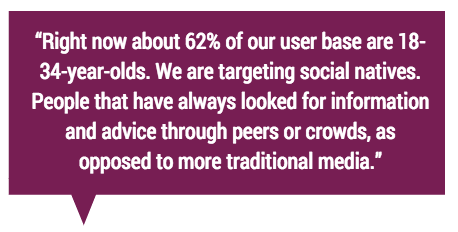 Ypulse: Tell us about StockTwits—who is your target audience?

Ian Rosen: StockTwits is the largest social platform for investors and traders, really the only of our kind at this scale. We have 1.1 million registered users who have grown about 50% a year. We’re getting younger every year. So right now about 62% of our user base are 18-34-year-olds. And that number has gone up, but we are targeting what we call social natives. People that grew up and have always looked for information and advice through peers or crowds, as opposed to more traditional media. And obviously there’s a large wave of young people that are receiving a giant transfer of wealth. As many more young people start to take control of their own financial destiny and are learning how to invest and how to manage their money, we are the largest social platform for investors. So we’re benefitting from a pure demographic trend and trying to provide opportunities for this new group of people to learn from each other, where information’s a lot more democratized than it had been historically. 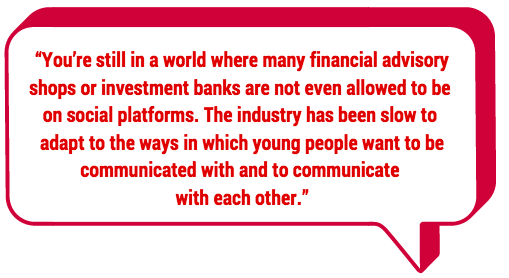 Ypulse: Why do you think traditional financial institutions have lost the trust of younger demographics?

IR: A lot of younger people today lived through the ’08 financial crisis. They’ve seen a significant number of scandals from account issues like Wells Fargo’s to hacking like Equifax. It’s difficult when you combine the fact that there have been some very large missteps that have caused people to lose their savings, lose their retirement, their parents to lose their savings, lose their retirement. It’s a distrust combined with a lack of the proper connection method. You’re still in a world where many financial advisory shops or investment banks are not even allowed to be on social platforms. The industry has been slow to adapt to the ways in which young people want to be communicated with and to communicate with each other. People can consider how to do a better job of either saving or spending or managing their money, which I think traditionally has been a very one-sided and uni-directional flow of information prior to companies like StockTwits and the entire financial technology ecosystem.

Ypulse: Why is StockTwits successful at engaging with Millennials when other financial institutions have a hard time?

IR: Our users have fun on our platform. They learn from each other, they find mentors, there’s expertise to be had—but they’re engaging in much the same way that they engage with each other off financial services topics, which is to say socially and by sharing not just text information. I think the way in which people consume has changed significantly. Everything from Amazon to Netflix is based on recommendations. “What are my friends, my peers, doing? What are the smartest people doing? What should I be doing based on what I’ve done in the past?” It’s the fact that this socially native group of people have grown up with this as the expected way to communicate and to learn. In many ways, this is a group of people who are do-it-yourselfers in the sense that they want to learn how to do it, but the tools to learn how to do it are not easily accessible.

What’s in the middle of the extremes of a financial advisor and a discount broker? The answer is something like StockTwits, where we are providing tools and platforms for people to communicate and learn from each other. And that’s the preferable way to do it for socially native people. StockTwits allows a younger generation of people to have those discussions and to have that social interaction, that user-generated crowd-based discussion around, “How should I handle these important challenges in my life? In my financial life?” before making that last decision with transacting. And many of our users transact right from inside of StockTwits. We have a significant number of users that actually trade stocks through StockTwits across five different brokerages that we partner with.

IR: Yes, and increasingly more. We’ve been growing very rapidly, and very rapidly in these younger segments. Almost by definition, many people are first-time investors or first-time learners. People are kind of diving into the StockTwits streams, and reading and learning, and not really discussing. But then they start to engage, and start to play around, and they open their first broker’s account with Robinhood, or Fidelity, or E-Trade, or any of the brokers that we work with. Then they play around with a couple hundred dollars, and then a thousand dollars, and then $2,000 or whatever it is. But yes, a significant percentage of our users are new, and that’s why we acquired SparkFin, because we believe that making the onramp to investing a little bit less steep is a very important thing.

Ypulse: Are there any barriers between Millennials and investing today?

IR: I think there is a fair amount of friction that is now being removed in terms of getting access to the tools and services and information to make informed decisions. Previously a lot of the information that people needed was siloed in investment banks. You’re talking about people on our platform that have account balances that sometimes could be as low as a few thousand dollars. They’re simply not going to get access to information from large investment banks, so I think we and others are able to remove some of the friction around getting access to information. Things like market data are pretty commoditized now, but not enough to learn how to evaluate a stock from a technical perspective if that’s what you’re interested in. Or to understand like, “Why did Twitter’s earnings affect the stock price so much or so little?” To get all that information, to be in that room with people who can explain it to you, I think that has been a challenge for young people prior to companies like StockTwits.

Ypulse: Our research has found that Millennials’ top financial priority is paying off debt and student loans. Do you think they interpret debt, including student loan debt and credit card debt, as a reason they can’t invest?

IR: Absolutely. I think that young people are presented with a very unfortunate choice right now, and I’ve seen this with some of the younger people in my own life where they’re forced to choose between paying down debt and saving for their future, which are like opposite sides of the same coin

But the reality is that Millennials are advancing further in their careers, they’re making more money, they’re finally starting to be able to make the decision to do both of those things at once. It was more of an untenable choice five years ago for the center of that demographic than it is today because the average income of every generation when you move from 18-34 across their own band gets higher. We strongly advocate investing for the future. We think that’s incredible. That said, I would never tell anyone to not pay their student debt.

Ypulse: How does StockTwits make it more accessible for first-time investors?

IR: Because we’re a moderated platform. We’re also very conscious of bad actors. We’ll kick off hundreds of people a week because they’re either trying to pump and dump, or criminally manipulate a stock. We kick those people off almost immediately. We have software that detects those kinds of things so that people don’t get scammed. They don’t lose their money and they don’t get tricked, which is something that no other social platforms for investing can do. We also just keep the conversation civil. There are new people on here, and everybody’s learning. If somebody is behaving in a way that is not conducive to creating that atmosphere, then our team will jump in and say, “Hey, listen, take it easy. We’re learning.” That is a big part of our mission: to make it easy, and to make it pleasant, and to make it fun.

Ypulse: What do you think other financial institutions can learn from StockTwits’s success?

Ypulse: What’s next for StockTwits?

IR: We’re going to continue to build out our network and tools for our most engaged users. For our newer users, we’ll be flattening that onramp. We bought SparkFin earlier this year, and will be launching very soon some tools from that acquisition that will allow users to look at stocks in lists of companies. We are also going to start building some higher value, premium tools so that we provide our user base with trusted ways that they can get advice or get content that we may not be providing ourselves. Those kinds of tools will be available more on StockTwits, and we’re continuing to grow our distribution, the ways in which we engage with people. Our Instagram, for example, is growing 160% a month at this point. We’re just spending a lot of time trying to make the idea of investing and trading more exciting and fun. 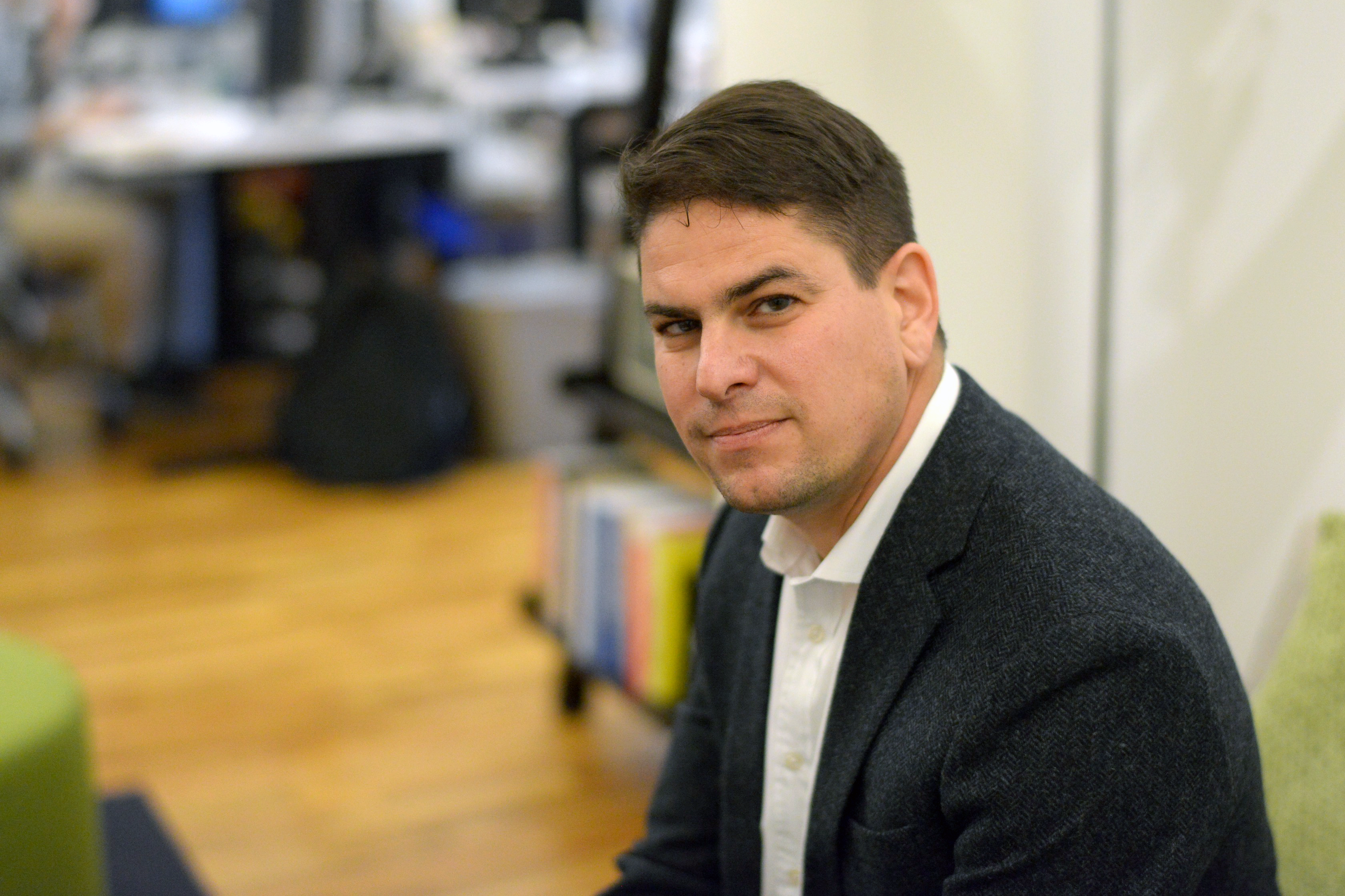 Mr. Ian Rosen has been the Chief Executive Officer of StockTwits, Inc. since July 6, 2016. Mr. Rosen co-founded Even Financial, Inc. and served as its Chief Executive Officer. He served as the General Manager of MarketWatch. He served as Global Director for Dow Jones Investment Banking Solutions since February 2009. Mr. Rosen led product management for information businesses at Fortent, Inc., a financial technology firm. Prior to that, he spent four years as Vice President at Thomson Financial where he helped launch Thomson ONE Investment Banking and was responsible for Investment Banking segment strategy. Prior to that, he held positions at Goldman Sachs and Accenture. Mr. Rosen graduated with highest honors from the University of Michigan, Ann Arbor.