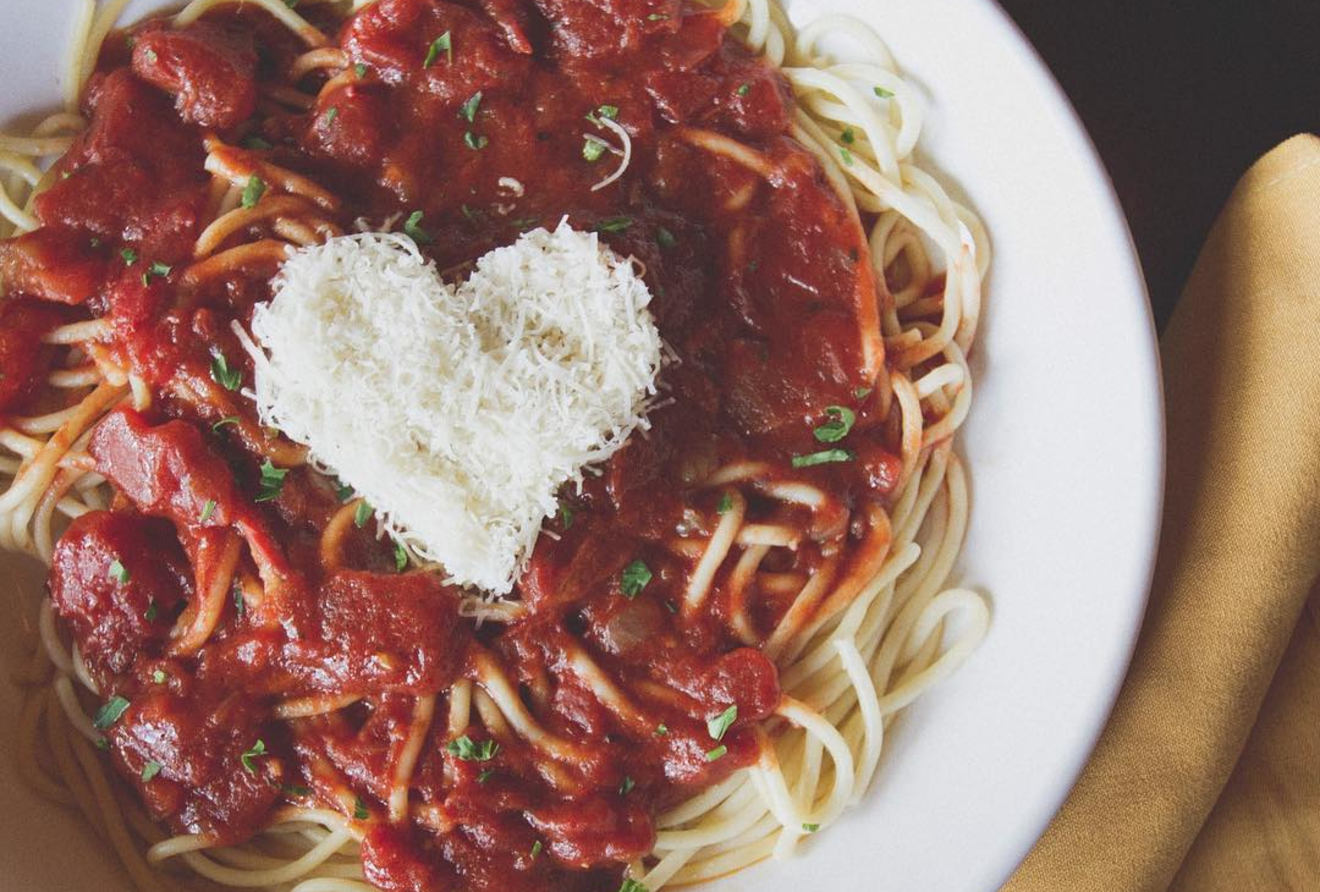 Young consumers continue to spend more than Boomers on dining out, and we asked 1000 13-34-year-olds to tell us their favorite sit-down restaurants to visit…

Dining out (and getting takeout) seems to be one area safe from young consumers’ financial woes. As Eater pointed out, while dining-out expenditures dipped slightly between 2007 to 2008, they quickly rebounded in 2012, even though income levels had not. Although Millennials especially felt the effects of the recession, to get through the financial crises, they opted to consume experiences instead of expensive material goods like houses or cars—giving a new sense of social currency and value to visiting restaurants and other food experiences.

In 2015, JP Morgan found that young consumers were continuing to spend more money on experiences than older generations. When they looked into the purchases from Chase debit and credit cards in 2015, they found that 34% of 19-35-year-old spending was designated to travel, dining, and entertainment, compared to 28% of 36-year-olds and older. Understanding Millennial spending patterns has become even more crucial, as their compound annual growth rate in retail spending is expected to be 15% from 2014-2020, compared to 4% for 35-year-olds and older. Today, the average Millennial is reportedly spending more money dining out than non-Millennials, and 87% say they will “splurge on a nice meal, even when money is tight.”

According to our most recent Ypulse monthly survey, 28% of Millennials and teens are going out to eat dinner at a sit-down restaurant about once a month, and 43% tell us they are going twice a month or more. To find out more about where they’re choosing to eat, we asked 1000 13-34-year-olds, “Thinking about restaurants where the experience is largely a SIT-DOWN RESTAURANT where you order your meal from a waiter, which sit-down restaurant is your favorite?”* Here are their top responses:

*These were open-end response questions to allow us to capture the full range of young consumers’ favorite restaurants. As with any qualitative question, the responses include those that are top of mind and those that are most liked. The lists are ordered according to number of responses received, and alphabetically when ties occurred.

Local restaurants are most likely to receive mentions as Millennials and teens’ favorite places to dine out—by a large margin. As we mentioned last year, young consumers’ desire for unique experiences gives independent restaurants an edge: our trend Unique is the New Cool found that 79% of 13-33-year-olds say they would rather eat at a restaurant that is one of a kind, unlike other restaurants, than one that is consistent like a chain restaurant.

Olive Garden came in second in the ranking for the second year in a row, followed by Applebee’s, Chili’s, and Red Lobster—which, of course, received an affinity boost earlier this year thanks to Beyoncé.

Though local restaurants topped the list for all groups, we saw some slight differences in favorite restaurant brands between males, females, teens and Millennials: 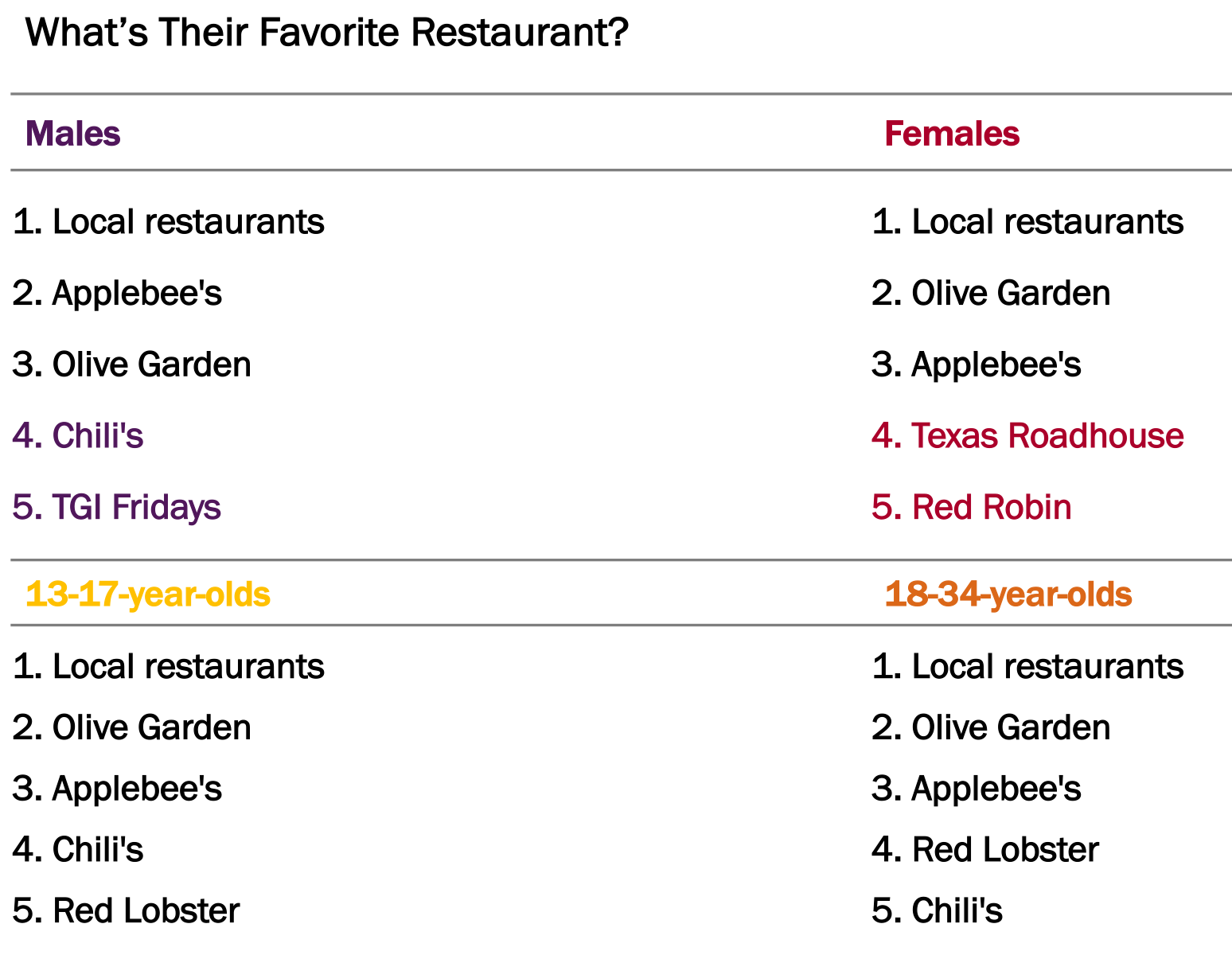 Males and females’ top three restaurants are the same, but males were more likely to name Chili’s and TGI Fridays than females, and females were more likely to name Texas Roadhouse and Red Robin than males. Teens and Millennials’ had far more similar top restaurant rankings, with Olive Garden coming in second for both groups, followed by Applebee’s.