Millennials & Teens Sound Off: The Apps They Can’t Live Without 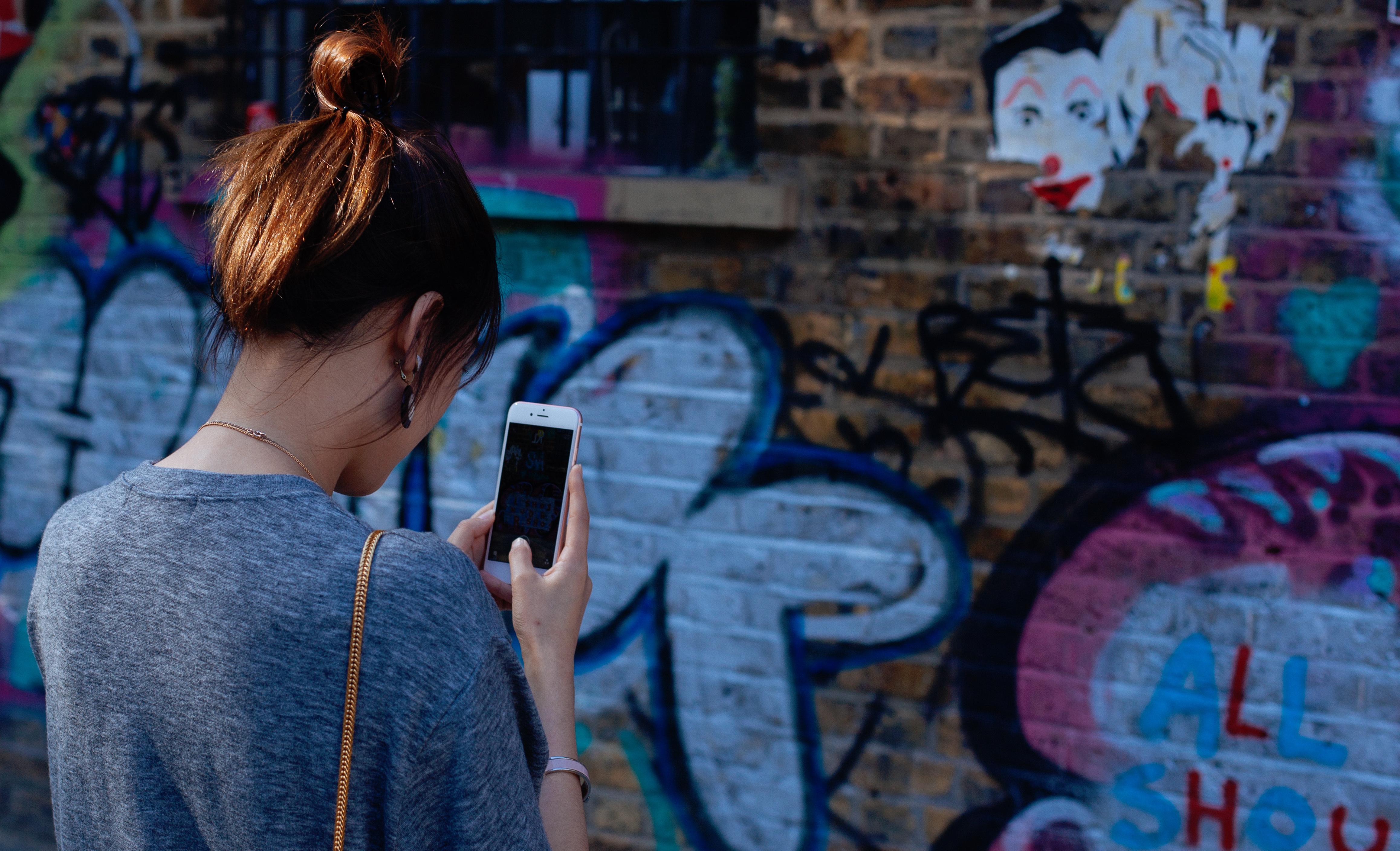 There’s fierce competition to be one of young consumers’ favorite apps, and for good reason. Young consumers are spending a significant amount of time on the apps they like best. Millennials don’t only use more apps than older generations, they’re also spending more time on their top-ranked apps than anyone else. According to comScore data, there are 20 apps that 25% of 18-34-year-olds are using monthly, compared to just 15 among those over 35-years-old. But the top 10 apps among the group are receiving 50% of Millennials’ mobile time, indicating that while younger mobile users have a more diverse range of apps they’re using, their few favorites are still getting the majority of their attention. Our own recent Ypulse monthly survey found that young consumers have an average of about 30 apps downloaded on their phones, with teens reporting slightly lower app downloads, and they’re using an average of seven each day.

We delved further into their app behavior, including their favorite apps of the moment to find out what those go-to apps really are. Pokémon Go, at the arguable height of its popularity, made the top of the ranking, followed by Snapchat and Facebook. But being a favorite is only part of being a part of their daily behavior. Fun ranks high in the list of reasons that they’ll download an app, and boredom is the number one reason they’ll delete one, but solving a problem for them is almost equally important. So in that same survey, we asked young consumers to answer the question, “What is the one app you couldn’t live without?”* Here are the 15 apps that received the most mentions:

*These were open-end response questions to allow us to capture the full range of apps young consumers say they can’t live without. As with any qualitative question, the responses include those that are top of mind and those that are most loved. The lists are ordered according to number of responses received, and alphabetically when ties occurred.

The Apps They Can’t Live Without

Interestingly, Facebook was mentioned most by young respondents as the app they couldn’t live without. At this point, the platform isn’t just a social network for many—it’s where they find news, recipes, keep up with events, communicate with classmates or other parents, find support and get peer opinions and help. In other words, despite all the hubbub about other platforms stealing Facebook’s users and thunder, it maintains its must-have status with Millennials and teens.

The rest of the top 15 apps are a mix of the practical and the fun—again, both are almost equal motivators for young consumers to download. But a few things to point out: Messaging is clearly massively important to young consumers, and if the individual messenger mentions on the list were combined, it might have made the top of the list. At the same time, social media is viewed by many Millennials and teens as a necessity, with most of the major platforms making their list of apps they can’t live without.

We saw the pattern continue when looking at differences between age and gender, but the specific platforms these groups consider must-haves do vary: 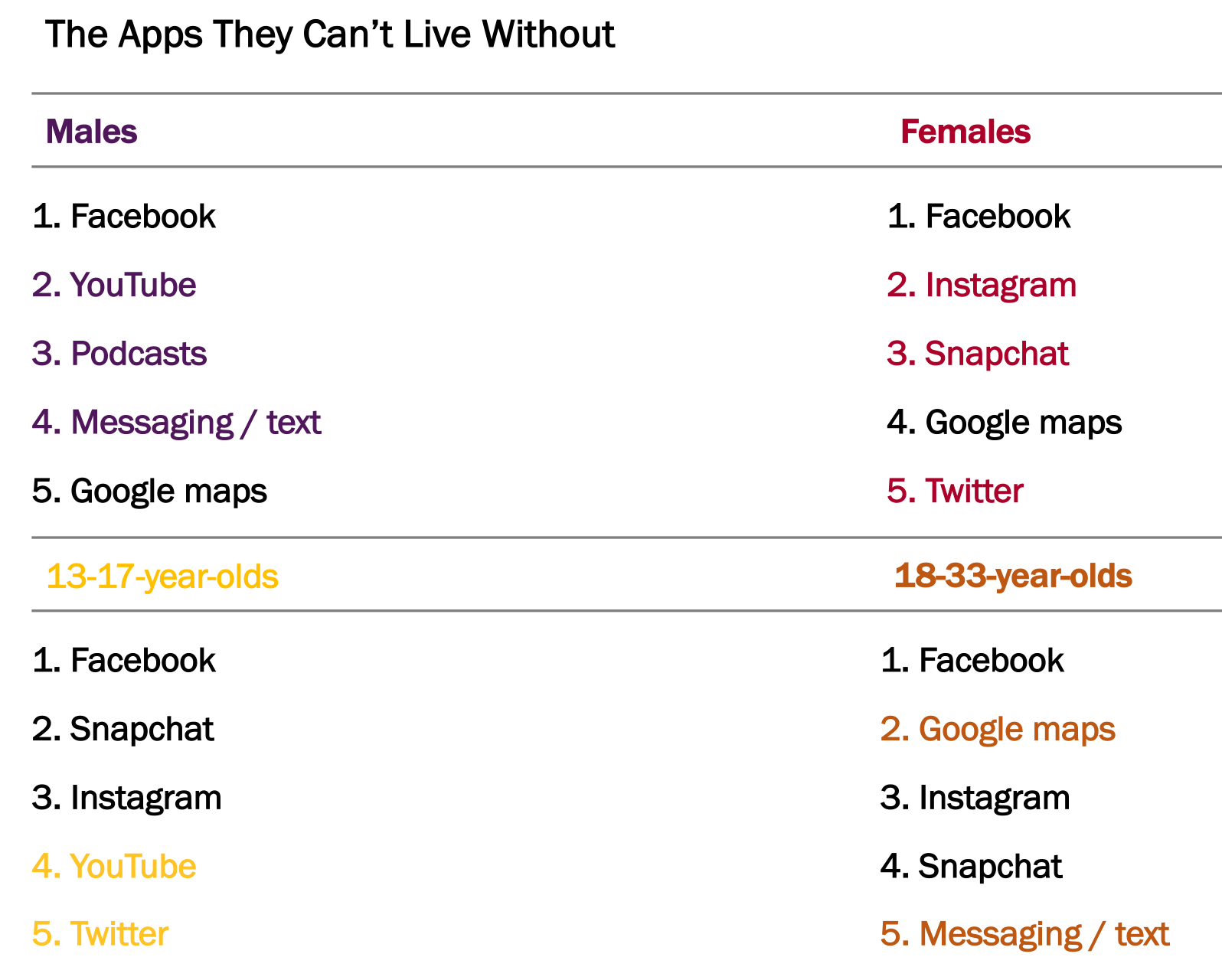 Facebook led the top five list for males, females, teens, and older Millennials. However, the rest of males’ and females’ can’t-live-without-apps are largely different, with females favoring social platforms that focus on sharing, and males more likely to name entertainment apps and smaller communication platforms. Teens and older Millennials had a little more in common, though older respondents were slightly more likely to mention practical, problem-solving apps. Our survey also found that among 18-33-year-olds, email apps are the most used, followed by social media, while teens rank messaging apps as their most used, followed by social media.