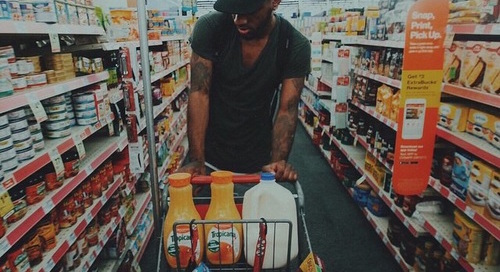 We told you their favorite place to buy groceries, but how are they approaching their walks down the food aisle?

Understanding young consumers’ approach to grocery shopping is becoming more important as more Millennials age up and take on the task. The grocery competition is also heating up as more brands adjust to their preferences. Whole Foods has officially launched their spin-off chain 365 by Whole Foods, created to appeal specifically to young grocery shoppers, with Instagram-worthy décor, prices displayed on digital tablets, a TeaBot and cafe that serves beer and wine. Amazon is introducing their own private grocery label, and some say the move might hit “the sweet spot” for Millennials by selling private label detergent, diapers, coffee, baby food, and more to its Prime consumers.

Grocery brands also need to change their preconceived notions about who is doing the grocery shopping as a new generation takes over. A survey by mobile shopping app Ibotta revealed that young dads are increasingly heading down the grocery aisle. Since 2013, there has been a 62% increase in grocery shopping by Millennial dads, who are spending more time than older dads in grocery stores.

According to our monthly survey, 79% of 18-33-year-olds—and 87% of 25-33-year-olds—are doing the grocery shopping in their household, and almost half of those younger grocery shoppers say they like or love the chore. We told you young consumers’ favorite places to buy groceries, and today we’re breaking down some of the major stats around their shopping, with four charts outlining their grocery behavior. We’ll start with how often they’re actually going to the store:

The majority of 18-33-year-olds who grocery shop are shopping for groceries once a week or less, with only 20% saying they shop more than once a week. Parents are slightly more likely than non-parents to say they are shopping a couple of times a week (25%) and every day (8%) which we can assume is due to the amount of food they are going through and how often they are cooking. A quarter of Millennial parents say they prepare 5 meals a week at home, compared to less than 20% of 18-33-year-olds.

Now that we’ve got them at the store, we can take a look at what aisle they’re spending their time in: 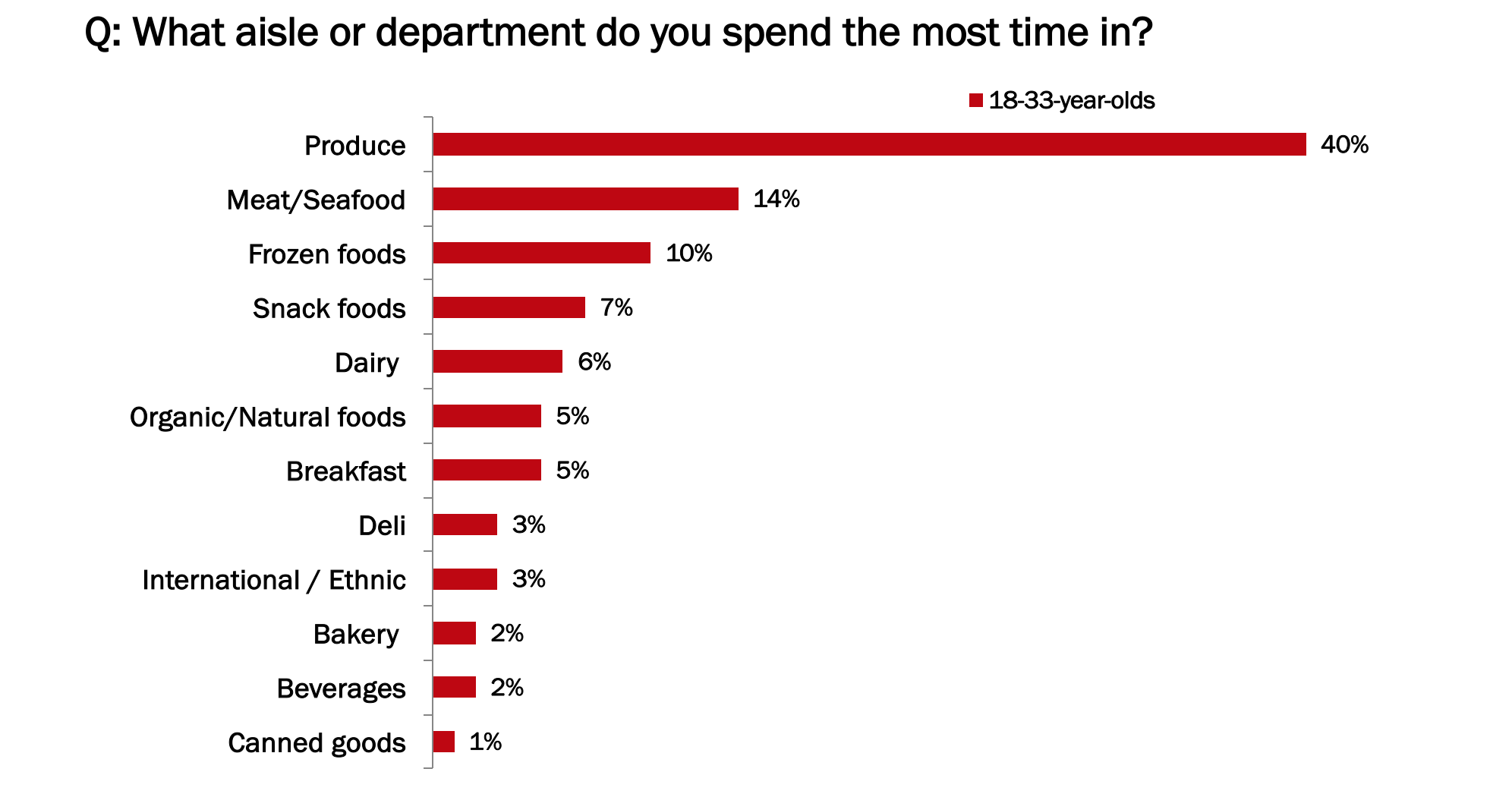 As they’re walking down these aisles, we know that 86% say they are considering price/sales when deciding what items to buy, followed by freshness at 64%. But what labels are influencing their food purchasing? 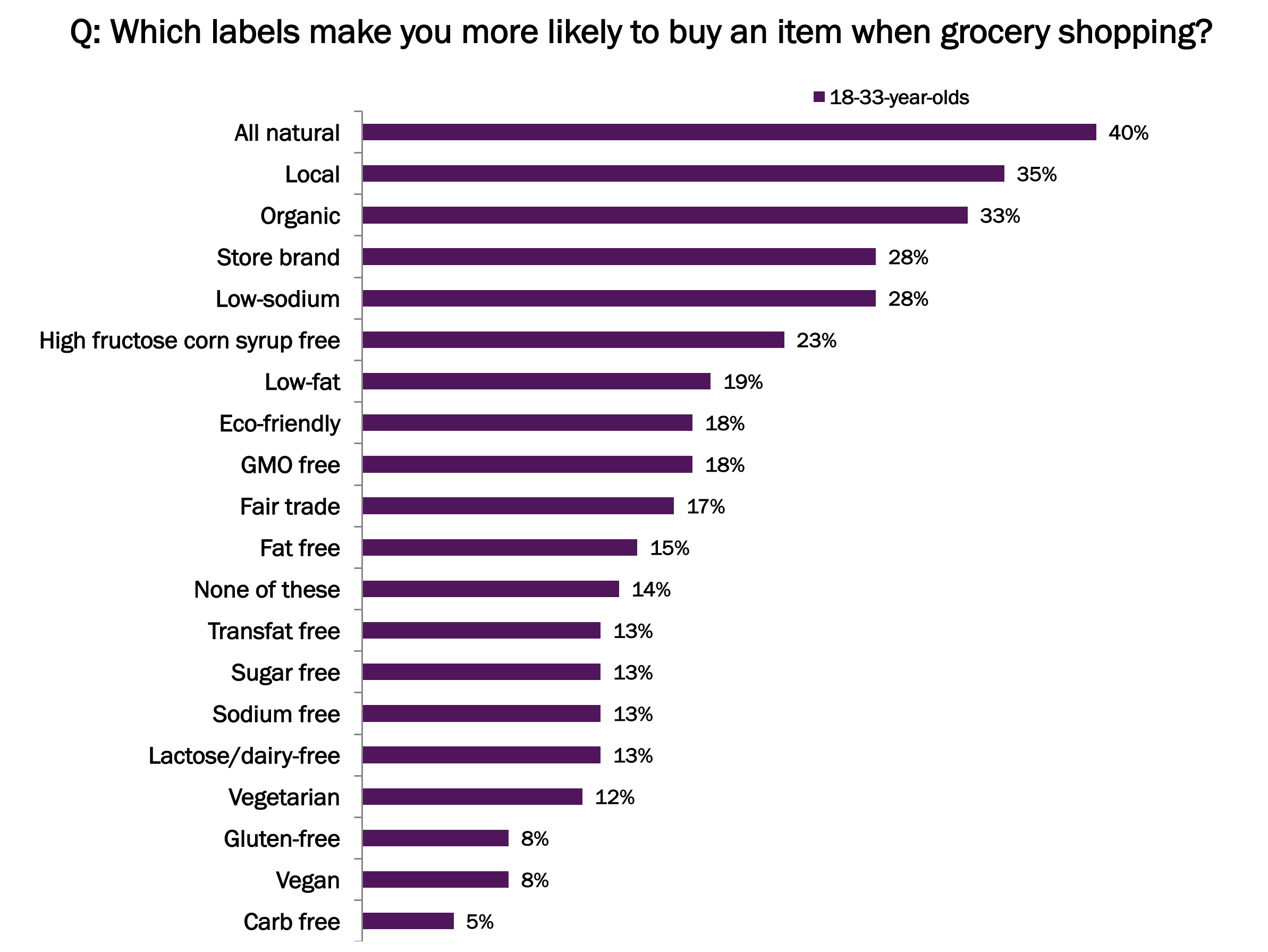 Again, young consumers’ food ethos is clear: fresh, natural ingredients are prized, and these are the labels they’re looking for. All natural, local, and organic are the top three labels influencing their purchasing. Interestingly, diet-related labels like low-fat, and fat-free are much farther down the list, indicating their lack of interest in the traditional diet-food market.

Finally, we dug into their grocery shopping approaches overall, including how they prepare for a trip to the store and what their shopping preferences look like:

Millennial grocery shoppers are planning their trips, with the majority saying they like to make a list, and that they try to do their shopping all in one trip—which explains the lower number of those who are visiting grocery stores multiple times a week. But one big narrative about young consumers’ grocery habits isn’t necessarily reflective of their actual shopping behavior: only 10% say they buy their groceries online, compared to over 84% who say this does not describe them. One 25-year-old male told us, “I’d rather grocery shop in-store, because you can’t touch or feel the food online.” While we expect the number of online grocery shoppers to grow as options become more convenient and quality more reliable, for now they’re still thinking of groceries an in-person purchase.