How Fans Became the New Boss: 5 Questions With Viacom Lab 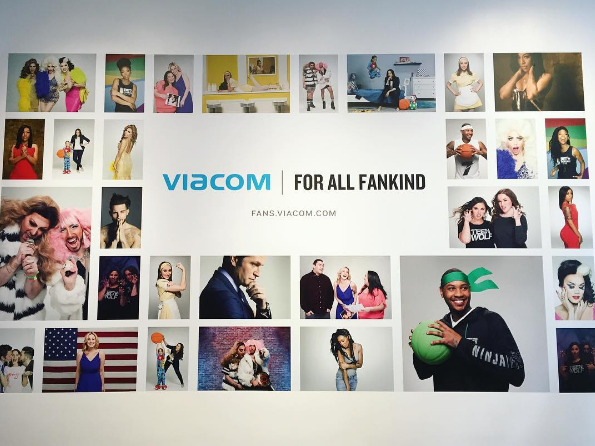 Keeping fans happy has become increasingly important for brands. We talked to Viacom’s EVP of Marketing Strategy and Engagement about the recently launched Viacom Lab to find out how fans became the boss, and where the future of fan engagement is heading…

Catering to fans has become a must for brands. While content used to be a top-down delivery system of source to audience, social media has made entertainment a discussion, and empowered fans to speak their mind and demand things they never would have before. As fans’ voices have gained strength, being a devoted fan of entertainment content has become more common for young consumers. This year, when we revisited our Next Level Fandom trend we found 45% of 13-33-year-olds say they are in a fandom—an increase of almost 10% from 2013. Armed with their strength in numbers, fans have become highly influential and gained the power to drive content and make demands to the gatekeepers of their interests.

At Viacom, fans are called “the boss,” and the brand recently launched a new venture to inspire and empower the future of fan experience and engagement. According to Executive Vice President of Marketing Strategy and Engagement Ross Martin, the Viacom Lab will be “delivering breakthrough new content for…audiences, everywhere they are,” and will allow “visionary creative talent to bring their biggest and best ‘fans first’ ideas to life in powerful new ways.” Current projects range from exciting offline experiences to platforms where fans can continue to create and engage in real time. We talked to Martin to find out why the Lab was created, the importance of fan engagement, and what all brands should know about their fans: 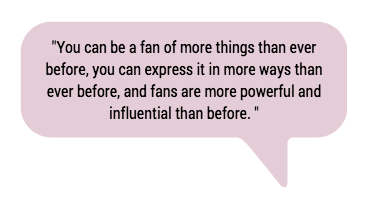 Ypulse: How would you define fan engagement?

Ross Martin: Fan engagement has changed quite a bit over the last 10 years, and it continues to evolve rapidly. You can be a fan of more things than ever before, you can express it in more ways than ever before, and fans are more powerful and influential than before. So we define fan engagement in lots of different ways and we study it religiously. What we learn from our fans is what helps us make better decisions in serving them. It’s different for all of our brands and all of our content.

YP: What would you say brands should know about their fans?

RM: We know more than ever about our fans, and every brand in 2016 should be able to say the same. Fans are loud and clear with they want and what they hope for, and our job is to to deliver for them. The brands that create content and experiences that surprise and delight their fans are the ones fans have a visceral connection to. What I think is most important is you never stop earning their love and attention, so everything we do every single day is in service of our fans. The brands that are most successful are obsessive about studying, understanding and delivering for their fans.

Their expectations are higher than ever, as they should be. They want more of what they love, where they want it, when they want it, how they want it, and they expect us to deliver that, and we do. YP: Is fan engagement becoming a bigger part of marketing?

RM: I think it’s the biggest part of marketing. Everything we do here at Viacom we do for our fans, and they’re the boss. We report to our fans, so what we’ve seen, and there’s a recent Comedy Central research study on this, is how fans have moved from viewers to users. How they’ve moved from passive recipients of content, to active users of the shows and content that they love most. They’re are using our content in lots of different ways and they are inspiring action. Whether that’s the fandoms created around our characters and shows, and fan fiction that our shows inspire, the boundaries of creative expression inspired by our shows are limitless and we’re seeing fans doing the most extraordinary things in expressing their love for what our channels make. I’ll give you an example: there’s a couple that got married in Arizona a few months ago and they just never stopped loving the Teenage Mutant Ninja Turtles from when they were younger. They reached out and said, “Look we really want to theme our wedding inspired by the Turtles, can you help us out,” and we said, “of course.” We sent them handmade Turtle cufflinks, Turtle bandanas and masks. They’re grown-ups, and they wanted the world of the Turtles to be the theme of their wedding. We see extraordinary examples of fandom like that everyday, all over the world, and it’s extraordinary and inspiring to see the reactions. I was downtown at the secret Turtles lair which we recently put up on Airbnb—it’s a partnership between the Viacom Lab, Nickelodeon, and Paramount Pictures—and the look on the face of every kid that sees it for the first time makes everything we’re doing worthwhile. When you see the surprise and the wonder and the joy of fan stepping into in real life what only existed before on their screen and in their imagination, you see the visceral connection that our fans really have with our characters and our stories. 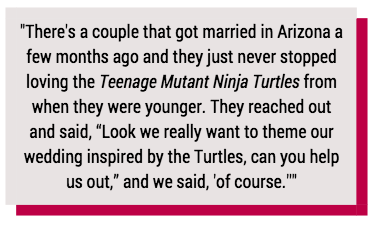 YP: How much influence do fans have over the kind of content that Viacom creates?

RM: Fans have more influence than ever before over creators, over brands, and over other fans. Their collective power can force change of all kinds, not just in entertainment. When it comes to entertainment, we’re in the business of responding to what our fans want and what they need. A good example of that is Nickelodeon recently launching The Splat. The Splat brings back so many of the animated shows on Nickelodeon they grew up with, and fans missed and wanted more of them. So Nickelodeon bought shows like Ren and Stimpy back for fans who never stopped loving them, because the fans demanded it.

YP: Can you tell us some projects you are excited about at the Viacom lab? RM: I’m super excited about the [Teenage Mutant Ninja Turtles] lair as our first example of how we are going to bring our fans new experiences in real life. It’s inspired by the shows and characters that they love, so that’s a tremendous hit and it’s been super well-received. In fact, we made more nights available on Airbnb and within about a minute they were gone, so we’re seeing engagement levels at all-time high for real life experiences inspired by the content from our network. Another example of the Lab’s work, which I’m really proud of, it our partnership with GIPHY—look for some of the exciting announcements about the new kinds of storytelling formats and experiences that GIPHY and the Lab will be bringing to our fans.

I’m also super excited about our creators in residence, who are extraordinary leaders in their fields, who are inspiring to think in new ways and try things that have never been tried before. One example would be Beau Lotto, who is neuroscientist from the UK. He’s living in the Lab, and we work with him everyday and study how the brain processes content and experiences, and how we can learn more about perception. Together we’re building on his augmented reality social platform, called Traces. Traces was launched in beta, you can download the app. It’s an augmented reality platform that allows users to drop content of any kind, anywhere in the world using GPS, and allow for their friends to discover that content and download and experience it. It’s a remarkable start, we super-psyched to work with Beau on that and more to come. The creator and residents program is really teaching us a lot on how to work with visionary leaders in lots of different fields in brand new ways. 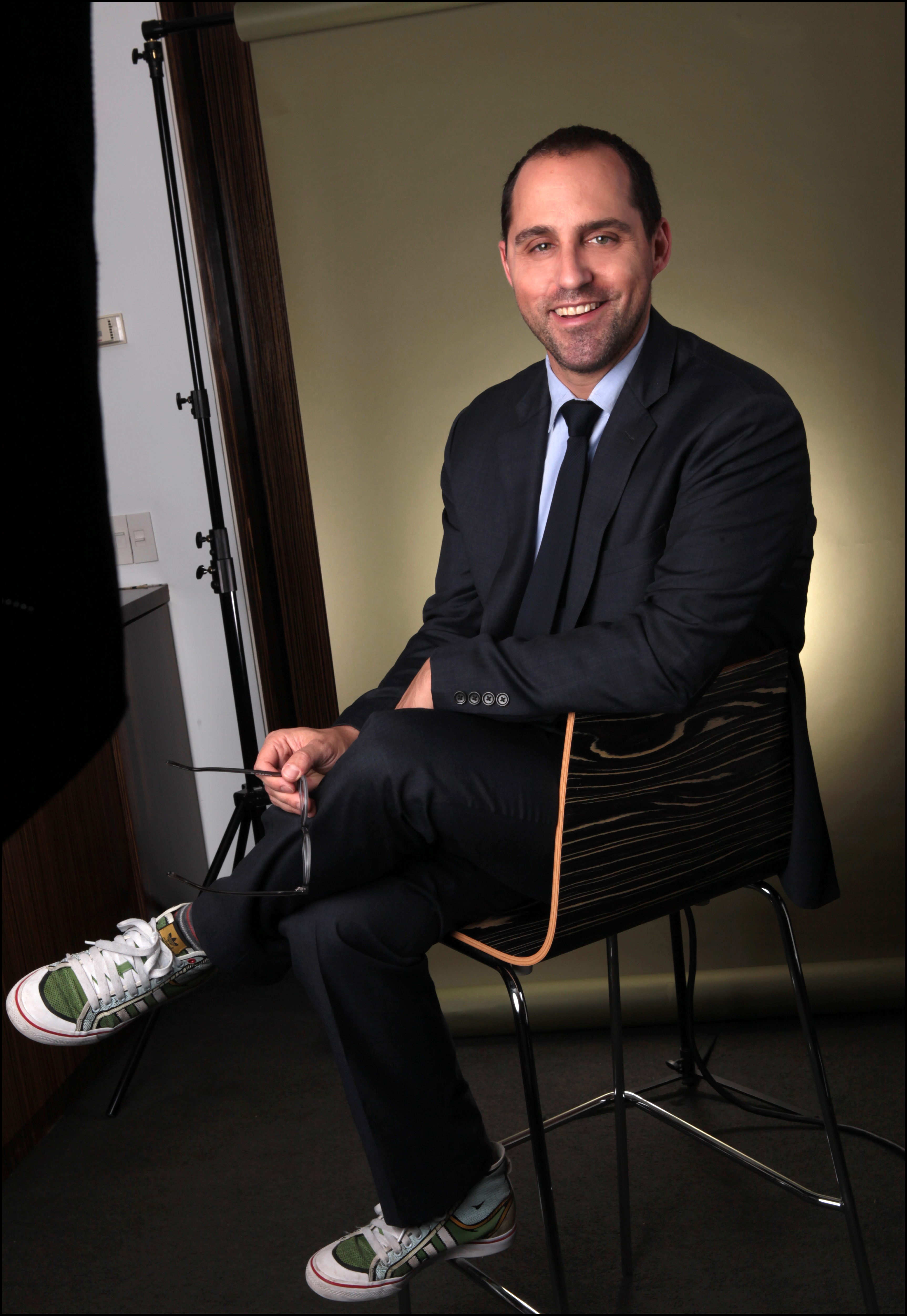