Millennials & Teens Sound Off: Their 15 Favorite Brands on Social Media

Who’s winning the social media race for young consumers’ likes? We asked 1000 13-33-year-olds to tell us their favorite brand on social to find out…

In just a few years, social media marketing has gone from the work of an intern to the main focus of any brand that wants to appeal to Millennials and teens—and it’s a space that is constantly shifting. Social efforts are also shifting how young consumers feel about brands. A recent study found that 62% say they are more likely to be a loyal consumer if brands engage with them on social networks, and 33% of Millennials will check out a company’s blog before purchasing from them. In January, a report found that teen-targeted retail brands are shifting their social media strategies away from Facebook and onto Instagram, due to the ability to curate user content, the shoppable feeds feature, and positive correlation between frequent posting and high engagement. It’s a constant race to find the platforms and tactics to appeal to young consumers on the sites and apps they’re spending so much time on. But who’s winning?

In Ypulse’s most recent monthly survey, we explored Millennial and teens’ social media behavior—from the platforms they like using the most to what they post and who they follow. In that survey of 1000 13-33-year-olds, we found that 68% have friended or followed a brand on social media, and 21-24-year-olds were the most likely to follow brands, with 77% saying they do so.

Having young consumers’ actively opting in to brand content is a big deal for several reasons. This is also a generation that tells us again and again that they are actively trying to ignore most advertising—they’re fast forwarding the commercials, using ad blockers, and hitting the “skip” button as fast as they can on pre-roll. So if a brand is able to appeal to them enough that they actually sign up to have that brand’s messaging as a regular part of their day, it’s a huge win. On social media, the consumer is in charge of the more of the marketing they see—they can opt in and opt out of your content in a second.

We asked 13-33-year-olds to answer the question “What is your favorite brand on social media?” and uncovered their top 15: 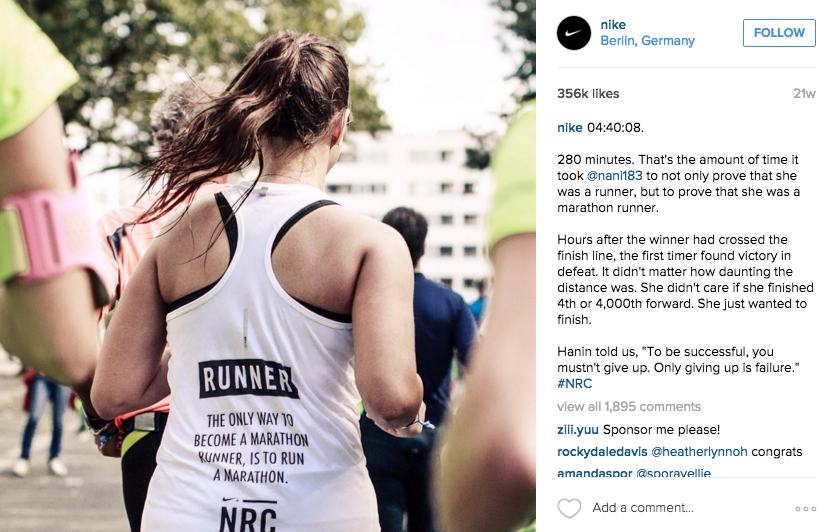 Nike was far and away the social media favorite, with 10% of respondents naming the brand. Target and Taco Bell landed second and third place respectively. We should note that responses for this question were especially varied—there was not much consensus—which might make Nike’s win here more impressive. Nike, which has 38.3 million followers on Instagram and 5.3 million on Twitter, was included in our post Secrets of the Most Followed Brands on Instagram, where we said:

Nike’s Instagram has more followers than any other brand… Business Insider describes the brand’s images, which vary from running on a snow-covered street to surfing on a beach, as “an inspirational poster, except not lame.” The emphasis here is on inspiring and storytelling. Nike’s Instagram feed is a healthy mix of professional athletes and everyday athletes, whose faces are often partly obscured. The inclusion of a wide range of individuals, men and women, kids and adults, swimmers and runners, allows followers to feel they too could be a part of the culture Nike is creating. Though product is obviously featured, each image feels like a snapshot of a larger narrative—not necessarily of an ad.

Nike also does what not many brands would be able to, creating silo-ed feeds for specific groups. Their Instagram accounts include @nikewomen, @nikerunning, and @usnikefootball, which each post content for those interest-specific groups. 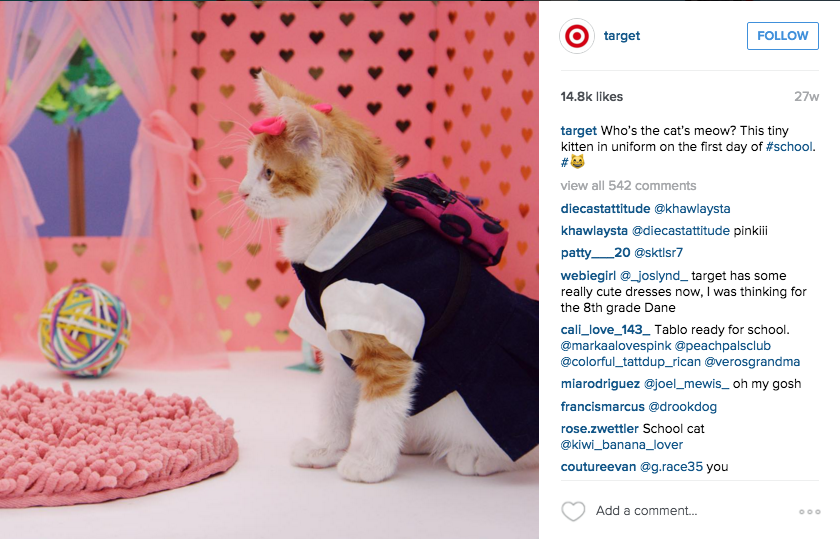 Having fashion and retail brands at the top of the list makes sense when you consider that retailers make up more than half of the top 15 list. The industry has been somewhat ahead of the game in utilizing platforms to appeal to young consumers, and their products are more easily tailored to visual sharing than some other industries. Target’s Instagram is a stream of visually captivating images and videos filled with their wares arranged in highly-stylized and bright scenes. Their Twitter feed offers followers alerts on deals, and exclusive content—like an early look at their Marrimekko collection. Content is specific to each platform, and tailored to the way that followers use the network. 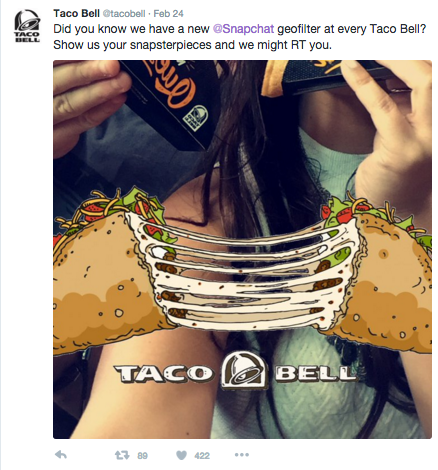 Our third place brand, Taco Bell, has put significant effort into becoming a Millennial favorite. Digital has been a huge focus for the brand. To celebrate the creation of the taco emoji they launched one campaign that is tailored to Twitter, and yet another that’s made for Instagram. Fans could tweet at the brand with the taco emoji and another random emoji of their choice to be sent back an image or GIF that mashes up the two in a creative way. Meanwhile, new limited-edition “taco holsters” in-store were designed to be Instagrammed. On an average day, Taco Bell’s Twitter is full of fan retweets, spotlighting authentic and organic buzz about the brand. They’ve also been quick to play on Snapchat, where they’re currently offering new geofilters at every restaurant.

The top three favorite brands on social media have something in common: they are careful to create ad content that unique to the specific platforms they’re on, and pay attention to their followers and fans to both spotlight them and provide valuable contributions to their feeds.