What Millennials & Teens Have Planned for 2016

New Year, new you! We’ve given you the predictions on what 2016 holds for brands, but what does the next year hold for Millennials and teens? We wanted to know their goals for 2016, so we dug into our December survey data to find out their resolutions and hopes for the coming months. 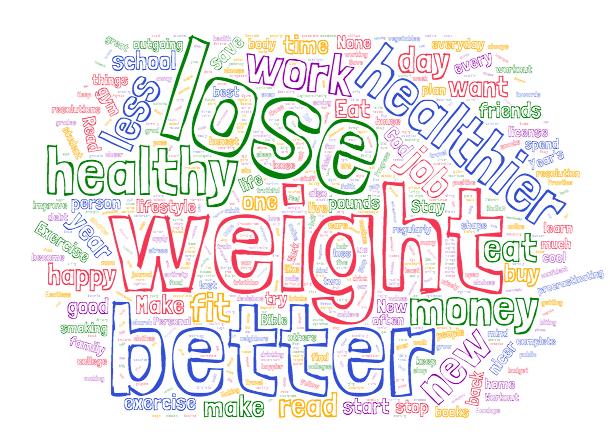 More than half of 13-33-year-olds told us they had or would have a resolution for the year. We asked them to tell us what those resolutions were, and their open-end responses told us that like so many, fitness and health are top of mind for them at the start of the year. Words like, “weight,” “healthy,” and “lose” appeared most often. However, their focus isn’t just on losing weight or “getting ripped,” with many responses simply stating they aim to “be healthy.” A look at the categories they told us their resolutions fit in best reveals more: 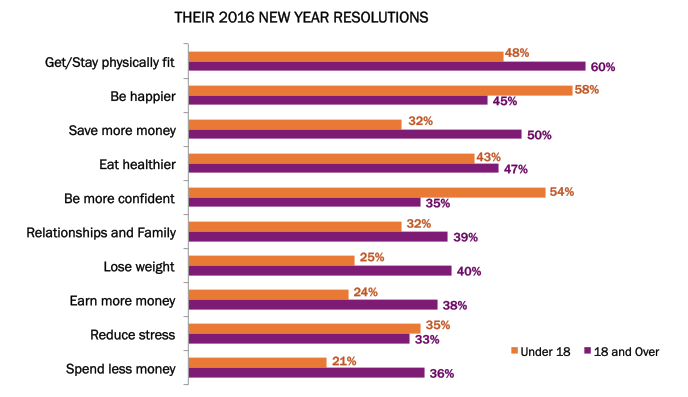 Overall, “losing weight” as a resolution went down from 47% in 2014 to 36% in 2015, and “get/stay physically fit” went up from 47% in 2014 to 57% in 2015, and physical fitness is a more popular goal than weight loss among both 13-17-year-olds and 18-33-year-olds this year. This could be an indication that the Fit Gone Glam trend will only grow in the next 12 months, and our prediction that calorie counting will be less important than clean eating is likely true.

Comparing teens and older Millennials resolutions, we can see that finances are more likely to be on the mind of 18-33-year-olds, while emotional resolutions are more common for teens. 50% of 18-33-year-olds chose “save more money,” a 19% increase from the 2014 data, and many open-ended responses, like the following from a 27-year-old female: “My 2016 new year resolution is to pay off my largest student loan,” reflected that goal. A PricewaterhouseCoopers survey revealed that individuals born between early 1980s and mid-1990s have the “lowest level of financial literacy,” and 41% of 18-to-34-year-olds recently polled by Bank of America and USA Today claim to be “chronically stressed,” when it comes to money. Financial institutions need to catch on to the marketing tactics that will appeal to this generation, like going digital and making transactions seamless with mobile apps , because our statistics are revealing that Millennials are wising up and want to be financially stronger for 2016. Earning more money also went up to 38% for 18-33-year-olds in 2015 from 29% in 2014.

The fact that the top resolution for 13-17-year-olds is “be happier” could be further evidence that being a teen is harder than ever. A private counseling hotline for teens and children revealed that there has been a significant influx of calls—35,244 in the last year—made regarding general unhappiness, mostly triggered by internet use. Experts blame “social comparison,” a recent phenomenon where individuals “determine [their] own social and personal worth based on how [they] stack up against others.” According to our recent Social Media Illusion trend, 56% of females 13-33-years-old say they compare themselves to the people they follow on social media.

We also asked Millennials and teens to tell us what they hope to accomplish in 2016:

Interestingly, almost the same number of teens and older Millennials hope this will be the year they move out of their parents’ homes, indicating that the goal of living on your own is a long-term one for this generation.