Millennials & Thanksgiving: 5 Stats to Eat Up 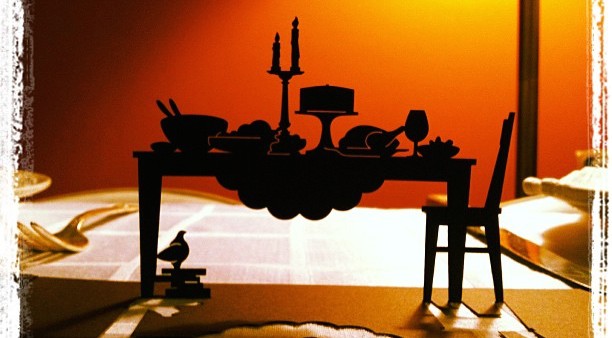 How will Millennials be celebrating turkey day? We’ve got the stats on their plans…

Turkey day is almost here! With more Millennials starting families, and earning more, their holiday preferences will matter more and more. In our last monthly survey, we asked 13-33-year-olds how they’ll be celebrating Thanksgiving, to get the full dish on their hosting, viewing, travelling, and spending plans. Here are five stats to know: 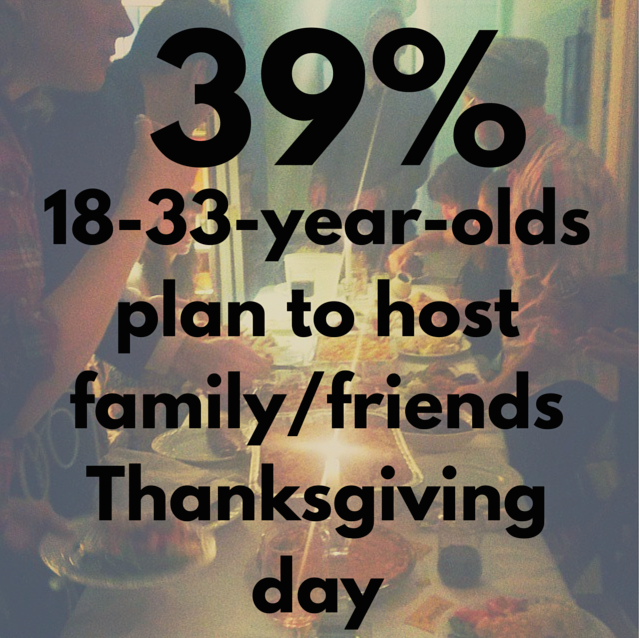 1. One out of four 18-33-year-olds plan to host family/friends Thanksgiving Day.

They’re not sitting at the kids table anymore. Every year, more Millennials are hosting their own Thanksgiving celebrations, and creating their own traditions. For turkey day 2015, 39% of 18-33-year-olds say they plan to host Thanksgiving, Not surprisingly, Millennials with children are even more likely to host, with 45% of parents 18-33-years-old planning to. So, what does it matter? Brands with Thanksgiving marketing need to start thinking of Millennials as a main target. 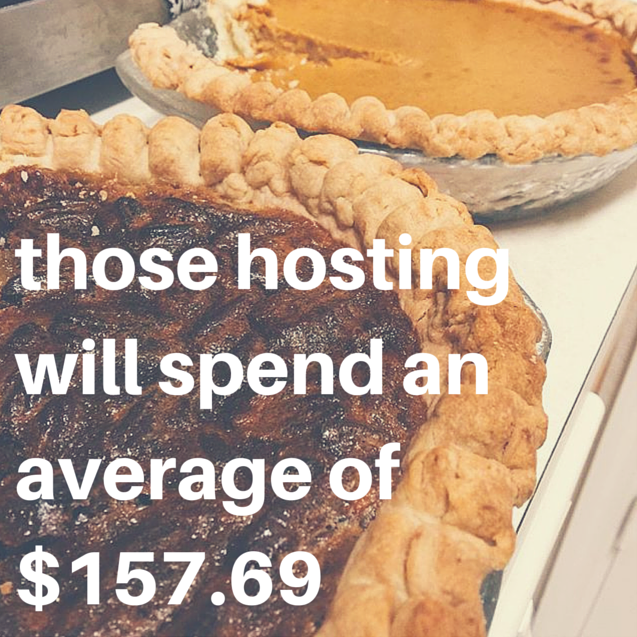 2. Those hosting will spend around $158 on their Thanksgiving festivities.

If they’re playing host, knowing what they’re planning to spend is the next important step. We asked those who are hosting family or friends on Thanksgiving how much money they’ll be spending, we found they’re planning to shell out around $158. But older Millennials forecast that they’ll spend more, with 30-33-year-olds saying they’ll spend $209.50. As Millennials age up, their budgets, or planned expenditures, for holidays are increasing. 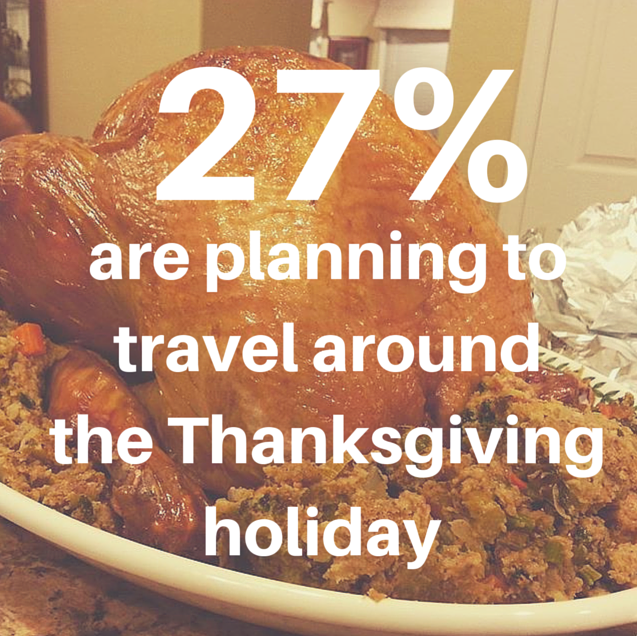 3. More than a quarter say they’ll be traveling around the Thanksgiving holiday.

Those who aren’t spending to host their Thanksgiving gathering very well may be spending on Thanksgiving travel instead: 27% of 18-33-year-olds say they are planning to travel around the Thanksgiving holiday this year. We’re not just talking about college students coming home for dinner, while 25% of college students are travelling for the holiday, 29% of those not in school and 30% of 25-33-year-olds say they’ll be travelling as well. Almost 20% of those not in college say that travel is for a vacation. 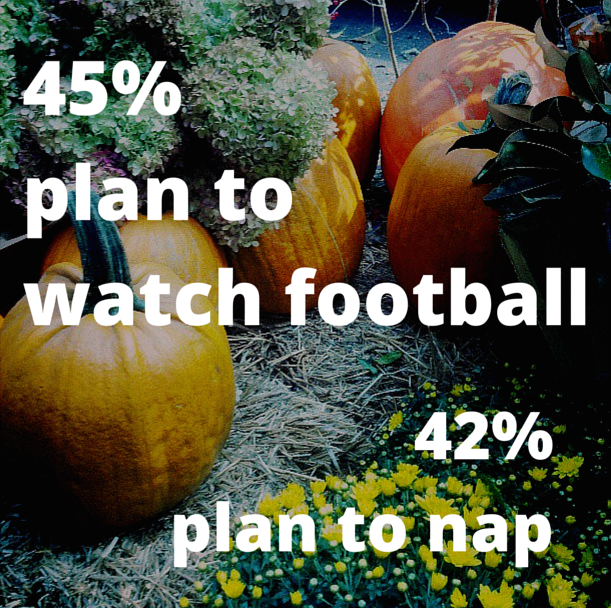 4.  Almost half will watching football on Thanksgiving day—and almost as many say they’ll take a nap.

Millennials may be changing some traditions, but football is still a big part of their November holiday: 45% of 13-33-year-olds plan to watch games on Thanksgiving. That viewership is majority male, with 55% of Millennial guys saying they’ll be watching football, versus 35% of Millennial females. As with so many generations before them, more of the ladies will be in the kitchen: 77% of females say they’ll be cooking/baking on Thanksgiving, versus 59% of males. (We should note that that’s still a majority of Millennial men who will be making turkey, sides, or pies.) Clearly that football and cooking will be making them tired: 42% plan to take a nap that day. 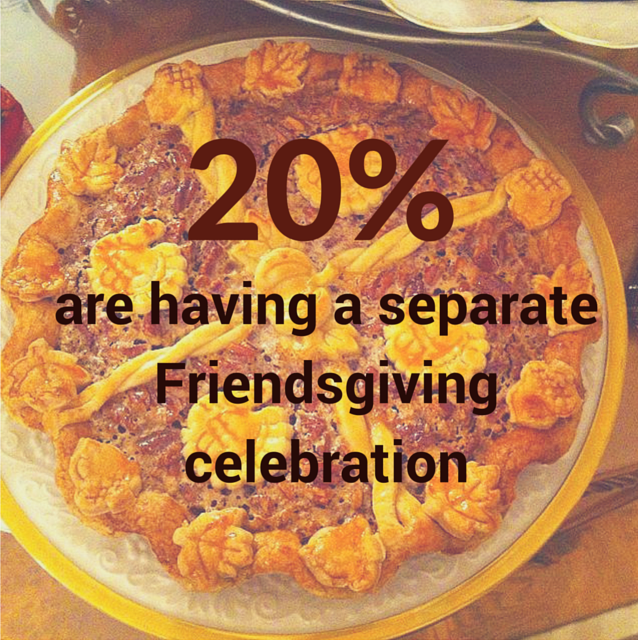 5. The Friendsgiving trend is staying steady, with 20% saying they’ll have a separate Thanksgiving meal with friends this year.

As we’ve been tracking the last few years, Millennials in the U.S. are embracing a new version of the fall tradition, gathering with friends for their own turkey feasts and creating their own holiday in the process. The new holiday has taken over college campuses and urban friend groups alike, and is starting to become an important ritual for many Millennials. This year, 20% of 13-33-year-olds say they’ll be having a Friendsgiving celebration. Interestingly, the number of Millennials celebrating Friendsgiving increases with age, and 30-33-year-olds are actually the most likely to say they’ll be having the friends version of Thanksgiving.