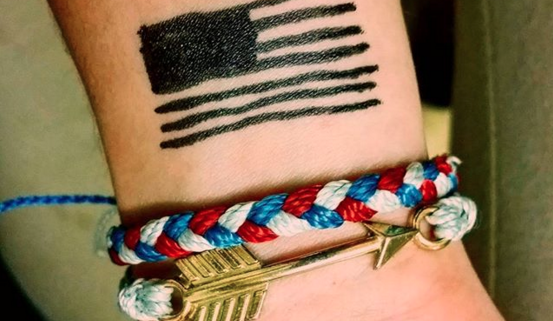 In our most recent nationally representative monthly survey, we asked 740 Millennials who plan to vote in 2016, “If the election were held today, who would you vote for?” Here’s the breakdown of the presidential candidates young voters are currently supporting: 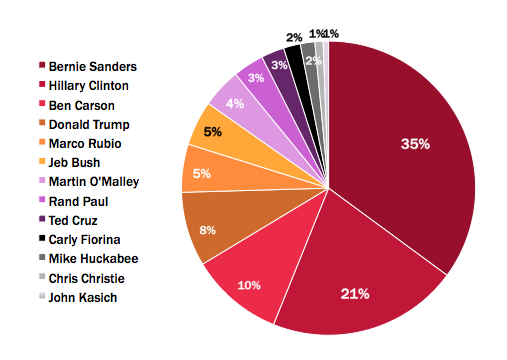 Our informal poll indicated it last month, and now it’s official: Millennial voters are feeling the Bern. Sanders has the support of 35% of Millennials who plan to vote and Hillary is in second place. No other candidate thus far comes close to either of the two Democrats.

Considering this, it’s not surprising that the majority of Millennial voters (59%) currently say they’ll be voting for a Democratic candidate, again indicating that Republicans, no matter which of the many candidates they decide on, will have their work cut out for them if they want the power of Millennial voters.

To get a more nuanced look at who Millennial voters are supporting, we also compared male and females: 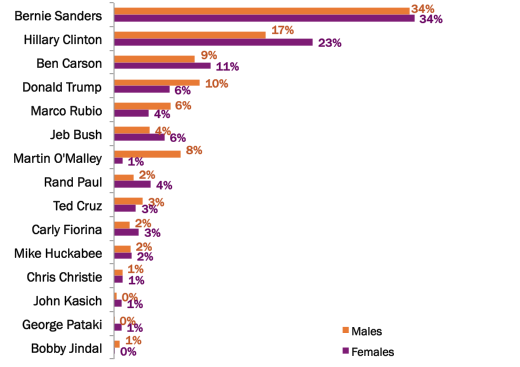 Bernie Sanders has an equal number of male and female Millennials supporters. Meanwhile, while Millennial females are more likely to say they’ll be voting for Hillary, her lead is likely not as high has her campaign would like. On the Republican side, Donald Trump and Marco Rubio have more male supporters than female.

When we look at current Millennial voter preferences broken down by ethnicity, Bernie is still the clear winner amongst Caucasian, Black, and Hispanic young voters: 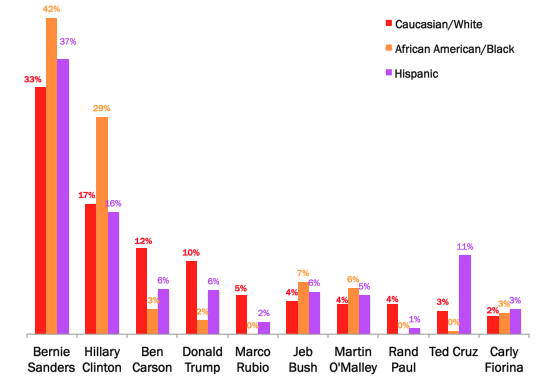 Black Millennial voters are leading the support for both Sanders and Clinton, while Caucasian Millennials are more likely to say they’ll vote for Carson and Trump than the other ethnicity groups.

We’ll continue to keep tabs on the candidates that Millennials are supporting as the race runs on, and there are fewer candidates to choose from.