Millennials & Teens Sound Off: Their 10 Favorite Sports To Watch

The top sports that Millennials and teens love to tune in for might surprise you.

We surveyed 1000 13-32-year-olds on the sports they watch, to find out how often Millennial and teen fans are tuning in to sporting events, what they’re watching, and what they’re favorites are. According to our monthly survey, 32% of young viewers are watching sporting events on a monthly basis, with 16% tuning in a few times a week:

So what are they watching? When we look at the sports they say they’ve watched over the last two years, football tops the list for both males and females: 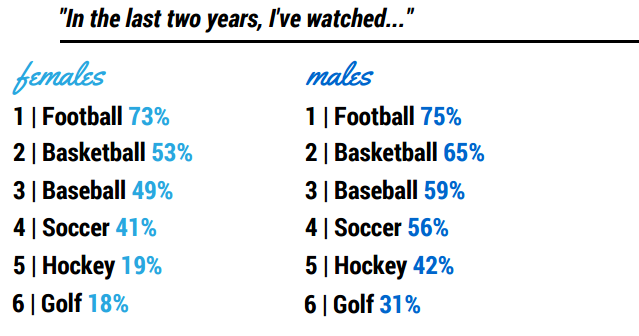 Hard to see past the top five, isn’t it? That’s because football and college football received by far the most responses, over double the amount that number two sport basketball received. So though there are hints that football might be having difficulties retaining some Millennial fans, it is still the majority’s favorite sport to tune into. Basketball ranks as their second favorite, and soccer comes in at number three, ranking above baseball.

We’ve begun to see the impacts of soccer’s popularity among younger viewers, and their favorite sports to watch list indicates that longtime U.S. standbys could be losing ground to futbol. According to some marketing experts, soccer has become a “juggernaut” in the U.S. among younger viewers, prompting some brands to move advertising money into the sport. Heineken, which recently became the Official Beer of MLS believes, “’the Millennial consumer and really the Mexican Hispanic consumer love the sport and [we] will continue to see it grow.’” In fact, a 2014 ESPN poll found that soccer is 18-34-year-olds second favorite sport, after football. However, our survey found that basketball is safely in second place among Millennial and teen viewers. Here are their top nine favorite sports to watch, with football removed to make things a bit more clear:

Here, it’s easier to see the top ten list after football: baseball, hockey, gymnastics, tennis, WWE/wrestling, MMA (Mixed Martial Arts), and track/running. Some might be surprised by the inclusion of wrestling and MMA, and brands should note that these are potentially growing areas with appeal beyond a niche audience.

But some of the most interesting things about this list are the sports that don’t make it. Golf and Nascar are both missing from their top ten favorites to watch, reflecting the struggle that both brands are having attracting Millennial viewers.

*These were open-end response questions to allow us to capture the full range of Millennial and teens’ sport viewing favorites. As with any qualitative question, the responses include those that are top of mind, and those that are actually most loved.

The Netflix Effect: How The Streamer’s Shows Create Viral Products
Netflix is becoming a force behind some surprising product sales. Here’s how the stream...
Gen Z Is Cancelling Side Parts & Skinny Jeans, & Millennials Aren’t Happy on The Viral List
Gen Z & Millennials are sparring over hair parts and jean styles, a feta dish might...
3 Marketing Lessons from the 2021 Super Bowl
From memes to anti-ads, last night’s big game was full of lessons on marketing to young...