They’re passionate fans, and they’ve shifted the way the industry works. We asked 1000 13-32-year-olds about their music tastes, behaviors, and preferences to see the role that music really plays in their lives.

Streaming services, favorite artists and genres, purchasing vs downloading…there’s a lot to know about young consumers and how passionately they feel about music. We told you all about Millennials and teens’ favorite artists, but that’s just a small portion of their music relationships and behavior. In that same survey, we asked 1000 13-32-year-olds a slew of questions about where they’re getting their music, what role it plays in their lives, and more. Listen up: here are three stats on Millennials and teens music obsessions to know. 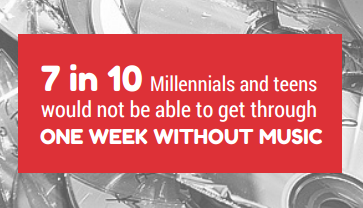 That number goes up to 77% for females, and 76% for 13-17-year-olds. When we look at the responses of different races, African American/Black respondents are the most likely to say they couldn’t make it through a week without music, with 81% saying so. This isn’t the only indication we have of the vital role that music plays in young consumers’ lives: 80% agree that music is an important part of their life, and 59% say that music is a part of how they define who they are.

2) 79% say their tastes do not fall into one specific music genre.

It seems that Millennials are a genre-less generation. We saw this reflected in their favorite music artist responses. The majority declare they don’t have a favorite, or that they can’t choose. As we’ve mentioned before, it isn’t because they don’t care, it speaks more to the fact that this generation is interested in so many music genres and artists. When we look at the genres of music they say they like a lot, their taste is eclectic. Though rock and pop come out on top with 46% and 45% saying they like them respectively, 35% say they like alternative a lot, 32% say they like hip hop/rap a lot, and 26% say they like indie a lot. Classical, country, R&B, and dance music all received a nearly equal percentage, and 35% marked other, and named everything from trap to oldies. Only 11% tell us they only listen to one genre of category of music. 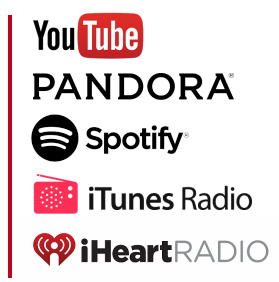 Millennials are at the forefront of the mobile revolution, and it’s that revolution that has fuelled the biggest shift in music consumption: streaming. At this point, streaming is not news, but the industry continues to grow. While album sales continue to drop, music streaming is only growing. But while Millennials and teens are fuelling the growth of existing services that provide them the curated and varied music collections they want, when they want them, the majority are turning to an “old” standby for their music streaming needs: 63% say that they regularly use YouTube to listen to music, compared to 53% who use Pandora, and 41% who use Spotify. Meanwhile, iTunes Radio comes in fourth place, but at 21%, and iHeartRadio is regularly used by 16%.