We asked 1000 young consumers 13-32-years-old to tell us who their favorite music artist is right now. Here’s what we found out…

In our last monthly survey of consumers 13-32-years-old, we explored their musical tastes and behaviors, including a look at who their favorite music artist is right now.  This is a qualitative look at the question, which was left open-ended. We’ve culled through those responses to glean insight on the artists that are appealing to this generation, and some of the major differences between teens and older Millennials’ tastes.

First, let’s take a moment to talk about the obvious: music is a huge part of young consumers’ lives. According to our most recent survey, 76% say they listen to music multiple times a day, and 80% say music is an important part of their lives. It isn’t just a part of their habits, they are passionate about it: 70% agree with the statement “I couldn’t get through a week without music.”

Now that we’ve established that, let’s take a look at their responses when we asked teens and older Millennials “Who is your favorite musical artist, group, or band?”

A look at all of their answers reveals that many declare they don’t have a favorite, or that they can’t choose. This isn’t because they don’t care, it speaks more to the fact that this generation is interested in so many music genres and artists. In fact, 79% agree with the statement “My music taste doesn’t fall into one specific genre or category.” Males and females answered equally for not having a favorite artist or voicing that it was too hard to choose. These answers were also seen evenly distributed across ages 13-32. One 21-year-old male told us, “Quite honestly? I have too many [favorite artists] to choose from,” while a 32-year-old female explained, “I don’t have a favorite…it depends on my mood.”

If we take out those “can’t choose” and “don’t have one” responses and cull it down to the top 25 artists mentioned, a clear winner emerges:

Yes, Ms. Swift rises to the top. Her passionate fan base is a likely reason for her high ranking, and we should note that the majority of those who named Taylor as their favorite artist were female. As we’ve mentioned before, whether or not you like her earworm hits, brands could learn a few marketing lessons from Taylor Swift. But we won’t ignore the runners-up: The Beatles came in second place on this overall top 25 list, which shows that Millennials and teens were properly influenced by Boomers’ music tastes. (Also, they’re The Beatles.)

Of course, musical tastes differ by age groups. In fact, according to a study by Spotify and Echo Nest data, taste in music is solidified around 33-years-old, after which it becomes more rare to seek out new music. The study illustrates that listeners’ interest in new music continues until around 25, then slows to “maturity” in the mid-30s. So we separated out consumers 13-17-years-old and those 18-32-years-old to find any differences. Here are the teen’s top picks: 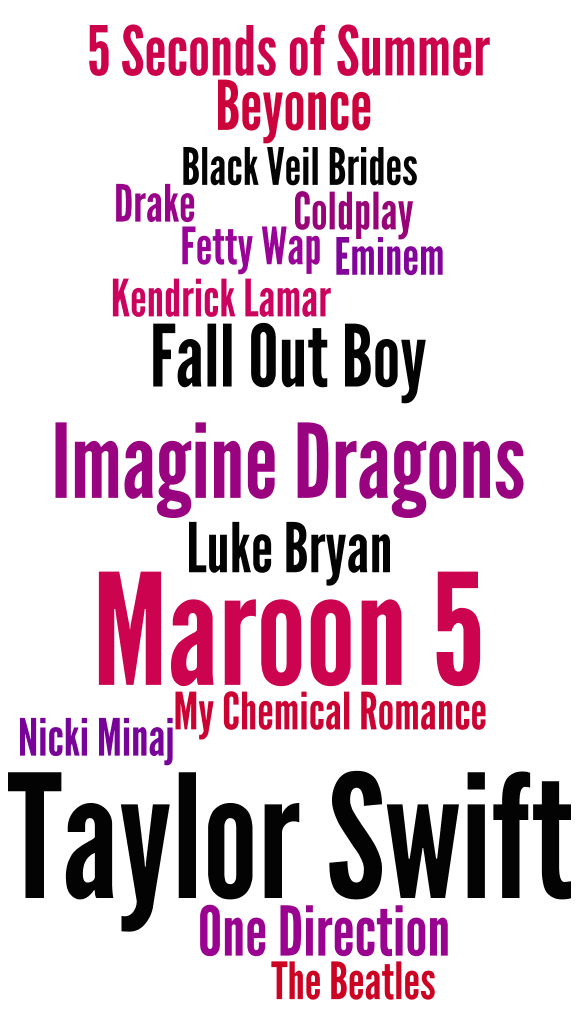 Taylor Swift, Maroon 5, and Imagine Dragons ranked as the top three favorite artists for 13-17-year-olds, who were also more likely than their older counterparts to name modern-day boy bands like One Direction and 5 Seconds of Summer. Differences in music artist taste become more clear when we look at the top picks for 18-32-year-olds: 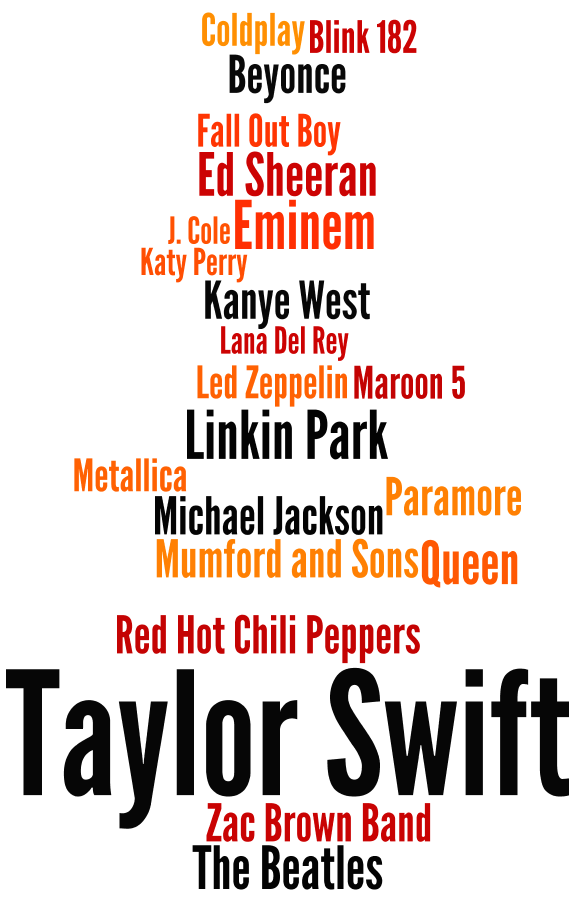 Though Swift comes out on top with these young consumers as well, 18-32-year-olds were more varied in their favorite artist mentions, with less clear front-runners. But not too surprisingly, older Millennials were more likely than teens to mention long-established bands like The Beatles, Red Hot Chili Peppers, and Queen. Outside of Swift, the only artists to make both age group lists were Beyoncé, Fall Out Boy, Eminem, and, of course, The Beatles.

See, older generations do have something in common with these younger listeners!

North America
3 Workplace Trends Gen Z Is Already Fueling
Gen Z is already making their mark on the workplace with these 3 trends… TL;...
Western Europe
4 Brands Tapping TikTok to Reach Young Europeans
Having a TikTok marketing strategy is a must for brands trying to reach young Europ...
North America
We Need An American Girl Doll Who Is on The Viral List
TL;DR Instagram and TikTok are coming up with some wild American Girl doll...