Five Things You Don’t Know About Millennials and Teens

Every month, we survey 1000 13-32-year-olds to learn about young consumers’ attitudes and behaviors, and today we’re using recent data to highlight five things that you probably don’t know about Millennials and teens, from their mobile behavior to their spending habits. Not everything you’ve read about them is true… 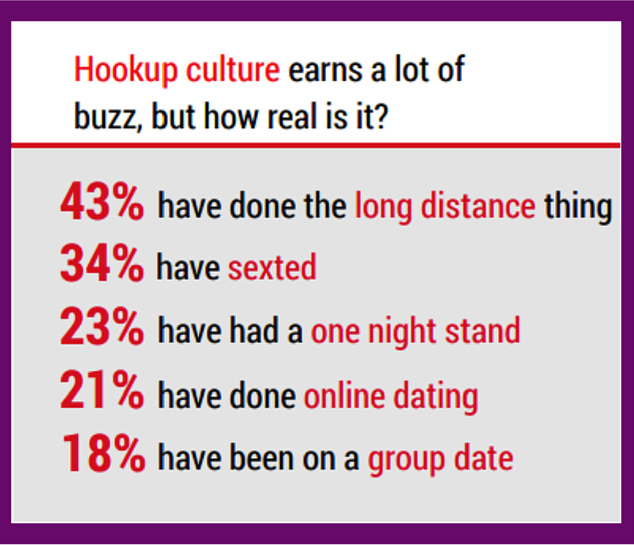 1. THEY’RE MORE TRADITIONAL THAN YOU THINK.

Hookup culture and all those “newfangled” dating apps get a lot of attention, but in reality Millennials and teens are more traditional than you might think. 50% of 13-32-year-olds have been on a formal date, 25% are in a committed relationship, and 17% are married. The majority of those in a relationship met their significant other in an old-fashioned way: 32% met at school, 22% through mutual friends/family, 9% met at work. But how real is that infamous hookup culture? Only 23% of those over 18-years-old have had a one night stand. And while it’s true that sexting is a thing—34% have sexted, and 15% have “naughty Snapchatted”—the majority want stability in their romance, with 75% saying they want to be in a long-term committed relationship. 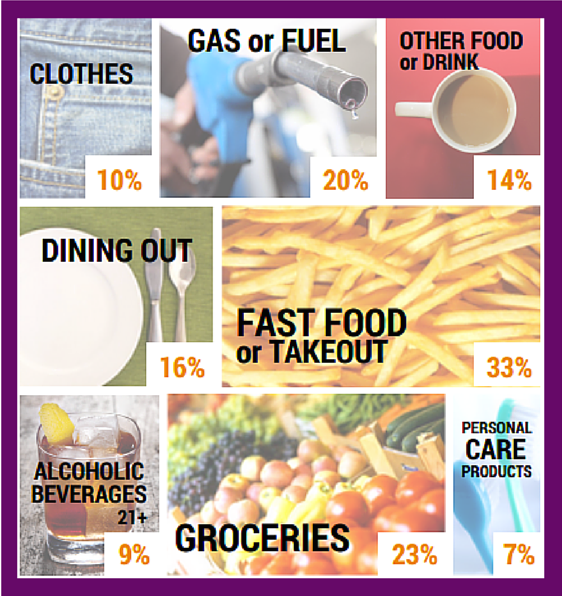 2. THEY ARE EATING FAST FOOD.

Millennials have been accused of “killing” many a fast food brand, with 2014 filled with reports of their dining preferences dictating the future of fast food. It is true that young consumers have slowed their restaurant visits, and fast food restaurants have seen a 5% decrease in traffic amongst low income Millennials and a 16% decline from higher-income Millennials over the last seven years. Many chains are realizing that the generation is more interested in brands that invest in ingredients than those that spend on marketing. But the reality is that they ARE still spending on fast-food. According to Ypulse’s most recent spending tracker, on an average day, 33% of 13-32-year-olds spend money on fast food/take out, 23% spend on groceries, and 16% spend on dining out. Their definition of fast food might be in flux, but if brands can give them the products they want, they will spend. 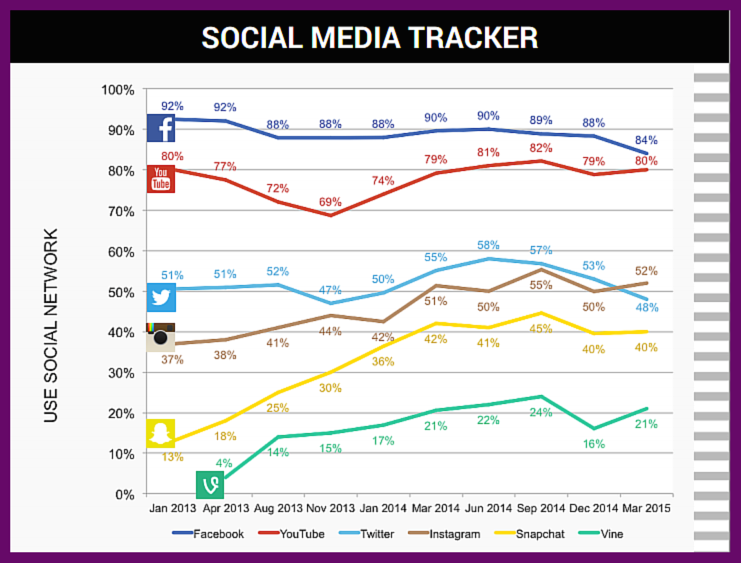 That’s right, in Ypulse’s most recent social media tracker, Instagram overtook Twitter, with 52% of 13-32-year-olds saying they use the image-sharing network, compared to 48% who say they use Twitter. When we ask which social networks they actively post content or comment on a daily basis, 33% said Instagram while only 22% said Twitter. This daily use only intensified for teens: 39% of 13-17-year-olds are Instagramming daily, versus 21% who are tweeting. It’s a trend we’ve been watching, and calling out, for some time. Image-based platforms have seen a rapid rise in popularity thanks in part to Millennials’ visual communication tendencies, and marketers will continue to shift their strategies to visual platforms to reach young consumers. 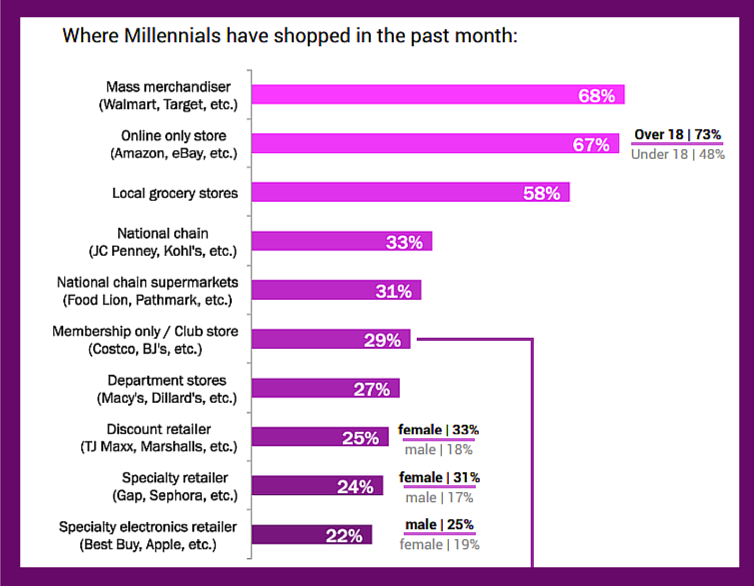 4. THEIR ONLINE SHOPPING IS RIVALING THEIR IRL SHOPPING.

It’s no secret that young consumers are more open than previous generations to online and mobile shopping, but now their digital spending is rivaling their IRL shopping time. Our March survey revealed that while mass merchandisers top the ranking of the places Millennials and teens have shopped in the last month, online-only stores are a very, very close second with 67% of 13-32-year-olds saying they had shopped online in the last 30 days. Those over 18-years-old were even more likely to have shopped online, with 73% reporting they had made a purchase from an online-only store, compared to 48% of 13-17-year-olds. Local grocery stores came in third on the list, and 33% said they had shopped at national chain stores like JC Penney and Kohl’s. 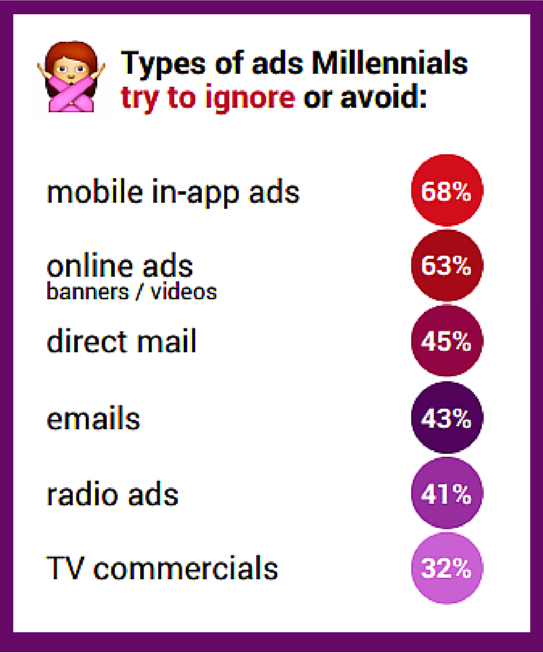 Yes, young consumers are hooked to their mobile devices, and brands need to reach them there. But when we ask young consumers which type of advertising they usually ignore or avoid, 63% say online ads, like banner and video ads, and 68% say mobile in-app ads. In other words, digital marketing—you’re doing it wrong. It’s not enough to be where they are, you have to be where they are, and match your message to their behavior. As more brands and platforms clue in to that fact, we’re seeing an evolution of digital marketing and pre-rolls, banner ads, and more are progressing to appeal to young consumers’ mindsets. Meanwhile, while we know for a fact that they are fast-forwarding through commercials whenever they can, only 32% say they try to ignore or avoid TV ads.