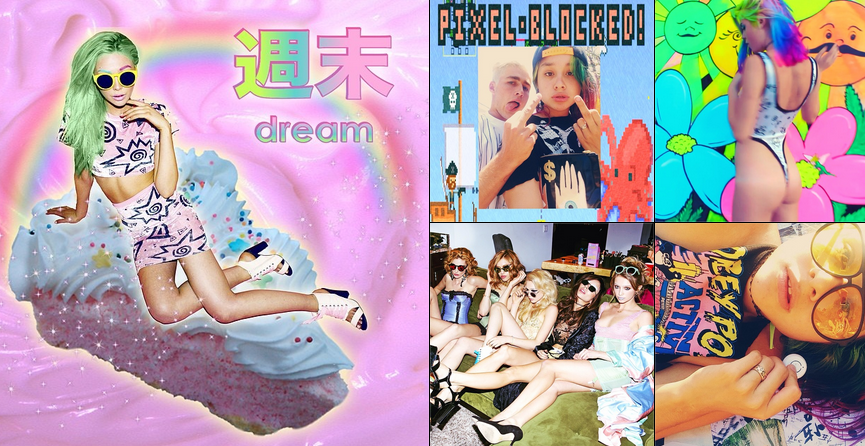 While Instagram has come under fire for constraining its users’ freedom of late, as evidenced by the #FreeTheNipple campaign against nudity censorship, Tumblr remains a visual platform for the underground, providing uncensored freedom of expression for musicians, artists, and everyday teens alike. Tumblr may have given birth to the GIF and is a place where fandoms thrive, since each user’s microblog begins as a barebones digital space to customize and project what they find visually stimulating. The share-heavy behavior of the social network has given a larger window into certain trends, including the indefinable yet instantly recognizable style in fashion and music that we’re calling The Tumblr Effect. The best definition: the combination of ‘90s silhouettes and vintage World Wide Web references, ‘70s bohemia and free spiritedness, Tokyo street style, emoji graphics, rainbow colors, and a glittery, sexual touch. Unlike the niche 2011 to 2012 trend of Seapunk—an online subculture of ocean-inspired, acid-trippy, dream-like digital sequences which was considered by some a flash in the pan—The Tumblr Effect has been proliferating across the web, and especially seeping into new media.

The juxtaposition of graphic and psychedelic aesthetics is messier, feels edgier, and is less predictable than the clean, modern design that has recently taken over app interfaces, websites, and minimalist fashion. The need for this loud and somewhat frantic expression may be a movement in opposition to the always-pretty, always-perfect, stylized blogger images that have become so popular on so many networks. Bloggers have become micro-celebrities in their own right with hoards of followers, but even mainstream artist Katy Perry says she is tired of “biased, boring, bougie bloggers” who seem to follow a formula for success on visual networks. To combat the look of contrived and over-edited images, some Millennials are experimenting with mixed media, graphic collages, and wilder more untamed styles using elements of The Tumblr Effect.

For a clear example, look no further than the GIF-laden video for rapper M.I.A.’s latest single “DoubleBubbleTrouble” representing the evolution of the music video. Combining what looks like user-submitted internet clips, colorful clothing, trippy graphics, and screen-within-a-screen displays, this video nods directly to the social network’s most popular feeds. Up-and-coming club music duo ASTR recently released a sneak peek of the video for their newest single “Blue Hawaii” on Instagram that will mark the first visual representation from their new EP. GIFs on the wall, flashing rainbow backgrounds, ‘90s fashion accessories, hell, even a unicorn, all appear in this 15-second clip, embracing Tumblr graphic elements in full force while keeping viewers guessing as to what might pop up next. The site #cachemonet, discovered this past winter and linked frequently on Reddit since, also plays with the unexpected in GIF visuals, defining itself as a marriage between curation and code with custom and set .gifs from Tumblr constantly rotating to create new combinations. The aesthetic of The Tumblr Effect feeds off of the early web visuals that Millennials grew up with and combines them with new media for a chaotic, sometimes ugly contrast that is excitedly unpredictable. 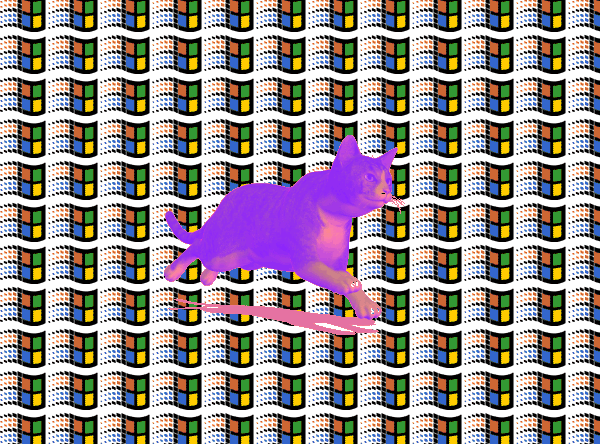 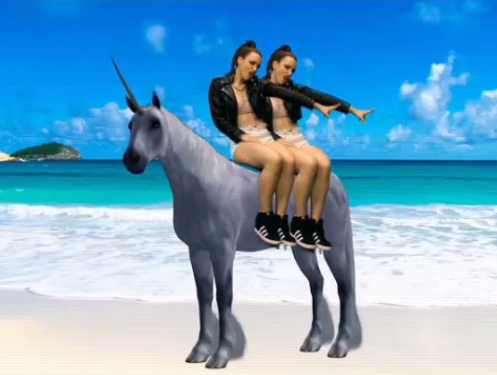 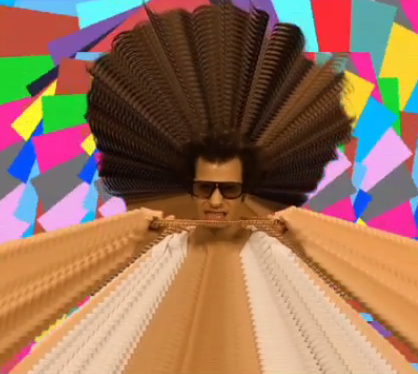 As this internet aesthetic seeps into music visuals, we also see it growing on social networks like Instagram, used in rebellious raver culture and experimental fashion. Certain trend leaders on Instagram from Tokyo to Australia to LA have taken The Tumblr Effect and run with it, creating unique fashion lines and coining a certain style of collage photography. Alida Buffalo (@kitalida, 6,782 followers) is an Australian vintage clothing retailer curated and shot by freelance stylist Kit Scholley who calls the brand a love affair between the ‘70s and ‘90s. Often featured in the line are Mimi Elashiry (@mimielashiry, 239,754 followers) and Teresa Oman (@diddysback, 22,140 followers) who was fittingly one of the Most Reblogged Models on Tumblr last year. Another Australian designer and retailer is Poppy Lissiman (@poppylissiman, 14,863 followers) whose colorful and dreamy collages are paired with eye-popping accessories that often play with cartoons and emojis. See also: Mamadoux (@_mamadoux_, 29,205 followers), a line of one-of-a-kind pieces designed and handmade in LA by young fashion designer Elliott Beach, with self-proclaimed raver kid Palma Wright (@hateboy2, 24,403) as President and photographer. These Millennial fueled fashion labels and accompanying Instagram feeds take fashion on a Tumblr bender, creating pieces with bold, cartoon-like prints and skin-baring cuts, and topping looks off with rainbow colored hair and graphic dreamscape backgrounds. The somewhat more mainstream success of this fashion sense has been proved by internet-beloved designer Jeremy Scott, whose wildly patterned designs are popular among the elite of celebrities like Lady Gaga, Rihanna, Rita Ora, and so on. His current homepage features a page full of moving model GIFs, drawing the eye to unexpected movement on an otherwise static display. 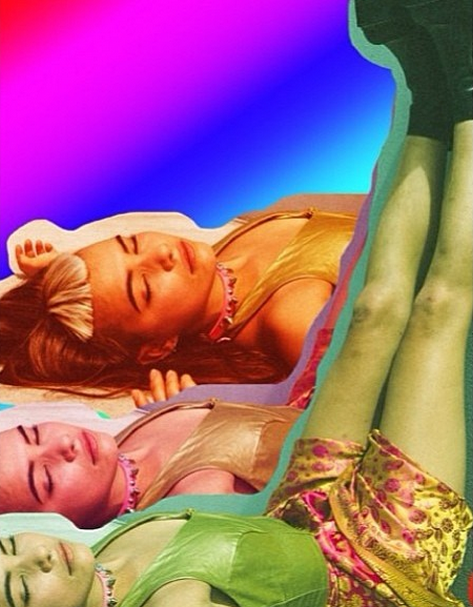 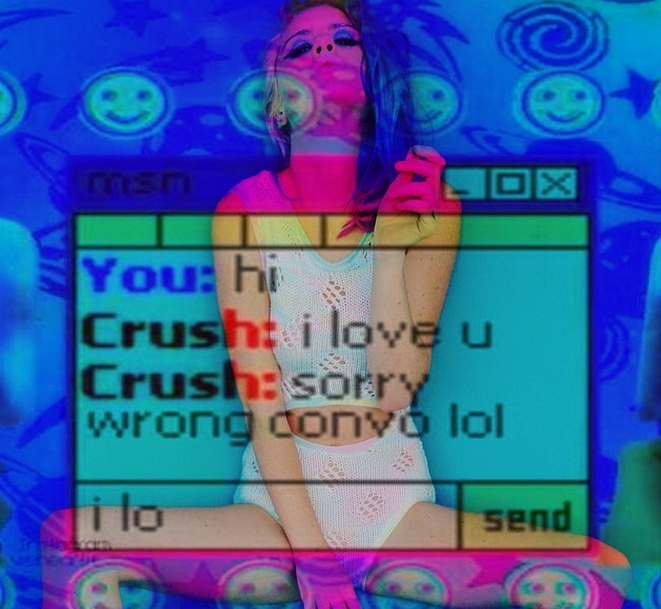 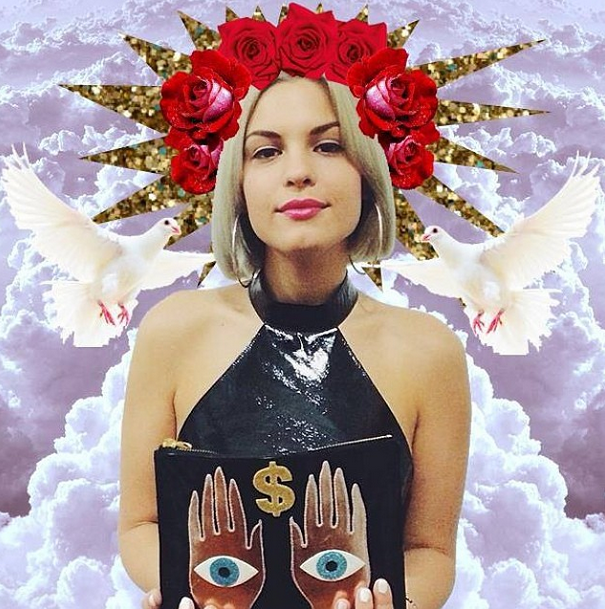 The Tumblr Effect draws inspiration from decades past and fashion trends happening around the globe, and since it has come to a head online, Millennials are able to replicate it using the language of the internet. No mixed media collage or personalized GIF clip will ever be quite the same, and the trend’s unpredictable nature is what has propelled creative members of this generation to continue to re-generate Tumblr-inspired visuals and experiment with Tumblr’s unique aesthetic outside of the network.