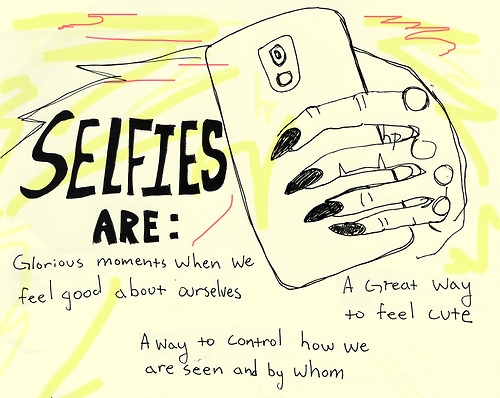 Millennials have been combating many of the stereotypes about them, but thanks in part to their love of selfies, they seem to be fueling the belief that they are more narcissistic than any generation that came before. However, selfies might not be as narcissistic as they first seem. An onlooker scrolling through various social media profiles is bound to find many a duck face, mirror body shot, and flawless (albeit filtered) portrait staring back at them, but the selfie trend is more than just a stage for face time. New projects and campaigns are showing the other side of the selfie, and how it can be a tool of empowerment for some.

This generation is using selfies as a way to document their everyday lives, as those throughout history have done before with self-portraiture, but is also using them to convey emotion and personalize their experiences. Dove decided to look underneath the surface of selfies to uncover what it means to take an “honest selfie” in their latest campaign. Their documentary short Selfie challenged young girls and their mothers to snap honest self-portraits of themselves: “No duckface. No lighting tricks. Just one person, as they are, in front of the camera.” Taking these shots put the power of perception in their hands, letting them re-define what they consider beautiful about themselves for a newfound sense of self-confidence. Insecurities turned into unique traits, which became the new markers of beauty.

The campaign begged the question: can a selfie be empowering? 82% of women believe that social media influences how we define modern beauty. The amount of friends and “likes” on social media, and in real life, inescapably impacts self-esteem for teens today, and selfies have become a way to portray emotion and point of view with a simple image. Judgment abounds for the motives behind selfies, even spelled out in the Oxford English Dictionary that quotes: “occasional selfies are acceptable, but posting a new picture of yourself everyday isn’t necessary.” We see a constant push and pull from Millennials on social media between seeking validation for what is posted, in other words fishing for compliments, and sharing what it is they see and think. Though some portray a vain, constant need for approval from their selfie posts, other Millennials are voicing their opinions in support of the act and its ability to capture and display a person’s sense of beauty and confidence, or “selfie-steem.” Coming from a generation that exposes itself to the masses on YouTube, Vine, Instagram, Facebook, Pinterest, and so on, seeking out attention with photographs could be considered more an activity of creativity and pride than self-obsession. As Rachel Simmons wrote in her Slate piece “Selfies are Good for Girls”:

The selfie is a tiny pulse of girl pride—a shout-out to the self… If you write off the endless stream of posts as image-conscious narcissism, you’ll miss the chance to watch girls practice promoting themselves—a skill that boys are otherwise given more permission to develop, and which serves them later on when they negotiate for raises and promotions.

Many social networks, especially the private communities popping up that are gaining significant youth followings, cultivate positive comments among Millennials for peer-created content. Even YouTube has undergone a massive overhaul for its comment section that pushes encouraging and helpful musings to the top. Yet the evil brought out by anonymity online that puts bullying and shaming in the headlines is still prevalent, and especially targeted at what selfie culture is hyped to represent. Lindsay Bottos, a 21-year-old art student, found that whenever she posted a selfie on the network she received a deluge of nasty comments, often from her female peers. Her Tumblr project “Anonymous” puts those hurtful comments over top of her selfies to display the warped and hypercritical opinions that many young women on the internet are subject to daily. But despite having enough criticism sent her way to fuel an ongoing art project, Bottos continues posting selfies. To her, and to many others, they declare “hey I look awesome today and I want to share that with everyone.” Her project initially gained over 85,000 notes and 20,000 new followers on Tumblr, bringing light to the topic of selfie shaming and encouraging her to continue to showcase her confidence, selfies included. 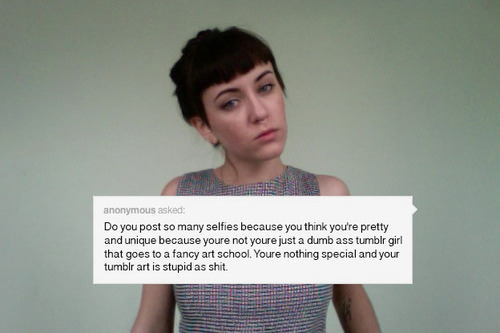 The “Anonymous” project took selfies to the next level, and the first meme of the New Year took them a step further with the #SelfieOlympics. This Twitter trend challenged Millennials to take the craziest bathroom selfies, like piling as many different and unexpected items inside (think copious plants to depict a rainforest or eating spaghetti from the sink) or snapping themselves in a physical challenge like climbing up a door. Like many social media trends, the Selfie Olympics let Millennials become an active part of the cultural conversation surrounding selfies, testing what exactly they represent and turning them into something of pure entertainment. While humor and physicality were the most popular route, some took it as an opportunity to show their inner strength, like one young girl who posed in a hospital gown with her health monitors, and another who flashed the middle finger, head shaved and smiling. These young women received outpours of praise from peers, influencing others to follow suit and giving them the confidence to expose themselves in an honest way.

Integrated into brand campaigns and viral movements, selfies have shown their staying power as a verified part of Millennials’ lives and modern culture at large. Members of this generation are still figuring out who they really are, and being comfortable enough with who they see on the screen to share a selfie is a step in a positive direction.