How the Golden Globes are Making Millennials Tune In

After a long award show ratings slump, the Golden Globes are winning Millennial viewers back. Early reports on the viewership this year show that last night’s broadcast hit a ten-year high with adults 18-49, with 20.9 million viewers tuning in and ratings up 8% from 2013. Last year’s show earned a tremendous 17% increase in ratings from the previous year, and a 28% increase in viewers 18-49, so clearly the Golden Globes are doing something right. Every year, Millennials make up more of that treasured 18-49 demo, so figuring out what is drawing them in as an audience isn’t just important for the Globes and other awards shows, but for all major live event television. So what is making Millennials tune in for the Golden Globes more than they have the last ten years? We’re breaking some of the reasons down for you here:

1. Amy and Tina.
There is no doubt about it, having a host, or better yet, two hosts, who resonate with Millennial viewers has been a major factor in bringing the Globes back to life and back to the attention of Millennials. Young viewers know and love Amy Poehler and Tina Fey, and grew up watching them on SNL, 30 Rock, and Parks and Recreation. (As Lena Dunham famously pointed out during last year’s show.) The Oscars saw a similar leap in ratings for adults 18-45 when Seth MacFarlane, creator of Millennial mainstay Family Guy, hosted in 2013. MacFarlane turned in a controversial performance, but was clearly able to get viewers to pay attention. Part of what endears Fey and Poehler to Millennial fans is the fact that they don’t take themselves seriously whatsoever, a characteristic that continues to appeal to a generation who distrusts perfection. But it isn’t just the fact that Poehler and Fey have Millennials in their fanbases that makes them alluring hosts. Millennials are (as it has been said a million times) team players, and having a duo, who are clearly close friends, host together appeals to their own group nature.

2. The stars aren’t segregated.
To Millennials, a star is a star, whether they are on TV or the big screen, and the Golden Globes is the one awards event where they aren’t segregated. Last night included a running gag where Poehler and Fey teased Julia Louis Dreyfus for sitting in the “film section” and then switching to the “TV section” of the awards. But in a few years that bit might not work: the idea that one is better than the other is swiftly dying. Millennials are incredibly accustomed to seeing movie stars take roles on TV, and it is happening more and more frequently. Zooey Deschanel completely shifted her career from film to television with her show New Girl, and she is not even close to the most recent example. As the quality of television continues to rival film, the idea that a star belongs in one camp or the other will only continue to disappear, and events like the Globes will continue to appeal. 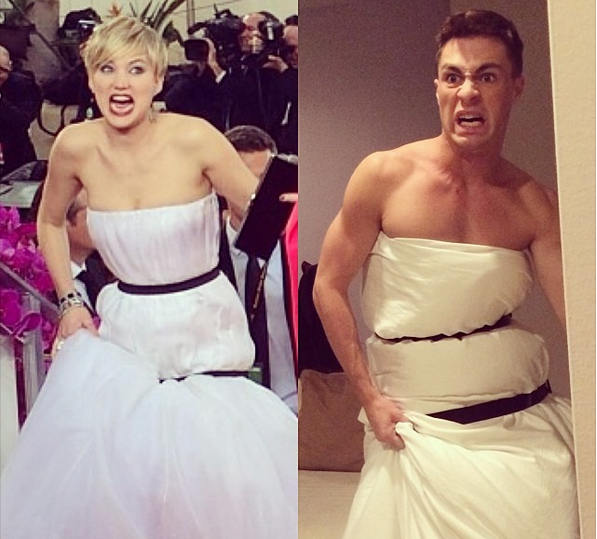 3. Meme-able moments.
Thanks to internet culture and media, in the last few years live events have become opportunities to grab onto meme-able moments and run. Television is hashed and rehashed online, as both comedic and awkward moments take on a life of their own as GIFs, freeze frames, and participatory pop culture take-downs. Google “Golden Globes 2014 GIFs” and even Business Insider has created a GIF gallery of the big moments from last night’s show. At least three memes were born from the 2014 Globes. E! News unwittingly produced the E! Fun Facts meme, when they posted a “fun fact” about Michael J. Fox being diagnosed with Parkinson’s disease. Parodying off of the moment, viewers made their own versions with “fun” (a.k.a. depressing) facts superimposed on the E! red carpet coverage. Jennifer Lawrence inspired a new meme herself, as Twitter users both famous and average began parodying her dress by wrapping themselves in sheets and black ribbon. Events like the Globes have stopped being entertaining for just what is put on screen, and a major part of the appeal of viewing for Millennials is participating in the cultural conversation that is flourishing online.