Overcoming Gender-Based Toy Marketing One Advertisement At A Time 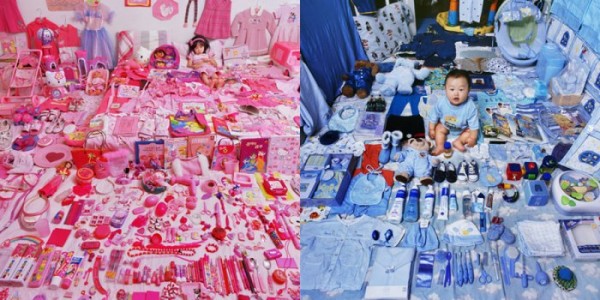 Many kids grow up thinking that pink is for girls and blue is for boys, as the picture below shows. Dolls, princesses, and beauty related toys are typically marketed to girls, whereas building sets, cars, and action figures are mostly advertised to boys. However, such stereotypical marketing can have negative effects, providing children with narrow views of what it means to be a girl or a boy. Brands and marketers have received much criticism in the past few years for perpetuating these traditional constructions of gender, however, others are slowly seeking to change this problem. One of our Youth Advisory Board members, Julia Tanenbaum, weighs in on this subject, highlighting areas of frustration and where progress is being made.

Overcoming Gender-Based Toy Marketing One Advertisement At A Time

Despite conventional wisdom that today’s children can pursue whatever career or lifestyle they please without their gender impairing their ability to succeed, the toys we raise them with send a completely different message. This year has given us toys like Campaign for a Commercial Free Childhood “award” nominated LEGO Friends Butterfly Beauty Shop, which shows girls that they can only learn engineering principles when their materials are pink beauty supplies and they can “get primped and pretty” instead of, say, building. Although LEGO has received much attention for its offensive gender marketing, children are constantly bombarded with toys espousing equally damaging messages. Bratz dolls and Barbies teach girls to focus on their appearance and aspire to be stick thin, while Nerf guns and military themed toys inspire boys to be violent and active, with little scope for nurturing or creativity. These toys and their limiting messages are bad enough in themselves, but they are just part of the problem.

When I walked down the toy aisles at Target looking for a gift for my cousin last week, I felt as if I had been transported to the 1950s; girls’ toys geared toward domestic activities like vacuuming, caring for children, and beauty, and boys’ toys that encouraged children to become little soldiers were separated not just by theme and packaging, but by neat little rows. Apparently boys and girls are so different and their gender roles so defined that their interests can’t even exist in the same space. It’s no wonder that four-year-old Riley Madia was so frustrated by gender segregation in toy marketing.

These issues are never more prominent than during the holidays. As parents look to find fun gifts for their children, they are confronted with toy catalogues, commercials, and other forms of marketing that promote narrow definitions of what it means to be a girl or a boy. Girls’ products are clearly identified through their coloring; pink has become the ubiquitous symbol of modern girlhood, and children can easily tell which toys are meant for them, and which toys are not. Furthermore, the self-fulfilling marketing becomes more and more convincing as children who beg for toys and the parents who buy them can clearly see children of certain genders playing with certain toys. Girls in Christmas toy catalogues play with easy-bake ovens and vacuums, because cooking and cleaning are shown as essential skills for their future careers as housewives, and boys play with chemistry sets and tools, which teach them skills ranging from spacial relations to scientific inquiry. These gender/toy dichotomies exist even for babies. Toys aimed at infants from brands like Fisher Price and Melissa and Doug have gender specified versions; many of them encourage girls to play with makeup, and boys to play with tools.

There are serious ramifications to this marketing. It enforces harmful gender norms and suggests that there is only one way to be a girl — pretty, princess-y, and addicted to shopping. Authors like Peggy Orenstein and Lyn Mikel Brown have suggested that this quickly leads to sexualized tween girls, and supports harmful attitudes about body image and appearance later in life.

However, businesses like Pigtail Pals and websites like A Mighty Girl have dedicated themselves to empowering girls and combating the sexist attitudes embodied in children’s products and marketing, and represent feasible alternatives to typical gendered toys for parents, and even feminist family members like me, who are looking for gifts. My friends and I would all prefer to give cousins toys that encourage learning and creativity, rather than vanity and an obsession with shopping. I think this reflects a generational change, and hopefully will impact how toys are marketed in the future. Although Target, Toys R Us, and other retailers are full of pretty princess toys, A Mighty Girl and other websites have plenty of great suggestions. After all, toys should be made for children, not for just boys or girls.

Furthermore, there is a growing movement attempting to change the way toys are marketed. A recent success story has been how Swedish toy company Top Toy has gone beyond a gender-neutral advertising campaign with their 2012 toy catalogue. Unlike traditional catalogues, this one depicts girls with Nerf guns and boys playing with dolls. Better yet, it includes many images of boys and girls playing together with toys that are usually assigned to one gender, like a toy castle complete with dragon figurines, or even a kitchen. I found this especially gratifying to see, because I remember loving “boys’ toys,” like action figures of knights and dragons, as well as my fairy wings. And last year in England, British toy store Hamley’s discontinued its practice of grouping “girl” toys on pink floors and “boy” playthings on blue floors, because of the campaign started by blogger Laura Nelson. Harrods’ even introduced a gender neutural toy department earlier this year.

Clearly, the toy companies and retailers have begun to respond. According to Time magazine, “Anne Marie Kehoe, the vice president of toys for Walmart U.S., explained that by the end of this year, construction toys for girls will represent nearly 20% of the construction toy category.” Obviously, there is still a long way to go, and the problem isn’t just the marketing. However, by taking steps like changing the way catalogues or toy stores are designed, companies can encourage children to step out of the pink and blue boxes, and help our society be one step closer to letting our children truly be who they want to be.

Julia Tanenbaum is a senior at Claremont High School in California. She has been on YAB for three years, and is excited to be back. Like most teenagers, she spends a lot of time on schoolwork, but she also enjoys playing video games, particuarly Japanese role playing games, volunteering, and watching Doctor Who and anime. She spends a considerable amount of time online, and loves internet culture, whether it’s Tumblr, music discussion forums, or Memebase. She also loves reading, especially Manga, other comics, and any kind of science fiction.