Fake meat’s takeover could be speeding up.

Fake meat’s takeover could be speeding up. Thanks to hygiene and health concerns, meat processing plant closures, and meat rationing in supermarkets, the fake meat trend could go mainstream even faster than previously predicted. Pre-pandemic, young consumers were already fueling the fake meat industry—now sales are rapidly climbing. In the first quarter of 2020, Beyond Meat’s sales increased to $97 million, up from $40 million in 2019, and Impossible Foods has reported new highs as well. They won’t “overtake real meat sales anytime soon,” but the pandemic might have made their rise all the more inevitable. (Mashable) 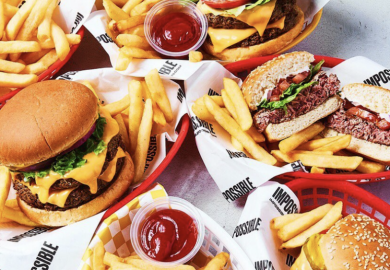