#CoreCore is The Deepest TikTok Trend Yet on The Viral List 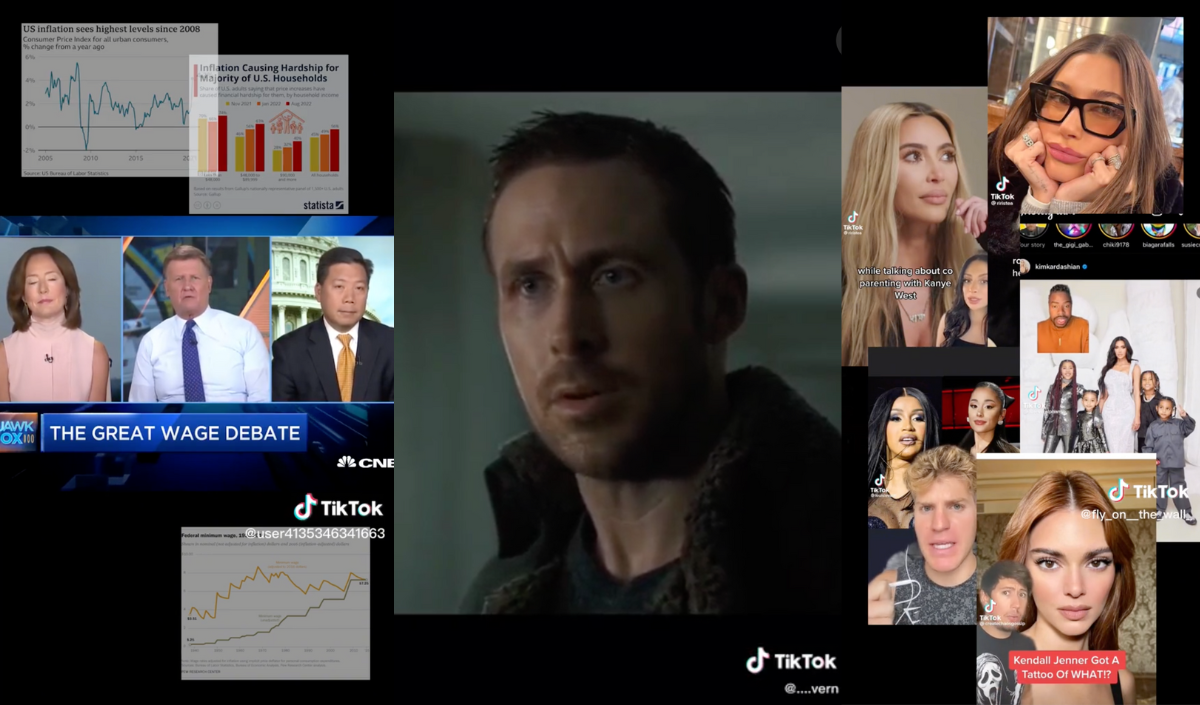 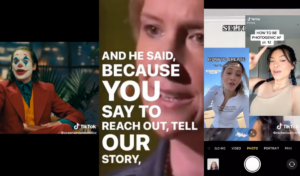 It’s ok if you haven’t heard of #CoreCore, as it’s not even mainstream yet, but it certainly is going viral: the hashtag on TikTok currently has 421M views. We know TikTok is a space where young people leverage legitimate social discourse, and this new trend is an artful way of combining their honed video editing skills with their nuanced thoughts about different social topics. The typical format for the trend is to combine clips from movies, interviews, and in an extremely meta move even other TikToks, with emotional audios, all left up to the interpretation of the viewers—which of course is being discussed in the thousands of comments.

The videos are also being called #NicheTok as they aim to access a specific emotion through the combination of clips and sounds, all purposefully chosen for the creator’s connection between them. Some viral examples include a creator’s impressive “first nichetok post” which poignantly compiles clips from movies all evoking a similar feeling of loneliness, othering, and frustration. Another nearly three-minute video interspliced with clips from a TedTalk captioned “What does love mean to you?” with 1.1M likes captures the images of vulnerability and its intersection with sexism. The intricacy of these posts proves how short form video has become a second language for young creators—and a sophisticated one at that.

While #Core has been used in the last few years to describe hyper-specific aesthetics, usually for fashion subcultures, it also now functions as a general description of collective visuals with a central meaning. As we saw with the virality of #Barbiecore, cores can signal cultural moments of meaning for these young gens. Now, #CoreCore represents a meta-understanding of the focus on aesthetics on their favorite social platforms for everything of meaning to them—including the development of the internet, concerns about their society, and hard-to-explain-in-words emotions. If you really think about it, this is Gen Z’s modern art! 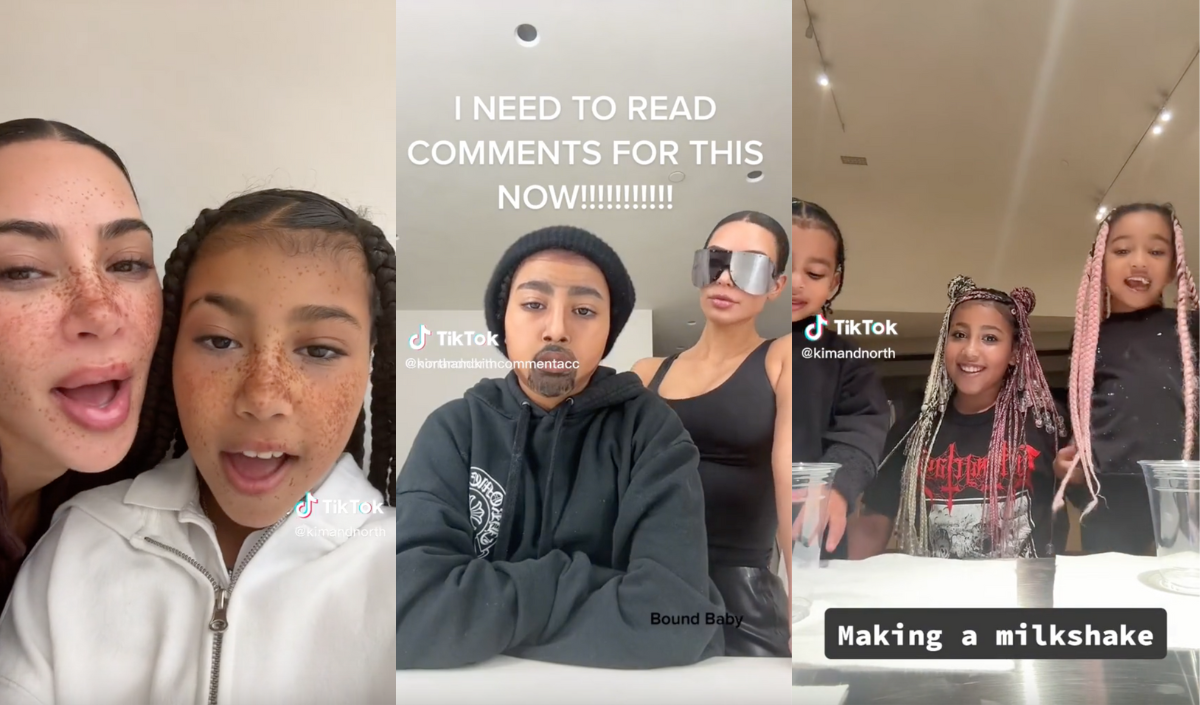 Although the comments are turned off on North’s uploaded videos, TikTok is still making them go viral. The internet simply can’t get enough of Kim Kardashian’s sassy eldest daughter and her fun (yet sometimes very strange) TikTok content under her shared account @kimandnorth. Older Gen Z and Millennials who grew up watching the Kardashians miss that old chaotic feel from their show’s first season—and North is giving that. Whether it’s dressing up in emo clothes and lip-syncing to popular audios or making milkshakes (and messes) with her siblings, North is bringing an authentic feel to the Kardashian family that Gen Z loves watching.

Sometimes her videos are so hilarious or shocking that viewers are uploading their own videos, reacting and commenting in visual form to an audience the algorithm knows has also viewed North’s videos. For example, many of her videos feature costume makeup with fake blood and gore, prompting TikTok to even put a warning label on them. This is a jarring contrast to her family’s famous use of plastic surgery and cosmetic lines. Plus, North often uses iconic audio clips from the Keeping Up with the Kardashian’s TV show to make fun of her mom and aunts. To these users, watching one of the richest kids in the world act like a normal kid and “ruin” her famous mom’s picture-perfect social media presence is actually quite refreshing. After all, YPulse’s Celebrities and Influencers report data shows that Gen Z agrees online celebs are the most relatable. 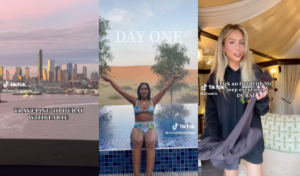 Tarte is taking Gen Z and Millennials’ hottest global influencers on a bougie trip to Dubai—and it’s not necessarily going over well. In celebration of the brand’s new Maracuja Juicy Foundation, Tarte flew out TikTok’s current favorites including TikTok “it girl” Alix Earle, makeup queen Meredith Duxbury, and the always captivating Monet McMichael (along with their plus ones) to journey through sand dunes, relax in extravagant villas, dress up for makeup-themed dinners, and of course take professional photos for their feeds. Fans of the influencers are eating up the content and are loving that their favorite online celebs are able to collab on TikTok videos together.

However, the lavish trip has sparked quite the controversy. Tarte flew out influencers from eight different countries on Emirates business class and they are staying at the Ritz Carlton Rad Al Khaimah, Al Hamra Beach in private luxury villas. And as the influencers each post their Dubai “get ready with me” and “help me pick out my outfit” videos, some TikTokers are sharing their opinions on the “exorbitant amount of money [being spent] amid a pending recession.”

One user, @homewithmel says, “If they had a good strategic planner, they would know that their target audience, Gen Z, cares way more about [supporting] causes compared to virtually attending a vacation that they can’t really afford right now.” Which is true, YPulse’s The Cause Conundrum trend report shows that Gen Z and Millennials want brands to support the causes they care about. The trip has also sparked a conversation over why nearly all of these influencers are verified on TikTok except McMichael, one of the few women of color advertising for the trip. But nonetheless, Tarte is getting the brand exposure they’re looking for: each influencer is featuring Tarte products in their videos (and they’re posting about two to three a day). 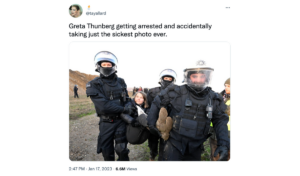 In Western Europe: Greta Thunberg has become a meme (yet again) after being arrested in Germany

Gen Z activism icon Greta Thunberg made front pages this week for a video of her being carried away from a protest by German police. The protest was seeking to stop the abandoned village of Lützerath from being demolished for the expansion of a coal mine. The viral video has gained millions of views, and a few photographers snapped photos of the activist being carried away while she smiles. Of course, the photos have made their rounds on Twitter, and despite their serious origins, her smile led them to becoming the next meme.

Captions range from “me getting carried as a kid after pretending to fall asleep in the car” to Greta Thunberg and Andrew Tate meeting in prison (of course referencing the recent viral interaction where Greta clap backed at the right-wing influencer, which lead to said influencer being arrested in Romania over human trafficking charges.) The photo of Thunberg being carried by police will certainly continue to pop up on the Twitter feeds with more relatable memes, but the viral moment is also a reminder of the importance of activism among young people—especially when it comes to climate change. Young Europeans believe climate change is their generation’s biggest problem, and viral moments like this get the urgency across. 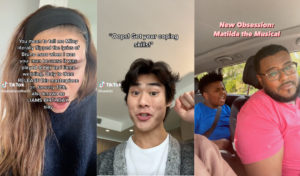 Fashion: This Depop seller went viral on Twitter for making belts and jewelry out of miniature jam jars

Meta: In what they’re saying is LGBTQIA+ support, Meta is set to lift the content ban on bare breasts

TikTok: Oops! got your coping skills—now let’s see what we’ve got

Rude messages from an Etsy return got millions of views, though the video since been deleted

TV (and video games): The Last of Us premiere is HBO’s second biggest ever, following the landmark House of The Dragon release

Wholesome: Delta airlines is flying a boy and his family out to Broadway after a video of him singing showtunes went viral

Travel: COVID restrictions are ramping up for travel from China

A new McDonald’s ad has been labelled genius for having no product placement involved, just raised eyebrows

Beauty: Sephora is opening up its first giant store in the U.K. in March

Shopping: U.K. winners and losers from the Christmas period have been released