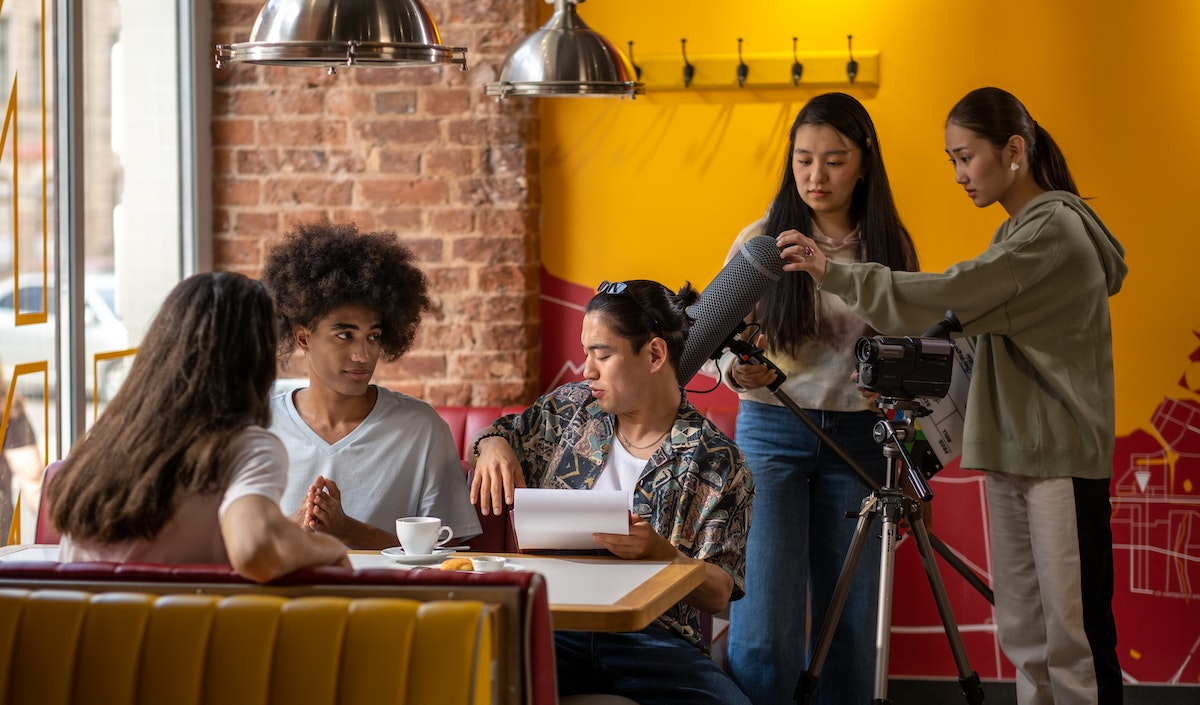 Though strides have been made for representation in entertainment, Gen Z and Millennials say more could be done…

As much as TV studios proudly claim they’ve increased their diversity efforts by percentages in the hundreds, Gen Z and Millennials still say there is work to be done. Even members of Hollywood themselves agree, as evidenced by the recent Golden Globes awards. That event returned after being cancelled last year, in the wake of revelations that the Hollywood Foreign Press Association, as host Jerrod Carmichael put it, “didn’t have a single Black member until George Floyd died.” Carmichael spent the night joking (sometimes not so jokingly) about why he was asked to host, saying “I’m here because I’m Black,” and pointing out the issues with representation in entertainment that persist despite statements of commitment to do better.

Of course, YPulse’s Pop Culture Redefined trend report shows only 26% of Gen Z and Millennials say awards shows are a cultural moment their generations cares about. But we know they certainly pay attention to the entertainment up for awards: YPulse’s TV & Entertainment report data shows 96% of young people watch TV and movies on streaming services, 80% watch shows on cable, and 86% go to see movies in theatres.

Their personal approval of shows and movies can be largely based on whether or not they see accurate representation in them. YPulse data allows us to see how different demographics of Gen Z and Millennials are feeling about representation in entertainment and shows that Gen Z and Millennials of every race and ethnicity feel that the media industry could be doing more when it comes to diversity and inclusion: 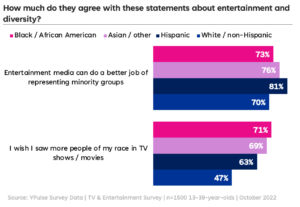 Representation in entertainment is not meeting their standards

The majority of young people (73%) agree that “entertainment media can do a better job of representing minority groups. When we break it down into further demographics, Hispanic Gen Z and Millennials are most likely to say so (81%), followed by Asian youth (76%), Black / African American youth (73%), and White / non-Hispanic youth (70%). Overall, BIPOC (Black, Indigenous, People of Color) youth are +7pts more likely to agree with the statement than White / non-Hispanic youth.

Whether characters are of their own race or not, young people see that representation in entertainment is inequal to real life demographics. Netflix (which 64% of young people watch weekly or more often) conducted their own equity study in 2021, to find they were lacking in representation for LatinX characters, as well as LGBTQ+ characters and characters with disabilities. One of their key findings was that it was of equal importance to have representation off-screen, in their writers, producers, and directors, to ensure more diverse ranges of voices are being heard.

However, they’ve still had issues since then: Netflix’s famed Love is Blind has been accused of purposefully cutting out Black women despite showing them in the trailers. And YPulse research shows that 65% of young BIPOC agree “Entertainment media that uses mixed race groups are just doing it for the publicity”—meaning they feel shows and movies are not truly committed to representing their experiences, but just fulfilling a quota.

When it comes to seeing themselves reflected in entertainment, 71% of Black / African-American youth agree with the statement “I wish I saw more people of my race in TV shows / movies,” making them the most likely to say so. Shows like Abbott Elementary have been landmark in making this wish come true, by putting Black and African American representation in front of and behind the camera. The comedy won five awards at the recent Globes, including Best TV Series, Musical Comedy, Best Actress in a Music or Comedy TV Series, and Best Supporting Actor and Actress in a TV Series/Music-Comedy or Drama. Its over 10M viewers and critical acclaim proves to previously (or currently) lacking entertainment institutions that representation is more than a statistic, it’s a meaningful and valuable story to tell.

Asian youth are second most likely to agree at 69%—and the conversations around accurate representation for Asian people in Hollywood was brought to the mainstream recently with the box office sweeping Everything, Everywhere, All at Once. Lead actress Michelle Yeoh went viral for her Golden Globes acceptance speech for Best Actress, in which she told the pre-recorded exit music to “shut up” before continuing her speech on the racism and ageism she witnesses in Hollywood. Asian women were happy to see Yeoh assert her space and time on the stage, and refuse to have her time acknowledging the feat of a movie about “a very ordinary immigrant, aging woman, mother, daughter,” cut short.

While racial representation in entertainment has become a more common conversation, there is another contested side to equality in TV and movies: representation for the LGBTQ+ community. YPulse data shows that 19% of Millennials and 27% of Gen Z identify as LGBTQ+, making them the most diverse generations to date in this way, but they don’t feel seen by entertainment media. Because while there have been more LGBTQ+ characters in entertainment, most youth of this community still agree “Representation of LGBTQ+ people on TV is still too stereotypical.”

Like Hollywood had for decades portrayed characters of all minorities as simple, inaccurate stereotypes, LGBTQ+ youth say this is still the case for characters they are meant to identify with. Non-LGBTQ+ Gen Z and Millennials also largely agree this is the case, but not to the same extent as those who feel the lack firsthand. A study by Nielsen finds that while overall representation of LGBTQ+ people has increased on screen, “White LGBTQ people are most represented on screen, while female LGBTQ people of color and Latinx LGBTQ people are below parity compared to their population estimates.” The lack of diversity within the representation points to a unequal preference to tell the stories of one group of LGBTQ+ people and their stories over others—limiting the real experiences audiences get to see.

LGBTQ+ youth are also significantly more likely to agree that “Media companies keep cancelling shows with representation for marginalized groups” (68%) than non-LGBTQ+ youth are (57%), as several shows with LGBTQ+ lead characters have been cut short despite their popularity. In the last year alone, shows like First Kill, Uncoupled, and Batwoman were cut short, and before that Atypical and I Am Not Okay With This were both ended reportedly for reasons relating to COVID—but their viewers felt otherwise. First Kill represented an especially hard taken hit as the lead character was a Black lesbian, a group who notes marginal underrepresentation in the media, and it’s 48.8M viewing hours in its first week did not point to lower viewership.

Gen Z and Millennials are the most diverse generations to exist, both in terms of race and ethnicity and their sexual identities. And for these generations, representation is about seeing multiple facets of their identities in entertainment and marketing. Though the industry has made strides, clearly these young viewers feel there is far more that can be done.