Is the Sobriety Shift Really Happening In WE? 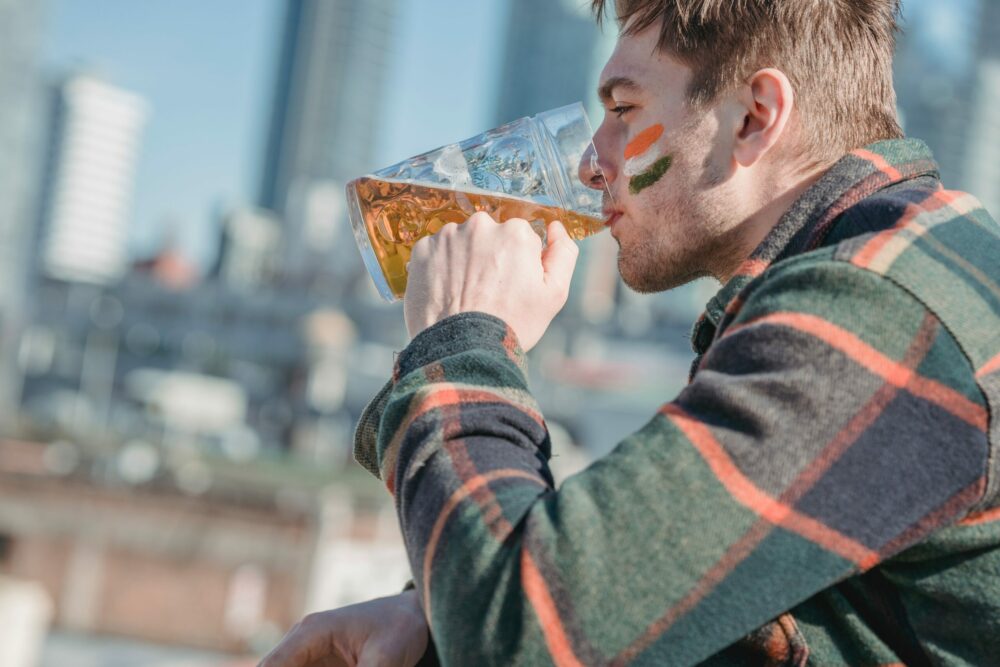 Young Europeans are consuming more alcohol than before, but that doesn’t mean they completely abandoned the sobriety shift…

Alcohol consumption among young consumers went through different phases in recent years: drinking did see a spike at the start of the pandemic as young consumers were looking for ways to cope with the stress generated by all the lockdowns, and stay-at-home orders. But last year, YPulse’s data shows that the Sobriety Shift was back, and stronger than ever among young Europeans—with headlines such as “Gen Z putting the brakes on U.K. drinking culture” or “Gen Z for zero tolerance” exploring the trend. As we enter 2023, it is worth checking if the Sobriety Shift is still trending in Western Europe, and what drinking habits are young consumers in this region displaying. We compared the evolution of daily / weekly consumption of alcohol in the past two years, and found an interesting shift: 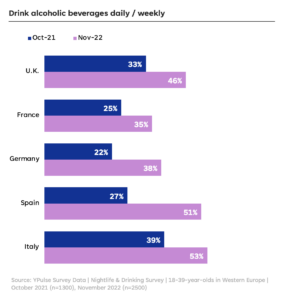 YPulse’s recent Nightlife & Drinking Report reveals that more young Europeans are consuming alcoholic beverages regularly than they did the year prior. Comparing the data year-on-year shows that in 2021, 29% of young Europeans said they were drinking on a daily / weekly basis, and the number rose to 44% a year later. This trend can be observed in the whole region: young consumers have increased their consumption of alcohol in all five countries across Western Europe. Young Spanish consumers have shown the most dramatic increase in alcohol consumption, with a significant year-on-year increase of +24pts.

In our In Between Trend Report, YPulse predicted that young people would move forward with their lives, despite their concerns about COVID-19. Meaning 2022 would see more young consumers go out, and meet with friends, among other things. And this is exactly what young Europeans did: an increasing number made the conscious decision to go out more in the last year.

But that doesn’t mean the Sobriety Shift is over

While it is true that more European Gen Z and Millennials consumed alcohol regularly in 2022 compared to the year before, this might be a structural readjustment to pre-pandemic levels, not a long-term trend away from the Sobriety Shift. Another way to look at young Europeans’ drinking habits is to dig into their participation in Dry January, and data from our upcoming Life Milestones & Future Plans Report reveals the numbers: 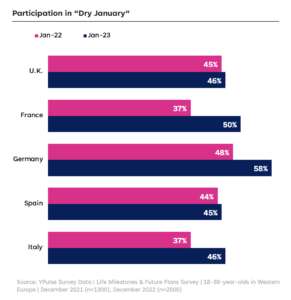 More young Europeans told us they planned to participate in Dry January this year compared to last, and this can be seen in all five Western European countries surveyed—although modest in the U.K. and in Spain. In Germany, almost three in five young consumers above the age of 18 will try not to drink alcohol in January. While it is true that young Europeans are consuming more alcohol than before, these gens are also increasingly curious about implementing times when they don’t drink alcohol. Our data is indicating that it’s balance they’re after, and not a completely sober life, but sober experimentation. Dry January is a traditional opportunity for young consumers to try to be alcohol-free, but the Dry Christmas trend among young British consumers shows that Gen Z and Millennials are open to experimenting with not drinking in various ways. YPulse’s data from Nightlife & Drinking Report shows that 23% of young Europeans who drink alcohol say they designate certain days of the week as no-alcohol days.

What remains true over the years is young Europeans’ disinterest in excessive, risky behavior, and when it comes to alcohol consumption, binge drinking. When asked how much they agree or disagree with the following statement “It’s not cool to drink too much,” 79% of young Europeans above the age of 18 agree with the statement. Europeans Gen Z and Millennials value drinking in moderation as opposed to drinking too much. Low / non-alcoholic beverages are increasingly popular drinks among these gens, and it’s no coincidence that the U.K.’s first permanent alcohol-free off-license opened its doors in London last month.