How Big is Dry January Now That Gen Z is 21? 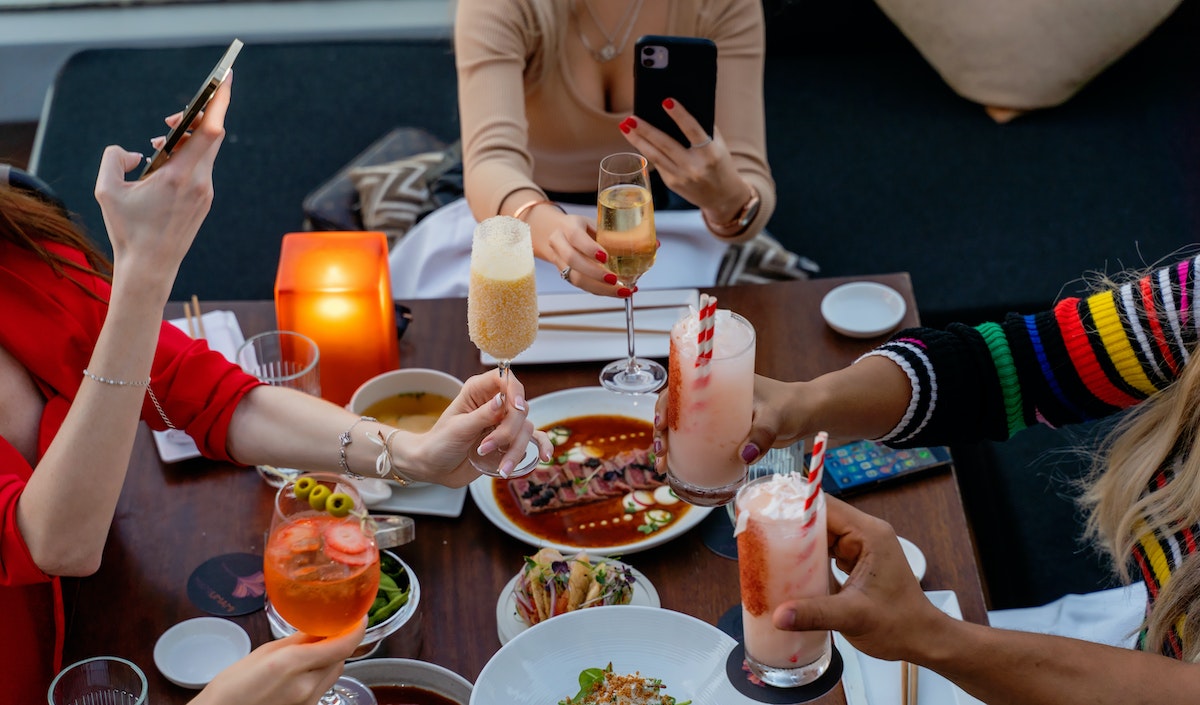 Though plenty of Millennials (and even older Gen Z) likely rang in their new year with the traditional glass of champagne (or five), it might be their last drink for a while. In true challenge-loving style, young people in North America have latched onto “Dry January,” a campaign from the U.K. encouraging people to give up drinking for a whole month. YPulse has said for years now that Millennials, and now the old-enough-to-drink Gen Z, are sober curious generations. And while 2020 temporarily boosted their drinking habits, the returns of normalcy in 2022 re-booted their drive to cut back.

YPulse’s Nightlife & Drinking report shows that 59% of 21-39-year-olds in the U.S. say they drink monthly or more often, with 34% saying they drink weekly. This challenge drives many of them to reflect on their habits for a whole month, ultimately inspiring many to cut back for more of the year to come. Last year, 53% of 21+ young people told YPulse they were planning on participating in Dry January. When we ask 21-39-year-olds if they’re planning on participating in dry January this year, it’s clear that jump in popularity was not a one-off event: the majority are taking on the challenge once more. 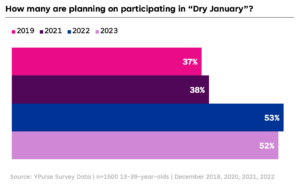 Since we first began asking young people about their Dry Jan plans, the popularity of Dry January has jumped significantly. YPulse data shows a major shift in popularity last year: As 2022 ushered in the return of some normalcy, young people enthusiastically returned to their more-sober-than-not ways. This year, the number of young people planning to participate is just as high, with 52% saying they’re planning to take the month off drinking. The continued popularity of the event indicates that the sobriety shift is no fad: it’s a long-term trend that’s impacting the industry.

YPulse data shows 78% of Gen Z and Millennials who say they drink alcohol agree that “I don’t need alcohol to have a good time.” Where previous generations have looked to drinking as the main activity of a night out, these young gens are happy to pass the time without it. In fact, 40% say they drink less now than they did in the past, and 36% say “I make a conscious effort to limit how much alcohol I drink.”

On TikTok, the hashtag #DryJanuary2023 already has 7.1M views. Users share not only why they’re taking part, but how it’s positively impacted their life, and recipes for their favorite #Mocktails (which has 698M views of its own). While TikTok is more popular amongst young Gen Z, Millennials are certainly tapping into this kind of niche content on the app. And for younger users, it can influence the way they think about drinking as they grow up, possibly furthering the sober shift as they age up.

The popularity of pre-made non-alcoholic cocktails, buzzless spirits, and zero-proof brands have grown in tandem with young people’s sober-ish mindsets. They might even have a hand in driving it further, as marketing for these drinks steps up their game, making non-alcoholic beverages as trendy-looking as their counterparts. As brands focus on the market of non-drinkers, or sometimes-non-drinkers, they’re growing from “mocktails” to sophisticated brand experiences and designs that feel every bit as “grown up” as a classic drink. YPulse data shows 22% of young people who drink alcohol (and 29% of Gen Z who do) say they are interested in drinking lower-alcohol cocktails / drinks.

And while it might seem like they’re the one kind of brand who couldn’t, alcohol brands are also tapping into Dry January. Tito’s launched their DIY January campaign (and merch) with Martha Stewart to show young people how to upcycle their out-of-use vodka bottles into cleaning sprays and deodorizers. Their (already sold out) kit comes with the warning: “We can’t guarantee the outcome of these DIY uses for Tito’s – they are legally non-binding because this is a joke and we’re a vodka brand.” So, even though they aren’t offering a completely sober product, this quirky marketing (which apparently Martha Stewart is the perfect face for) lets young consumers know Dry January is not impossible, but that their favorite brands are there to support them until February.