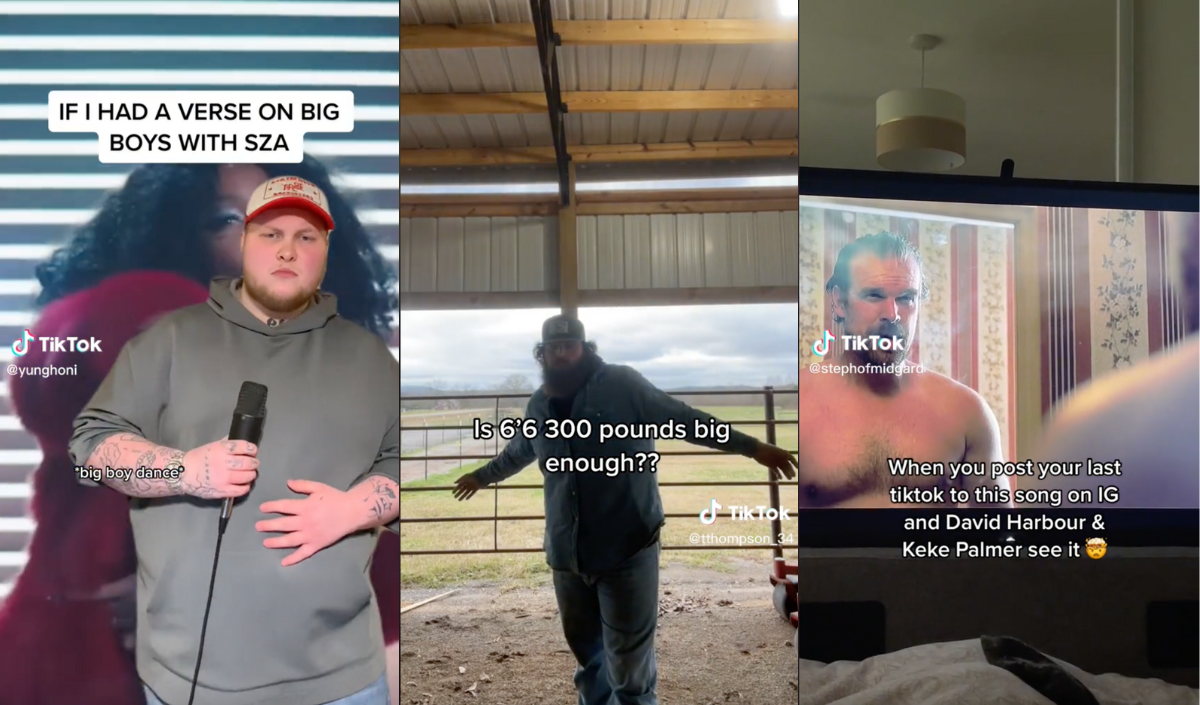 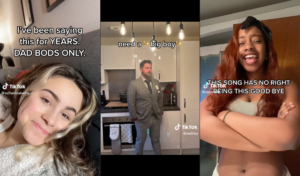 Gen Z’s favorite social platform is going back to its roots by making yet another song (and accompanying dance) go viral. SZA’s Saturday Night Live appearance helped boost excitement for her new album SOS, but fans have been making the song “Big Boys,” from one of the show’s skits, go viral alongside her album’s release. It’s grown so popular on TikTok that fans have even admitted searching for the song in the SOS track list until realizing it’s from SNL.

The hype is real and TikTokers can’t get enough: they’ve made #SZA, #SOS, and #BigBoy all appear under this week’s top trending hashtags on the app. Videos are covering an array of love for the artist with all sorts of subcultures hopping on the audio. There are those reacting to her lyrics (by either crying or dancing) and analyzing each word, and those who are making fan edits and thirst traps with their favorite “big boys” like Hopper from Stranger Things, characters from #BookTok fanart, and chunky cats.

SZA’s songs are dominating everyone’s feed and the support for “big boys” is bringing forth a newfound confidence among plus size men and has TikTokers commenting, “Love the big boys are getting a moment.” Girlfriends are showing off their “big boys” by dancing with their boyfriends to the track and one user, @yunghoni, even made his own verse that coincides with the SNL anthem—and gained 2.6M views. Users in the comments section of his video are practically begging for him to make it an official audio on TikTok. 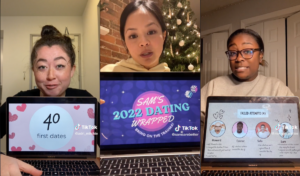 TikTokers have made their own “wrapped” for their dating lives

For Gen Z and Millennials on TikTok, end of the year wrap ups are for more than just Spotify. They’ll make a powerpoint of one for virtually anything—like how many times they cried, and now a breakdown of their dating life for the year. It’s hard to say exactly who started it, but one of the earliest videos of the #DatingWrapped trend (31M views) is from user Alexandria McLean, who flipped through her powerpoint of charts showing which apps she met her first dates on, what they did for the date, and ultimately who ended it.

Others have followed suit, including not only their cumulative stats, but creative charts of the zodiac signs they’ve dated, how much money they spent on dates, and the different careers of their dates. Creators in the trend are also making it a point not to be afraid to talk about all the unfortunate sides to dating. In fact, McLean says “it’s really cool that people were so vulnerable and open to sharing,” because “Dating can feel so isolating and almost upsetting sometimes.” Users shared how many times they were ghosted, how many people they cried over, and in the end, how nearly everyone doing the trend is still single. (But we know that young people have no problem with being single—and many of them use dating apps just to pass the time.) 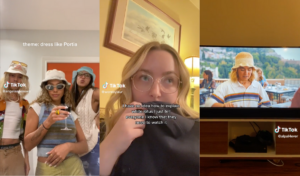 The second season of the HBO series ignited an online community comparable to The Bachelorette with passionate fan theories and many chiming in for post-episode commentary. The White Lotus has arguably blown up thanks to their Gen Z and Millennial cast—and wardrobes. But while the show’s second season has been producing tons of buzz online, one character’s style is definitely the most talked about topic. Gen Z icon Portia’s wardrobe takes major inspo from the gen’s actual TikTok trends (like Y2K being the most meme-able).

In entertainment, a character’s fashion can reveal a lot about who they are—and with her eye-catching looks including “funky sunglasses, clashing patterns, layered necklaces, a colorful sweater vest worn poolside, and various crocheted pieces,” the 20-something is getting Gen Z fashion right (although there are some pretty strong opinions about this). While she criticizes social media in the show, Portia’s fashion is taken right from TikTok, sporting brands that are popular among Gen Z like Stussy and House of Sunny, (a brand that skyrocketed in popularity last year thanks to TikTok and Instagram). YPulse research shows that social media (especially TikTok) is the top place young people look for fashion inspo. 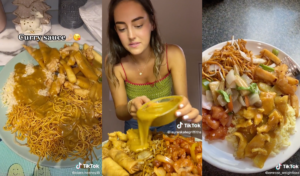 In Western Europe: #Chinesetakeaway is giving people the munchies

Foodie culture is changing; away from the flashy perfectionist nature of Millennials’ foodie culture, and towards the fast-food comfort food of Gen Z. While YPulse found that Western Europeans are more likely to eat in rather than order takeaway, WE Gen Z are more likely to post beverages/food on social media than their peers in NA. And Chinese food is currently taking the spotlight: #ChineseTakeaway has taken over TikTok, with 158.6M views and counting. People are posting their takeaway orders, with viewers and commentors either agreeing with the order or being repulsed by it.

User @laurenkategriffiths is one small U.K. creator that has gained popularity through her takeaway videos. From Indian to Wagamama to homemade food (and of course Chinese), her videos have got people hooked on seeing what she’s ordered—and watching her eat said meal. The comments to her videos of full of people getting the munchies and turning to a delivery app for their own. And while most Chinese takeaways under the hashtag contain salt and pepper chicken, crispy beef, and some fried rice with curry sauce, it’s still captivating young consumers when it comes up on their feed and might even get them to try something new too.

Movies: The new Spider-Man Across the Spiderverse trailer is here

2023: Pantone’s color of the year pulls from an appreciation for nature