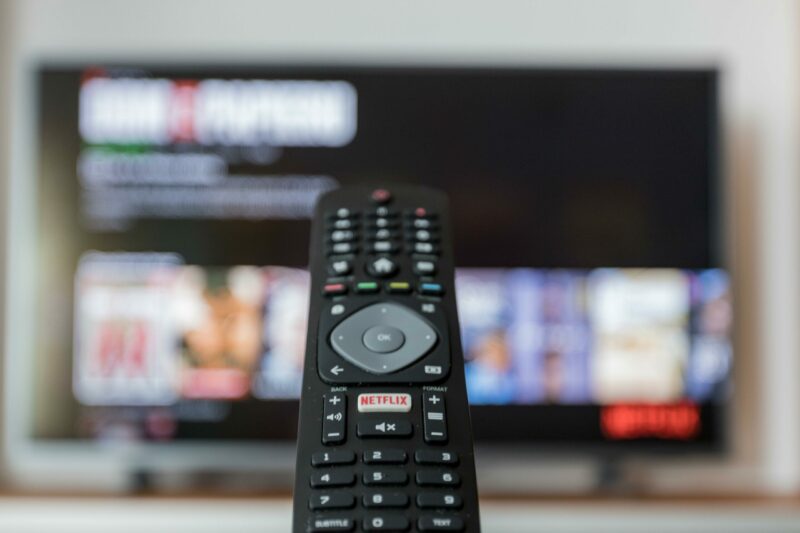 Young Europeans spend a lot of their time watching TV shows, and brands need to know which these ad-averse gens are actually tuning in to…

Despite all the time they spend watching content on social media, Gen Z and Millennials in Western Europe still love watching TV shows. In fact, it is one of their favorite hobbies, and one they share with their North American peers. Among all video content available for their entertainment, movies and TV shows are what young Europeans love the most. In YPulse’s WE Media Consumption Report, we asked European Gen Z and Millennials which content they’ve watched in the last week: movies (68%), and TV series (67%) came on top of the list, significantly outpacing social media videos (54%).

Brands need to be aware of a noticeable difference in the way young consumers in North America and Western Europe watch their favorite shows, and other video content. Young Europeans are still attached to old-fashioned television, and data from YPulse’s WE Media Consumption Report shows that they use this device to watch entertainment more than any other screen. In comparison, young North Americans have already cut the cable, and are using smartphones to watch video content more than any other screen.

But whether they use smartphone, TV, tablet, or laptop; one thing we know for sure is that young consumers love to keep up with their favorite shows. Knowing what these shows are is important for brands wanting to reach these gens—as the many brand collabs with TV shows prove. As part of the WE Media Consumption Report, YPulse asked 13-39-year-olds in WE what currently airing show is their absolute favorite, and these are their top responses:

Stranger Things is young people’s favorite show in WE

Stranger Things is the most popular show among Gen Z and Millennials in NA right now, and the passion for the show has made its way across the Atlantic, too (although it’s not WE Millennials’ top favorite show, but more on that later). Season four alone is Netflix’s second most highly viewed show of all time, just behind Squid Games, meaning it’s the most successful English language show), racking up over 1B hours in total viewing time.

The success of Stranger Things has impacted other industries, too: season four caused Kate Bush’s 1985 track “Running Up That Hill” to top global charts, and their collab advertising can teach other brands a thing or two about integrated marketing.

From beloved character cosplays to viral subtitles, Stranger Things also had a social media take over few shows could rival. When Netflix released a hint of the script for season five earlier this week on Instagram, fans were all over it to guess what the word “crawl” could possibly mean. And the IRL marketing campaigns for the show are memorable, too. For the release of season four, three vintage posters were posted on a billboard in Shoreditch, in East London. Over a few days, giant tentacles appeared—well, were built—and revealed a hole from which fans could grab…a slice of pizza.

WE Gen Z and Millennials have slightly different TV tastes. While Stranger Things is without a doubt the top show amongst young consumers overall, their other favs are ranking differently depending on their gen: 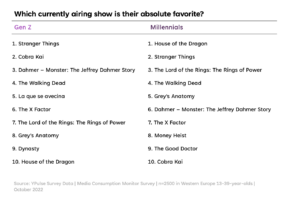 House of the Dragon is the top show among European Millennials, but is not as popular among Gen Z

With a huge fan base and growing popularity on social media—remember the viral edits of Daemon Targaryen?—House of the Dragon had all the ingredients to become a success. And it did: the show was the biggest most watched premiere in HBO’s history.

But it’s not the most popular series for Gen Z. For European Gen Z, Stranger Things, Cobra Kai, and the new Jeffrey Dahmer show take the top three spots. The success of Cobra Kai—whose fans are expectingly waiting for the release date of season six—shows how much young Europeans have an interest in the sports genre.

More so than the younger gen, Millennials in Western Europe are into medical shows like Grey’s Anatomy, and The Good Doctor, or into the fantasy world of House of the Dragon, and The Rings of Power. YPulse’s Media Consumption Report shows that fantasy is amongst the top ten types of video content young Europeans enjoy watching weekly. And with Disney+ growing in popularity in this region too, getting the hit medical drama Grey’s Anatomy (and all nineteen seasons) onto the platform is a great way to reach Millennials, and give them the variety they’re looking for on their streaming services.

Most of young European’s top shows are from Netflix, and this can be explained by the fact that Netflix is their favorite streaming platform, with 69% of young Europeans turning to Netflix to watch video content weekly. It’s reflected in YPulse’s brand tracker data too:. measuring European Gen Z and Millennials’ opinions on brands week-to-week from over 800 brands, our brand tracker shows that Netflix is the No.3 top YScore+ out of all brands, among all five Western European countries.

From creating more original content from international programs to producing viral documentaries about current issues, Netflix has been successful in catering to Gen Z and Millennials’ entertainment preferences. Plus, Netflix has just created a cheaper alternative available for U.K. consumers, as a way to ease the financial worries dominating young consumer lives amidst the cost-of-living crisis.

And Amazon scores quite well overall

Amazon spent more than $ 1 billion on the production of The Rings of Power, and it seems to be paying off—at least in terms of drawing in Gen Z and Millennial viewers, who are famously elusive. The show has quickly made it to the list of young Europeans’ top ten favorite TV shows.

Popular shows like The Rings of Power, and The Boys have brought attention to Amazon Prime Video as a serious competitor in the industry. And with 43% of young consumers tuning into Amazon Prime every week, Amazon can advertise its new productions on its own platform to Gen Z and Millennials in Western Europe easily, and at a low cost.