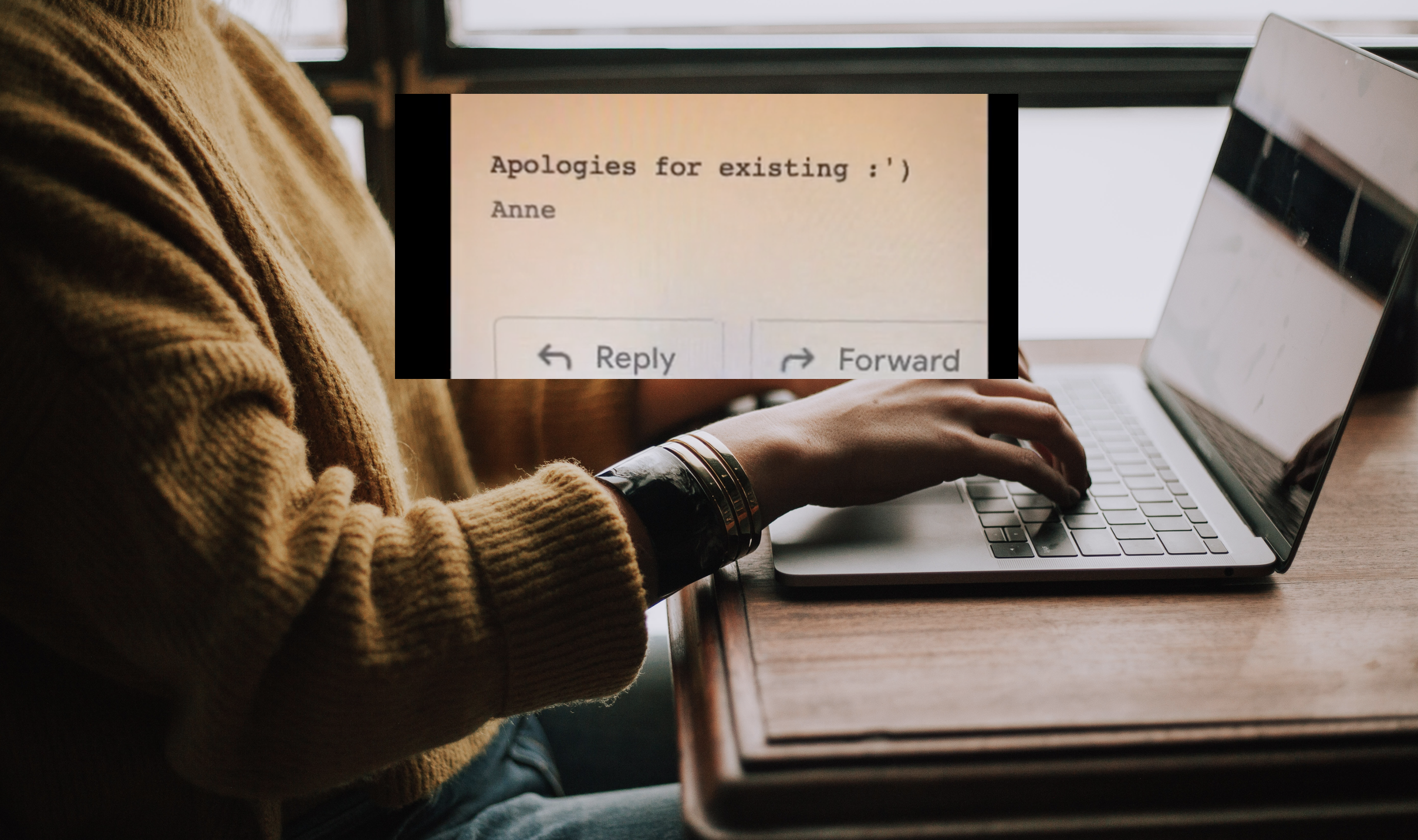 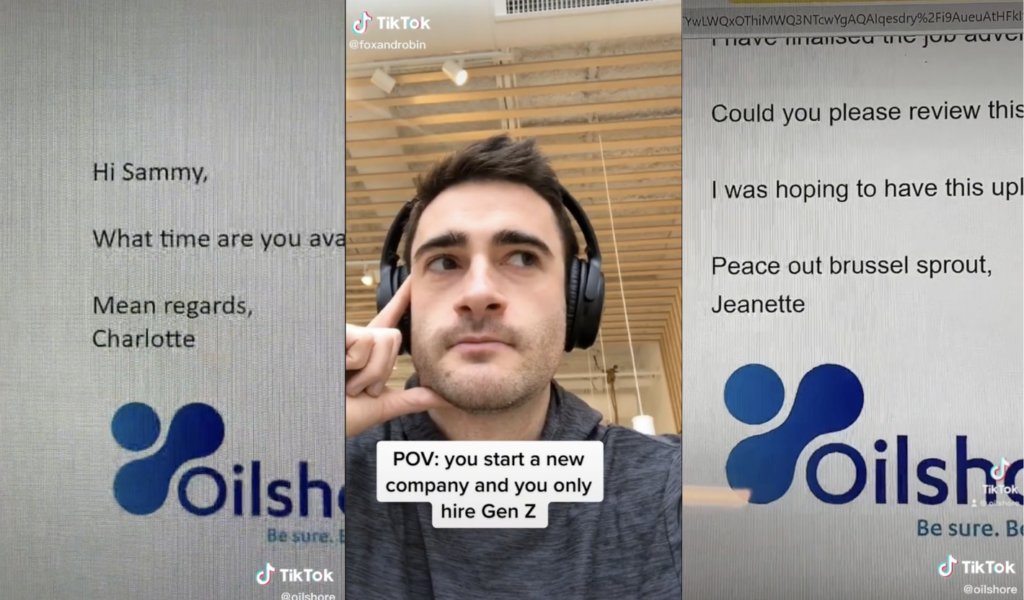 YPulse told you the workplace trends Gen Z is fueling this year, from open mental health discussions to “workleisure,” this gen is set on creating more comfortable environments. Now, thanks to TikTok, they’re embracing silly email sign offs that are replacing stale phrases like, “Sincerely,” “Best,” and “Let me know what you think” with phrases like “Lukewarm regards,” “alright alright alright,” and “another day, another slay.”

In a TikTok (with over 17.4M views) by Chicago-based athleisure company Fox & Robin, the 29-year-old Millennial founder writes, “POV: you start a new company and you only hire Gen Z.” He captions the video, “It’s a Gen Z world, I’m just their [M]illennial boss,” and shares some of the gen’s hilarious email sign offs like, “Let me know if you have any questions! Or don’t,” “you’re the best boss ever (lol jk),” and “Talk soon loser.” Phrases like “hasta la pasta” give employees a sense of personality and make them overall more motivated knowing they don’t have to sound like a robot.

Fox & Robin’s TikTok account received so much traffic after going viral that the founder even made a follow up video saying he received 1400 new applications from Gen Z saying how much they desperately wanted to work for the company. The video of course showcased some more cheeky sign offs. One applicant asked what positions were open and concluded the email with, “Living but not, Justin.” The company’s videos prompted other Millennial bosses to share their snarky Gen Z staff emails, with more chaotic phrases like, “Mean regards,” Bless up,” and “slay, serve, survive.” 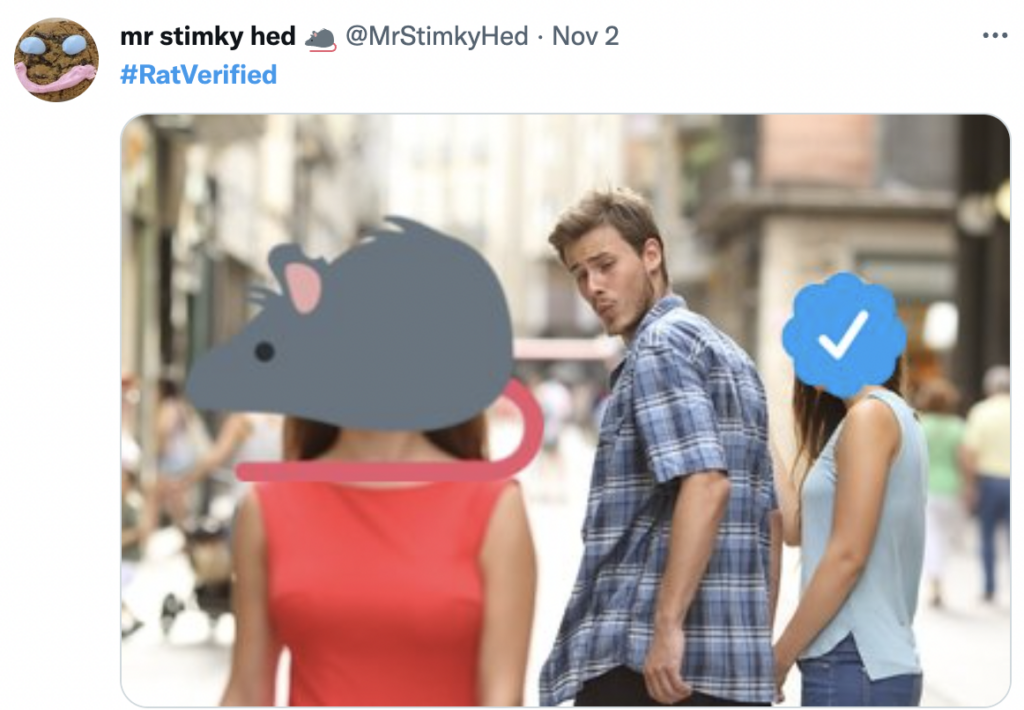 Twitter is pretty much in an uproar over the takeover, making #NewNameForElonMusksTwitter a trending hashtag. Threads include a slew of memes making fun of the fact that the richest man in the world is begging people for eight dollars. The New York Times says that Musk is trying to draw as much cash from the platform as possible after succumbing to financial pressures from the initial purchase. The billionaire and his cohorts are even discussing payments for direct messages and charging fees to watch in-app videos.

why would i pay $8 to get a blue check if i could put a rat next to my name for free???

i’m calling on everyone to join me in becoming #RatVerified

He’s already introduced a verification upcharge, where users will now have to pay double for a Twitter Blue subscription. Elon is ultimately changing what it means to be verified, many users and influencers with large followings are angered by the change and concerned over the regulation of fake accounts being made in their stead. And, of course, the generations whose biggest issue right now is inflation is protesting the move. Now, #RatVerified is trending on the app where users are joining an anti-Twitter Blue cult of sorts that places a rat emoji next to their handle instead of the blue check marks.

#BeautyTwitter is also responding to the verification news with influencers who have worked with Twitter’s creator team for years expressing their fears about their roles on the app for the future. “Skinfluencer” Tiara Willis made the statement: “The day we all saw me get verified on Twitter was such a moment 😭😭😭. It was like an ‘oh she made it’…Now you can just have it for $8, which is fine, but truly the end of an era.” 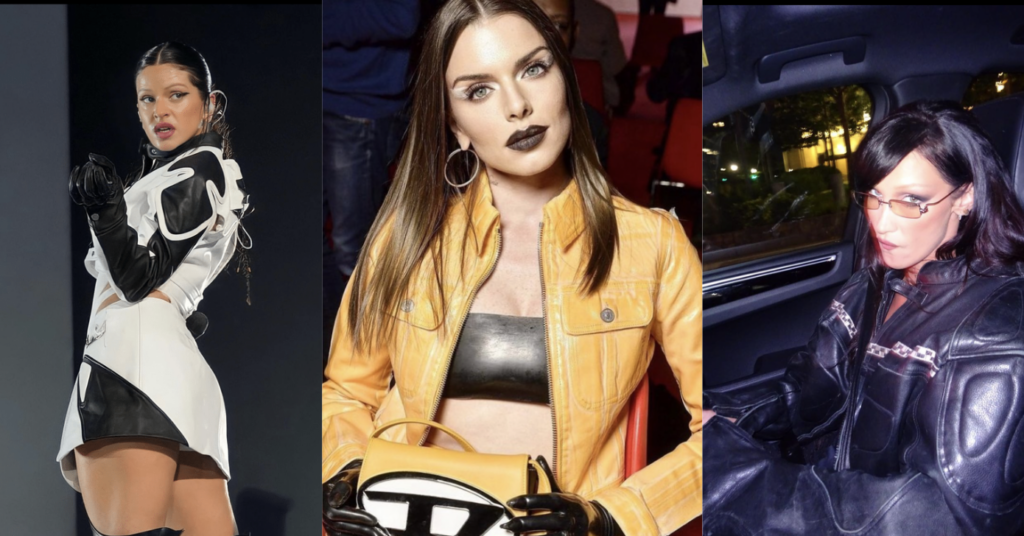 There’s another core aesthetic on the scene—or should we say on the streets?

Enter Motorcore, fashion’s latest take on Y2K nostalgia. Related to #Bikercore, #Motorcore taps into Formula 1 and NASCAR with Fast and Furious vibes. Looks for the newly emerging trend include lots of leather (faux of course if you’re a sustainable queen) from head to toe as well as varsity jackets, skin-hugging jumpsuits, sneakers / chunky boots, and of course flame-adorned accessories. Miniskirts are also an option, although they may not be very practical for a race car driver.

The idea behind the aesthetic is to serve looks that give off the impression that you’re about to have a wild time on the road, but essentially protect your body from reckless driving. While the #Bikercore look features more holes, cut-outs, and band-tees, #Motorcore gives off that same rock vibe, but with an edge of safety and professionalism. Super model Bella Hadid began sporting the look back in May, Rosalía rocked the trend for her “Motomami” album, and who can forget Julia Fox and Kim Kardashian in their head-to-toe leather and body suits?

According to global trend forecasters WGSN, a #RacerRevival is underway and being driven by luxury fashion’s newfound interest in F1. Diesel, Balmain, Givenchy, KNWLS, and Chanel’s Cruise 2022 collection all embody the #Motorcore aesthetic; even Ferrari has their own brand based on the core. While the look is seemingly easy to achieve, it may just be another ‘fit for the feed for Gen Z and Millennials; after all, most cores are. 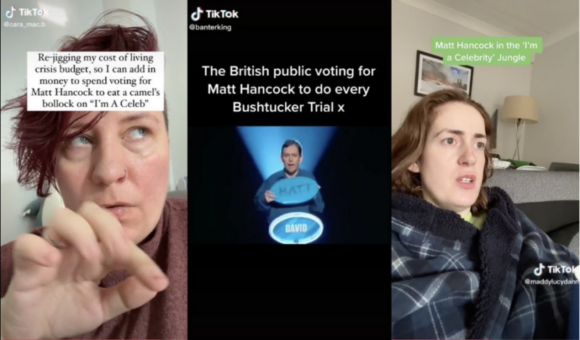 Matt Hancock, Conservative MP for West Suffolk and former Secretary of State for Health and Social Care during the pandemic, has made the decision to enter the jungle in the reality TV show I’m a Celeb…Get Me Out of Here. His decision comes with the viewpoint politicians must “go where the people are,” with the aim to bring awareness to his dyslexia and the charities he’s donating his fee towards. But it’s not been taken well by the British public. Many blame Hancock for the pandemic’s failings; little PPE, the lack of protection for care homes, and overall the reason for such a high death toll. So getting classed as a “celebrity” and entering one of the most popular reality shows doesn’t sit well. Hancock has since been suspended as a Tory MP, with the Prime Minister Rishi Sunak saying MPs should be working hard for these constituents during a challenging time for the country. Meanwhile the deputy chairman of West Suffolk Conservative Association has said he’s looking forward to Hancock “eating a kangaroo’s penis.”

Similar sentiment has been expressed by TikTok users too as they eagerly get ready to vote the politician into every bushtucker trial. As part of the typing on their phone trend, @cara_mac.b posted a video with the caption “re-jigging my cost-of-living budget so I can add in money to spend voting for Matt Hancock to eat a camel’s b*llock.” More well-known creators like @maddylucydann have voiced their opinion in a comedic fashion. Doing a role play of Hancock in the jungle and digging into his revealed affair broke pandemic protocols and got him sacked. It’s clear it’s going to be a very biased season, making it easier for other contestants as viewers pick on the politicians. Young Europeans still love watching tele, much more than their North American counterparts (as discussed in the Gen Z 101 webinar), and U.K. consumers are more likely to turn to reality TV for weekly video content than their European counterparts. Managing to snatch the disliked MP could get people tuning in more, and get I’m a Celeb (which has been dropping viewers by the millions) back to its former glory.

Heidi Klum always wows fans with her ability to become unrecognizable on Halloween, and this year her worm costume was amazingly strange

Instagram is telling people they got deactivated following their outage