NA vs WE: How Does Their Drinking and Smoking Compare? 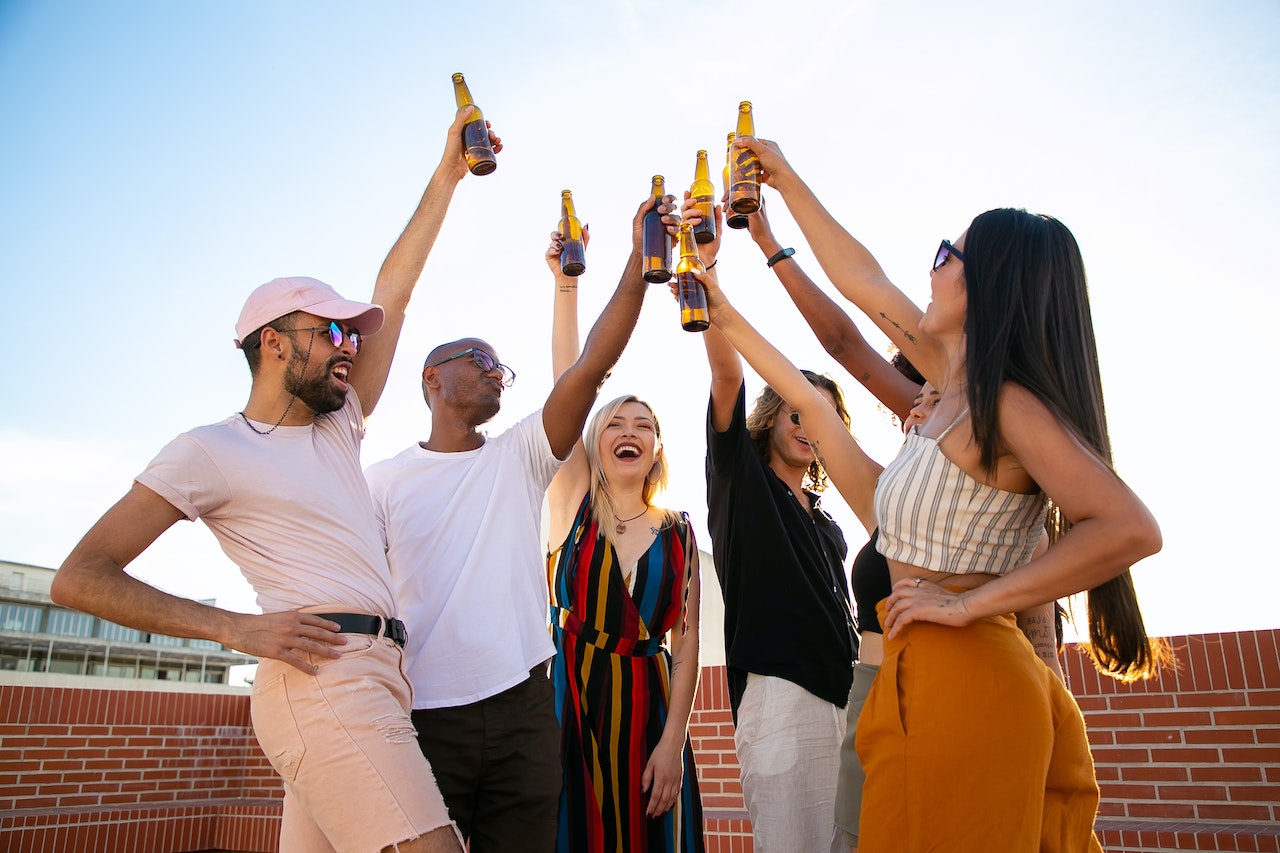 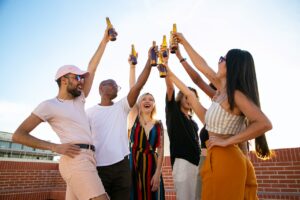 Gen Z and Millennials are known for their moderation. So how does that compare in Western Europe vs North America?

For years now, Gen Z and Millennials have proven themselves to be largely disinterested in the typical risky behaviors of generations past, becoming a group of young people pushing moderation into the mainstream—and pushing substance abuse statistics to their lowest levels in years. Headlines in the U.S. have declared that “Teenagers are better behaved and less hedonistic nowadays” and that “Gen Z is too busy to drink or do drugs.” And studies have shown that, in the U.K., these gens drink less, take far fewer drugs, and have made teenage pregnancy “a near anomaly.” Meanwhile, YPulse research has shown that Gen Z and Millennials have fueled the Sobriety Shift in both regions as they embrace moderation and prioritize their wellness, as well as no- to low-alcohol alternatives.

Of course, the pandemic threw a wrench in their abstinence for a little while. YPulse research (and many other studies) found that drinking did spike at the start of the pandemic as young consumers sought ways to cope with the stress and boredom of the first wave of lockdowns, while the Global Drug Survey found that U.K. citizens used more cannabis and prescription drugs in 2020 and 2021 than in years past. And while our 2021 Health, Drugs, and Risky Behavior report found that the pandemic made risky behaviors seem less risky in the minds of young North Americans, this year’s report shows that much of their use of various substances has leveled off. Meanwhile, the majority of young consumers in Western Europe report having never experimented with any drugs, and a recent survey from Drinkware found that 16-24-year-olds are drinking less than any other age group, with 26% “fully teetotal,” a.k.a. alcohol-free.

Clearly, this general shift away from substances is happening in both regions. But are young Europeans and North Americans abstaining from the same vices at the same levels? In our recent Health, Drugs, and Risky Behavior survey, we asked young consumers 18+ (and 21+ among young North American drinkers) to tell us how often they’re using the most common (and mostly legal) substances. When we look at those who are partaking monthly or more often, it’s clear there are some differences: 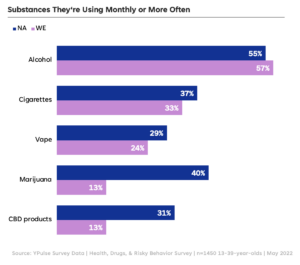 Young Europeans are using every substance but alcohol less than Americans

Western European countries are known for their pubs, wine culture, and beer gardens, and though they are increasingly sober-curious, it appears that they’re keeping their drinking culture intact slightly more than their American counterparts. Indeed, 30% of young Americans 21+ tell us they never drink compared to 23% of young Europeans, showing that the Sobriety Shift is bigger in the U.S. But this isn’t the full picture. For young Europeans, it may be more about moderation than abstinence—just 5% of young consumers in the region drink daily compared to 11% in the U.S. Meanwhile, the largest portion of young Europeans is drinking monthly (27%) while in the U.S., the largest portion is drinking weekly (25%). In other words, young Americans who do drink are doing so more often.

Young Europeans are also using tobacco less than young North Americans, both in the form of cigarettes and vaping, which could have something to do with the stricter regulations and anti-tobacco campaigns across Western Europe. Vaping blew up in 2018, becoming one of Gen Z’s main vices and leading U.S. lawmakers to create bans in an attempt to curb the rise of vaping teens. In Western Europe, much of these stricter laws came to be in 2016—before the craze began—and the EU also has tighter restrictions on the level of nicotine allowed in e-cigarettes, meaning young Europeans who do vape may not be as addicted. Meanwhile, cigarette packages in the EU are covered in visual health warnings, which have worked to reduce cigarette consumption in the region—and could be part of why young Europeans are smoking less than young North Americans.

Millennials’ interest in cannabis has been pushing the substance into the mainstream in the U.S. and fueling the burgeoning cannabis economy for years now. And every year, YPulse has seen the number of young consumers using cannabis and CBD rise (just take it from our 2021 article “Millennials Are Smoking More Weed Than Ever”). Now, just 47% of young North Americans say they never use marijuana, and 57% never use CBD. And when we ask young North Americans to rank how harmful certain substances and behaviors are on a scale from 1-10, these gens consider marijuana less harmful than fast food.

The picture looks a little different in Western Europe, though, where cannabis is still largely illegal. Just 22% of Millennials and 13% of Gen Z in the region have tried cannabis, and 78% say they never use cannabis and 79% CBD. But that doesn’t mean they’re not eyeing the industry. Nearly two in five say they’re interested in CBD-based gummies, beauty products, and beverages, and CBD / cannabis is one of the health trends they’re interested in now, indicating that the substance is ready for its glow-up from illicit drug to wellness elixir in Western Europe, too. And it’s not like consumers, brands, and politicians in the region aren’t trying. Medicinal cannabis is slowly becoming legal across Europe with some talk of recreational reform, and a recent survey found that more than half of Europeans support this move. Though CBD wellness brands and products haven’t permeated Western Europe at the same level as North America, the industry is heading in a similar direction. Meanwhile, it’s estimated that the CBD market could be worth €1.5 billion by 2023. Though young Europeans are abstaining now, broad legalization could see their use rate catch up to North Americans’ in a few years.