Is Microdosing The Next Therapy Trend For Young Adults? 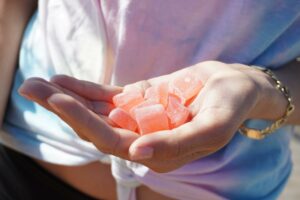 Yes, seriously, young adults are interested in microdosing in their day-to-day lives…

Gen Z and Millennials are the most anxious generations–and that was true before the pandemic. They’re also very open about their mental health, and always looking for ways to manage their stress. YPulse’s mental health research shows that they’re interested in a wide range of activities to combat their anxiety, from mindfulness to prescription meds. Half tell us that they’ve spoken to a mental health professional. But they’re also open to trying other methods of therapy, with a third saying they’ve tried holistic remedies like CBD, probiotics, melatonin, etc. And some of these gens are embracing even more non-traditional approaches—including new ways to use non-prescription drugs.

YPulse has seen an increase in psychedelic use among young people in the last few years. Our Health, Drugs and Risky Behavior report shows that 10% of 13-39-year-olds report that they have experimented with mushrooms for recreational use, up from 5% in 2019. Meanwhile, 7% report that they have experimented with LSD, up from 4% in 2019. In these same years, we’ve also seen a significant uptick in the conversation around microdosing.

The practice refers to taking tiny doses of psychedelic drugs (not enough to induce a full-on trip) on a near-daily basis, and some are advocating the practice as a way to manage long-term struggles like anxiety and depression. Though the idea of microdosing goes back to research from the 1960s, it only began to gain popularity recently. The concept might seem drastic to some, but what about Gen Z and Millennials? Are young people seriously taking hallucinogens on a daily basis?

The short answer is yes, and taking a look at these three stats on young adults’ relationship with microdosing, you might see a new trend emerging in the mainstream soon: 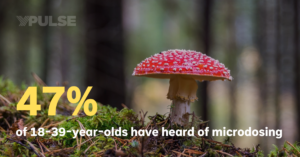 Half of young people have heard already of microdosing

Though it’s not quite the majority of young adults who know about microdosing, a significant number of 18-39-year-olds do, considering the practice hasn’t been well-known for long. A few years ago, hardly anyone had heard of it, let alone done trials on its effectiveness. Now, many health professionals are pushing for legalization of psychedelics to make it more widely available and accepted. It’s clearly becoming a more mainstream concept quickly, and it’s certainly not hard to find the sources they’re learning from. Mainstream publications like the New York Times, Vox, and even Forbes are writing about the reported benefits of psychedelics, and in 2020, Netflix produced a whole documentary of celebrities talking about their experiences with hallucinogens. Megan Fox talked about her apparently soul-changing experience with ayahuasca on Late Night with Jimmy Kimmel—suffice to say the stigma that once existed around these drugs is breaking down in the younger gens. 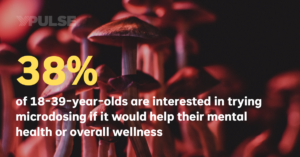 Many young adults are ready to test microdosing for themselves

While only 12% of young adults say they have experimented with mushrooms, more than a third tell YPulse they’re interested in trying microdosing if it would help their mental health or overall wellness. Nearly all (91%) of young people say that mental health is important to them, and 67% of 18-39-year-olds say they constantly feel stressed–so is it any wonder they might be open to microdosing? When we ask about how harmful a variety of substances are to one’s health, young people rate anxiety/depression as more harmful than LSD or mushrooms. There’s plenty of anecdotes to encourage their interest in microdosing, with magazines like Nylon even publishing guides of how to know which psychedelics are right for them. Psilocybin mushrooms are not legal to procure everywhere just yet, but some researchers think approval from the FDA to use them as mental health treatment is on its way. 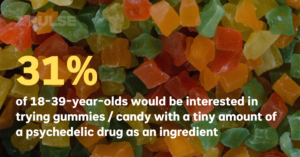 If microdosing psychedelics came in the form of a candy, they’d be willing to try it

When asked if they’d be interested in trying gummies / candy with a tiny amount of a psychedelic drug as an ingredient, 31% of young adults say they would—nearly as many who would try the much more mainstream CBD products (35%). Lucky for them, these products are already on the market, with whole companies existing just for microdose gummies. These are not the only kinds of products they’re interested in though, as 25% said they would try a drink and 17% said they would try beauty products with tiny amounts of psychedelic drugs in them. Vox is calling this wave of normalizing and decriminalizing mushrooms the “new definition of sobriety,” which is yet another sign these mental-health-conscious young adults are revolutionizing every part of the world they want to live in.