Media Brands Are Blurring the Lines Between Gaming & Other Content

Every brand in the world is competing for time on Gen Z and Millennials’ screens, with TV content having to battle against more and more entertainment formats. Of course, there are more screens than ever before, and on those screens more distractions from what was once the main focus (TV). And for these gens, gaming has become one of TVs biggest rivals. In 2018, YPulse’s State of Gaming trend report found that gaming was taking up nearly as much time as watching TV among young consumers, with the majority playing weekly on mobile, console, or computer. In the years since, their gaming has only picked up. YPulse data also shows that nearly two thirds of Gen Z and Millennials say playing video games is more entertaining than watching TV and movies.

In order to reach the growing consumer base that is gamers, many brands are utilizing spaces like the metaverse for marketing, but others need to go farther than a feature—cue the growth of entertainment’s gamification.

Our Media Consumption report shows that 51% of young people are interested in interactive content. Netflix hopped on this trend early, seeing major success all the way back in 2018 with their interactive movie Black Mirror: Bandersnatch. But since then, the platform has moved from experimenting with “choose your own adventure” programming to experimenting with actual video (and mobile) games based on content, and the lines between gaming and other entertainment formats are continuing to blur.

YPulse predicted the trend of more gamified entertainment at the beginning of 2022, forecasting that the lines between traditional entertainment media and gaming will continue to disappear. Last year, several brands (including Netflix, Zoom, and Peloton) launched video games within their existing platforms, testing the waters of integrated gaming options. This year they’re going farther in, and some brands are even taking the leap into separate apps for gaming development. Here’s how three major media brands are continuing to make gaming a part of their futures… 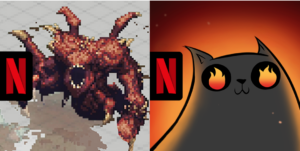 YPulse data shows that Netflix is the top service young people are watching weekly or more, but short form content platforms have been climbing the ranks. To keep viewers actively engaged, they’ve been developing both games and interactive content for subscribers, as they aim to stay on top by differentiating themselves from other streaming services.

Netflix began their expansion into video games last year with five mobile games that could be played by any user at no extra cost to their existing subscription. The games exist on a tab available only on mobile, an apt choice considering YPulse data shows that’s where the younger gens are spending the majority of their screen time, far more than anywhere else. Some were based on their already existing content, like fan-favorite series Stranger Things, while the others (Shooting Hoops, Card Blast, and Teeter Up) were self-contained mobile games like any other. In May, they launched another in-app game, Exploding Kittens – The Game, which builds on the existing card game and mobile game, and will be accompanied by a full animated series next year.

They’ve also continued developing choose-your-own-adventure series, releasing Cat Burglar in February—their first piece of interactive content since 2018. It exists in a similar style as Bandersnatch, but uses trivia to advance the plot.

HBO is turning their hit shows into character-driven games

The only streaming service who’s dared to go outside their existing platform with a game is HBO, when they and Issa Rae partnered with Black women-founded Glow Up Games ahead of the Insecure series finale to launch Insecure: The Come Up Game. The game is its own mobile app in which players can immerse themselves into the show’s setting and similar scenarios, while Issa and her friends serve as their guides.

YPulse’s Gaming research found that 75% of 13-39-year-old BIPOC consumers say they wish video game characters were more diverse—and according to Glow Up Games CEO Dr. Mitu Khandaker: “Our mission is to create innovative game stories that center Black and Brown joy… I’m proud of the amazing, diverse team that my co-founder Latoya Peterson and I have built together, as we endeavor to change the games industry in the way that Issa is changing Hollywood!”

More recently, HBO created an immersive AR experience preceding their new House of Dragon series called House Of Dragons: DracARys. The Tamagotchi-style format allows players to “become their own mother of dragons,” immersing them in the fantasy world, and enlisted the developers of Pokémon Go to make the show come to (virtual) life. The majority (60%) of Gen Z and Millennials tell YPulse they’re more likely to play a video game if it’s based on a book or movie, and HBO is doing their best to check all their boxes for gamification.

TikTok is young people’s favorite app, by far, but even the platform-on-the rise is figuring out ways to integrate gaming into their features. In June of 2021, they launched the in-app minigame Garden of Good, which allowed users to raise funds for Feeding America by playing. Beyond that, there are rumors of further gamification, such as word of tests being conducted so “users can play games on its video-sharing app in Vietnam.” Reports also circulated earlier this year that the app would be expanding into interactive LIVE minigames with features like screen sharing. These LIVE games could increase interactions between creators and their followers, allowing them to literally play together in real time.

They’ve got plenty of popular creators streaming video game content in the app, and in May they announced that a subscription to LIVE videos would be going into beta. This addition will help TikTok advance toward the relationship streamers have with platforms like Twitch and YouTube, by offering subscribers a number of perks, including subscriber-only chat rooms, custom emotes, and badges. Yet, the platform intends to stand out from the competition with even more subscriber offerings, like the ability for users to control the cameras on livestreams. YPulse data shows that 25% of Gen Z and Millennials are already paying for gaming subscriptions.

North America
Taylor Swift is The Newest Celebrity Private Jet Controversy on The Viral List
TL;DR Taylor Swift has been called out for having the highest emissions of...
North America
4 TikTok Influencers You Haven’t Heard of Yet, That Millions of Gen Z and Millennials Have
“I never expected this to blow up” is the new “thanks for one million subscribers” ...
Western Europe
4 Brands Championing Female Sports in Western Europe
Female leagues and athletes have historically been underrepresented in the sports w...