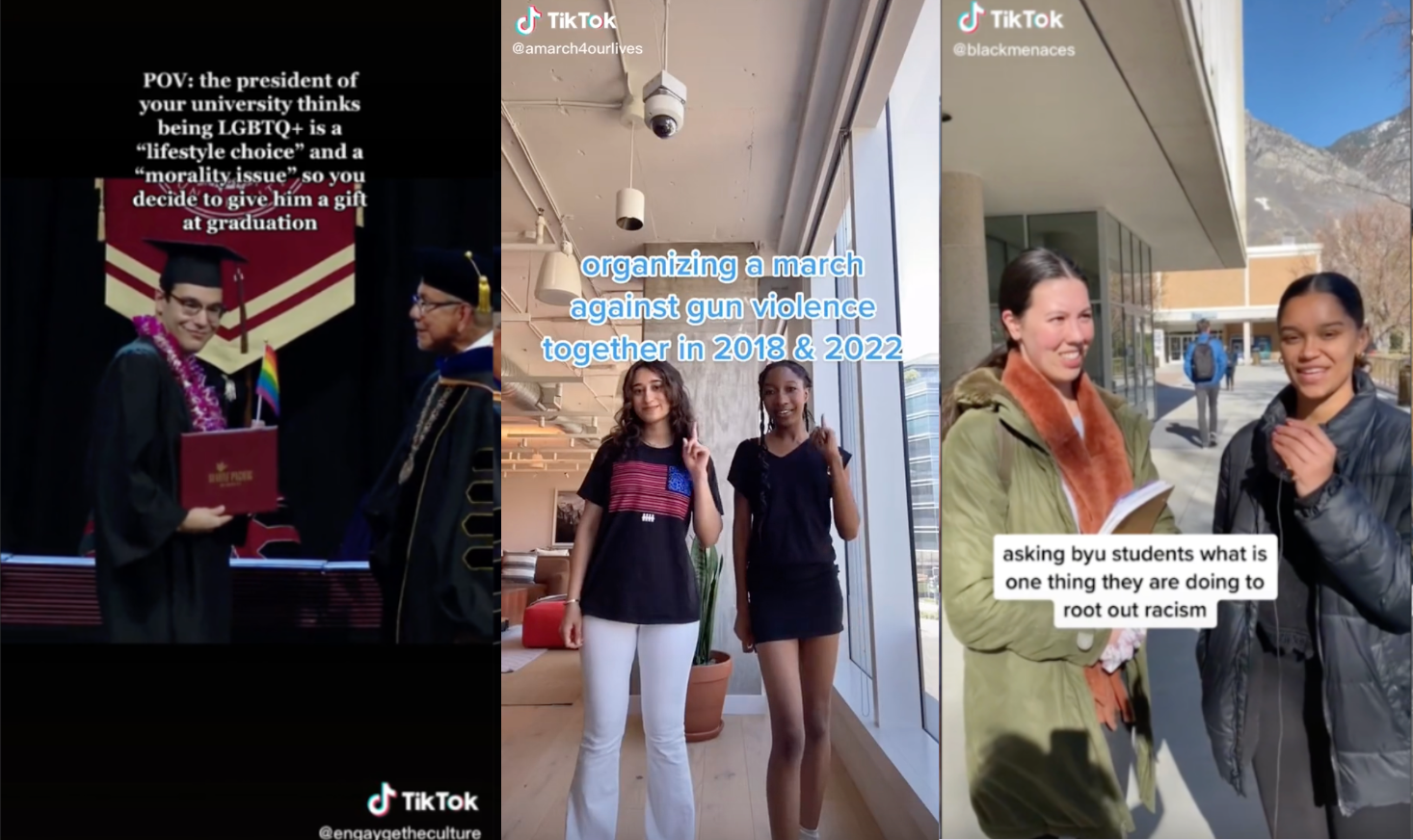 YPulse’s recent causes/charity and activism report shows that the majority of Gen Z have taken action to support a social cause. From racism to COVID-19 to LGBTQ+ discrimination and rights, we told you about the top social causes young people are passionate about right now and that they want brands to support. Our research shows that Gen Z and Millennials think issues like racism, women’s rights, and homophobia are getting worse in the U.S., but young consumers are also changing the game when it comes to digital activism and are unafraid to call out injustices they see in the world. For Gen Z students, social media is amplifying what might once have been activism isolated to just one campus into bigger stories drawing attention to the issues that matter to them. Here are just some of the ways young students have recently been calling out and addressing issues in their respective communities, and used social media to spread their stories: 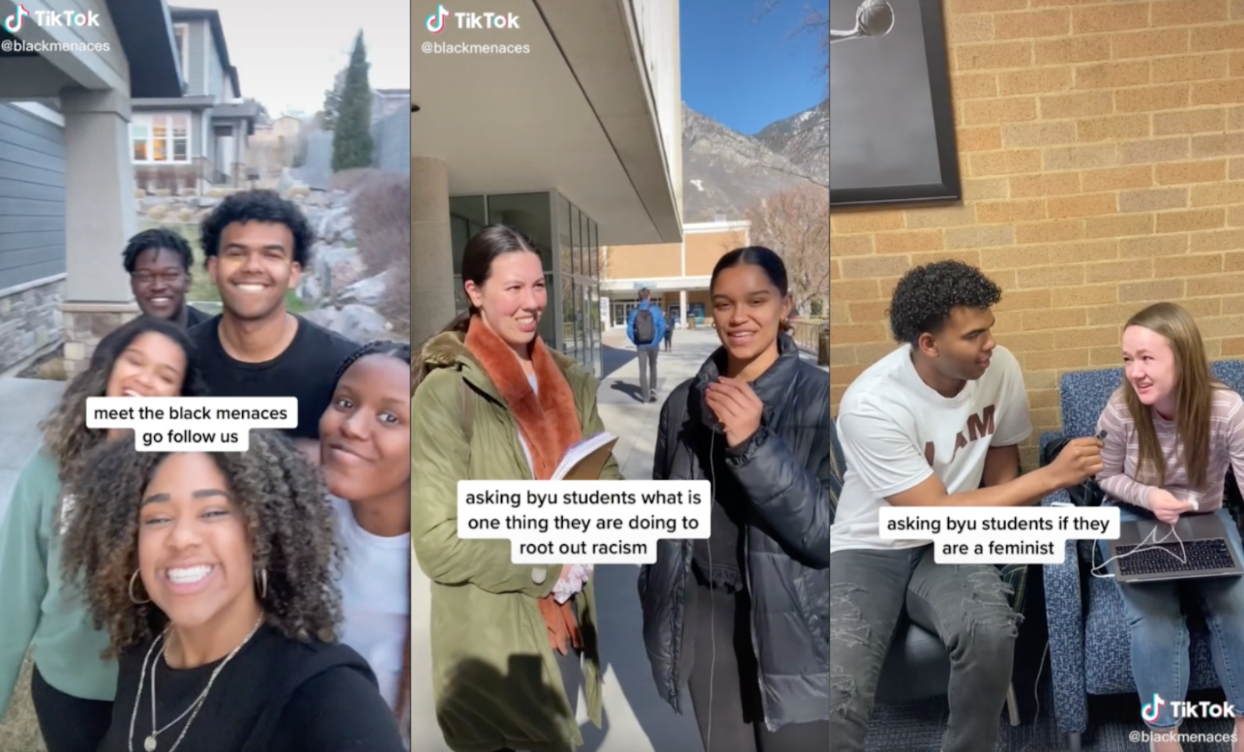 The Black Menaces Talking About Race & Politics at BYU (and more campuses)
The Black Menaces is a TikTok group that wants to educate the students of Brigham Young University on race and politics. BYU is perhaps one of the most conservative private schools in the country and is sponsored by The Church of Jesus Christ of Latter-day Saints—and only 1% of the student population is Black. However, a newly formed TikTok group created by Black BYU students is attempting to bring a more inclusive mindset to the campus. The Black Menaces, which has more than 720K followers, is composed of Sebastian Stewart-Johnson, Rachel Weaver, Nate Byrd, Kylee Shepard, and Kennethia Dorsey. They go around campus and ask students questions related to race and politics from “What are you doing to root out racism in your life?” to “how often do you think about race?” Their videos garner hundreds of thousands of views, and in the last year Black Menace groups have been started on more campuses as a result of their social media popularity. The Black Menace TikTok is now sharing videos from San Francisco State University, Utah Valley University, and has also launched a podcast. YPulse’s causes/charity and activism research found that racism is the top issue young people are passionate about right now, and as BIPOC influencer houses continue to emerge on TikTok, The Black Menaces is certainly one to keep an eye on. 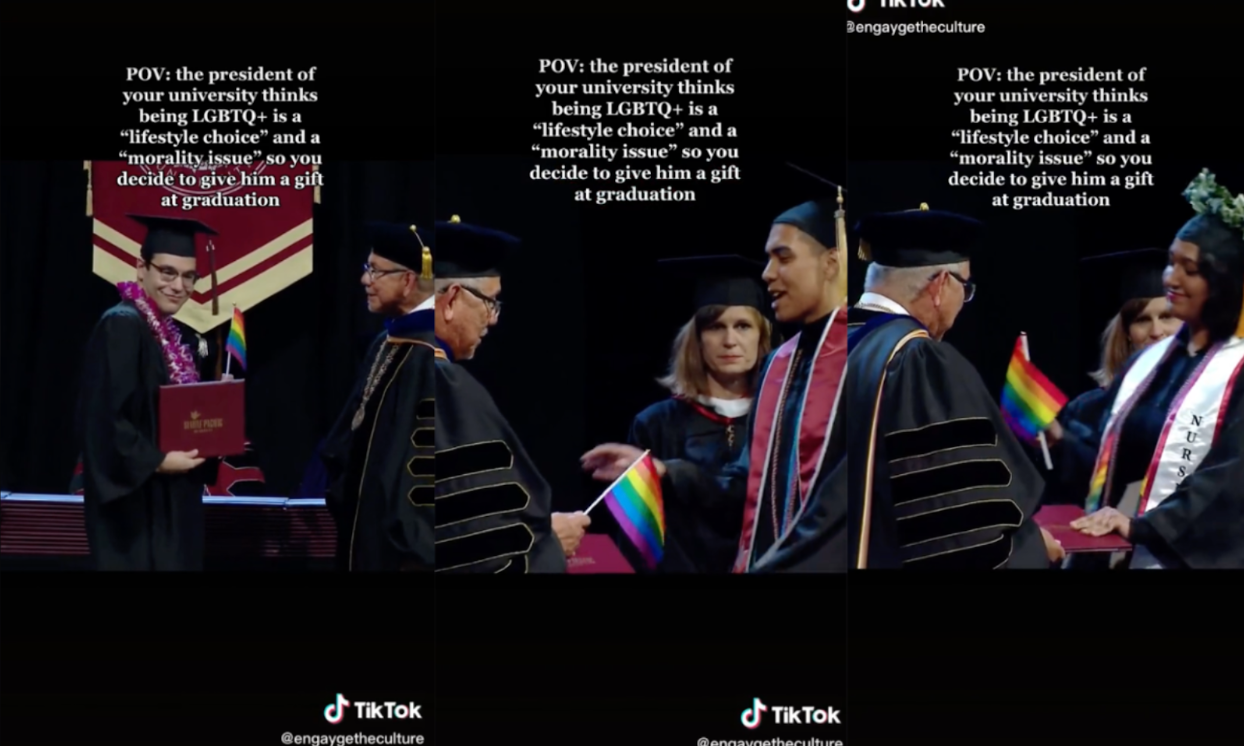 Seattle Pacific University’s ASSP Speaking Out Against Anti-LGBTQ+ Policies
It’s graduation season—and at Seattle Pacific University’s graduation ceremony this month, a group of students from the college’s Associated Students of Seattle Pacific (ASSP) used their graduation moment to protest against the college’s anti-LGBTQ policies. According to its website, SPU is a religious educational institution affiliated with the Free Methodist Church—and students have been working all year to fight back against its Employee Lifestyle Expectations policy, which bans “sexual behavior that is inconsistent with the University’s understanding of Biblical standards.” The student organization’s efforts came to a head during the school’s graduation ceremony when around 50 graduating seniors each handed a Pride flag to the university’s interim president, Pete Menjares, while receiving their diploma. The action was all caught on video, which went viral on TikTok. @engaygetheculture’s video, which received 3 million views, features the caption: “POV: the president of your university thinks being LGBTQ+ is a “lifestyle choice” and a “morality issue” so you decide to give him a graduation gift,” and shows student after student handing a rainbow flag to Menjares as they take their diplomas. Another video on the account shows clips from protests that took place earlier during the school year. Menjares said in an email to NBC News that Sunday “was a wonderful day to celebrate with our graduates. Those who took the time to give me a flag showed me how they felt and I respect their view.” YPulse research found that LGBTQ+ discrimination / rights a one of the top social causes that young people are passionate about—and that they want brands involved in. 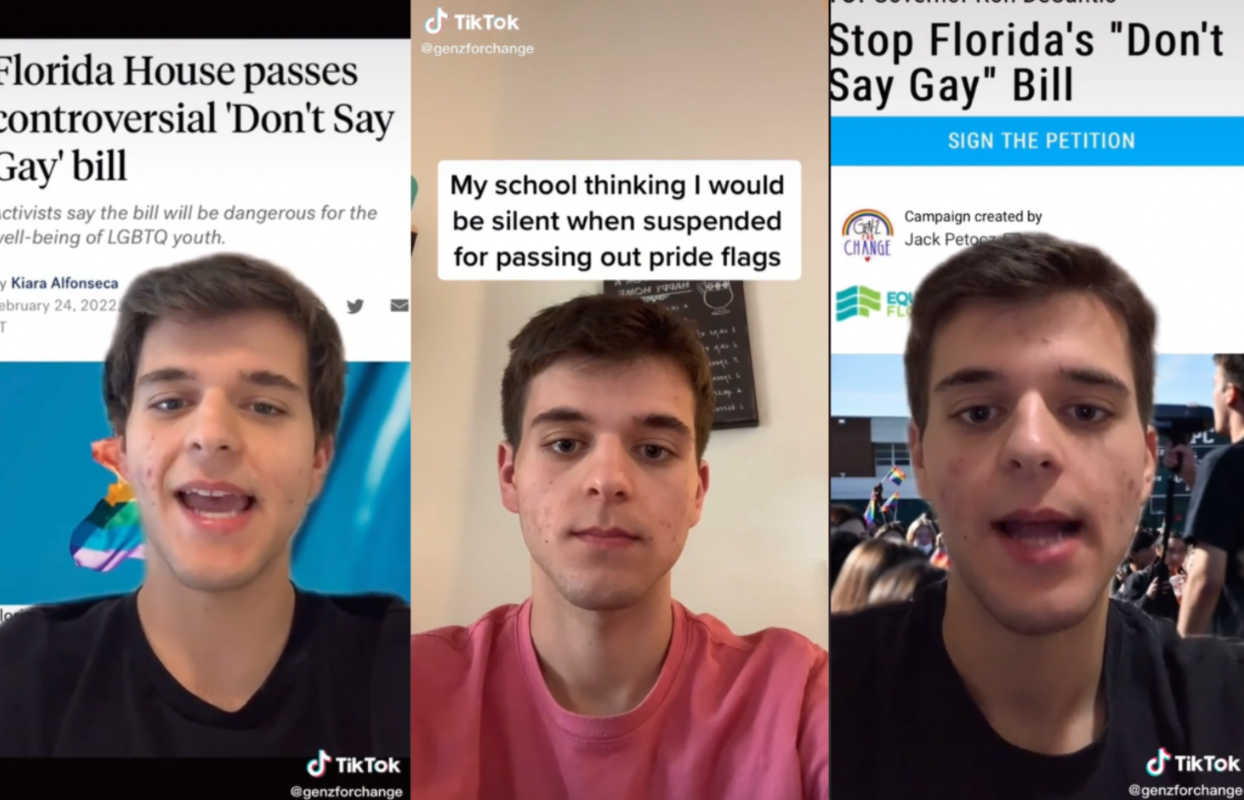 Students in Florida Speak Out Against the “Don’t Say Gay” Bill
Florida students aren’t staying silent about the state’s “Don’t Say Gay” bill. In March, Florida’s state Senate voted to pass the Parents Rights in Education bill (commonly referred to as the “Don’t Say Gay” bill), which blocks school districts from talking about sexual orientation and gender identity with students. It was signed into law on March 28th, and the weeks surrounding the bill’s passing, students held major demonstrations to protest, while taking to social media to share the effects it will have on LGBTQ+ youth. Students traveled to the state’s capital to meet with lawmakers and plead their case with LGBTQ organizations, held statewide school walkouts (the student who has been organizing the walkouts has even gotten suspended and gone viral on social media for sharing his story), and posted on TikTok via the Gen-Z for Change account to build national awareness for their fight. Disney employees (including current and former actors, parks employees, and more) also spoke out against the bill after it was made public that Disney had previously donated to politicians who pushed the legislation forward and CEO Bob Chapek refused to publicly condemn the bill in an official statement. YPulse’s causes, charity, and activism research shows that LGBTQ discrimination / rights is a leading social cause Gen Z and Millennials are passionate about right now, and their protest of the “Don’t Say Gay” bill marks yet another example of how these activated generations aren’t afraid to demand change from lawmakers and companies. 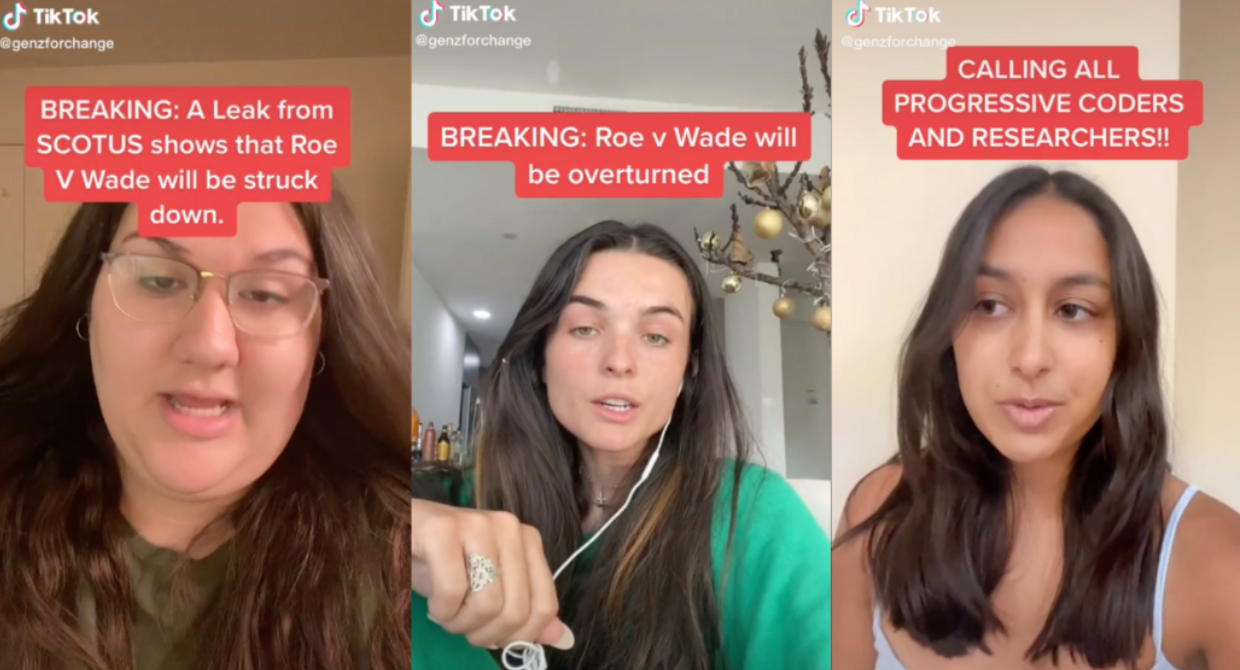 Youth-Led Organizations Speaking Out Against Roe v. Wade
Gen-Z for Change is a nonprofit activist group recruiting young people to flood anti-abortion sites following the news about Roe v. Wade. TikTok has become a vehicle for digital activism and following the news of the leaked draft opinion revealing the Supreme Court’s plans to overturn Roe v. Wade, young activists went online to organize ways to fight back. Gen-Z for Change is one of the groups that quickly responded. Launched in 2020, it joins the growing number of activist groups and movements, like March For Our Lives and Sunrise Movement, led by young people who want to protect their rights and create a better future for their generation. The Gen-Z for Change account posted three TikTok videos (all of which racked up millions of views) about the draft opinion, informing their followers about what it means and how they can get involved. Aside from educating its followers online, the group is recruiting coders to build systems that can crash future anti-abortion sites, especially in the states where abortions would be completely outlawed. Since the Supreme Court officially overturned Roe v. Wade, the account has continued to post content to keep viewers informed, educating about a post-Roe future, and encouraging action. YPulse research found that abortion / birth control was a top social cause that Gen Z are passionate about before the decision was overturned, and we’ll likely see their passion about the issue continue to grow.

North America
3 Movements and Activist Groups Started by Gen Z, for Gen Z
Digital Activism Has Turned Into These Non-Profits Taking on Gen Z’s Biggest Causes...
North America
TikTokers are Slapping Each Other with Tortillas on The Viral List
TL;DR: The tortilla challenge is the latest trend taking over TikTok and i...
North America
4 Apps Attracting Gen Z Users With Anonymity & Authenticity
These four apps have been popping up everywhere and gaining Gen Z users’ attention ...