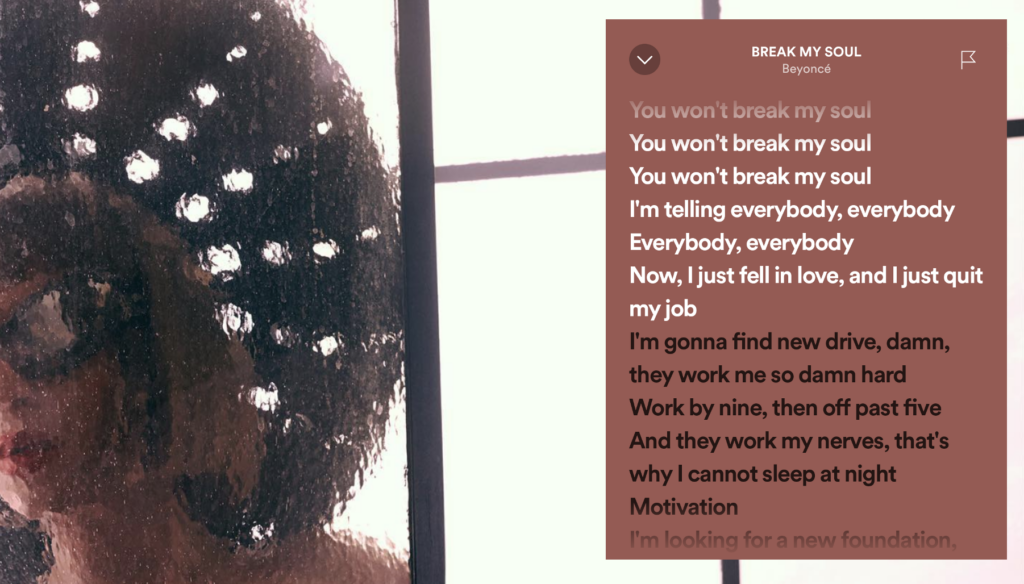 Beyoncé’s New #Antiwork Anthem is the Song of the Summer
YPulse told you that Beyoncé is one of Gen Z and Millennials’ favorite musicians, so of course, her fans were excited when she announced that her upcoming seventh studio album “Renaissance” would be coming next month—and dropped a new song from it all in the same week. On social media, fans are avidly showing their love for “Break My Soul,” a dance track in which the mega popstar sings about quitting her job and letting go. The internet, and music charts, have been taken over by #BreakMySoul, with @chartdata revealing on Twitter that the song debuted at the #5 spot on the global Spotify chart. The “Renaissance” merch boxes sold out, even though fans didn’t know exactly what they would be getting when they ordered them. Of course, the memes reacting to the song have abounded as well. Amid The Great Resignation, the single is already resonating with young people who, well, want to quit their jobs with Mashable referring to the track as the #antiwork anthem—and it’s not hard to see why with lyrics like: “Damn they work me so damn hard / Work by nine then off past five / And they work my nerves / That’s why I cannot sleep at night.” Stories of young people being inspired to quit their jobs because of the song have been spreading, and commentary online is raving about how Beyonce has tapped into the zeitgeist and mindsets of burnt out young people. Or as @senari put it, “Beyoncé saw that it was the summer of late-millennial burnout, the labor movement, ‘90s revival, and queer pride and was like, ‘Yeah, I can make a song about that.'” The fact that the song is a dance track, sampling ’90s dance artist Robin S. and queer music icon Big Freedia is also setting fans off (in a good way) with one tweeting “Beyoncé gave us an anti-capitalist, pro-gay summer anthem with vocals, rapping, a choir call and response, and FREEDIA. We really won.” (Hot vaxx summer 2.0, anyone?)

The Internet Can’t Stop Talking About Nerf’s First-Ever Mascot
From Scrub Daddy to the Duolingo owl, YPulse told you about how brands are turning their mascots into internet celebrities. Now, the latest brand to jump on the trend is Hasbro’s Nerf, who debuted a new mascot to promote its popular foam dart-maker as part of its “Unleash the play in you” campaign. Murph (who uses they/them pronouns), is the toymaker’s first-ever mascot, is made up “of many, many Nerf darts” and rocks an orange basketball jersey with matching orange shoes. Adweek reports that Murph is “a playful and gifted athlete,” while Hasbro’s global VP says that Murph represents the “ageless, unbridled fun that lives in all of us and creates a physical embodiment of that feeling you get when you play with Nerf.” However, Murph’s appearance quickly became the topic of discussion on social media shortly after their debut, with many users describing them as “nightmarish,” “terrifying,” and downright “creepy.” Some are even comparing Murph to Gritty, the Philadelphia Flyers’ mascot who quickly became a beloved icon on Twitter as well as making comparisons to the Tooth Child from the Candle Cove creepypasta story. Despite some of the initial reactions describing Murphy as unsettling and scary, creating a branded mascot is clearly still a way to generate attention about young users on social media. Hasbro’s Nerf brand also certainly has the hang of viral marketing: Prior to debuting Murphy, Nerf also leaned into the branded getaways, which we told you was one of last year’s hottest marketing trends. 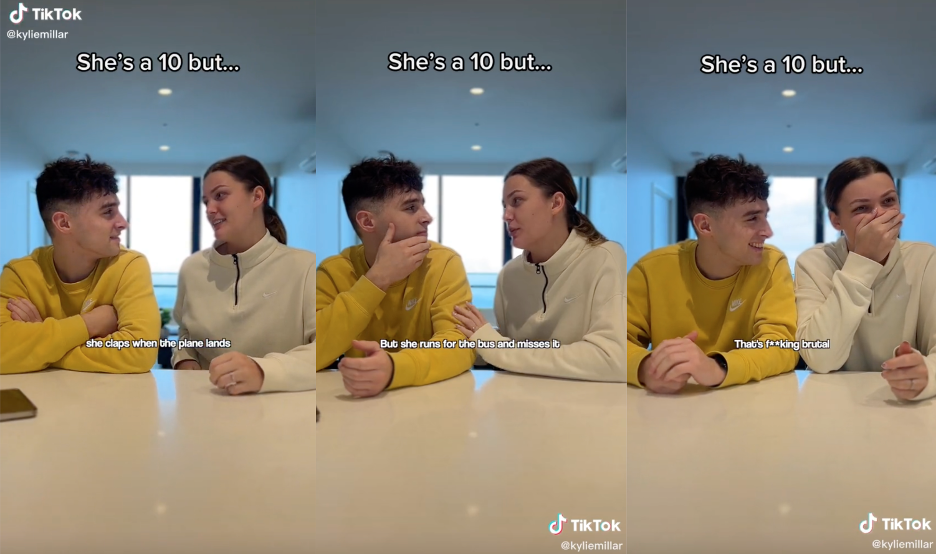 The “She’s/He’s a 10” Meme is Taking Over Twitter & TikTok
Memes on Twitter and TikTok aren’t a new thing—and the latest one to take over is the “She’s/He’s a 10” one that has a user “rate an imaginary lover on a scale from 1 to 10 based on their attractiveness before presenting a negative or positive trait that might affect their score.” For instance, @graveyardwitch tweeted “she’s a 10 but watches twilight every time it rains,” while @SavLovesWift tweeted “she’s a 10 but she audibly gasps whenever she hears a Taylor Swift song while out in public.” On TikTok, the hashtags #shesa10 has over 15 million views, while #hesa10 has over 21 million views. In many of the videos, TikTokers participate in the “She’s/He’s a 10” challenge by saying their interaction of the meme into the camera, or going back and forth and saying different iterations with their friends. Even brands started getting in on the trend. For instance, Netflix tweeted “he’s a 10 but he has some serious papa issues” referencing Jamie Campbell Bower’s Number 001 character from Stranger Things, while HBO tweeted “she’s a 10, but she’s secretly dating her brother” (a reference to Game of Thrones). The meme is clearly just a fun way for young consumers and brands alike to hop on the latest internet inside joke. 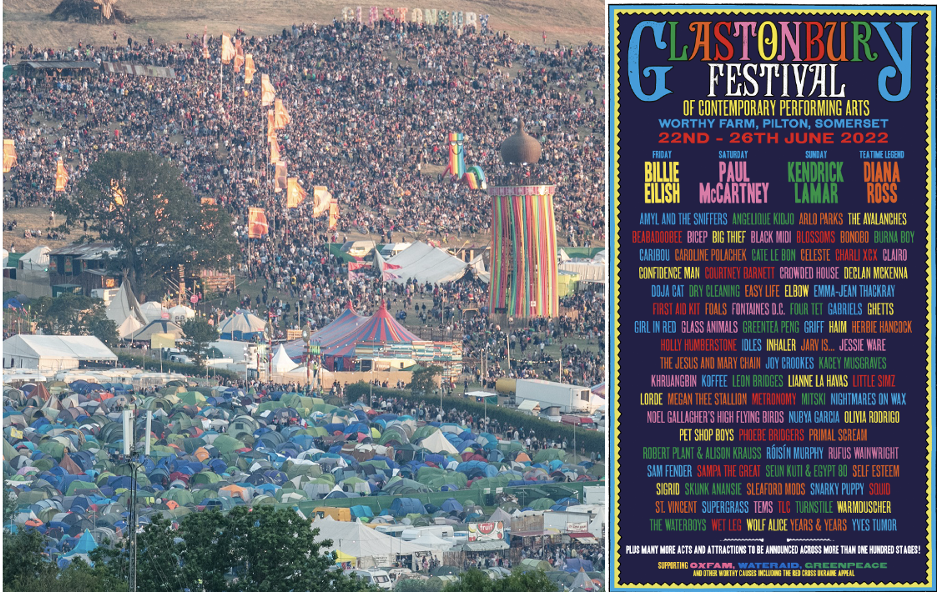 Britain’s Most Famous Festival Is Back After Three Years

Glastonbury has come back to the U.K. after a three year break due to the pandemic, celebrating 50 years of music with popular acts like Paul McCartney, Billie Eilish, and Diana Ross. The once small-time festival home to hippies and a failed The Kinks headline back in the ’70s is now a once in the life-time opportunity for many artists and young consumers. And with music being the No. 1 pastime for Gen Z and Millennials as they continue to tell us that music is an important part of their lives, it’s not surprising that they’re rushing to grab a five day stay in the fields of Somerset. This year’s fest has already taken social media by storm with Glastonbury 2022 a trending hastag on TikTok as small creators show their day in a life including their camping experience, the food available, the small businesses that have taken up camp and the stunning views. Of course, young consumers who weren’t able to snag a pricey ticket can follow the event on Instagram through @glastofest themselves. And with Billie Eilish making Glastonbury history as the youngest headliner ever, it’s set to be an exciting return to the festival as people who weren’t fast enough to grab a ticket wait keenly for the 2023 line-up.

Khaby Lame has officially dethroned Charlie D’Amelio as the most-followed creator on TikTok.

#CountryMusic is trending on TikTok (with a whopping 8.9 billion views) as TikTokers showcase and cover some of their favorite country hits.

A new song on TikTok is sparking “relationship drama” between young lovers.

Sleuths on Reddit are calling out Hulu’s The Kardashians for supposedly “faking a scene” in the season finale.

More behind-the-scenes photos of Margot Robbie and Ryan Gosling as Barbie and Ken have been released.

Euphoria star Hunter Schafter is the latest to be cast in the prequel film Hunger Games: The Ballad of Songbirds and Snakes.

North America
Young People Are Seriously Done With Facebook on The Viral List
TL;DR Facebook is in hot water with already waning young users for supplyi...
North America
Taylor Swift is The Newest Celebrity Private Jet Controversy on The Viral List
TL;DR Taylor Swift has been called out for having the highest emissions of...
North America
4 TikTok Influencers You Haven’t Heard of Yet, That Millions of Gen Z and Millennials Have
“I never expected this to blow up” is the new “thanks for one million subscribers” ...