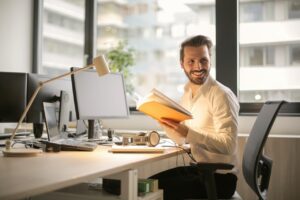 We’ve been telling you for a while now that the pandemic has caused young consumers to re-evaluate what’s important to them, and make changes accordingly. Among many other things, this shift in mentality has fundamentally altered young consumers’ relationship to work. In the face of burnout, a dip in mental health, and an overall desire to not waste any more of their precious time, many young consumers have made the decision to leave their jobs to seek better opportunites, which is fueling the Great Resignation. YPulse explored this topic in our What’s Next for Work trend report, which was published late last year. But our recently published WE Employment and Career Goals report shows that this trend is far from over: 39% of young Europeans plan to get a new job in the next year as they seek better opportunities.

But what are they looking for in their careers now? Two charts tell the story:

After two years of setbacks and uncertainty, Gen Z and Millennials in Western Europe decided one thing was clear: they no longer wanted to do work that wasn’t meaningful to them personally. In fact, a report from Escape the City found that 89% of today’s young U.K. employees “want a career with a strong sense of purpose” compared to 71% in the pre-COVID world. As the COO of Escape the City told BBC: “It’s been a period of reflection for people to think about their lives and work, and what matters to them. People are flocking to purposeful careers.” Meanwhile, a recent study from accounting giant PwC found that almost one in five U.K. workers are likely to change jobs in the next 12 months, with one of the top reasons being wanting a more fulfilling job (68%).

Indeed, YPulse’s WE Life Milestones and Future Plans report found that four in five young Europeans say having a meaningful career is an important goal to them personally—and a third say this became more important because of the pandemic. Now, the majority of young Europeans say they’d rather have a career full of passion than one full of cash—and this is even more true of Gen Z. In fact, 86% of Gen Z tell YPulse having a meaningful career is an important goal to them personally compared to 76% of Millennials, which has led many companies to create “Gen Z dream jobs.” Meanwhile, one survey found that 24% of 13-24-year-olds wouldn’t work for a company with unsustainable business practices, and another shows that one in ten could quit their job for the siren song of TikTok.

But beyond becoming a TikTok star or JanSport’s “Chief Mood Officer,” what are they actually looking for in their careers? 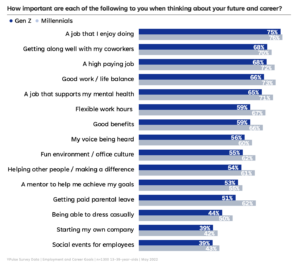 A high salary is important, but so is avoiding burnout

Again, at the top of the list for both Gen Z and Millennials is a job that they enjoy doing, underscoring just how important a meaningful career is to them. Having a high-paying job is also high on their list of career priorities, but for Millennials, having good work/life balance is more important. And for both gens, a job that supports their mental health is nearly as important as salary, which is proof that burnout among young employees is very real and shouldn’t be ignored. In fact, burnout is fueling The Great Resignation, and the majority of young employees tell YPulse they’ve experience it themselves. Now, as they re-evaluate their careers, they’re putting the onus on employers to support their mental health.

While in part this could mean companies offering resources such as therapy and perks, for many young Europeans, it also means having good work/life balance, including reasonable hours, flexible work policies, and even having the right to ignore their boss after bussiness hours. In fact, a third of U.K. workers say they would take a pay cut to never return to the office, and many companies and even countries are trilaing the four-day workweek in an effort to create a more balanced work environment—and, of course, appeal to burnt out young employees. In other words, these gens wouldn’t be too happy about Elon Musk’s recent back-to-the-office demands.

Old-school office perks such as monthly happy hours and informal dress policies are not top-of-mind for these generations of workers: less than half of 13-39-year-olds saying being able to dress casually and social events for employees are important to them when thinking about their careers. Instead, they want things that actually make their jobs enjoyable, such as having their voices heard and getting along well with their coworkers.

While starting their own company also falls far down on the list, having two in five young Europeans say that’s important to them is actually pretty significant. While we recently told you that young Europeans aren’t quite as entrepreneurial as their North American counterparts, it’s clear that for many, starting their own company is still important—and is even more important as they seek more meaningful work in a post-COVID world.