Gen Z and Millennials aren’t shopping at big box stores because they have to, they actually want to. These three stats from YPulse’s recent Mass Merch Mentality trend report explore their retail attitudes…

Walmart, Target, and Amazon consistently ranked highly on YPulse’s youth brand tracker. These are the three top retailers among both generations, and Amazon was in the top 10 ranking of brands for both gens at the end of 2021. This might come as a surprise to older generations who think of big box shopping as “uncool” or think  young consumers’ purchases are completely focused on supporting causes. But there are many things contributing to Gen Z and Millennials’ retail choices, and of course price is a huge decision maker for them. They have grown up in the shadow of the Great Recession, which has caused them to be more budget-conscious at a young age—and making shopping at mass merchandise / big box retailers part of their norm. But it isn’t just affordability that’s driving their mass merch habits. The truth is: Gen Z and Millennials actually like shopping at big box retailers.

YPulse’s Mass Merch Mentality trend report dives into how growing up with mass merch has reshaped young people’s shopping preferences, how these preferences are changing the rules of retail, and how they view these brands. Our trend research found that 61% of 13-39-year-olds shop at mass merchandise retailer / big box stores, making these by far the top places that these gens are buying products. These three stats from our research show how strong their affinity for big box/mass merch stores really is: 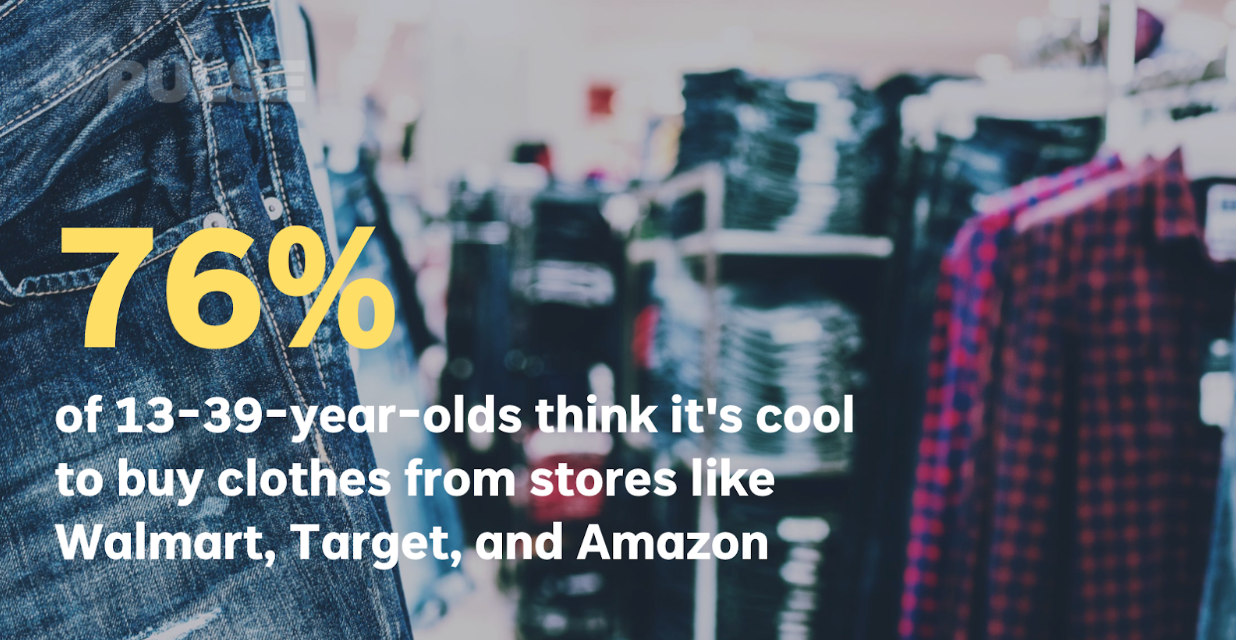 The majority of young shoppers think it’s cool to buy clothes from Walmart, Target, and Amazon.
Seventy-six percent of 13-39-year-olds think it’s cool to buy clothes from stores like Walmart, Target, and Amazon—and in fact, Walmart and Amazon are at the top of their ranking of favorite places to buy clothing. Sure, affordability is a huge part of why young shoppers gravitate toward those retailers, but the reality is, they also think the brands are simply cool. When asked what kinds of product they usually buy, “good value” is the top response, but “cool” is the second, and the majority (58%) say that mass merch/big box retailers sell products they want to buy. And what’s trending on social media is an indicator of that: we told you that hashtags like #WalmartHauls and #FoundItOnAmazon have trended on social apps like TikTok as young consumers proudly show off their mass merch finds. While older generations might think of big box stores as a place they have to shop because of budgets, these younger shoppers have embraced budget shopping and don’t see it as something to be ashamed of, but to celebrate. 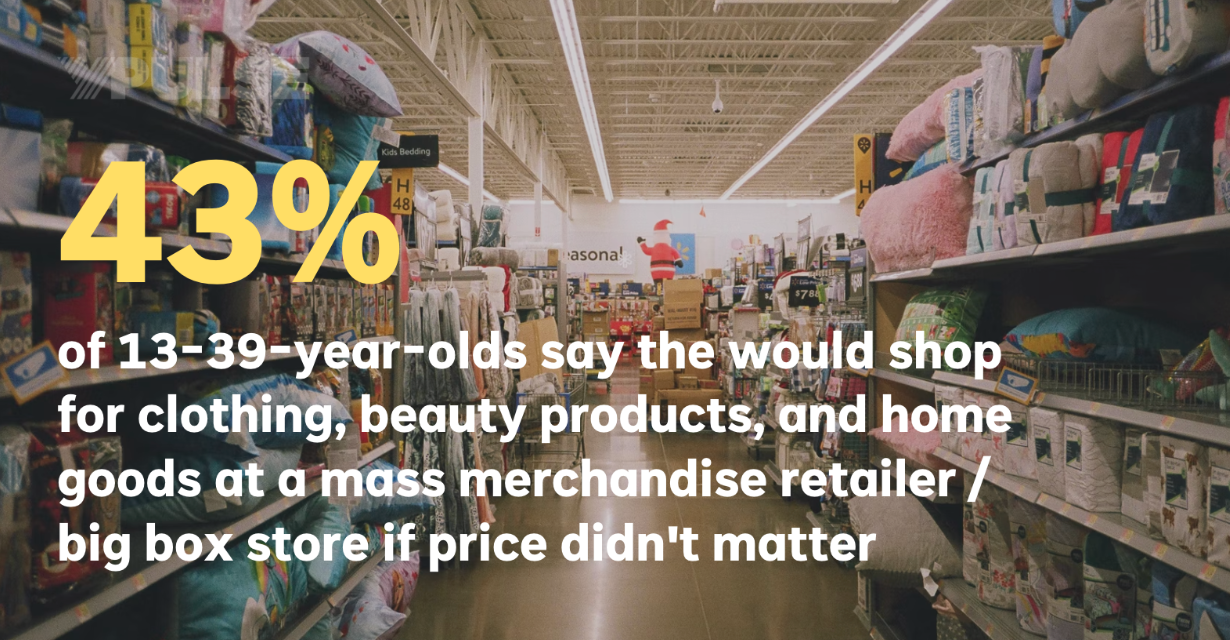 Over two in five young consumers would shop at a mass merchandise retailer / big box store even if price didn’t matter.
Need more evidence that affordability isn’t the only reason they’re shopping at mass merch/big boxes? Over two in five say they would shop for clothing, beauty products, and home goods (pretty much everything they need) from these types of stores even if price wasn’t a factor. We just told you that the majority of them think shopping for clothes at these places are indeed cool, but the truth is, accessibility and the huge variety of products available at these stores are likely factors in this as well. In our open responses, young respondents continuously tell us that they enjoy shopping at Amazon because of the amount of offerings they have on their site, but they also appreciate how quick and convenient it is to shop there. Meanwhile, retail locations of Walmart and Target are conveniently located in many parts of the U.S., making it easy for young shoppers to go there anytime they need any essentials. These retailers have become deeply ingrained in their shopping behaviors, and have reshaped their shopping preferences, setting the bar for convenience and product variety so high that they’ve become 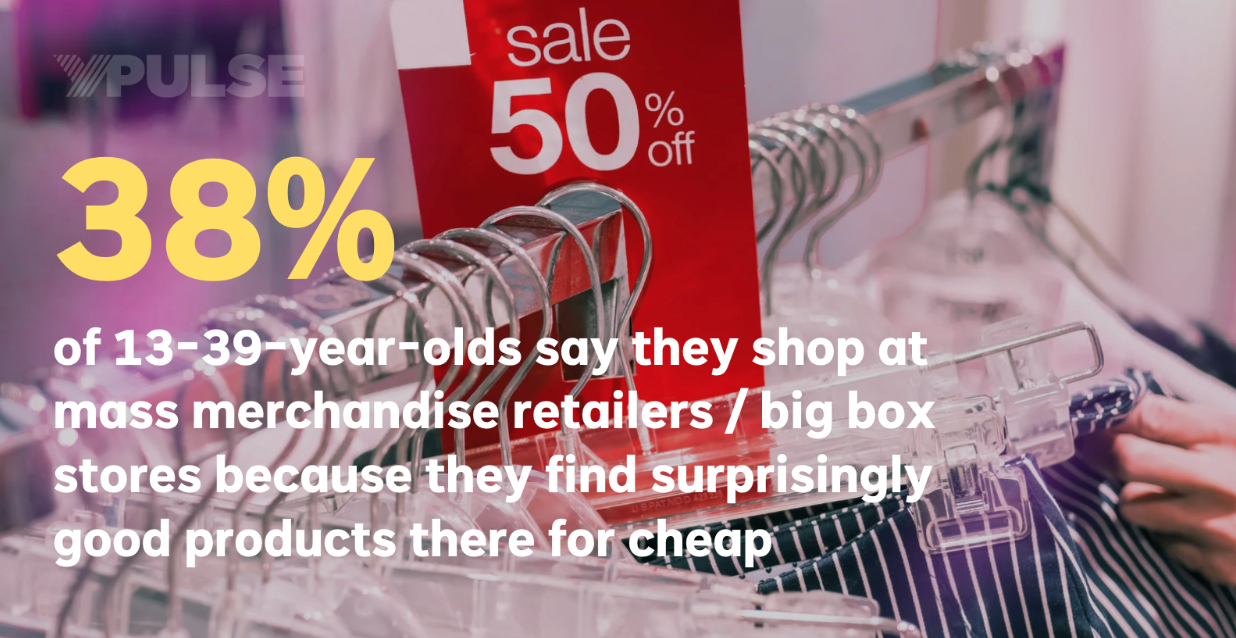 Nearly two in five young consumers shop at mass merchandise retailers / big box stores because of affordable products that are actually good.
Years of shopping big box stores have given young consumers a treasure hunter mentality when it comes to retail. Thirty-eight percent of 13-39-year-olds tell us they shop at mass merch retailers / big box stores because they find surprisingly good products there for cheap. Those previously mentioned hashtags are again evidence of this–young consumers are excited to show off the buried treasures they’ve found at these stores/sites.. Meanwhile, 25% of 13-39-year-olds say they can find cheap versions of trendy, designer items at mass merch retailers / big box stores—and we told you that dupes of luxury products are popular among young shoppers. Thirty-four percent of Gen Z and Millennials say they get a rush when they find something they really like for cheap—and females are much more likely than males to say they do so.