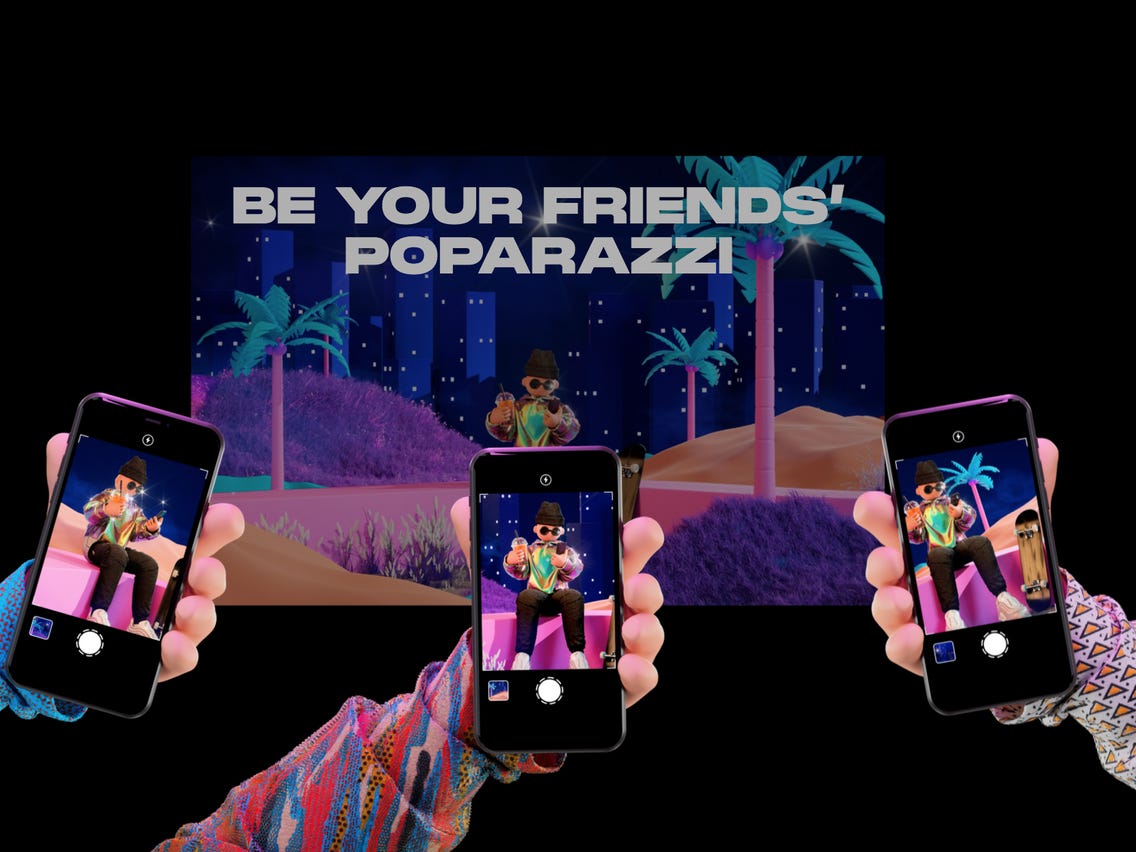 Gen Z and Millennials continue to spend a massive amount of time on social media, with each generation reporting they spend an average of over four hours a day on social platforms, and the majority agreeing that they are addicted to social media, according to YPulse’s recent mobile/app behavior research. While the majority think that social media has more of a positive impact on the world than negative, young people do get burnt out on their feeds, with 55% saying they’ve been feeling social media fatigue. And the pressure to appear perfect on social platforms has an impact on their mental health. That’s likely why some of the most buzzed about new social apps are about taking a different approach to social content, and breaking some of the “bad” habits of current models by encouraging more spontaneity and honesty.

While powerhouse social apps like TikTok, Instagram, and Snapchat continue to dominate the social apps that young people go to, there are always new social apps trying to win them over, and we’re always keeping tabs on new ones to watch. Lately, some of the ones earning the most buzz are “alternative” social platforms targeting a younger crowd who prefer anonymity and authenticity. While our social media data indicates that user-bases for these platforms are still in the (very) early stages, they’re growing and show that a different approach to social is appealing to many young people. Here are four of them:

SideChat
While anonymous apps had a major moment years ago, ultimately popular platforms like Yik Yak were banned on many college campuses for their progression of hate speech and harassment. But the allure of chatting and gossiping without revealing identities is still alive, and Sidechat is the latest anonymous app to “rack up downloads” at schools like Harvard, Columbia, and Cornell. The app’s marketing has reportedly been targeting specific campuses with student ambassadors, and Sidechat Instagram accounts that are specific to each college. Posts range from memes to gossip, with one student comparing it to Lady Whistedown’s column in Bridgerton, but of course, anonymity breeds toxicity as well and some report that they have deleted the app due to “hateful posts”—but ultimately the desire to stay in the loop on campus happenings weighs out the negatives for many. 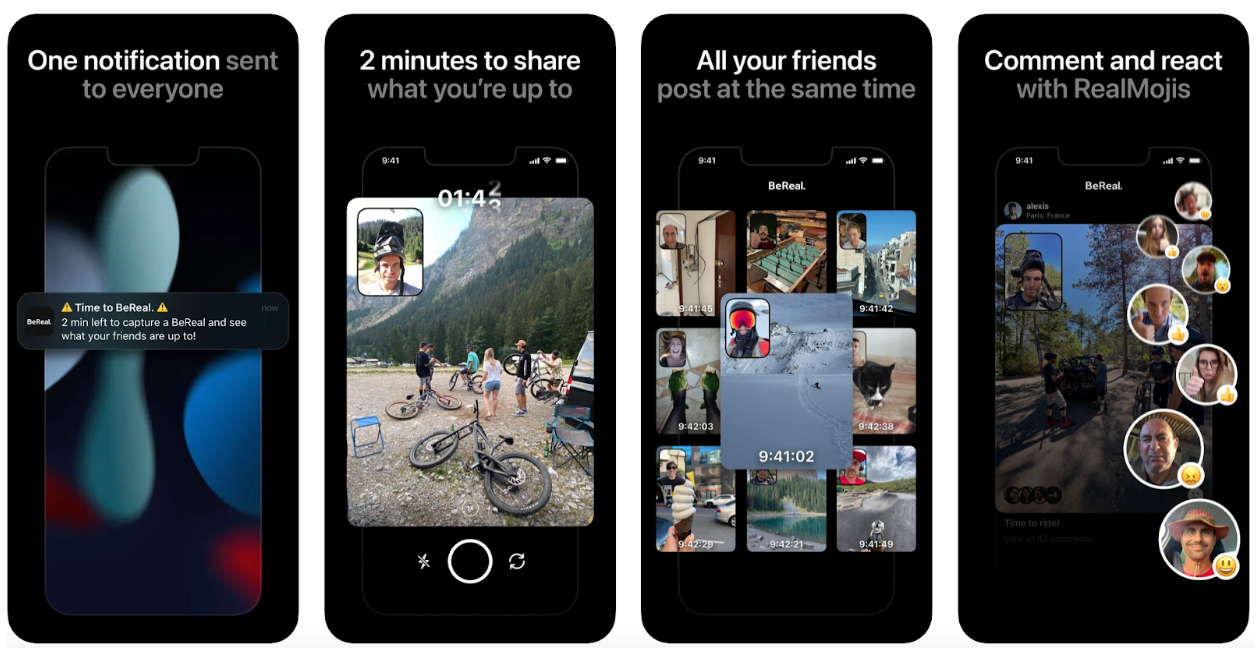 BeReal
Described as a mix between Snapchat, Twitter, and Instagram (basically all of the social platforms), BeReal is taking the pressure out of posting with a photo-sharing model that “forces” users to document what they’re doing at a random time of day—regardless of how boring or exciting that moment is. Users get a “Time to BeReal” notification from the app at a random time of day, prompting them to take one picture of themself and one picture of their surroundings. The point is “You’re not glamorizing anything like you do on Instagram or Facebook,” as one 19-year-old student from Northeastern University told Protocol when asked about why they use BeReal. And the catch is, users aren’t allowed to “lurk” on their friends posts of the day until they hit publish on their own. Plus, there’s no likes; users can only interact with their friends’ posts with RealMojis, which are selfies imitating emojis. BeReal first launched in France, becoming one of the top 10 social media apps in the country last March, and it’s taking over U.S. college campuses for its authentic approach to connecting with friends through photos. Meanwhile, some brands have started trying to jump on the app. Chipotle joined the app in the spring to tap into its growing community, sharing a limited-offer reusable promo code on its BeReal posts. For four days, the first 100 customers could use a code online or on the restaurant’s app to score a free entrée. While BeReal doesn’t offer advertising to brands, which aligns with their commitment to “barring filters, edits, and influencer culture,” Chipotle’s campaign is “one of the first brand marketing activations” on the up-and-coming social platform. However, marketing experts warn brands that while they can be involved on the app, they should “think introspectively” about what they’re trying to get out of it, and be careful since “Gen Z and other audiences can smell an ad from a mile away.” 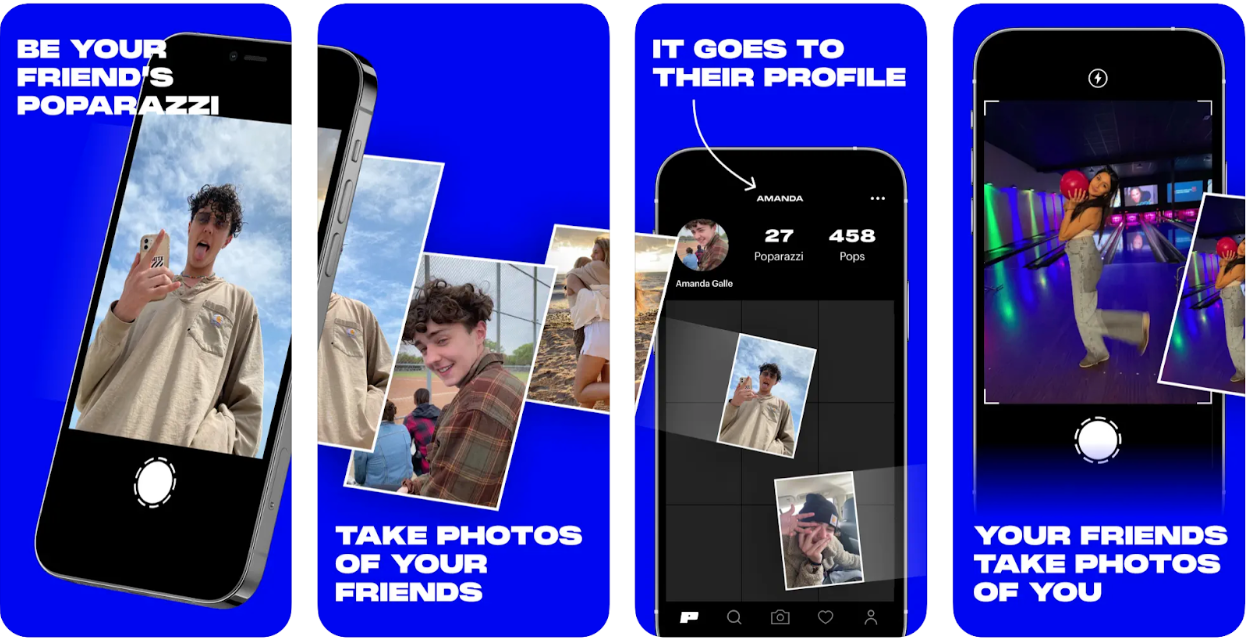 Poparazzi
BeReal isn’t the only social app trying to push authenticity to Gen Zers. Launched last year, Poparazzi is a social app positioning itself as an “anti-Instagram social app.” The way it works is the app only allows users to take photos of other people, no selfies allowed. It doesn’t allow filters, follower counts, captions, or photos taken by a phone’s front-facing camera. According to TechCrunch, the app hit the top of the App Store by hyping itself to success. Its founders “smartly leveraged” the TikTok hype cype to drive App Store pre-orders to guarantee that it would hit the top of the charts as soon as it became available. They also “implemented a clever onboarding screen that used haptics to buzz and vibrate your phone as its intro video played—something that helped generate word-of-mouth growth as users took to Twitter to post about the unique experience.” Over the last year, they rolled out new features including the ability to block and report users, upload from the camera roll, support for video, messaging, comments, and captions, and in-app challenges to encourage participation like “pop a friend eating ice cream,” “pop a friend at a mall,” or “pop a road trip.” According to the company, it saw 5 million installs during its first year, primarily among Gen Z users. The startup reports that 75% of its users are between the ages of 14-18-year-olds, while 95% of users are 14-21-year-olds. Most of its users are based in the U.S., and have shared over 100 million photos and videos on the app. While Poparazzi was an “overnight viral sensation,” its founder Alex Ma says it took three years to develop. He and his brother Austen Ma (who is one of the co-founder) had to go through “several pivots” to get to Poparazzi, but ultimately, they wanted to turn one of Instagram’s core features, which is photo tagging, into a “stand-alone experience” and make it the full focus. Alex told dot.LA: “In the world with Instagram and TikTok, I think people are craving a place on the internet where they can just be themselves and not feel like they’re competing for likes or comments.” 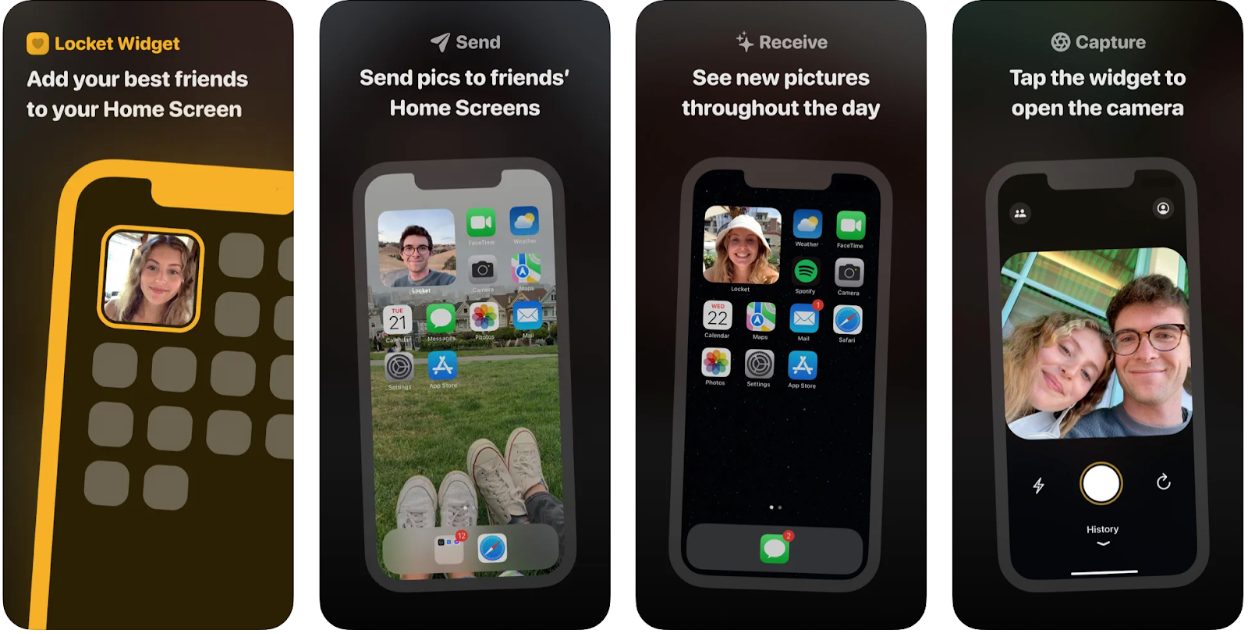 Locket
Launched at the beginning of the year, Locket is a widget that lets users put live pictures from their friends on their phones’ home screens. When a friend sends a photo, it will appear on a Locket users’ widget on their home screen. In order to send a response, all users have to do is tap the widget, take a photo, and send it back to their friends’ home screens. Think of it as “a little glimpse” of what your friends are up to throughout the day that adds up into a history of pictures they’ve sent. Founded by Matt Moss, a former Apple Worldwide Developer Conference student scholarship winner and recent UC Santa Barbara grad, he said it initially started as a “personal side project” that he used to share photos with his girlfriend, but eventually expanded it as something bigger when his friends showed more of an interest in it. Since launching on New Year’s Day, the app has accumulated millions of users and in its first week, it became the No. 1 app in the U.S. App Store, according to Apptopia. Moss credits Locket’s rapid success to “going viral on TikTok,” where he shared videos on the platform and received thousands of views in the span of a few days.

Don’t have a YPulse Paid account? Find out more here.

Western Europe
4 Brands Tapping TikTok to Reach Young Europeans
Having a TikTok marketing strategy is a must for brands trying to reach young Europ...
North America
You Got #Krissed is One of the Top Trending Hashtags This Month
According to Gen Z, trends start on TikTok first before spreading to other platform...
North America
Just How Big Has TikTok Use Gotten Among Gen Z?
No other platform has won Gen Z over as completely as TikTok–and these are the late...