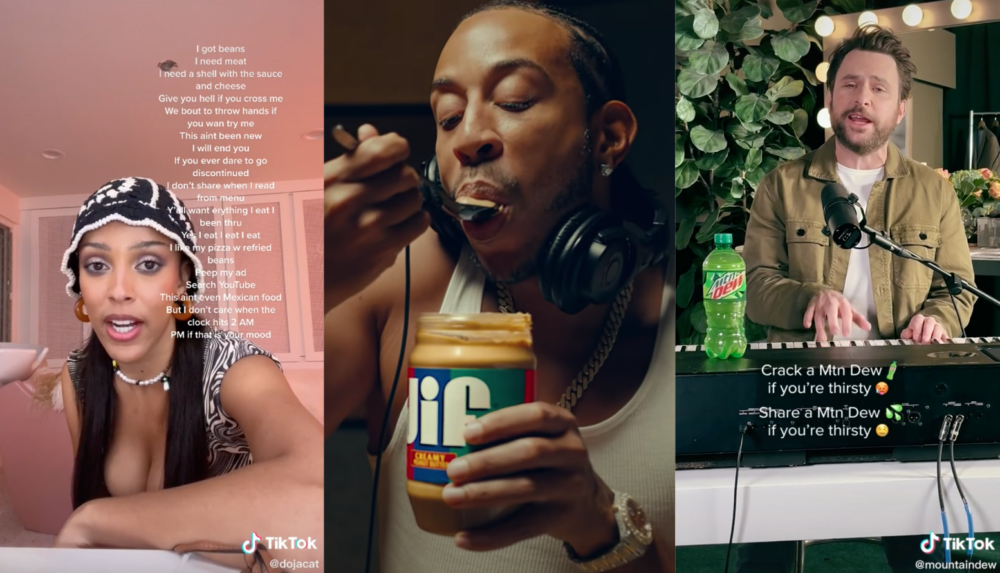 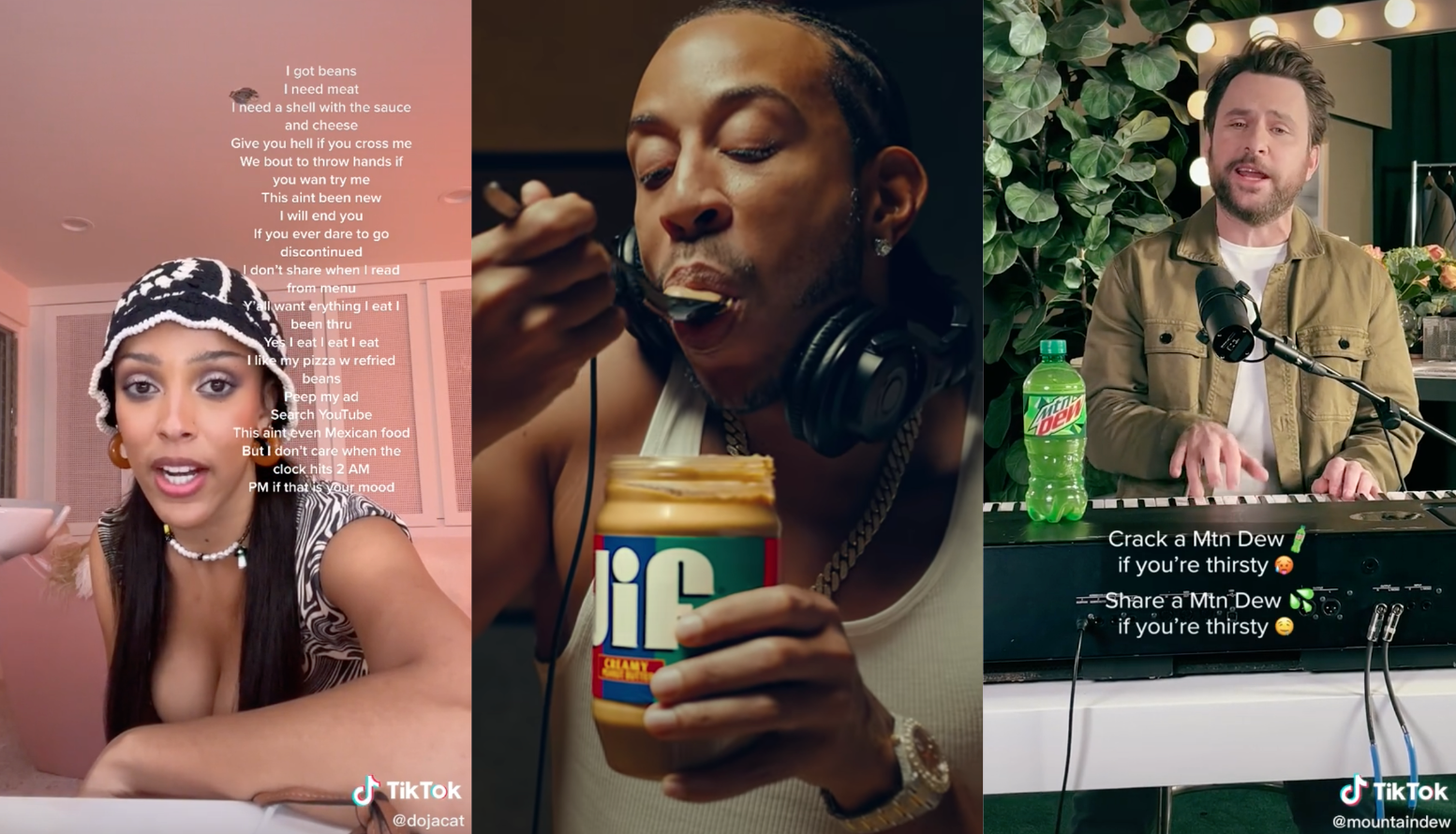 In the last year, food and bev brands have been tapping musicians (and actors) to write and perform branded jingles…

YPulse’s Pop Culture Redefined trend research found that music moments like album and song drops are some of the cultural events that Gen Z pays the most attention too–and music in general is a major driver for the generation. Our research also shows that Gen Z is more likely to say that they would want to see musicians as spokespeople for brands than TV/movie actors, online influencers, or athletes. For brands, this means that creating music and music content and collaborating with popular musicians is a must. We’ve seen this in action in the last few years as fast food brands have reinvented the celebrity collab with musician “menus” and merch.

But as food and beverage brands continue to come up with ways to reach and stay relevant with Gen Z and Millennials, they’re also collabing with musicians to reinvent the concept of the brand jingle. We told you that brands creating original songs going viral on TikTok is a trend to keep an eye on—but now more are taking it to the next level by working directly with popular musicians and celebrities to write and perform the songs in order to promote their menu items and products. Here are four food and bev brands who have teamed up with celebs in the last year to create music moments with updated jingles:

Doja Cat x Taco Bell
In March, Doja Cat went viral on TikTok for a video that has racked up over 38 million views, of a self-written verse about Taco Bell’s Mexican Pizza (which at the time was discontinued). Doja Cat starts off the video by saying “I made a song about Mexican Pizza because I love it so much. I wish Taco Bell didn’t discontinue it a year ago and this led me to do this monstrosity of a beat.” The lyrics heavily reference the ingredients on the menu item (i.e, “I got the beans, I need the meat, I need a shell with sauce and cheese” and “I like my pizza w refried beans.” and is heavily inspired by SpongeBob Squareparents’ “Krusty Krab Pizza” song. The rapper later revealed in a separate video that she was hired by the taco chain to create a jingle about Mexican Pizza. The partnership was clearly part of a bigger collaboration because YPulse told you about how Doja Cat officially announced during this year’s Coachella that the Mexican Pizza was returning to the Taco Bell menu. She also shared a video on her TikTok account eating an actual Mexican Pizza saying, “This is the best thing I have ever had,” which brought in over 10 million views. It was also revealed shortly after that the chain was working with Doja Cat, country queen Dolly Parton, and TikToker Victor Kunda on “Taco Bell: Mexican Pizza” (which was originally supposed to premiere on TikTok on May 26th, but is being postponed to a later date), with music written by Hannah Friedman and will feature original music from “The Unofficial Bridgerton Musical” creators Abigail Barlow and Emily Bear and joining the TikTok musical trend. Clearly, all of the hype Doja Cat has built around Mexican Pizza is working because Taco Bell recently announced that due to a combination of high demand and supply chain issues, it’s already running out of the in-demand item.

Arby’s x Pusha T
In March, Arby’s took competitive marketing to the next level by enlisting rapper Pusha T to write and rap a diss track taking shots at McDonald’s’ Filet-O-Fish sandwich to generate buzz for its Spicy Fish Sandwich. Pusha T raps phrases like, “A little cube of fish from a clown is basic,” and “How dare you sell a square fish asking us to trust it / A half slice of cheese, Mickey D’s on a budget?” The “Spicy Fish Diss Track” taps into pop culture by nodding to the rapper’s beef with McDonald’s for reportedly writing the “I’m Lovin’ It” jingle that he claims to have not received proper credit for. In the actual ad, Pusha T is heard rapping, with lyrics on various images of Arby’s menu items. Arby’s CMO Patrick Schwing told Marketing Dive: “We’re trying to sell a product and make sure that we draw that distinction, but we’re also doing it in a fun way with an unexpected twist. At no point do we think it went a direction where it was anything but having fun about a fish sandwich.”

Jif x Ludacris
Last summer, Jif worked with Publicis New York on its “Lil Jif Project” campaign and collaborated with rapper Ludacris on the song “Butter.ATL,” which is full of references to Jif, though it “doesn’t immediately draw a connection to the brand’s marketing.” In a short film for the campaign, Ludacris is seen rapping verses from the track with a mouthful of the brand’s peanut butter. According to the company, the point of the campaign was to highlight the different types of rap / hip-hop styles of various rappers and hip-hop artists. For instance, Ludacris is known for his “fast flows,” which is heard in the brand’s spot. As part of the campaign, the brand launched a #JifRapChallenge (which has a whopping 7.4 billion views on TikTok) and enlisted a variety of TikTok influencers to raise awareness for it. For the challenge, users were encouraged to use the app’s duet feature to try and recite verses from the “Butter.ATL” song with peanut butter in their mouths. YPulse research found that hip-hop/rap is rapidly becoming Gen Z’s top music genre and Jif’s collaboration with Ludacris (along with Arby’s with Pusha T and Taco Bell with Doja Cat) shows that brands are also making it a marketing favorite. 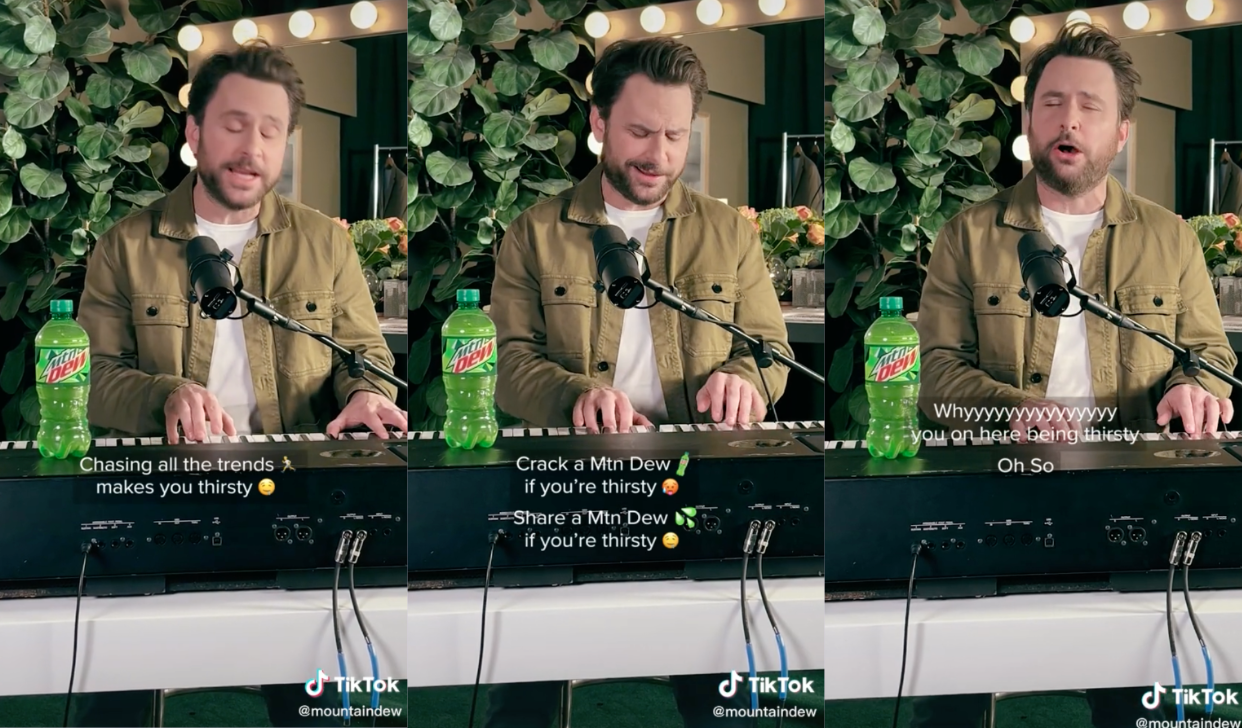 MTN DEW x Charlie Day
YPulse told you that MTN DEW has been doing a lot to reach young gamers. But overall, the beverage brand has been doing a lot to reach young consumers as a whole to grab their attention, whether it’s through branded getaways or launching a new podcast. Earlier this year, MTN DEW teamed up with actor and It’s Always Sunny in Philadelphia star Charlie Day on a series of 10 spots for its latest campaign that features Day in several “ad tropes and over-the-top product placements.” In one of them, Day is sitting in front of a mirror and playing the piano (something that his character in It’s Always Sunny in Philadelphia does frequently), while singing an original jingle about MTN DEW’s drinks, which includes the lyrics “Chasing all the trends makes you thirsty, life is a thirst trap you see, crack a Mtn Dew if you’re thirsty, Share a Mtn Dew is you’re thirsty, why you on here being thirsty?” Day shared the video on his Instagram, which received 5.7 million views, while MTN DEW shared the clip on its official TikTok account, which garnered 36.8 million views. According to The Drum, that specific video and song were made especially for TikTok, with some users using the platform’s duet feature to sing along with the actor. While Day might not necessarily be the first celeb brands think of when it comes to reaching Gen Z, his pure and funny demeanor is the kind of energy that young people enjoy seeing on TikTok.

Don’t have a YPulse Paid account? Find out more here.