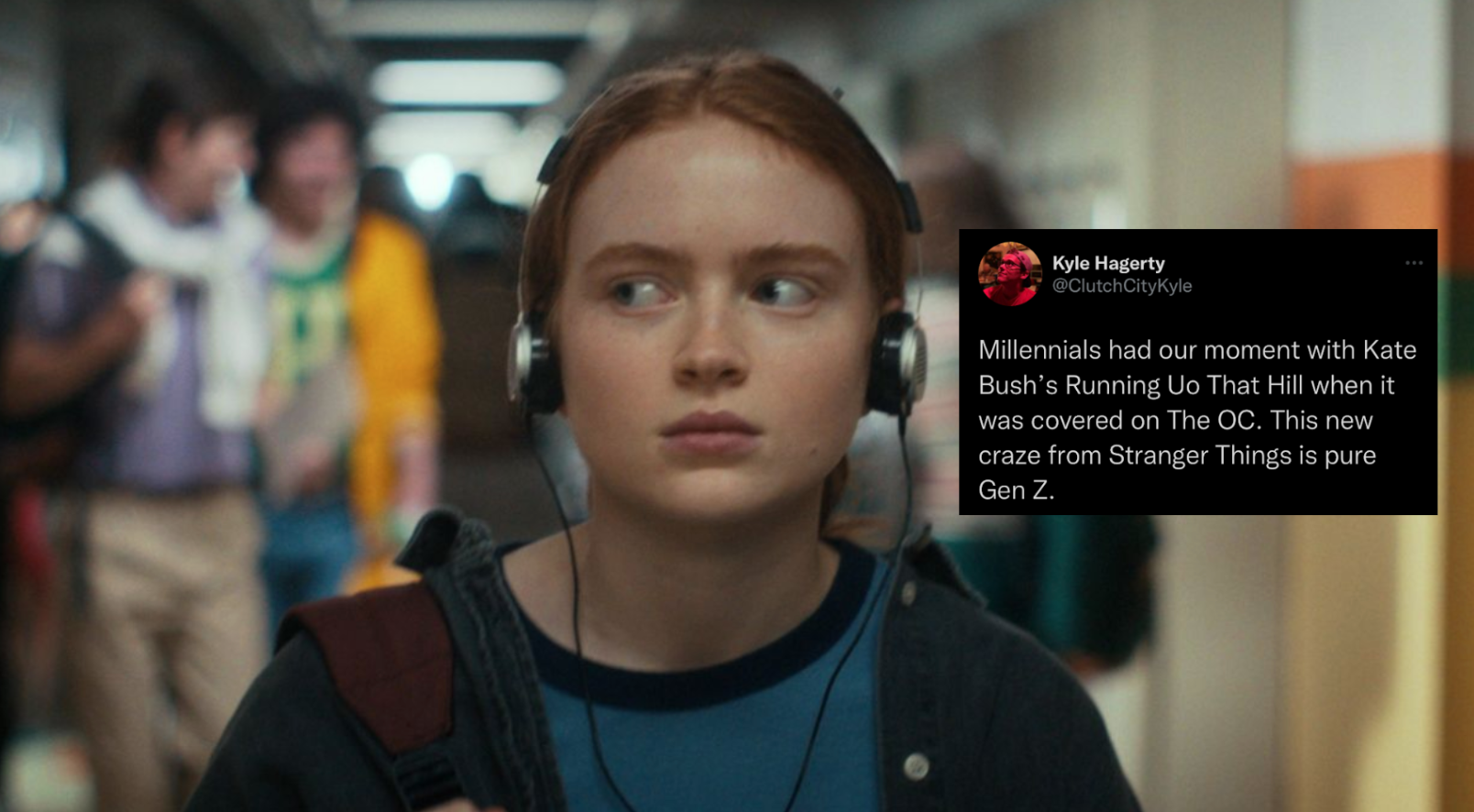 Thanks to Netflix’s Stranger Things, Kate Bush’s 1985 “Running Up That Hill” is at the Top of the Music Charts…After 37 Years
Over Memorial Day weekend, Netflix finally premiered its long-awaited fourth season of Stranger Things. While many fans were excited to see their favorite teens from Hawkins back on the small screen (Netflix reported that the fourth season smashed opening weekend records, and young viewers have told us it’s one of their favorite shows), someone else caught the attention (and ears) of audiences: ‘80s music artist Kate Bush. Bush’s 1985 track “Running Up That Hill” is featured prominently in the season, which is set in 1986. Shortly after the premiere, the song made its way to the top of the music charts for the first time ever, 37 years after its initial release. The track soared to the No. 1 spot on iTunes, and made it to Spotify’s Top 200, with over one million plays. And of course, users on TikTok and Twitter can’t stop talking about the song. While some older gens have tried to gatekeep the song from Gen Z, Gen X and Millennial who grew up with the song (some of whom heard the Placebo cover on The OC in the mid-2000s) got in on the trend, reminiscing about how they first discovered the song pre-Stranger Things, and welcoming the youngest gen to the Kate Bush fan club. Overall, the fourth season’s soundtrack, which features songs from The Talking Heads, KISS, and the Beach Boys, currently holds the fifth spot on iTunes’ Top 200 Albums. YPulse told you that classic rock comebacks are a music trend that brands should not be sleeping on, and with songs like Fleetwood Mac’s “Dreams,” Pink Floyd’s “Eclipse,” and Phil Collins’ “In The Air Tonight” jumping to the top of music charts after being used in movie trailers and viral videos, using older songs in newer media is certainly a way to attract young fans. 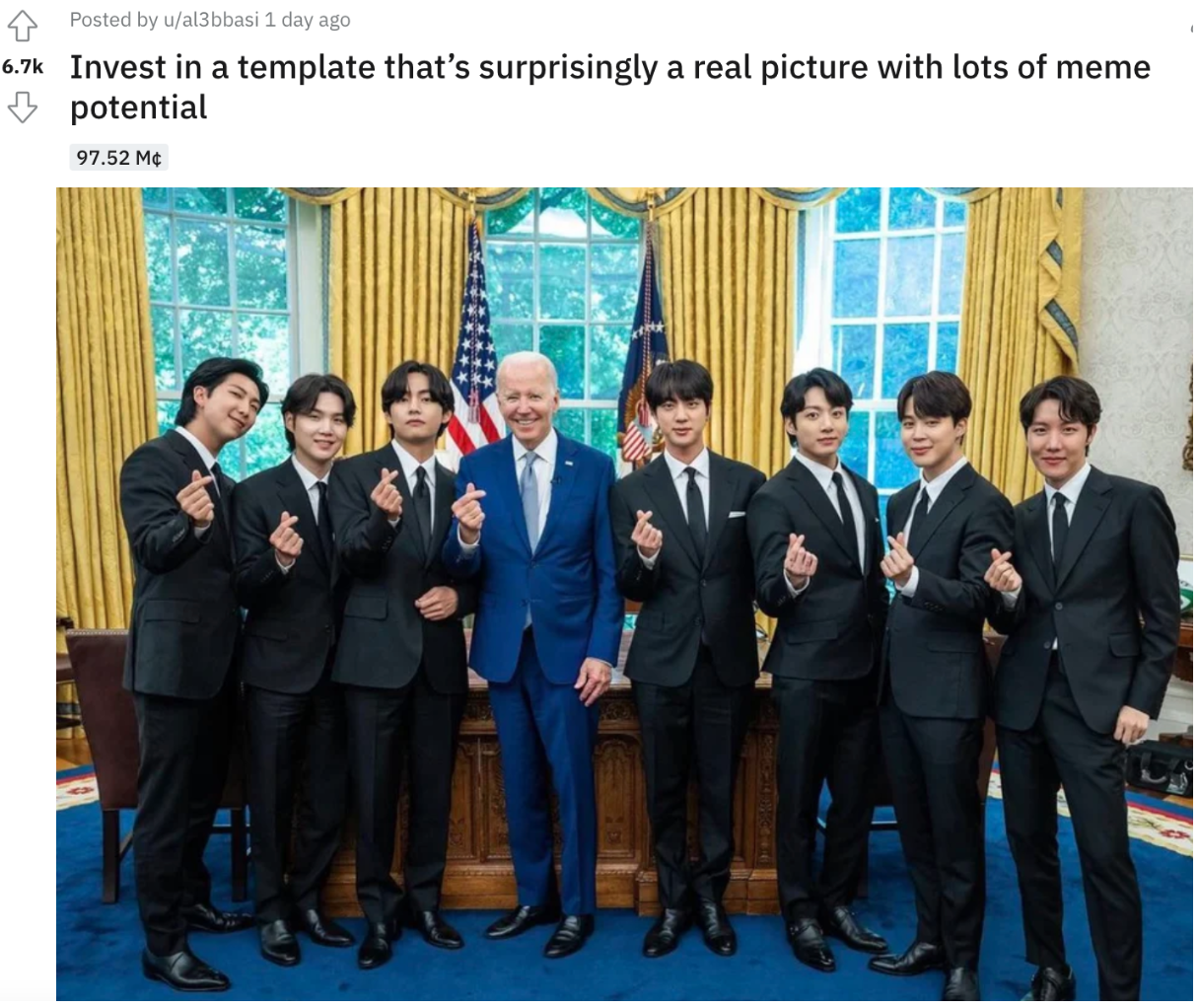 BTS Visited the White House to Raise Awareness for Anti-Asian Hate Crimes & Fans Are Showing Their Support Online
BTS is one of young people’s favorite bands—and on Tuesday (which marked the last day of AAPI Heritage Month), the K-pop group visited President Joe Biden at the White House to raise awareness on the rise in hate crimes against Asians and Asian Americans. During their appearance, band member Jimin said through a translator: “We were devastated by the recent surge of hate crimes, including Asian American hate crimes. To put a stop on this and support the cause, we’d like to take this opportunity to voice ourselves once again.” President Biden, the White House, and BTS all shared photos and videos on their official Twitter and Instagram accounts—including this behind-the-scenes video, which racked up over two million views on the @potus Instagram account. @ellie.cing commented: “thank you for amplifying asian voices BTS,” while @adelechim3 wrote: “im so so proud of them.” Shortly after the band’s visit, #BTSatTheWhiteHouse trended on Twitter as fans showed their support for BTS and the AAPI community, but of course, shared memes as well. BTS is no stranger to going viral nor are they a stranger to showing up for important social causes: In the fall, the United Nations invited them to talk about how to end poverty, climate change, and gender equality, which millions of young fans tuned into; and the band also previously raised $1 million in one day for its #MatchAMillion online campaign to support the Black Lives Matter movement. Their fandom (dubbed the BTS Army) have also become online activists: After Fox News correspondent Tucker Carlson insulted the band on his show, the Army was quick to denounce him on social media—and the BTS stans have also been credited with trolling Donald Trump’s rally during 2020’s presidential election. Inviting pop stars to talk about serious issues isn’t entirely new either: Previously, Olivia Rodrigo visited the White House to discuss the importance of getting vaccinated against COVID-19 with President Biden, so clearly young music artists partnering with the government seems like a way to raise awareness about serious issues among Gen Z. 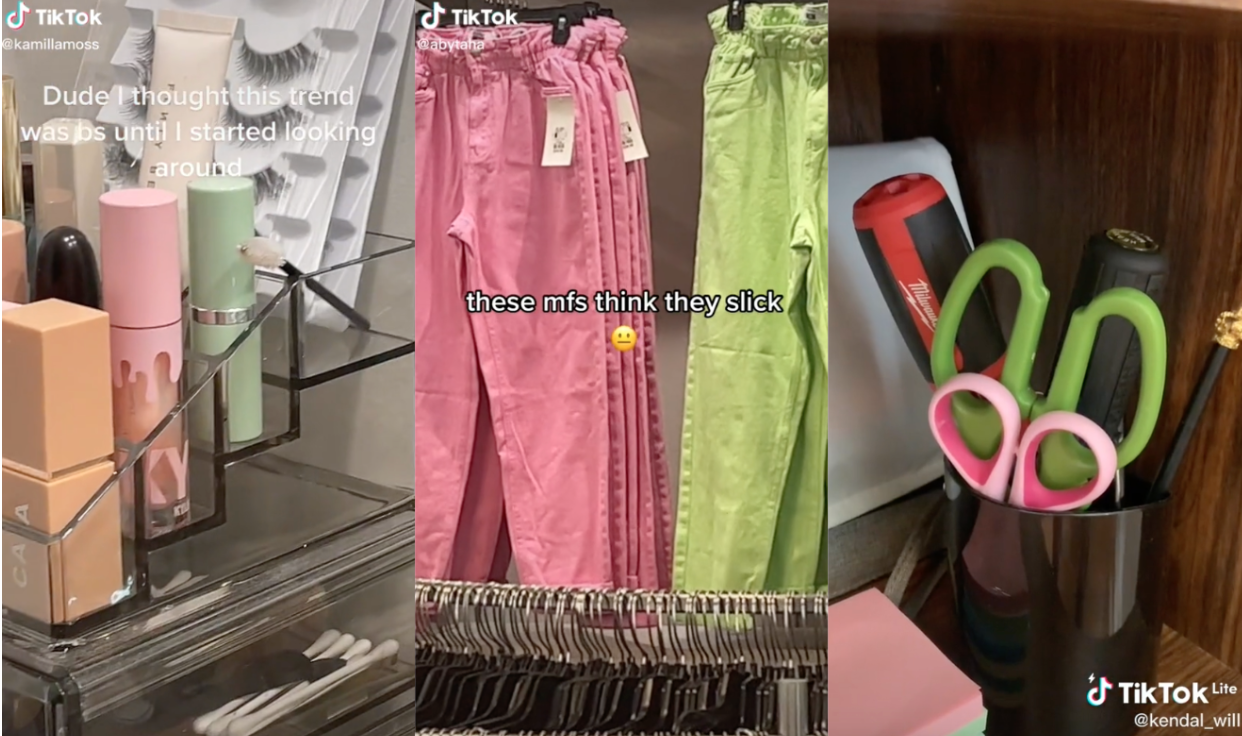 TikTokers are Doing the #FairlyOddparentsChallenge and Identifying Cosmo and Wanda (a.k.a Pink & Green Items) Around Them
From colorful makeup and “kiddie” jewelry, to velour tracksuits, we told you about all the ways Gen Z is bringing back the 2000s—and that includes popular movies and TV shows for that era. In recent weeks, TikTokers have been participating in a trend centered on Nickelodeon’s hit 2001 show The Fairly Oddparents, which is about Timmy Turner, his parents, his cruel and sadistic babysitter Vicky, and of course, Timmy’s fairy godparents: Cosmo and Wanda. The two characters have a distinct appearance (Cosmo has green hair and green clothes, while Wanda has pink hair and pink outfits)—and they mostly disguise themselves as basic, everyday objects that are green and pink when Timmy is around other people. The #fairlyoddparentschallenge involves users identifying pink and green objects around them and “pretending” that Cosmo and Wanda are hiding amongst them, while using the show’s catchy theme song as the audio. In one video, @kamillamoss includes the caption “Dude I thought this trend was bs until I started looking around” and shares various green and objects around her home that are next to each other, including lipstick tubes, water bottles, workout accessories, sweaters in her closet—and in a separate video, @abytaha used the caption “these mfs think they slick” to share pink and green objects next to each other that she saw while shopping at the store, including jeans and boxes. The hashtag #wandaandcosmo has 3.3 million views, while #fairlyoddparentschallenge has 320.4K views—and many of the videos featured on the hashtag include different variations of TikTokers sharing everyday objects around them that are pink and green, like Post-it notes, scissors, and even plants. The #FairlyoddParentsChallenge is certainly another fun trend on TikTok to add to the list of fun trends that young users are participating in, but with a nostalgic twist—and with the upcoming release of The Fairly Oddparents live-action reboot at Paramount+, the streamer might want to jump on this organic trend for some viral marketing. 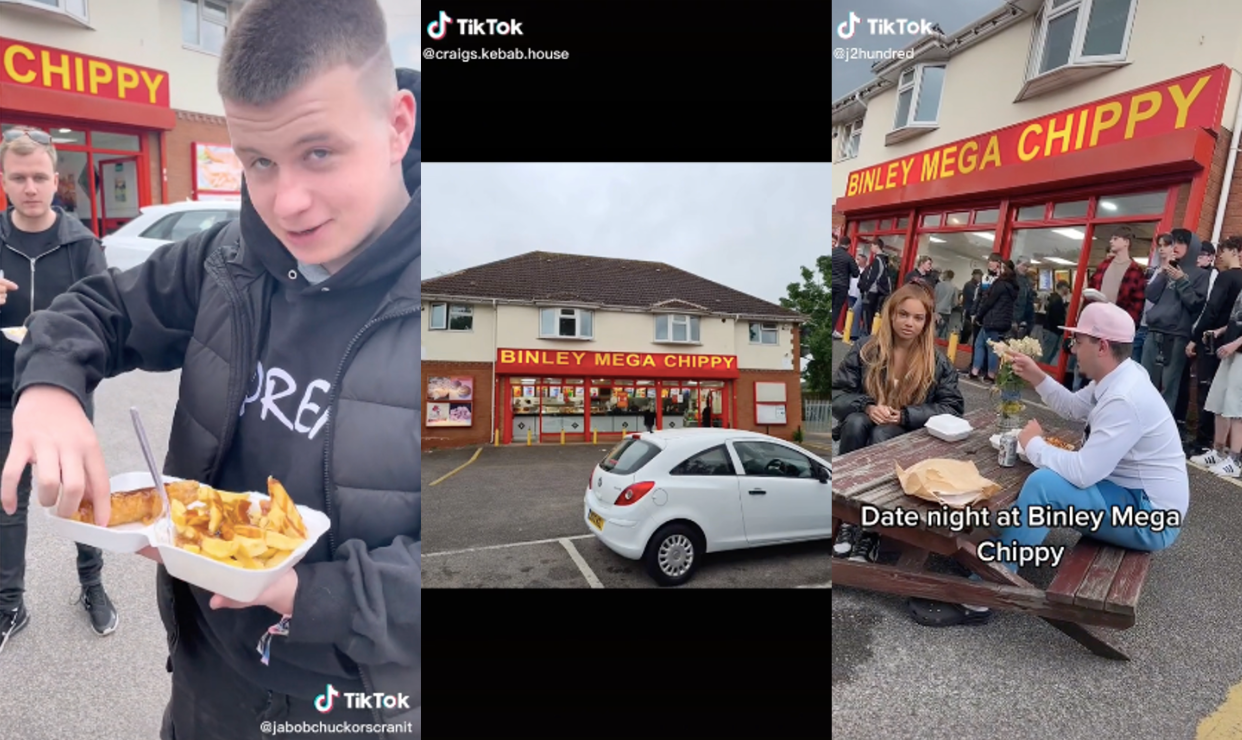 A Chippy In The Midlands Has Gone Viral, Much To The Confusion Of The Owners
Coventry’s Binley Mega Chippy has gone viral on TikTok this week, much to the confusion of the community and owners as thousands travel to try a battered sausage and chips. The overnight sensation has got fans from across the region, country, and beyond to come for a visit, causing huge queues and making people question where their fame has come from. The chippy was slowly gaining momentum on TikTok after appearing on a slideshow of the best British chippies by @craig.kebab.house but it truly rose to fame after @binleymegachippyfan53 created a catchy soundtrack. The “Binley Mega Chippy” song has become a viral tune with #BinleyMegaChippy receiving 322.5 million views so far as more take the trip to Coventry, with videos of well-known foodie creators reviewing their food, popular vloggers paying a visit and even date nights getting some fame. Each video is getting thousands of views as it takes up the FYPs of those within the U.K. and outside. Even popular media outlets like Vice have taken a trip over to see the hype and speak to the owner—and to rate the food. If this doesn’t show the power of social media—especially TikTok—then what will, as young people spend even more time online and TikTok becomes a young Europeans foodie inspiration, it’s the place for brands (especially within the food industry) to get involved, in hopes of a viral success.

Halsey’s record label is finally allowing them to release their new song after the musician called them out for being pressured to create a fake viral moment on TikTok.

In other K-pop news: BLACKPINK went viral for participating in the “Jiggle Jiggle” trend on TikTok.

Harry Styles collaborated with Apple to recreate the brand’s iconic “silhouettes” ad from the 2000s, but this time to promote AirPods.

Meanwhile, Styles is giving the money from the Apple AirPods commercial to a refugee-aid organization—and is donating $1 million to nonprofit organization Everytown following the tragic school shooting in Texas.

The emo revival continues as the #emo hashtag trends, with a whopping 17.7 billion views.

Shirtless scenes of Miles Teller from Top Gun: Maverick are all over TikTok.

Marvel and Sony Pictures’ Morbius starring Jared Leto is allegedly returning to 1,000 theaters because of the memes all over the internet.

According to Disney+, Star War spinoff Obi-Wan Kenobi is the streaming service’s biggest show premiere yet.

Meanwhile, Ewan McGregor is defending Obi-Wan Kenobi co-star Moses Ingram after she received racist messages from people in the fandom.

West Side Story breakout star Rachel Zegler has been cast to star in the upcoming Hunger Games prequel film.

The Love Island stars for the next season have been released including Tasha Ghouris the first death contestant and ex-footballer Michael Owen’s daughter.

North America
We Need An American Girl Doll Who Is on The Viral List
TL;DR Instagram and TikTok are coming up with some wild American Girl doll...
North America
You Got #Krissed is One of the Top Trending Hashtags This Month
According to Gen Z, trends start on TikTok first before spreading to other platform...
North America
Beyonce Breaks The Internet With Her #AntiWork Anthem “Break My Soul” on The Viral List
TL;DR: Hasbro’s Nerf debuted its first-ever mascot—and the internet is kin...