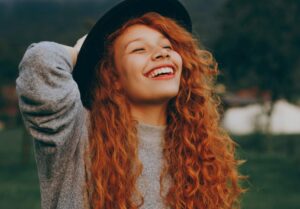 After two years of hold-ups, young Europeans want to live their best lives—and they’re tapping “main character energy” to do it…

After two years of living with the life-altering uncertainty of a pandemic, Gen Z and Millennials are re-evaluating what’s important to them—and many are taking the initiative to make some changes in their lives. In our latest trend research, young Europeans tell YPulse that, among other things, COVID has influenced these gens to shift their mindsets and take a more intentional approach to life. In fact, 78% of young Europeans say they’re proactively trying to have a certain mindset / approach to life—and many are doing this by putting themselves first and prioritizing their own happiness. And while this undoubtedly looks different to everyone, one major trend has arisen from this perspective shift: “main character energy,” or the idea of being the protagonist of their own lives. Now, #maincharacter and #maincharacterenergy are trending across social media (with 7 billion and 170 million views on TikTok, respectively), and young Europeans are using the mindset to be their best selves and chase their happiness.

But what does this look like IRL? In our just-published WE Main Character Energy trend report, we dig into what exactly this approach to life looks like, starting with exactly how many really think of themselves are the main character:

When given the definition, “Being the main character of your life is thinking of yourself as the protagonist: actively taking control of your life, trying to focus more on yourself, and making your wants and desires first and foremost,” more than half of young Europeans say they think of themselves as the main character. And with just a third saying they don’t, it’s clear that this mindset is more than just a hashtag—these gens are actually taking it to heart. This is especially true of young Spanish and French consumers, 57% and 56%, respectively, say they think of themselves as the main character. What’s more, 53% say being the main character is a good thing, and the top quality they associate it with is confidence. In other words, it’s not about being selfish and attention-seeking. Instead, it’s about making positive changes and choices—which is what those who are embracing main character energy are doing: 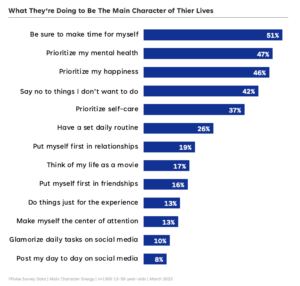 When we ask young Europeans what they’re doing to be the main character of their lives, posting on social media and making themselves the center of attention are far from the top of the list. In fact, 54% agree that you can be the main character of your life without posting it on social media, and 71% say it’s a negative thing when people act like the world revolves around them. Instead, Gen Z and Millennials are focusing on more internal routes to happiness. More than anything, these gens are making time for themselves and putting their mental health first. Millennial females are the most likely to be doing both of these things, with 64% saying they’re making time for themselves and 58% saying they’re prioritizing their mental health.

Mental health has been a priority for Gen Z and Millennials for a while now, but the past two years have forced them to pay even closer attention to their inner lives. In our WE mental health report, we asked young Europeans what areas of their lives have been most negatively impacted by COVID, and the top response was their mental health, with 41% saying it took a hit. Meanwhile, “focus on my mental/physical health” is the top thing young Europeans started doing during the pandemic that they want to keep doing—and it’s a top thing they’re doing to be the main character of their lives, too.

And they’re tapping self-care and the power of “no,” too

Relatedly, young Europeans are prioritizing self-care as a way to keep up the main character energy in their lives, which can include everything from participating in mystical practices to focusing on their beauty and skincare routines to going all-in on “feral girl summer.” But they’re making more concrete changes, too: 42% are saying no to things they don’t want to do anymore, which could be as simple as not going to a party or as major as resigning from their jobs, which many young people have done in the past year. Meanwhile, 26% say they have a set daily routine, and one in five are putting themselves first in their relationships. With all of this put together, it’s clear that young Europeans are using this mindset as a way to live their best lives and make positive changes. And while #maincharacterenergy may be all over social media, the reality is that this intentional perspective is helping them bounce back from a difficult period of time.

North America
Young People Are Seriously Done With Facebook on The Viral List
TL;DR Facebook is in hot water with already waning young users for supplyi...
Western Europe
4 Brands Reaching Young Europeans With Mental Health Marketing
Young consumers are redefining what wellness is, and they want brands to get involv...
North America
3 Stats Show Young People Are Doing Wellness Their Own Way
Wellness goes beyond physical and even mental health for the younger gens… T...