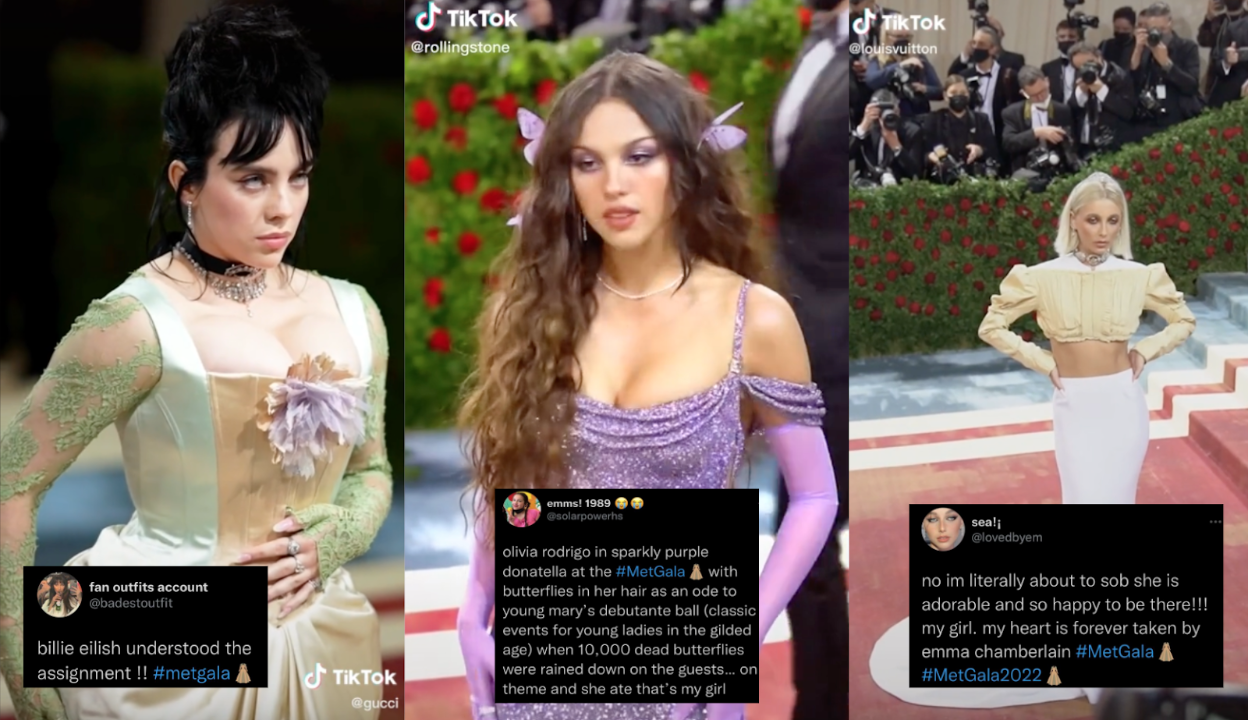 The Internet Can’t Stop Meme-ifying the Met Gala
In 2021, we told you that Gen Z was the new face of the Met Gala—and this year, young celebrities and influencers took over the red carpet once again. YouTuber Emma Chamberlain was tapped as one of Vogue’s correspondents, while TikTok stars like Addison Rae and Avani Gregg were spotted on the red carpet. This year’s theme was “Gilded Glamour,” a concept paying homage to New York’s Gilded Age when “excess and grandiosity defined both the decades and the fashion.” Olivia Rodrigo stopped by fashion’s biggest night fresh off her SOUR tour performance at Radio City Music Hall donning a lavender Versace gown with a Y2K-era touch of butterfly clips, while Billie Eilish opted for a regencycore-inspired look in a custom Gucci dress. Met Gala regulars like the Kardashians and Jenners made an appearance as well, while some cast members of Bridgerton and Euphoria made their debut. YPulse’s Pop Culture Redefined trend report found that in 2021 the Met Gala became a top cultural moment for Gen Z females as they took to social media to dissect looks and create memes about their favorite celeb guests. This year, young users flooded social media with commentary and memes of the big event once again, making it a huge trending topic on TikTok. The hashtags #metgala and #metgala2022 racked up billions of views, and beyond. While Kim Kardashian and Kendall Jenner sparked one of last year’s most memorable memes because of opposing looks, their sister Kylie Jenner was the focus of one of this year’s biggest memes, thanks to her Off-White white ruffled gown and baseball cap/veil ensemble. @IamHarrison242 tweeted a photo of Kylie in her veil with the caption “The onions on my counter watching me bring home wendys for the 3rd night in a row,” while editor Katie Packer tweeted the same image with the caption “what the fan used to see before I talked into it to make my voice distort.” While many fans praised some celebrities (like Blake Lively a.k.a Serena van der Woodsen and Billie Eilish) for “understanding the assignment” with their Gilded Age-homage looks, many also questioned if some famous attendees were even on theme. @nanastudioz tweeted “gilded age has to be the easiest, most easy to follow met gala theme of the latest years yet celebs and designers are still not following it so im starting to believe they just dont give a f*ck and use the gala to promote their ready to wear.” Rating looks, meme-ifying the red carpet moments, and judging how on theme celebrity attendees are looks like it’s turning into an annual tradition for young consumers on social media. 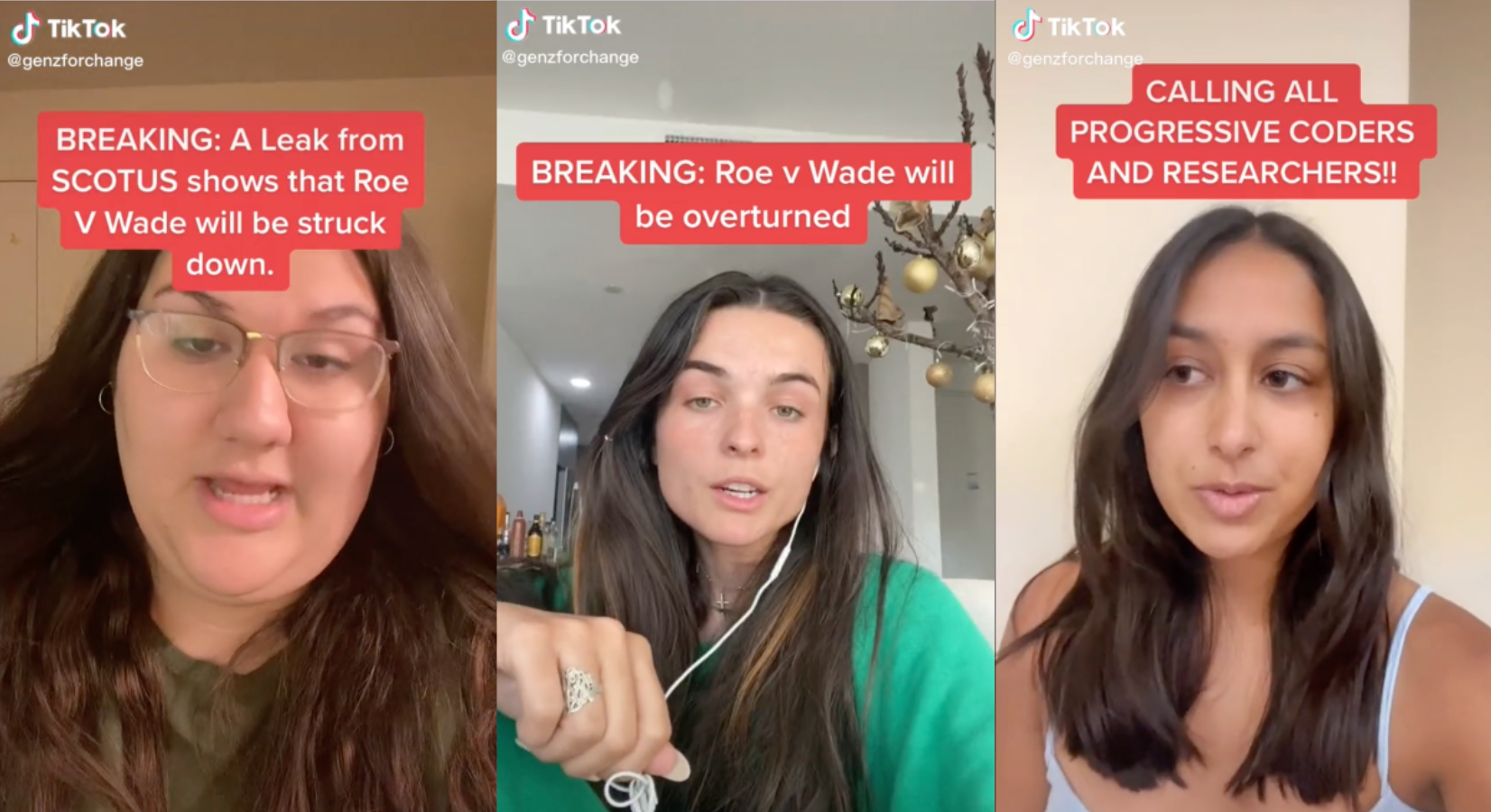 Young Activists Are Protesting Online Following the News About Roe v. Wade
While the Met Gala was taking place on Monday night, Politico published a leaked draft opinion suggesting that the Supreme Court plans to overturn Roe v. Wade. Young activists were quick to speak out online and organize ways to fight back. (Binchtopia podcast co-host Julia Hava tweeted, “The Supreme Court overturning Roe V. Wade while the whole country is distracted by an inconsequential event celebrating extreme wealth is, unfortunately, the most symbolic representation of America rn,” while other Twitter users shared similar sentiments.) Gen-Z for Change is one of the groups that quickly responded to the news. Launched in 2020, it joins the growing number of activist groups and movements, like March For Our Lives and Sunrise Movement, led by young people who want to protect their rights and create a better future for their generation. The hashtag #roevwade has over 377 million views on TikTok. And between Monday night and Tuesday morning, Gen-Z for Change already posted three TikTok videos (all of which racked up millions of views) about the draft opinion, informing their followers about what it means and how they can get involved. Aside from educating its followers online, the group is recruiting coders to build systems that can crash future anti-abortion sites, especially in the states where abortions would be completely outlawed. TikTok has become a vehicle for digital activism and we told you about how users used a similar tactic last year to overwhelm anti-abortion sites in Texas following the state’s law to limit access to abortions. Even some brands including Ben & Jerry’s, Bumble, OKCupid, and Yelp have spoken out about defending Roe v. Wade. YPulse research found that abortion / birth control is a social cause that young people are passionate about right now. 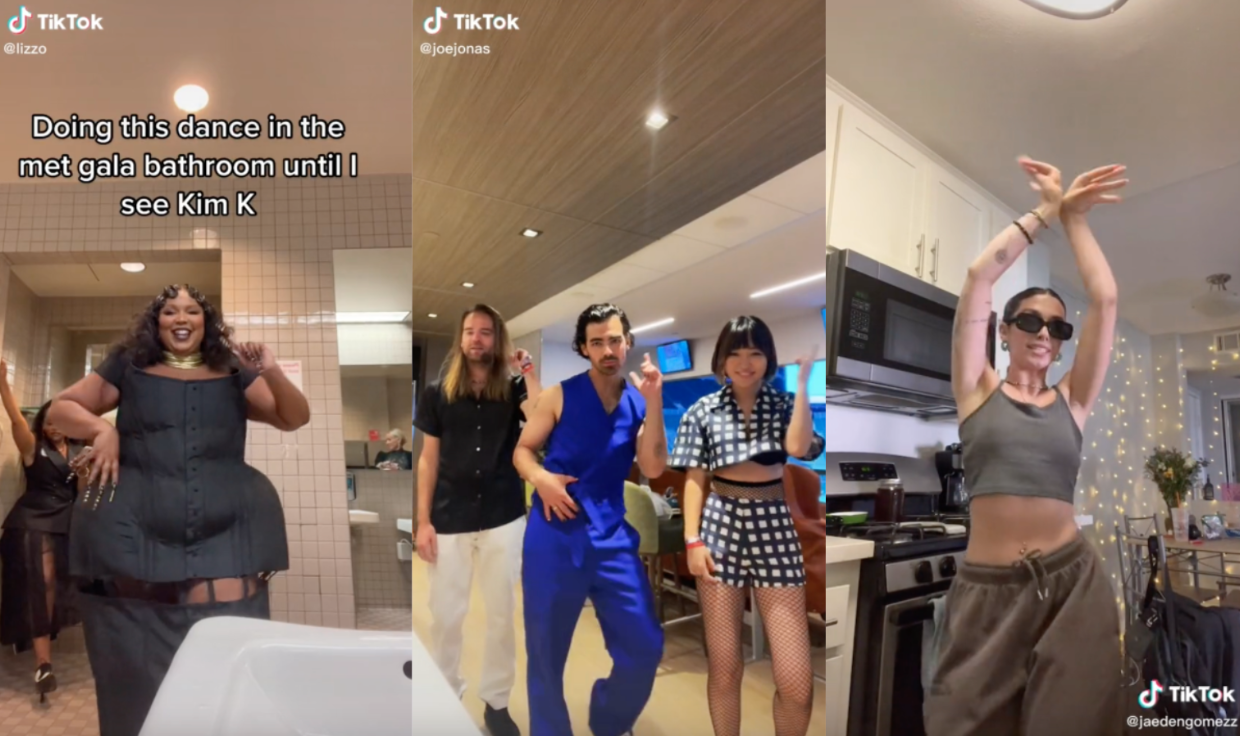 Lizzo’s “About Damn Time” is Poised to Be TikTok’s Song of the Summer
YPulse told you about how TikTok has defined the songs of the summer for years—and it seems like that could be the case again. Last month, Lizzo dropped “About Damn Time,” a new track from her upcoming album, Special. Shortly after its release, TikToker Jaeden Gomez choreographed a dance for the song that quickly went viral on the app as other users started to share themselves doing the moves. Celebrities are also joining in, with Joe Jonas and his band DNCE participating in the challenge in a TikTok video that garnered 2.4 million views, and Jonathan Van Ness performing the dance wearing Lizzo’s Yitty shapewear in an Insta Reel that’s gotten over 300K likes. So far, the track features over 137.9K videos on TikTok alone, while other remixes have emerged on the platform. The dance has gotten so much attention on they app that it got back to Lizzo, who celebrated its success on Instagram in a post with the caption “I TOLD YALL I GOT THE SONG OF THE SUMMER— WE THE #1 SONG ON TIKTOK—IM POSTING EVERYONE THAT DOES THIS DANCE BY @jaedengomez,” (note the credit given to the choreographer) sharing a video of herself doing the dance in a black bikini and boots, and shared a series of videos of other random fans participating in the trend. Earlier in the week, she posted a video of herself doing the dance at the Met Gala in a video that generated 15.8 million views (hello crossover viral content). Between the Met Gala and going viral on TikTok, Lizzo certainly is having a big week: she also debuted another new song earlier this week during Logitech’s Song Breaker Awards, which was hosted by Bretman Rock and took place inside Roblox. 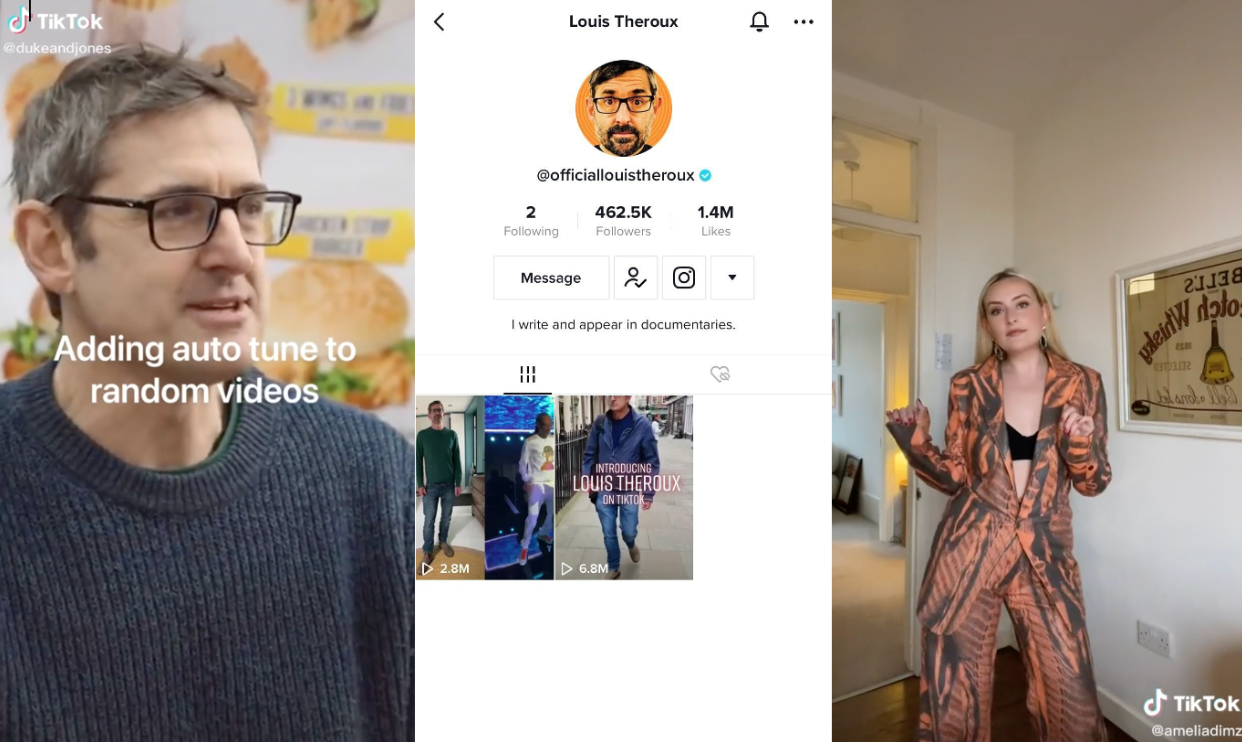 Louis Theroux joins TikTok following his viral “Jiggle” rap
Early this week, Louis Theoroux —a well-known writer, broadcaster and documentarian from the U.K.—joined the world of TikTok by posting a video under his viral autotuned rap that’s replaying on the FYP of TikTok consumers. The rap has gotten up to 1.2M videos, with the original video edited by Manchester based DJ @dukeandjones going up to 43.9M views so far. The creators took the clip from a recent interview Louis had with Amelia Dimoldenberg for the hit web series Chicken Shop Date, in which they spoke about his late 90s documentary called Louis Theoroux’s Weird Weekends where he ended up performing a live rap–which has now gone viral across TikTok. Of course, creators have produced a dance to go with it, matching the mood of the song perfectly with the likes of @blondebrunetteredredhead and interviewer @ameliadimz sharing their recreation. Even the BBC TikTok page gave viewers a clip of the original rap back in the late ‘90s, with many commenting on the progression of Louis’s rapping over the years. @officallouistheoriux joined the scene by posting this TikTok under the sound of welcoming himself to the “party” and getting over 6 million views and over 460K followers within a week. While his second TikTok is a reaction to Snoop Dog as they both dance to the “Jiggle rap,” he has yet to release anymore. But fans can get more of Louis in his most recent series Forbidden American by the BBC where he continues to look into the rap scene, the far right, and sex work within the U.S. 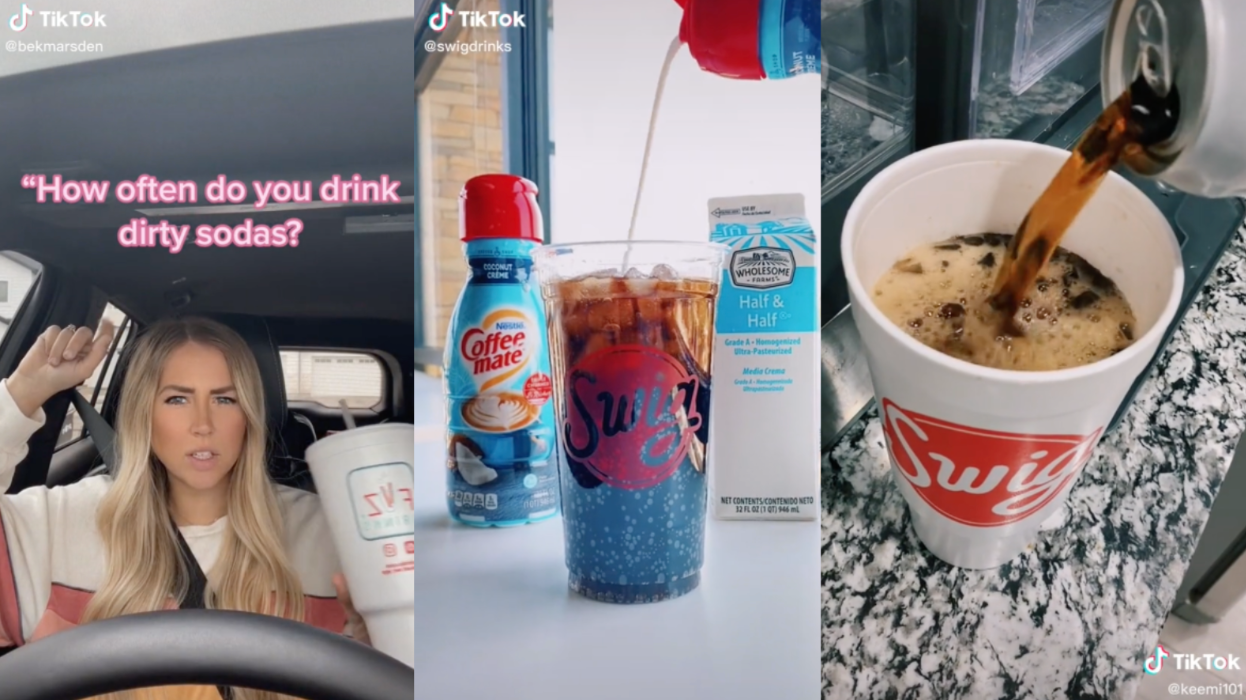 The “dirty soda” trend is taking over TikTok, thanks to Olivia Rodrigo.

The “whimsy-gothic” aesthetic is taking over social media, which is inspired by Practical Magic and features “romantic, historical remnants of the gothic fairytale.”

TikTokers are using PSY’s “Gingnam Style” as a way to cope with grief and traumatic experiences in their life.

A man “modded” a Fisher-Price Game & Learn Controller so it could play Elden Ring.

A Dollar Tree manager was fired after posting an anti-Gen Z sign on the window.

Disney and Marvel Studios’ Doctor Strange in the Multiverse of Madness has already outsold Warner Bros, The Batman and other 2022 movies in pre-sale tickets.

HBO Max premiered the first footage of its Game of Thrones spinoff, House of the Dragon.

Harry Styles has announced the dates for his upcoming tour.

Avril Lavigne joined Olivia Rodrigo onstage for a performance of “Complicated” during the SOUR tour.