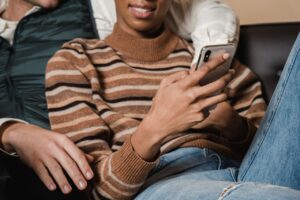 While we may still be in the COVID era, YPulse data shows that the vast majority of young Europeans are no longer quarantining and are returning to in-person activities. In fact, Western European countries have dropped many restrictions, allowing consumers to largely return to normal life—or the new version of it anyway. Now, 96% of young Europeans say they’re comfortable with some in-person activities. Meanwhile, travel is booming across the region, indicating that the long-awaited hot vax summer may finally come to fruition.

It would seem natural then to see a corresponding drop in their consumption of video content. After all, though young consumers were watching a lot of Netflix before the pandemic, screens became central to their survival during lockdowns, making video consumption skyrocket among Gen Z and Millennials. But even as they’re getting out of the house more, our recent WE Media Consumption report shows that young Europeans’ consumption of video content isn’t dropping yet. In fact, their weekly consumption has increased across many platforms in the last year: 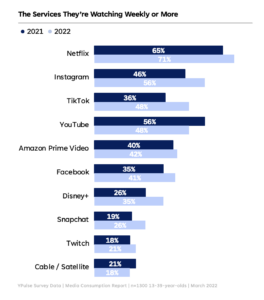 Though Instagram is still the top social media platform young Europeans say they’re watching video content on, much of the rise of social videos is thanks to TikTok, the popularity of which has spurred other platforms (including Instagram) to launch copycat features. Meanwhile, TikTok has quickly climbed the ranks to become one of their most-used social media platforms. In 2021, it was their No. 5 most-watched service, jumping to No. 3 now—and No. 2 among Gen Z. In fact, 64% of Gen Z now report watching video content on TikTok weekly or more often, up from 48% in 2021. Millennials, too, are catching the TikTok bug: 42% of Millennials are watching TikTok weekly or more often compared to just 31% in 2021.

But Netflix is still their most-watched service

As popular as social media videos are getting though, Netflix is still young Europeans’ top form of video entertainment by a significant margin. Despite news of a mass Netflix exodus, even more 13-39-year-olds in Western Europe are tuning into the service now than in July 2021, which is driven in part by Netflix’s track record of churning out hit after hit: our WE TV & Entertainment report shows that Netflix original series from Squid Game to Money Heist (or La Casa de Papel as it’s called in its home country of Spain) are their favorite shows. Meanwhile, other streaming platforms such as Disney+ are gaining young viewers’ attention, too, indicating that all around, young Europeans will likely continue to watch a lot of video content no matter how “normal” life outside the home gets—which is also confirmed by how often they’re watching on their devices: 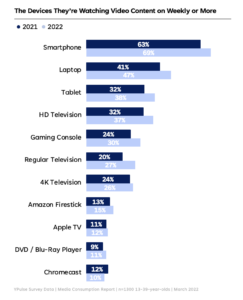 Young Europeans’ video consumption has increased on nearly every device

From smartphone to TV, Gen Z and Millennials in Western Europe report they’re using almost all devices more to watch content weekly than they did in July 2021. The increased use of screens across the board indicates that their media consumption has not slowed down. In fact, in our WE TV & Entertainment report, just 17% of young Europeans told YPulse they planned to watch fewer videos on the internet post-COVID while 69% said they’d be watching the same amount—and 18% said they’d actually do this more.

Meanwhile, smartphones are continuing to dominate their video consumption, driven in part by the rise of videos on social media, which became even more popular during the pandemic—and are continuing to capture young Europeans’ attention.