YPulse’s media consumption report digs into how much video content young people are watching, the entertainment stealing their attention, and where brands should reach them now. We’ve told you before that Gen Z and Millennials’ media viewing habits are not the same, withGen Z much more likely than Millennials to use social media as entertainment and watch video content on social platforms, and more likely to use their smartphones to watch video weekly as well. Our most recent Media Consumption Report shows that these differences persist–but it’s not just how and where they’re watching content that differs, but the kind of content they’re watching as well.

In our recent behavioral report, we asked 13-39-year-olds, “What type of video content are you watching weekly?” and asked respondents to choose from a list of over 30 genres. And while the top 10 ranking for both generations have some key commonalities, we found that certain genres of entertainment are clearly more popular among Gen Z: 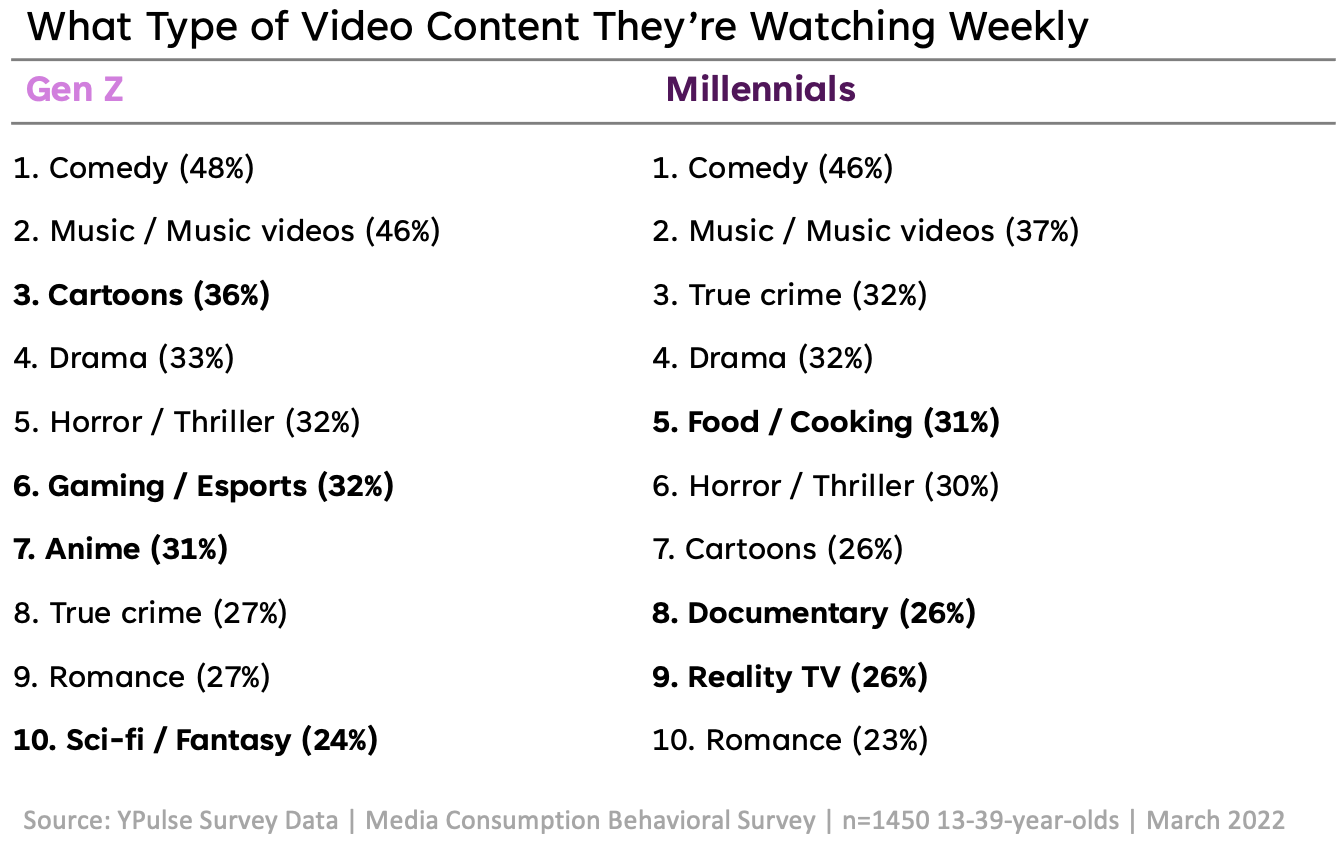 Comedy and music / music videos are the top genres both Gen Z and Millennials are watching weekly
Comedy and music / music videos topped the list of watched genres for both Gen Z and Millennials. Early on during the pandemic, we told you that young consumers were turning to pure content as a way to make them laugh and find happiness during a difficult time. Certainly, classic TV comedy series like The Office and Friends have always served as a content cure for young viewers, but newer comedy shows like Netflix’s Never Have I Ever are also getting their attention. But of course, for these gens comedy content is also a huge part of social media. In the last year, social platforms have also been trying to ramp up their comedy offerings: TikTok debuted Stapleview, its first sketch comedy show that offers “the best in social media and influencer comedy with segments, sketches, musical bits,” and more. Meanwhile, music / music videos is another top type of content that young consumers are watching on a weekly basis. But notably Gen Z is even more likely than Millennials to say they are watching music content weekly. This could be due to the fact that they’re seeing music content in their social feeds more frequently–YPulse’s Music Report shows that Gen Z is more likely to discover music on social media and to say they listen to music via social media as well.

Gen Z is more likely to be into cartoons and anime
While drama is another type of content that ranked high on both Gen Z and Millennials’ top five ranking, much of their top 10 genres diverge after that. For one, Gen Z is more likely than Millennials to say they watch cartoons on a weekly basis compared to Millennials. Young people tell us that animated TV shows like Family Guy and Rick and Morty are some of their favorites, andstreaming services like HBO Max and Apple TV+ have been ramping up their adult animation offerings but Gen Z is the bigger audience for these offerings.. In line with cartoons, we found that Gen Z is more likely than Millennials to watch anime (which appears a little lower on the list) weekly. YPulse has been tracking young people’s borderless love for content from other cultures for years now, and called out anime as one of the biggest examples of global trends taking off with Gen Z. The “Netflix Effect” led to anime shows like Avatar: The Last Airbender and The Legend of Korra to trend, making them some of the most-watched series on the streaming platform. Last summer, manga and anime streaming service Crunchyroll announced they surpassed five million paid subscribers globally, and 120 million registered users overall. Again, the younger generation is likely driving this popularity.

Gaming / Esports is a top type of content that Gen Z watches weekly
Another type of content that made it into Gen Z’s top 10 rankings and not Millennials is gaming / eSports. YPulse’s gaming research found that the majority of Gen Z is gaming to some capacity. Fortnite and Roblox are already some of the top video games that young gamers are playing—and in recent years, they’ve managed to launch new features, skins, and virtual events to keep them engaged especially as the metaverse expands. But watching other people play video games is also a major part of Gen Z gaming activity.

Millennials are more likely to like true crime and food / cooking content
Of course, there are some genres that are more popular among Millennials, and true crime is a top genre that Millennials tell us they watch on a weekly basis. In 2020, Millennials fueled the popularity of docuseries Tiger King and other similar content. In fact, true crime has been so popular that some brands have been incorporating it into their marketing to reach Millennial consumers: Oatly created a true crime-style podcast to promote its new plant-based milk, while Tinder debuted a whodunit-themed Swipe Night experience. And of course, we can’t ignore their love for true crime podcasts either. Meanwhile, while anime is a genre that appears only on Gen Z’s top 10 rankings, food / cooking is a type of content that only appears in the older gen’s top 10 list. We told you that Gen Z isn’t eating up food media like Millennials have—and our research shows that Millennials are more likely than Gen Z to watch online videos about food / recipes, watch TV shows about food, cook a meal they saw an influencer cook or that they saw trending on social media, post photos of their food or drinks on social media, and read food blogs and magazines. But it’s still uncertain whether Gen Z will also adopt the same enthusiasm toward consuming food content on social media and beyond.

North America
Young People Are Seriously Done With Facebook on The Viral List
TL;DR Facebook is in hot water with already waning young users for supplyi...
North America
Gen Z and Millennials Are Using QR Codes for More Than You Think
QR codes are the easiest way to deliver young consumers a link, and they’re ready ...
North America
Young Consumers Are Trusting Influencers For These Product Recommendations
Young consumers trust online celebrities more than any other public figure—and thes...