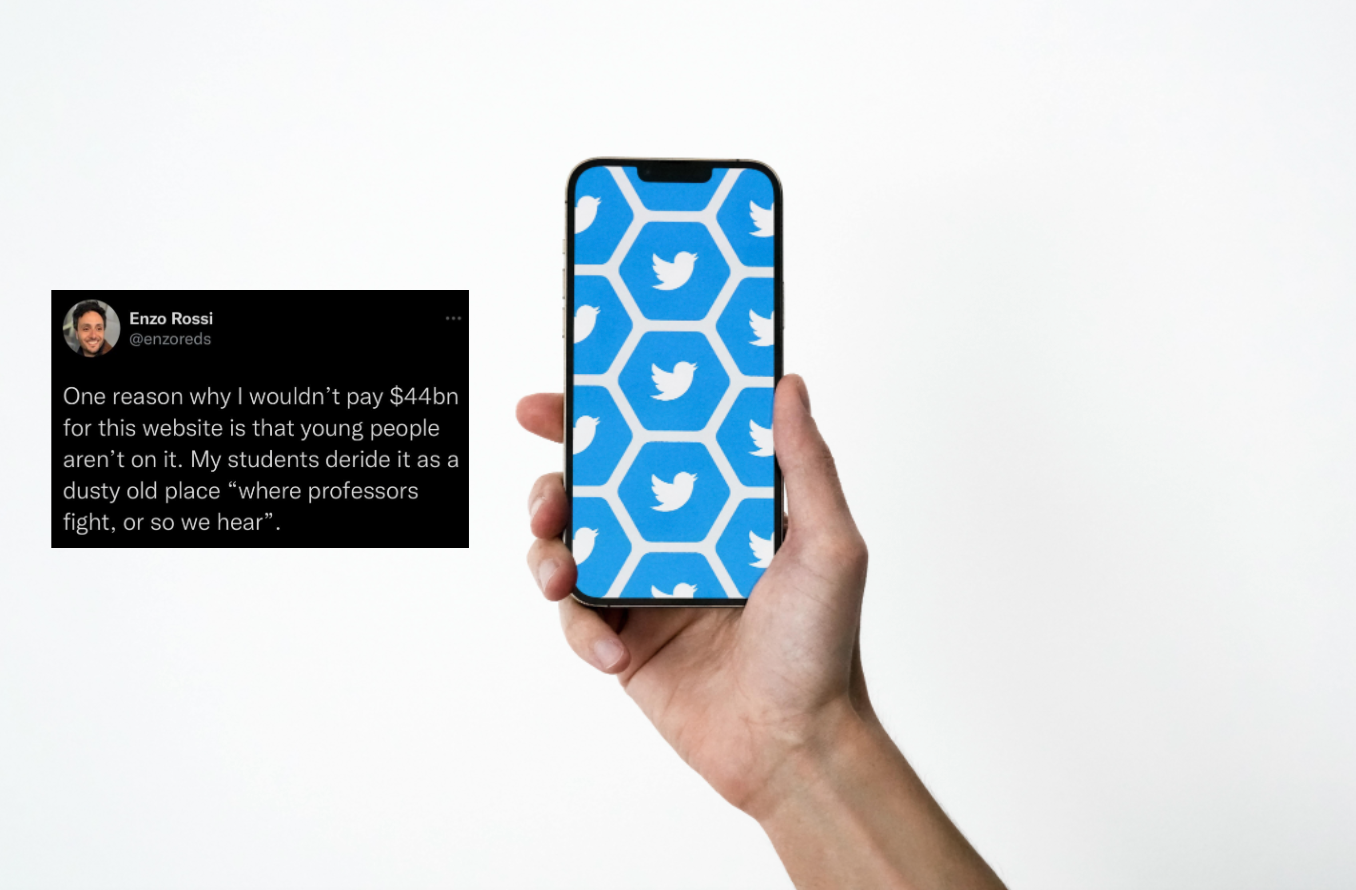 Elon Musk’s Twitter takeover seems to be all anyone can talk about right now. On Monday, it was announced that Twitter agreed to sell the social platform to Musk for $44 billion. And of course, it provided a lot of meme fodder. But while new organization after news organization are showing the data on the company’s stock price in wake of the news, YPulse has been looking at another chart that the billionaire might want to see: 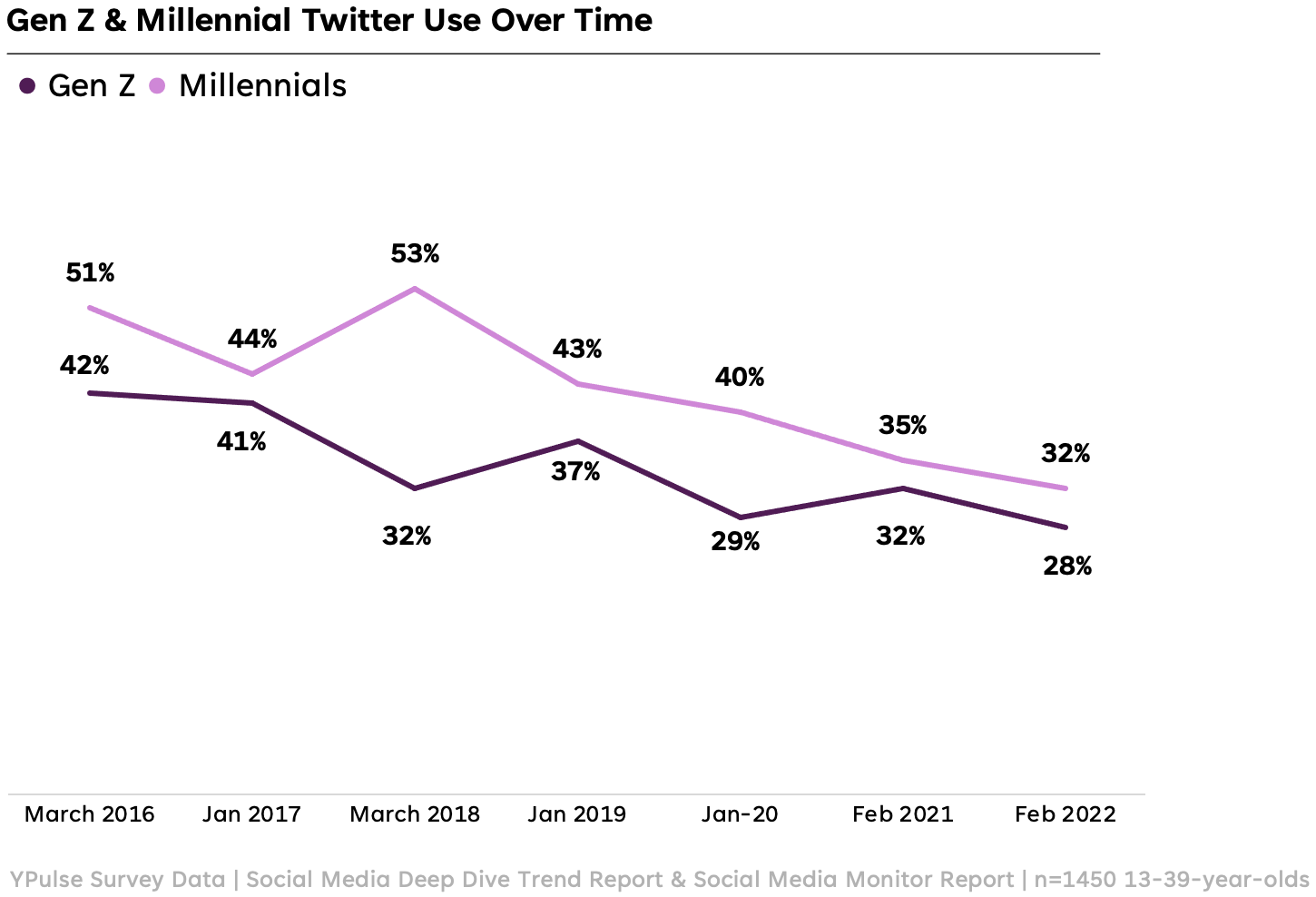 Twitter usage has steadily declined among Gen Z and Millennials in the last six years
YPulse’s Social Media Deep Dive trend report has been tracking young people’s usage on Twitter for years—and our research shows that usage among Gen Z and Millennials has actually been declining since 2016. Twitter use has always been higher among Millennials, but it has fallen in the last six years, from 51% in 2016, to 32% in 2022. Meanwhile, 41% of Gen Z reported using it in 2016 and  currently 28% say they use the app—highlighting the significant drop for both gens. Currently, our data shows that BIPOC young consumers and Millennial parents are more likely to be using Twitter than other groups, but not by large amounts. Meanwhile, male and Millennial users are the most engaged on the platform. CNBC reports that Twitter has significantly less users compared to other social platforms: Facebook, YouTube, and TikTok  have billions of users each, while Twitter clocks in at around 400 million users. Some analysts are optimistic that Musk is talented enough to turn around user growth on the platform, but while we know that many Gen Z and Millennials admire Musk, it’s difficult to believe that they will come flocking to the platform after so many years of decline.

Negativity on Twitter could be the reason for the usage drop among these gens
While the reasons for the drop in Twitter usage haven’t been necessarily obvious, it could be that negativity on the app is impacting interest in it. Compared to other platforms, Twitter users are more likely to be opening the app to follow the news, with news a top reason that both Gen Z and Millennial users visit the app. While entertaining content is the top reason Millennial users say they visit, it’s not as strong a driver as it is for YouTube, TikTok, or Instagram users. And of course, Gen Z users’ top feelings about the app reflect this. In addition, young consumers overall are not likely to choose Twitter as an app they would describe as “creative,” “fun,” or “entertaining.” Instead, they’re more likely to call it “mean,” “boring,” and “fake.” There is little doubt that these perceptions are impacting overall use, and are likely reasons behind the drop in user numbers among Millennials as well. But the question remains: will Musk’s recent acquisition and promises to prioritize free speech on the app change young users’ minds?

Gen Z and Millennials are split in their feelings about Elon Musk and free speech
While Musk has a knack forgoing viral, and has consistently been a public figure who Gen Z and Millennials say define their generation, many Twitter users aren’t happy about the billionaire taking over the platform, with some already threatening to quit the app completely. Reuters reported that #RIPTwitter began trending on Twitter shortly after the news was officially announced, while The Good Place star Jameela Jamil was among one of the first celebrities to officially leave the platform following Musk’s buyout. Additionally, young consumers split when it comes to free speech on social media. Musk has been clear that free speech on the app is his priority, and politicians and organizations like the ACLU have been arguing online about their stance on the matter. But our social media behavior research shows that 51% of 13-39-year-olds disagree that “social media platforms are violating the 1st amendment’s right to free speech when they ban people from posting offensive content.”  Many of the debates on Musk and free speech go back to Donald Trump’s presidency and the banning of his Twitter account, and the majority of young people told us last year during the Capital Riots that they think social media platforms suspending Trump’s accounts was the right thing to do—with young respondents citing public safety and the spread of misinformation being too much of a problem that continues to be unchecked and that if the government won’t take action, “individuals and companies need to do so.” Many also worry that misinformation on the app could be worse if Musk stays true to his plans to be less stringent about policing what’s said on the platform.

Only time will tell whether Musk’s acquisition will impact user growth among Gen Z and Millennials, the decline from the last six years combined with young consumers’ thoughts on free speech tell us that there might not be too much growth. The buyout could also potentially bring in new kinds of users who agree with Musk’s vision, but could also .

cause some users to leave. But ultimately, Twitter hasn’t been a regular part of most young consumers’ lives for years, and it will be an uphill battle to make it a place they want to spend time again.

North America
Just How Big Has TikTok Use Gotten Among Gen Z?
No other platform has won Gen Z over as completely as TikTok–and these are the late...
Western Europe
2 Charts Show What Young Europeans Are Looking For In Their Careers
The pandemic caused young people to re-evaluate what’s important to them—and that i...
North America
4 Apps Attracting Gen Z Users With Anonymity & Authenticity
These four apps have been popping up everywhere and gaining Gen Z users’ attention ...