Everyone Wants To Be A Coastal Grandma on The Viral List 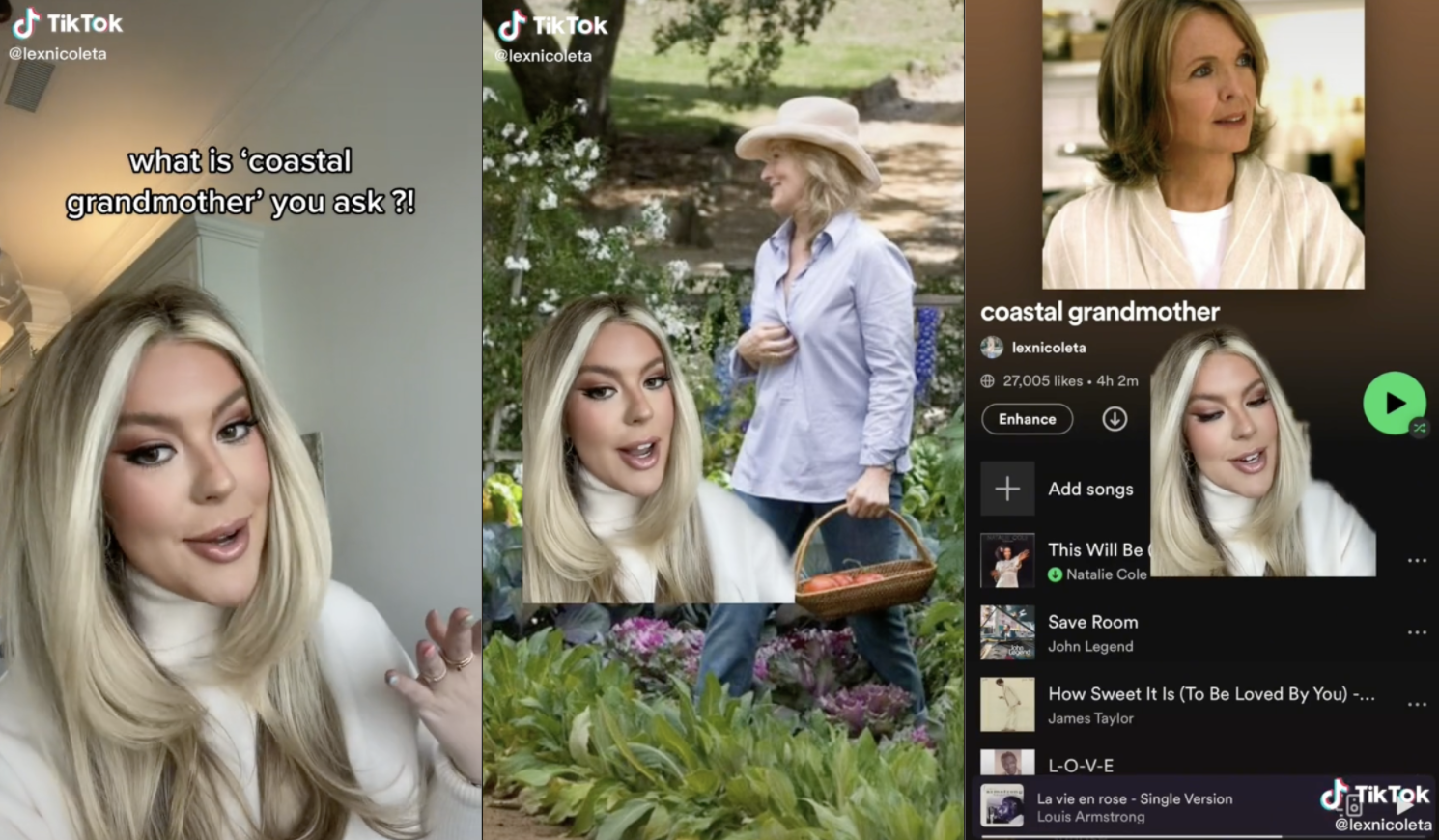 Gen Z and Millennials Are Channeling Their Inner Coastal Grandmother
Not only has #coastalgrandmother racked up more than 9M views on TikTok, the hot new aesthetic is inspiring home design searches: coastal grandmother searches have increased 334% on Google in the past week. So what is “coastal grandmother” you ask? As Lexi Nicoleta (@lexinicoleta) explains, “If you love Nancy Meyers movies, coastal vibes, recipes and cooking, gardening, cozy interiors, and more, you’re a good chance you might be a coastal grandmother…and no, you don’t have to be a grandmother.” Nicoleta coined the term “coastal grandmother,” and has since created an ongoing thread of coastal grandmother TikTok videos (which have racked up thousands of views), from hair products, to TV shows, tablescapes, Mother’s Day gifts, and even a Spotify playlist for achieving the aesthetic. The style has garnered so much attention that interior experts at the Secret Linen Store have crafted the perfect formula for channeling the “coastal grandmother” aesthetic at home. Their formula includes neutral palettes complimented with fresh blooms and vintage-style knick-knacks, a plethora  of throw cushions to ensure guests are comfy at all times, organized kitchen clutter (a.k.a. a kitchen that “feels lived-in”), linen materials to keep rooms cool and breathable (bonus points for incorporating linen tops to one’s wardrobe), flowy curtains, an abundance of lamps, and natural accents like rattan baskets and wicker. Not only does the coastal grandmother aesthetic exude comfort, it’s yet another internet aesthetic young people are building an online community around. 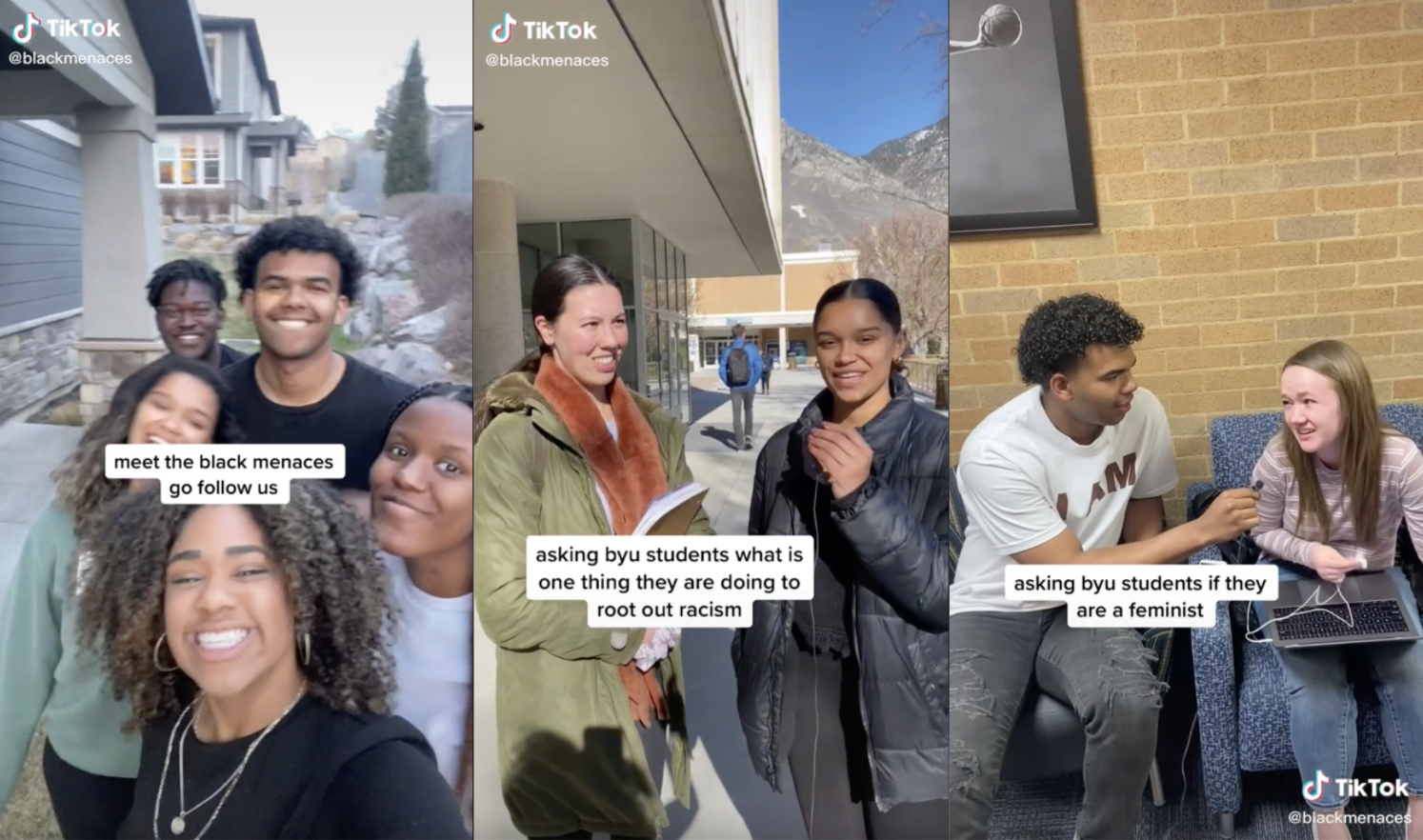 The Black Menaces Is A TikTok Group Challenging Students’ Perspectives at Brigham Young University
The private school is one of the most widely known campuses connected to the Mormon Church as it’s sponsored by The Church of Jesus Christ of Latter-day Saints, and a TikTok group formed by Black BYU students have organized to bring some (much-needed) perspective to their campus. Known as The Black Menaces, the group has garnered more than 600K followers on TikTok as they take viewers on a journey of asking BYU students questions related to race and politics. For example, in one of their most recent videos, the group asks a handful of students, “What are you doing to root out racism in your life?” Responses range from, “uplifting Black student voices,” “educate myself on racial issues,” and “be a nice person.” The Black Menaces is comprised of five members from BYU’s Black Student Union including Sebastian Stewart-Johnson, Rachel Weaver, Nate Byrd, Kylee Shepherd, and Kennethia Dorsey. Just 1% of students at BYU are Black, and The Black Menaces tell Insider inspiration for the TikTok group comes from a place of not feeling “welcome or safe” on campus while wanting to build awareness for their experiences—and educate their peers along the way. YPulse’s causes, charity, and activism research shows racism is the No. 1 issue Gen Z and Millennials are passionate about in 2022. Meanwhile, TikTok has become a platform to amplify the issues they care about and create change in the process. We told you about the BIPOC influencer houses brands should know about, and The Black Menaces is certainly one to keep an eye on as they continue making change in their community. 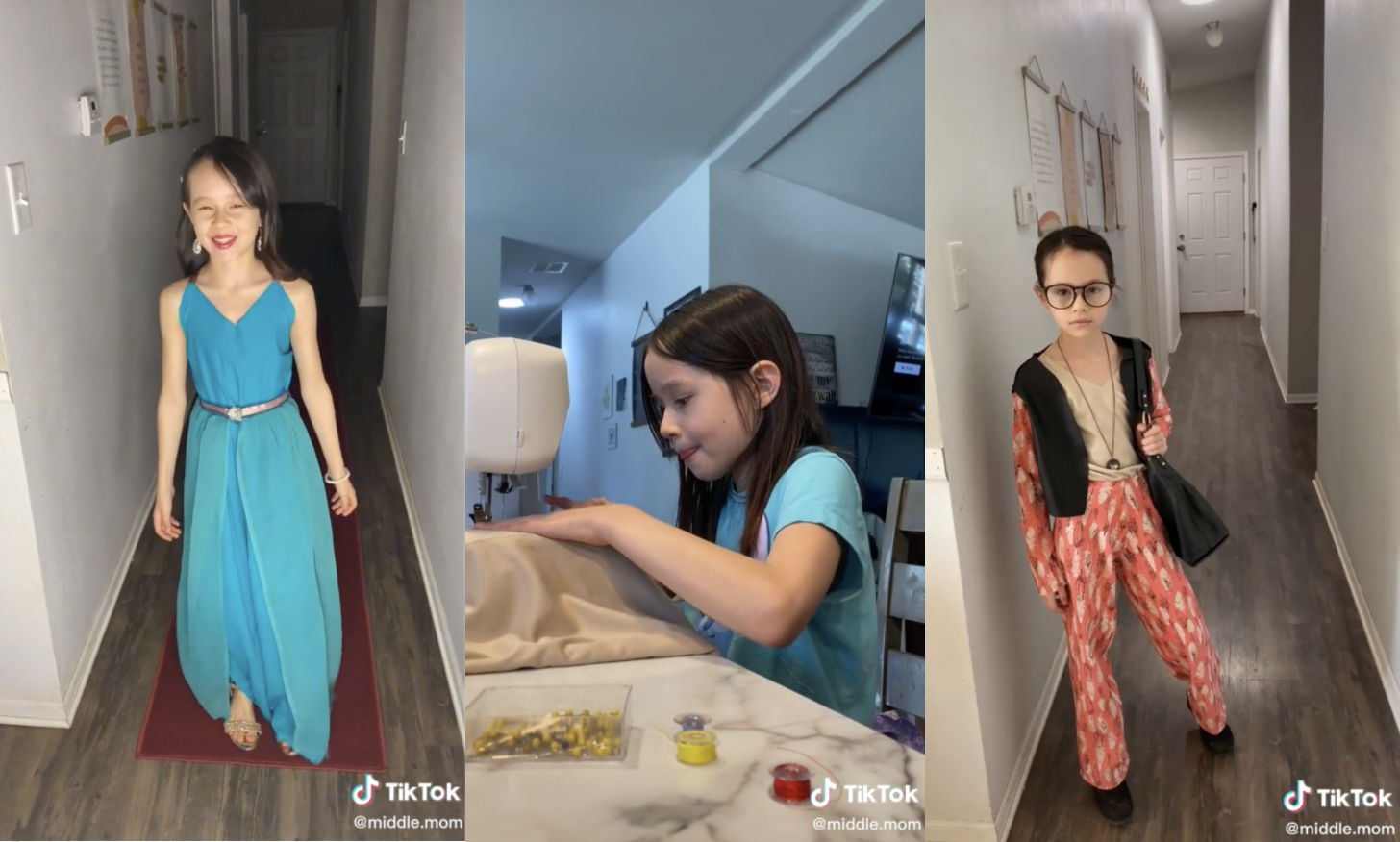 This Nine-Year-Old Fashion Designer Isn’t Just Adorable—She’s Catching Vera Wang’s Attention
She may only be nine, but Kaia Aragon has been designing clothes since last year after her mom gifted her with a sewing machine. Since then, the Colorado-based nine-year-old has created “one new outfit per day” and her mom has been uploading the designs on her TikTok account, which has over 600K followers. One of her designs includes a piece that was inspired by Disney’s Encanto and the video garnered a million views. Aragon told TODAY that her inspiration for outfits comes from sketching and she chooses whatever fabric she likes and “goes from there.” Her designs have gotten so much attention that fashion designer Vera Wang has even taken notice. On one of her TikTok videos, Wang left a comment that said “Love. <3” Wang also sent Aragon a new backpack and sewing machine, which her mom documented on TikTok. 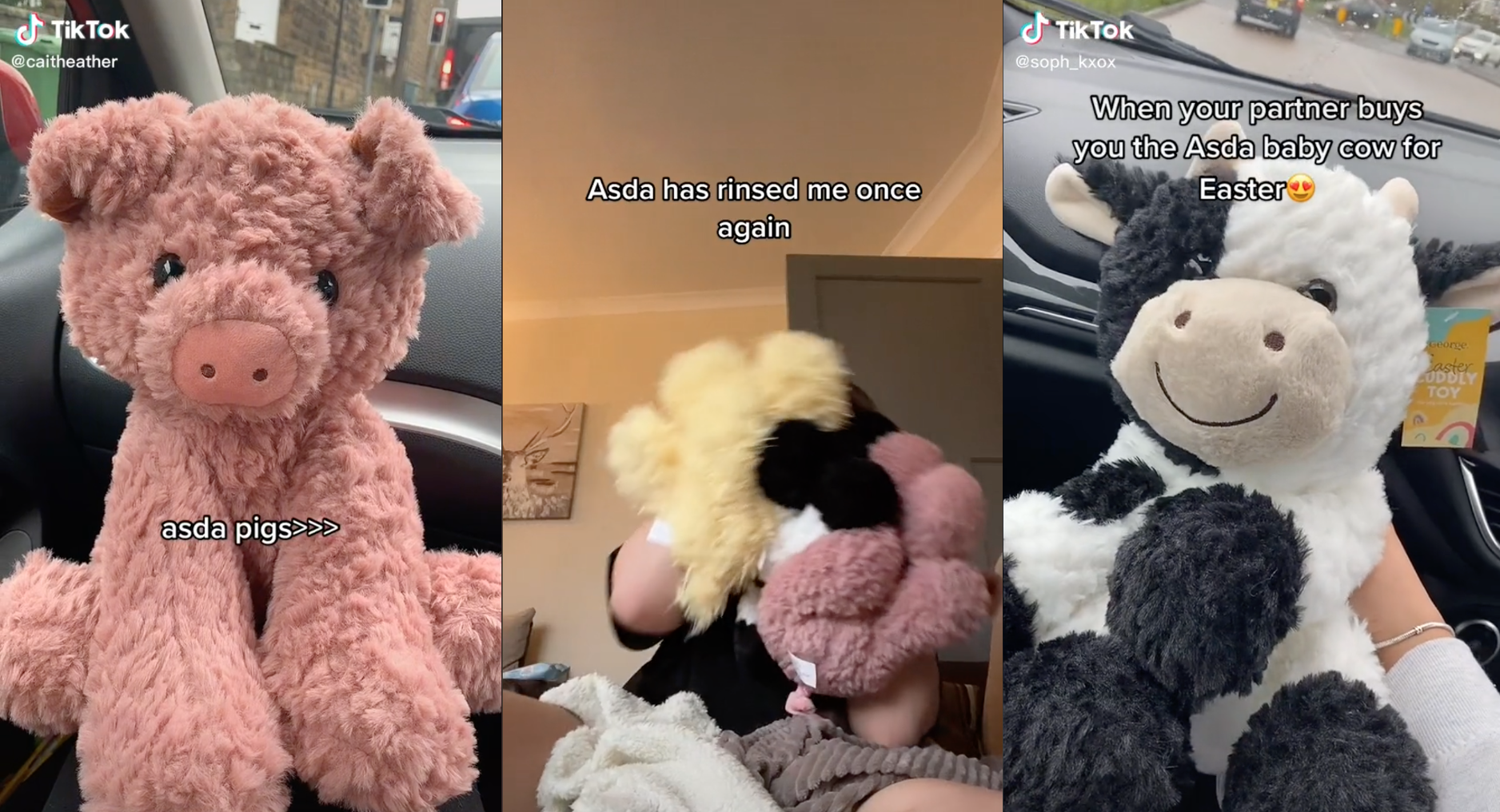 Forget a Chocolate Egg, a Soft-Teddy From Asda is The New Easter Gift According to TikTok
First it was the Build-a-Bear frog.  Now TikTok is showing off the new animal soft toys on the seasonal aisle of Asda. Content creator @caitheather posted a video of their new pig teddy–sherbet–under the trending sound from Bobs Burger, with the only caption being “asda pigs.” The simple vid has garnered over 670K views, and is just one example of how stuffies from Asda have gone viral on the app. As many U.K. consumers now rush their partners to their local Asda Supermarket, they’re turning to TikTok to show off which cute farm animal they’ve picked, encouraging others to grab one before Easter ends. #asdapig has so far gotten 832.4K views, with many showing off the other animals available to purchase, such as #asdacow with 504.8K views. Soft-toys are growing in popularity (especially amongst couples) as holiday gifts. The pumpkin teddy from Build-a-Bear is just one example of how teddies have become a much loved gift for many no matter what holiday. It’s not surprising that Asda has jumped onto the teddy trend, and supermarkets such as Morrisons and Tesco Extra have released their own as well.

Are We Sharing Boyfriends Facebook Groups Are Racking Up Followers
Modern dating culture is weird. With a plethora of dating apps on the market, building romantic connections can certainly be easier for young singles, but it also has its downsides—like learning through social media that the guy you’re interested in is seeing other people / isn’t being honest about their intentions. As young women navigate modern dating culture, Are We Sharing Boyfriends (AWSB) is a popular genre of Facebook group they’re joining to, well, see if anyone in their city is sharing their boyfriend. The group is city-specific: there are three Las Vegas groups that have over 11,000 members combined, while groups for Seattle, Bakersfield, California, and Philadelphia boast nearly 3,000 members each. A quick search on Facebook for “are we sharing boyfriends” also generates a healthy list of city-specific groups to join, with at least a couple hundred members each. Not only is admin approval required to join most of the groups, users must abide by rules like “No snitching and NO starting drama” in order to keep it a safe space. While this John Tucker Must Die-style group is helpful for young women to conduct their own research on their partner, whether they’re in a casual fling or it’s a newfound romance on the verge of getting more serious, it signals just how impossible modern dating culture can feel for young singles. Still, it’s a helpful resource and a way to build community with one’s local community. Savannah, a 23-year-old living in Philadelphia, joined her local AWSB group after finding it through another community-based online chat and used it to conduct a quick vibe check on the guy she had been in a “situationship” with for six months after spotting a few red flags. After posting pictures of the guy on the page explaining, “Hey, here’s this guy I’m exclusive with, he says he has no socials, but I’m not buying it,” she eventually got a hit on the post from a girl who knew the guy because he was her best friend’s boyfriend of three-and-a-half years. Not only did Savannah benefit from getting answers about her new boo, the girl who commented alerted her best friend to call out her boyfriend. YPulse’s Clicking on Community trend research found that 60% of young consumers are a part of an online group, with Facebook being the most popular platform for online groups among Millennials. Though AWSB is an incredibly niche group for young singles, it signals once again how young people are finding community online. 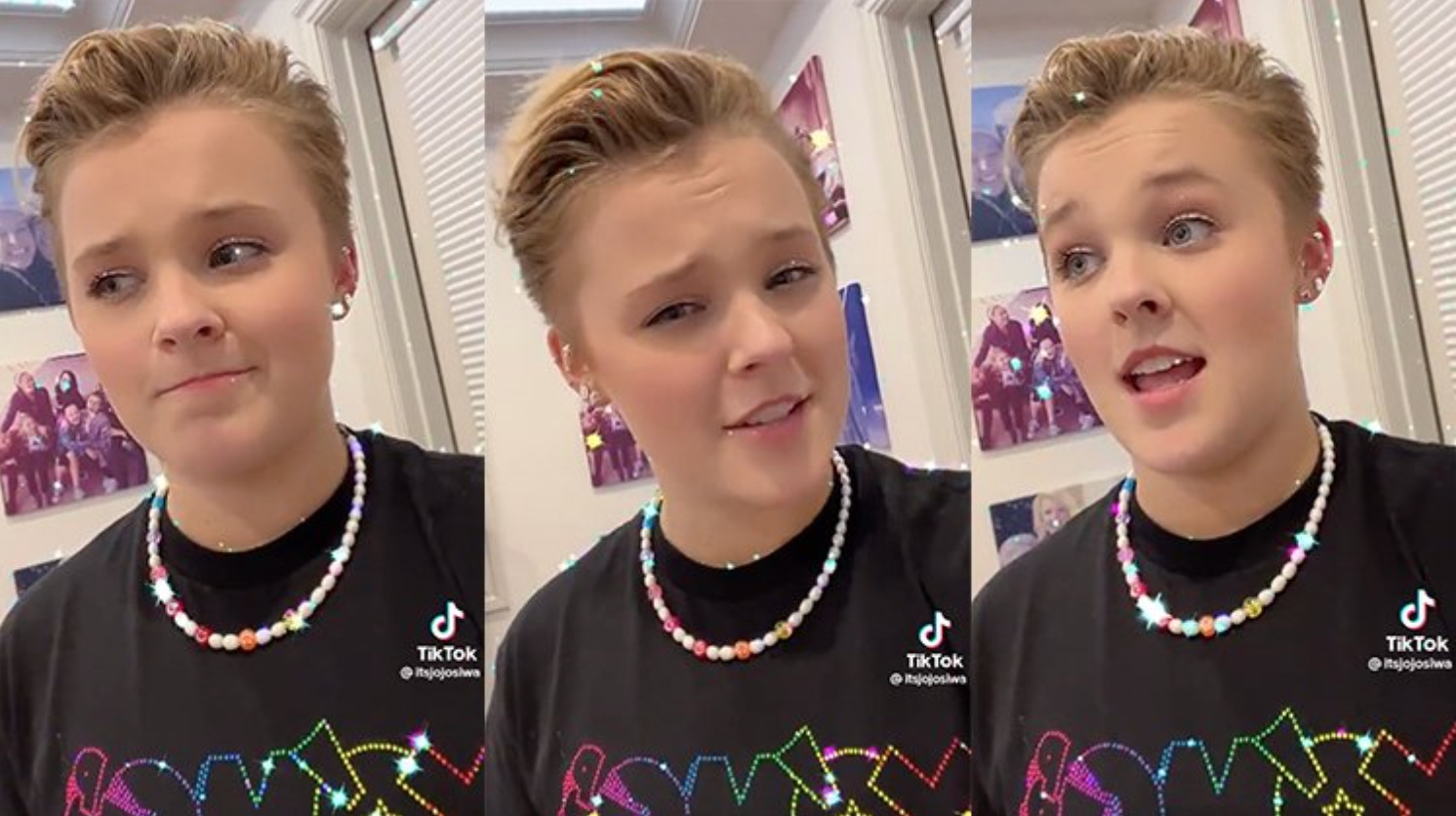 Links We’re Passing
JoJo Siwa announced to fans that she was excluded from Nickelodeon’s Kids’ Choice Awards despite being nominated, with Siwa and fans wondering if it had to do with the star’s queer identity.

This Netflix show about toddlers running errands is gaining a following for obvious reasons (it’s a must watch for a daily dose of cute content).

Bridgerton season two has become Netflix’s third most popular season for an English language show in just a little over two weeks since premiering.