MeUndies Addressed Its Controversial NFT on The Viral List

MeUndies responded to customer backlash about its NFT, a Reading Rainbow TikTok filter is bringing Gen Z and Millennials back to their childhood, the night luxe aesthetic is putting a (much needed) spin on the idea of wellness, two Harvard students built a website to help Ukrainian refugees—plus more internet buzz on this week’s Viral List!

YPulse told you about the wave of customer backlash MeUndies experienced after announcing it was joining the Bored Ape Yacht Club (in case you need a refresher: consumers were calling out how its NFT plans go against the brand’s sustainability efforts / claims). After staying silent and quietly removing mentions of the NFT on Twitter, the brand is opening up about its initial intentions and revised plans. On March 10, the brand posted a statement titled “An Update on Our NFT…” on the MeUndies subreddit. It explained that the intention behind joining the Bored Ape Yacht Club (BAYC) was to turn the image into a print for its underwear as “BAYC had the distinction of being one of the few collections of NFTs that could be licensed to make that possible.” MeUndies also took responsibility about not conducting any research on the environmental impacts of NFTs, and has since consulted with Watershed—a corporate climate advisor—for recommendations on how to move forward. Now, it’s scrapped plans to use the NFT image as an undies print, but will continue to sell its NFT, directing all of the money from its sale to the brand’s environmental work. A handful of users involved in the MeUndies’ Reddit community responded, noting they’re pleased the company is addressing the issue but the damage has unfortunately already been done as they failed to research the environmental impacts of NFTs before jumping on the hype. The comments section of MeUndies’ statement also documents mixed feelings from customers who are both “relieved” and “not-fully-convinced.” As the NFT space continues growing, it’s important to remember that although some young consumers are interested in them, there’s still a large community that remains skeptical of the cryptocurrency for both monetary and environmental reasons. Our sustainability research shows young consumers want brands in on the climate change conversation, while 78% say corporations should take more responsibility for fighting climate change.” MeUndies’ misstep is an example of why NFTs aren’t for every brand, and how brands can take action for their mistakes when they’ve done wrong, which is something Gen Z and Millennials appreciate. 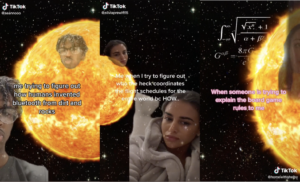 Reading Rainbow Is The New Star of TikTok

“Butterfly in the sky, I can go twice as high / Take a look, it’s in a book, a Reading Rainbow,” is the sound of this massively popular TikTok trend. More than 230K videos have been set to the theme song as users wonder about the world’s mysteries and pair it with the Reading Rainbow filter, which lets them record their heads floating through outer space. TikTokers are using the trend to poke fun at their own WTF moments, like “who the heck coordinates the flight schedules for the entire world” or “when someone is trying to explain the board game rules to me.” The majority of these videos clock in at 10-15 seconds and take various forms as people poke fun at the things they A) wonder about or B) mysterious experiences they’ve had. Reading Rainbow recently got a reboot that premiered on livestream and interactive platform, Looped. The PBS series played an influential role in Gen Z and Millennials’ childhoods as it helped them lay the foundation for learning about the world through books, and this trend signals how Reading Rainbow continues to live on in their lives–in a new way. 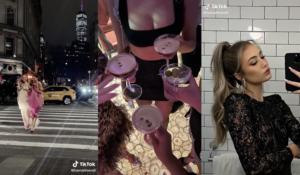 In recent years, a dominant aesthetic / trend on social media has been all about wellness. Whether it’s sharing a post-yoga workout selfie, a photo of a matcha latte, or a vlog about one’s morning routine, this wellness aesthetic has been wildly popular among Gen Z and Millennial Instagram and TikTok users as they share how they’re living out their best lives. Now, the “night luxe” aesthetic is offering a fresh take on what wellness looks like. In contrast to the “That Girl” trend, where images and clips about elaborate skincare routines, green juices, and Lululemon ‘fits are the pinnacle of wellness, the night luxe aesthetic is the counter trend where indulgence and glam can also be a form of self-care. Matcha lattes have been swapped for espresso martinis. Instead of green juices in the morning, it’s a glass of red wine in a bubble bath in the evening. Morning routine vlogs are swapped for clips documenting a night out with friends. This “roaring 20s”-style aesthetic not only challenges the idea of perfectionism that exists within popular trends like “That Girl;” it allows social media users to find beauty in the candid, unfiltered moments of their lives. “Everyone’s pulling down the exposure” on their Instagram and TikTok content as Sabrina Sadeghian (the 24-year-old co-founder of 4AM Skin) tells Glossy. “Everyone’s seeing these blurry photos with the girl and the chandelier and the martini.” Just like any other trend / aesthetic, cool girl influencers like Hannah Harrell, Jourdan Sloane are driving it, along with European influencers like French model Mara LaFontan and Shea Marie. Meme accounts and brands have picked up on the night luxe aesthetic, too. Elite Satire posted a “starter pack” collage for people wanting to get in on the trend, complete with images of espresso martinis, a black puffer coat, and a black designer bag, while lifestyle brand Flamingo Estate “emphasizes the idea of indulgence rather than self-control.”  As Sadeghian puts it, “Wellness has become really performative, in that it’s not actually working for everyone, and it can become more stressful, in a way. There’s a general consensus now, where a lot of people are viewing the ‘that girl’ thing as just a performance on TikTok. Going out, for me, is my de-stressor. I can laugh, I can have fun, I can dance—and that is my self-care.”

Harvard students Avi Schiffman and Marco Burstein created an independent site, ukrainetakeshelter.com, in just three days, which connects Ukrainian refugees with potential hosts who have available housing. The website is in 12 languages, and hosts can register their available space within the click of a button. From there, users can type in their current city to generate a list of free shelter options—whether that’s via an apartment, unused resorts, or someone’s home. According to Ukraine Take Shelter, the site was developed to encourage people with spare space to post a listing and offer it to Ukrainian refugees, while providing a direct, easy to access platform to help people amid Russia’s invasion of Ukraine. YPulse told you how young people have been learning about the war via expert-backed knowledge on TikTok and videos from Ukrainian teens documenting the devastation from their POV. Our causes, charity, and activism research also shows 94% of young people are passionate about a social cause, primarily because they believe ignoring social issues is dangerous to the world and they feel sympathy to those affected, and the ongoing war in Ukraine is certainly something they’re speaking out against and donating their money to.

A cleaning hack known as the #FlyLadyMethod has racked up  more than 65M views on TikTok.

Health startups including Done and Cerebral are sparking concern from medical professionals for their persistent ads about ADHD medication.

Karen Fukuhara (The Boys and Suicide Squad actress) is opening up about a recent hate crime she experienced, demanding anti-Asian hate crimes to stop.

Gabrielle Union is calling out Disney for its handling of Florida’s “Don’t Say Gay Bill.”

The Batman will be available on HBO Max in late April.

Ryan Reynolds’ The Adam Project rose to the top of Netflix’s top 10 list while clocking in the third-best debut week for a Netflix movie.

Meanwhile, Stephanie Beatriz (who voices Mirabel in Disney’s Encanto) opened up about how her character’s bisexual background is on “her own Disney-approved path,” sharing how Mirabel’s experiences are different from some queer experiences.

Dolly Parton opted out of being inducted into the Rock & Roll Hall of Fame, citing the nomination as inspiration for her to record an official rock ‘n’ roll album.