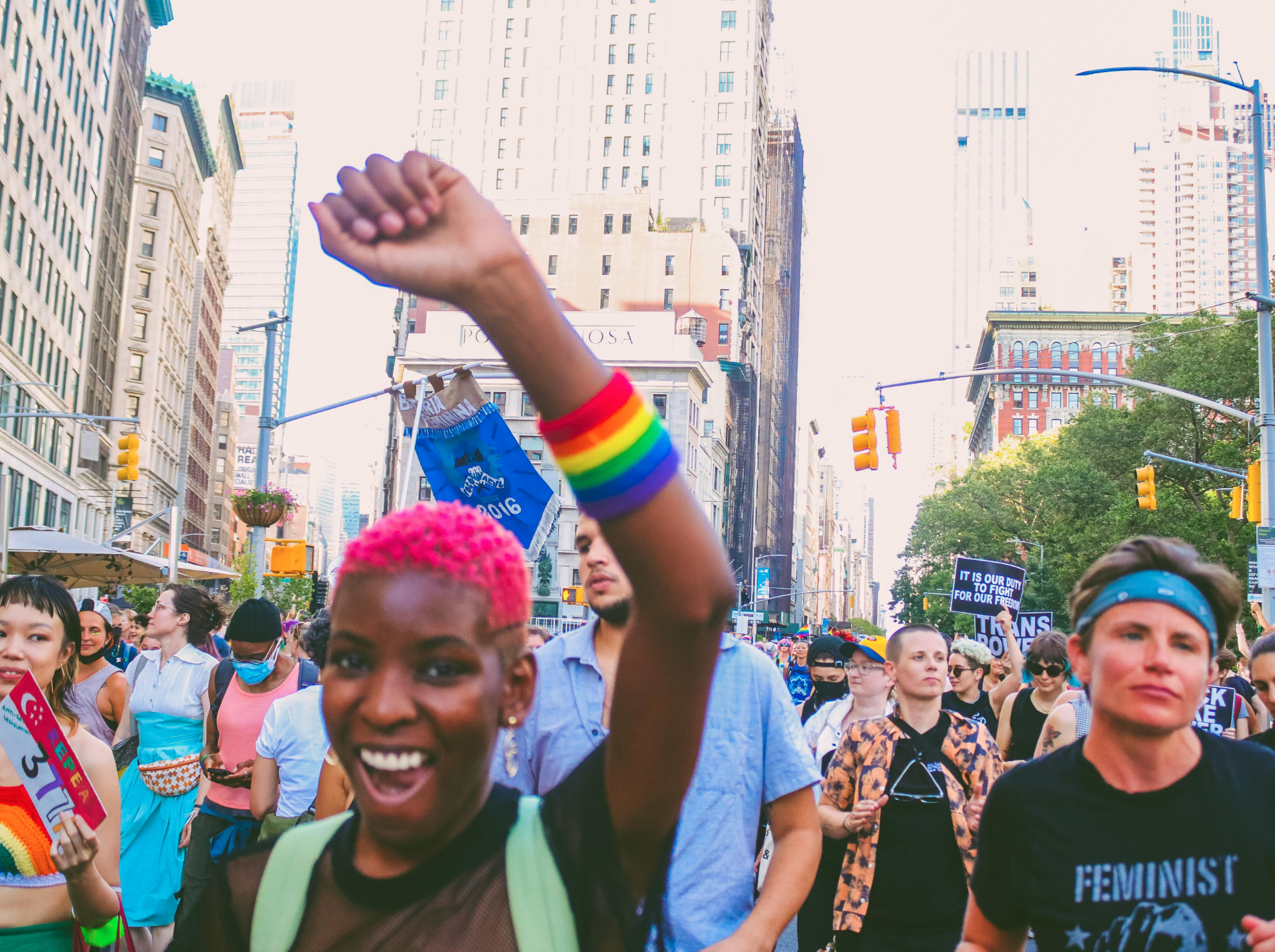 YPulse research shows that the number of young people who identify as LGBTQ+ has increased, and we’re digging into why… 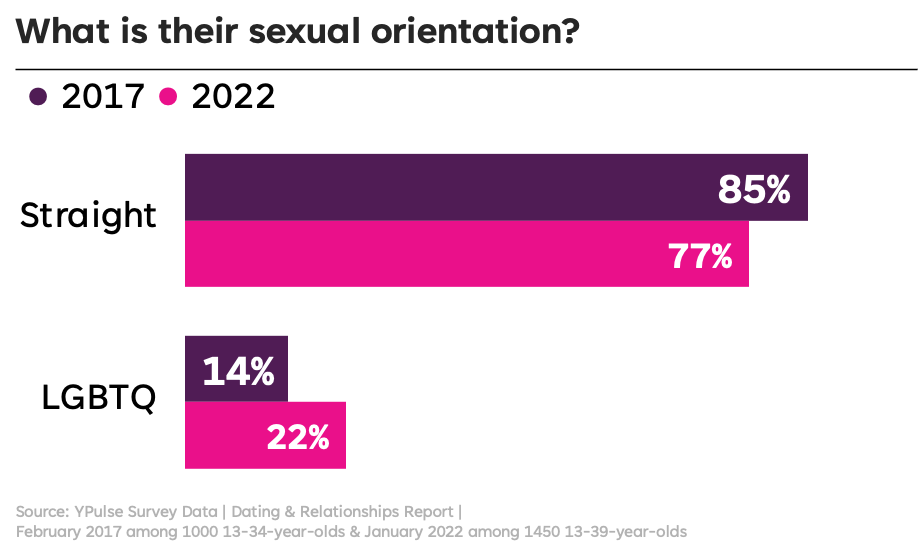 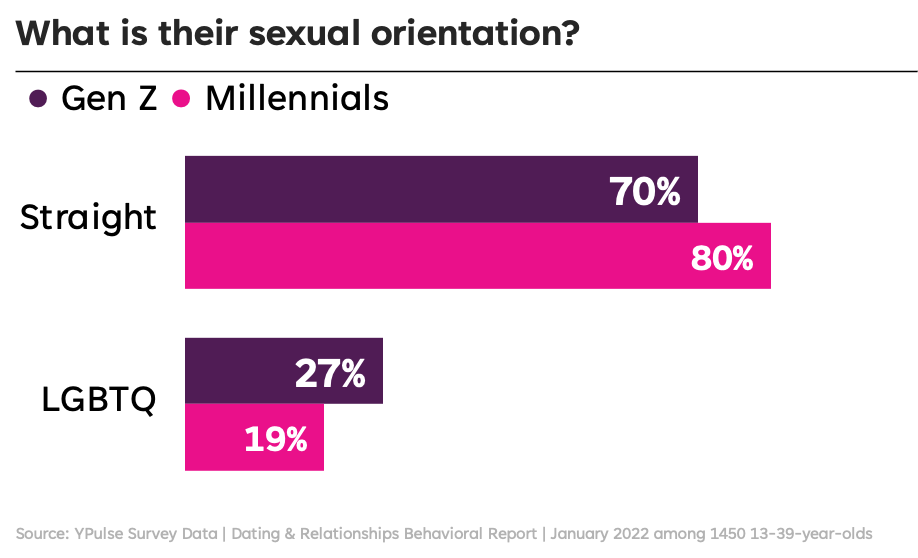 Gen Z is more likely than Millennials to identify as LGBTQ+

YPulse’s recent dating and relationship survey shows that 27% of 13-20-year-olds identify as LGBTQ today compared to 19% of 21-39-year-olds. Gen Z is more open than previous generations about their gender identity and sexuality, and they’re challenging traditional gender norms in an effort to create a more inclusive future for all. Additionally, our data also shows that 57% of Gen Z agree “Most people’s sexual orientation falls somewhere in between straight or gay,” and they more likely than Millennials to disagree with the statement, “You are either straight or gay, there is no in-between.”

Understanding the importance of the LGBTQ+ community for this generation is vital, but the reasons behind the shift may be just as important—especially where brands are concerned. Relying on stereotypes is the best way to get canceled, especially by a generation that values social efforts and representation. We’re here to provide some context on the generational shift into LGBTQ+ acceptance—and the factors at play. So, what are some of the things that have led to this generation feeling freer to live authentically?

Exposure to the stories and truths of other LGBTQ+ individuals and celebrities is one of the major reasons. Unlike previous generations, Gen Z is growing up on social media, with access to communities and content that normalizes LGBTQ+ representation. From Grindr having a TikTok account (no, really) to out-and-proud influencers stepping into the public eye, queer culture is easy to find on social platforms, where young consumers are facing less overall backlash for living as their authentic selves. Likely because of this, Gen Z stars like Lil Nas X and JoJo Siwa are setting a new precedent by coming out publicly at young ages—often via social media as well. As a result, young people—especially teens—feel more comfortable and more accepted when it comes to coming out themselves.

But it’s not just representation that has led to the shift we’re seeing. In a short period of time, a myriad of circumstances came together to create an environment in which young people could explore their genders and sexualities, including the COVID-19 pandemic.

The crisis hit at a very formative time in Gen Z’s development—within two weeks, these young people went from their daily routines, in-person communities and standard way of living to being forced to navigate life inside a bubble. In that time, many turned inwards to self-explore and reflect, which, in some cases, led to identifying as genders and sexualities different to the ones they entered the pandemic with. In fact, YPulse’s The In-Between trend research found that 12% of 13-39-year-olds say their sexual orientation or gender identity changed during COVID. That number increases to 16% among Gen Z, and 19% among Gen Z females. This time for introspection and reflection was also a period of increased time online, where young people could look for confirmation and validation for their feelings. Just one example: Google trends shows that searches for “Am I Gay Quiz” have increased significantly over the last two years.

Quarantines also likely provided more time to engage with online communities that helped them to explore their identities as well. On TikTok—which, by nature of its unique algorithm, allows regular users to go viral and reach their peers—the community of Gen Z and Millennials has its own (informal) name: #GayTok, which has a whopping 3.7B views. In fact, the app has become a safe space for young LGBTQ and non-binary users to explore their sexuality. LGBTQ influencer houses have been popular on the platform, while Millennial queer families have also formed “TikTok families” to help LGBTQ youth feel safe and accepted. Mafia Moms, Angelic Goddess Dads, and Supermagical Aunties who all collectively have millions of followers—are among some of the popular accounts who provide an outlet for young users who “don’t have the at-home structure they need or desire” and reaffirm their sexuality, gender identity, or even their dyed hair.

Understanding Gen Z’s LGBTQ+ identities is a must for brands

We told you last year that supporting LGBTQ+ is vital in reaching Gen Z, and our recent Causes/Charity & Activism behavioral research found that Gen Z is more likely than Millennials to say LGBTQ+ discrimination / rights is a cause they’re passionate about, and far more likely to say it’s a cause they want brands to be involved in. The fact that this generation is so much more likely to consider themselves a part of the LGBTQ+ community is the clear driver of this difference. Understanding the whys behind this, and the importance of communities and representation in their journeys, could help brands to more authentically connect with and support them.

Western Europe
These Are Young Europeans’ Top 15 Hobbies Right Now
Hobbies are a source of community for Gen Z and Millennials. Here are the ones they...
North America
7 Ways Brands Are Authentically Supporting LGBTQ+ Youth—Beyond Advertising
From podcasts to inclusive social media campaigns, here’s seven brands supporting L...
North America
How P&G Is Supporting Gen Z Women in STEM
The entrepreneurial arm of this consumer goods brand teamed up with Her Campus Medi...