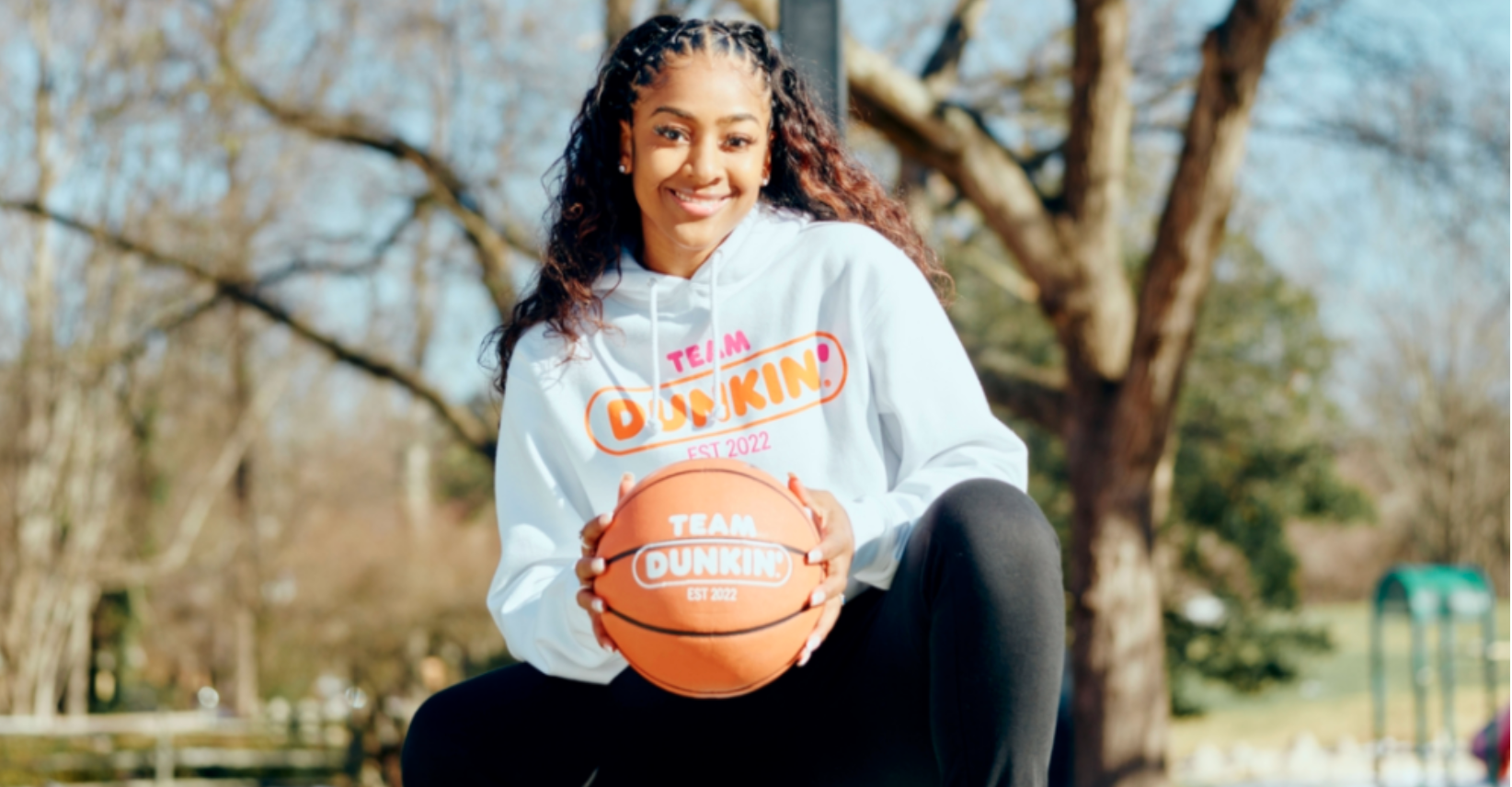 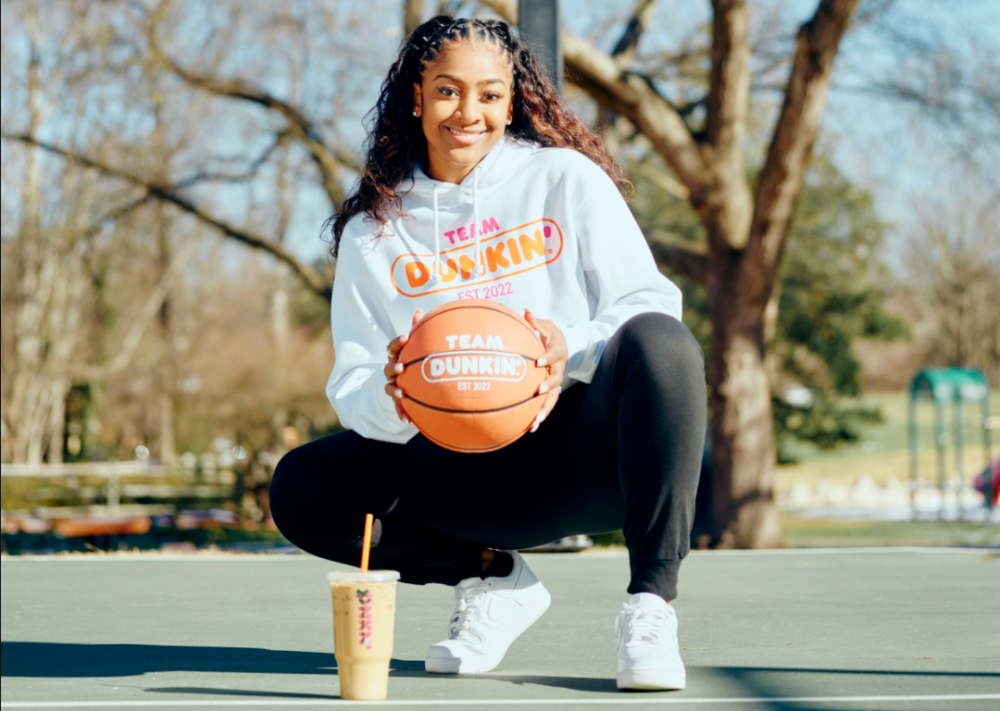 Following the NCAA’s decision that students could profit from their name, image and likeness (NIL), these six brands jumped at the chance to work with college athletes…

For decades, coaches and college athletes have pushed for the NCAA to let young athletes be compensated for their name, image and likeness (NIL) so they can get paid while in school, where institutions have been profiting off the fame young athletes haven’t been able to. Last year, the association finally approved a change in policy that allows all college athletes to profit from their NIL meaning young players can now profit from autographs, social media posts and commercials. And young people clearly support the decision: A recent Marist Poll survey found that the majority of 18-29-year-olds believe colleges should pay their athletes. However, the NCAA just announced they would be reviewing the NIL policies to see whether they have affected athletes’ school choice, transfer opportunities, academics and their mental health—so it’s still unclear how much of an impact that will have. YPulse’s Scouting Next Gen Sports Fans trend data shows 63% of 13-39-year-olds consider themselves sports fans, and partnering with young athletes could be a huge opportunity for brands to authentically engage with them.

Almost immediately after the NCAA updated their NIL policy, companies debuted ways to help student athletes find sponsorship opportunities. Online freelance marketplace Fiverr launched a mentorship program to help college football players navigate NIL deals by pairing them up with NFL players who played at their respective schools and learn about endorsements, sponsorships, and appearance fees. NIL management platform INFLCR inked a three-year partnership with TikTok to educate young athletes about best practices for video creation. Cameo has also let college athletes join the platform to set their own rates, and hundreds are already on the paid content site. YPulse’s sports and athletics research also shows that athletes are the top types of celebrity that young people like to see as spokespeople for brands, and in the last year, college athletes have become the new marketing mainstays. PetSmart and Boost Mobile were some of the first companies to sign deals with student athletes following the NCAA’s ruling, with the cell phone company initially signing deals with twin basketball stars Hanna and Haley Cavinder before adding hundreds of NCAA athletes to their roster. Here are six more brands that have taken the leap into college athlete marketing:

Dollar Shave Club’s “Noticeably Smooth” Campaign
The Unilever-owned brand was named the official razor of the NACC and March Madness, which kicked off this weekend. Ahead of the games, the brand signed a NIL deal with Gonzaga University star Drew Timme for its “Noticeably Smooth” campaign, dubbing him the first and only “chin-fluencer” (due to his smooth chin that he has because of a handlebar mustache, of course). The smooth-chined basketball player went viral during last year’s March Madness when fans pointed out his prominent handlebar mustache on social media—and clearly, Dollar Shave Club noticed too. The campaign will feature “Mafia” spots (starring fictional members of the mob gently slapping and caressing each other’s “noticeably smooth” faces) that will air during the March Madness games, and a sweepstakes on Instagram and Twitter this week, asking users to share a photo of their smooth chins for a chance to win tickets to the Men’s Final Four. When asked about his partnership with Dollar Shave Club, Timme told Yahoo! Finance: “One of the nice things about partnering with Dollar Shave Club is they’re like: ‘Just be you. Just do whatever’s comfortable with you. And, you know, being a Chin-fluencer, you know, we want you to be authentic in your true self.’” 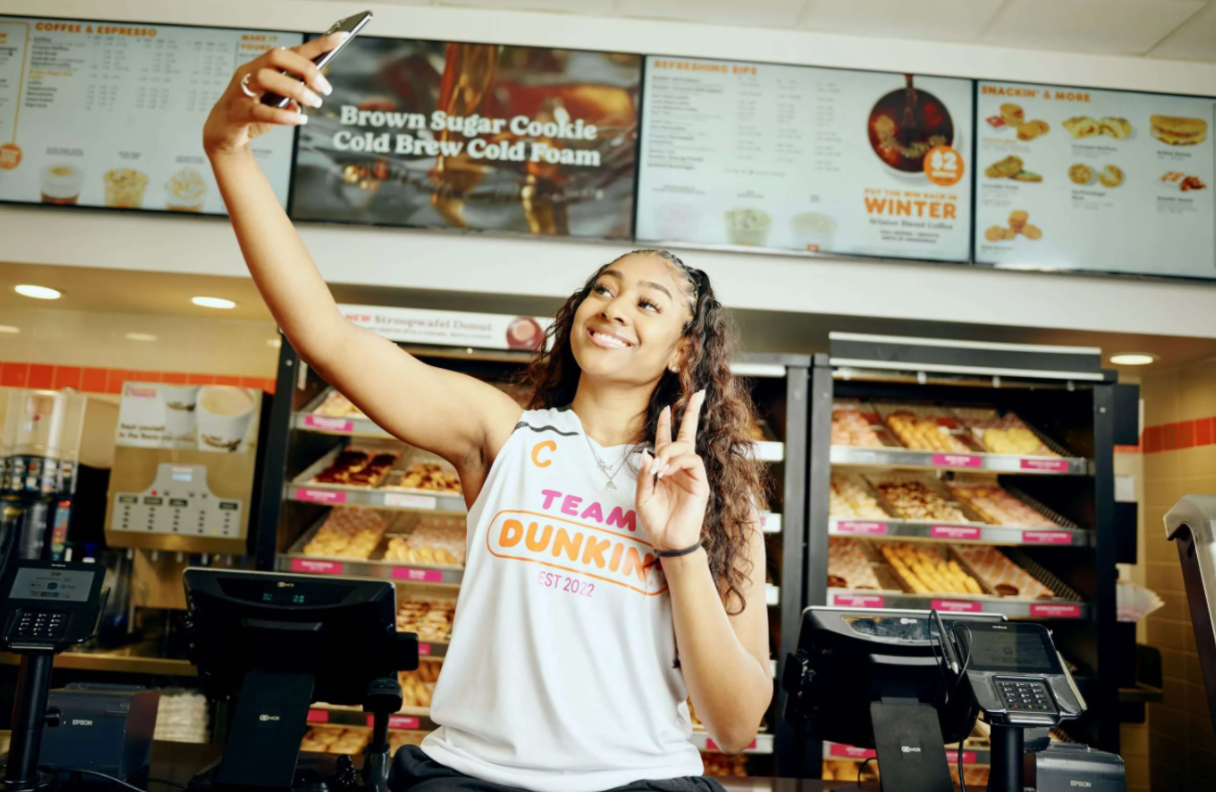 Dunkin’s Team Dunkin’
Dunkin’ has had its share of celebrity and influencer partnerships, collaborating with everyone from Snoop Dogg to TikTok star Charli D’Amelio. Now, they’re teaming up with star college athletes. In February, the donut and coffee chain signed deals with Deja Kelly and Matthew Boling, making them the founding members of Team Dunkin’. Kelly is the point guard of the University of North Carolina women’s basketball team, while Boling is a track and field athlete specializing in sprints and long jump. This marks Dunkin’s first NIL partnership—and according to the company, Team Dunkin’ will recruit new “teammates” throughout the year. The brand’s mission is to support athletes on and off the field, energize a growing roster of students through wins, losses, and “the daily grind of being a college athlete.” For the initiative, Kelly and Boling will share their experiences across social media while wearing exclusive Team Dunkin’ merch. Athletes on the Team Dunkin’ team will receive their own drink and food specials, which customers can purchase at participating Dunkin’ locations in the athlete’s respective college towns. Kelly’s drink featured a large cold brew with sweet cold foam, french vanilla swirl, whole milk, and sugar with less ice, while Boling’s included a small iced coffee, a Veggie Egg Wake-Up Wrap, and glazed Munchkins donut holes. The brand also donated $5,000 to the Velle Cares Foundation in association with the “Single Mothers Saulute” annual event, a cause which is important to Kelly. 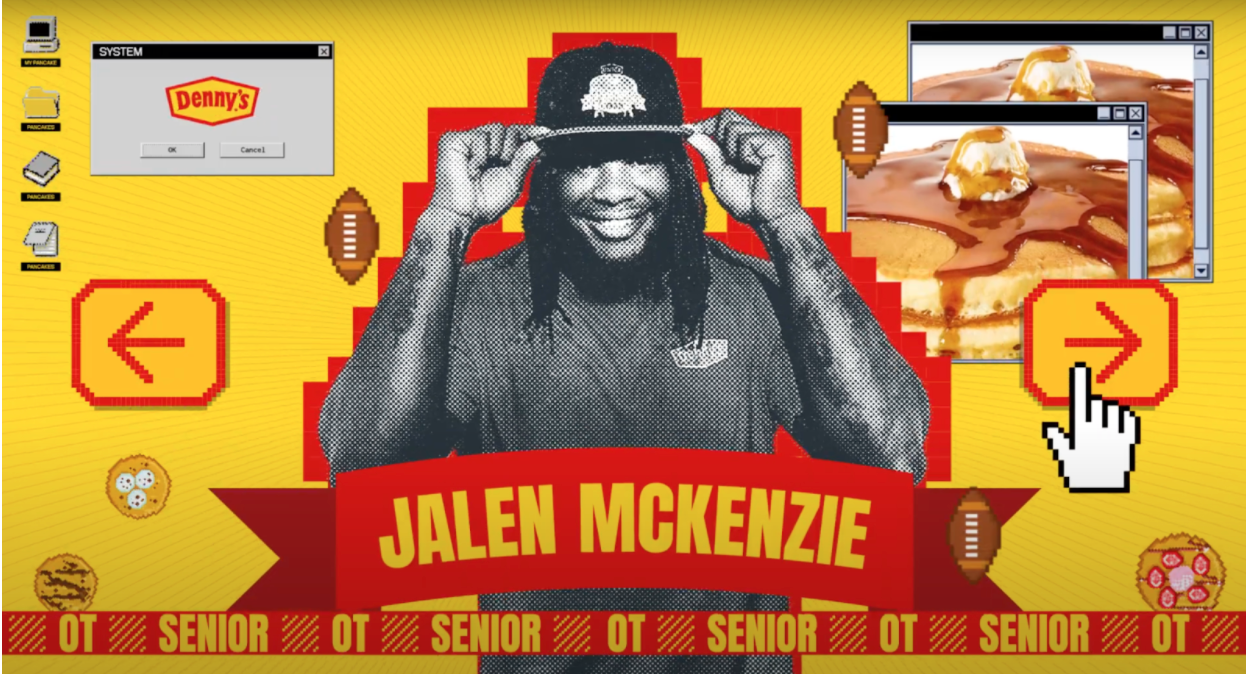 Denny’s All-Pancaker Team
Last fall, Denny’s signed four college football offensive linemen to NIL deals to create The All-Pancaker Team, which includes the University of Southern California’s Jalen McKenzie, University of Arkansas at Pine Bluff’s Mark Evans II, Ohio State University’s Nicholas Petit-Frere and Clemson’s Tristan Leigh. All of them are getting paid in unlimited buttermilk pancakes, and as members of Denny’s new team, the athletes will be participating in brand initiatives, star in Signing Day videos, and post content across the brand’s and their personal social media accounts. The decision to create pancaker team comes from the football term “pancake block,” which leaves a defensive player “flat on his back.” Meanwhile, Denny’s brought back its Super Slam breakfast in January by signing a separate NIL deal with Stanford University basketball player Fran Belibi, one of the eight women who have slam dunked in a college game. The brand donated $25,000 in Behlibi’s name to the Women’s Sports Foundation. Denny’s executive VP and chief brand officer John Dillon said in a statement: “Given how much all college institutions contribute equally to the beautifully diverse fabric of this country and the activities we enjoy together, it was important to us to bring together a group of athletes representing both Power Five and HBCU schools.” 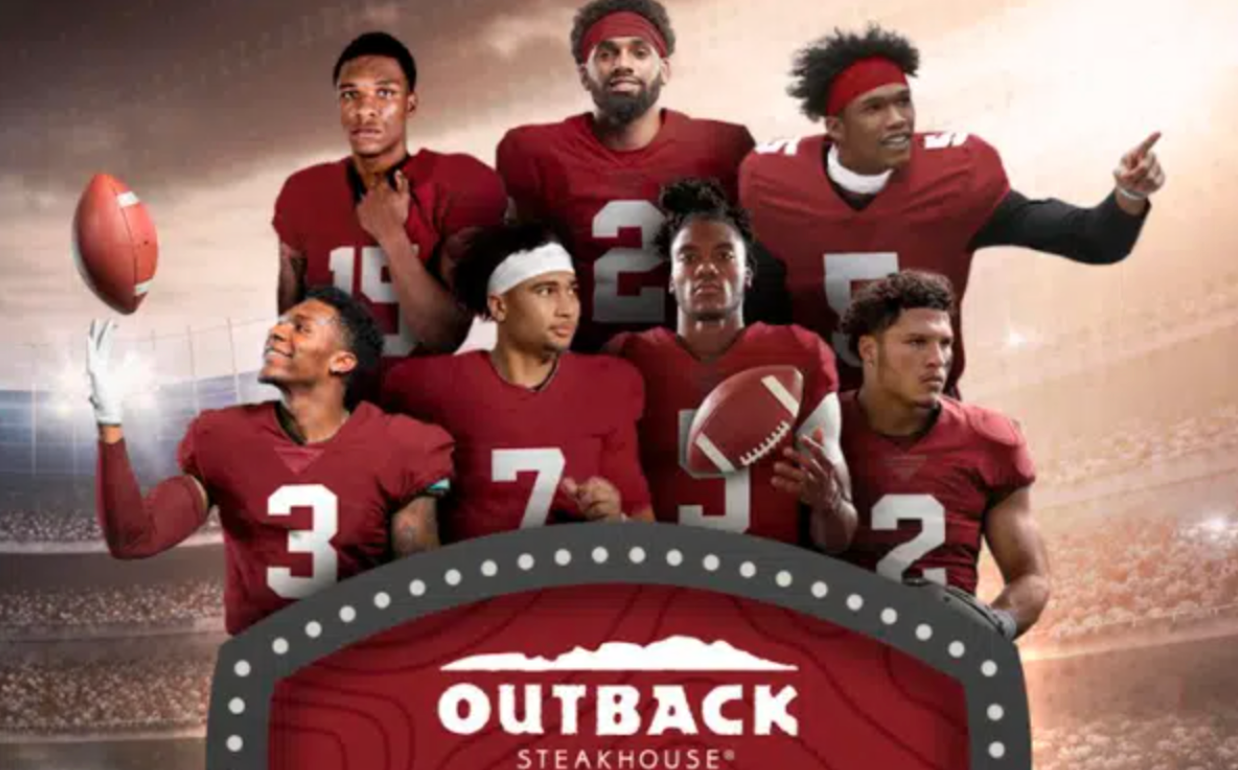 Outback Steakhouse’s TeamMATES Program
During the college football season, Outback Steakhouse debuted a TeamMATES Program, which celebrates “all the good that comes with being a teammate in sports and in the community.” The restaurant chain signed seven college football athletes / “teammates” including Ohio State University quarterback CJ Stroud and wide receivers Chris Olave and Garrett Wilson, University of Michigan wide receiver AJ Henning and running back Black Corum, and University of Florida quarterbacks Emory Jones and Anthony Richardson. To kick off the initiative, the roster of athletes gave back to their respective communities by raising money for their favorite charities. The restaurant also offered special promo and discount codes to students in the teammates’ college towns. According to Outback Steakhouse president, Brett Patterson: “College football Saturdays are filled with excitement and the connections people make at tailgates, in stadiums, and at our restaurants. We are excited to partner with our inaugural class of athletes to continue to forge those moments along with memories for our athletes and our communities.” And according to the company, they want to continue building the TeamMATES program with more male and female college athletes during the upcoming winter and spring sports seasons. 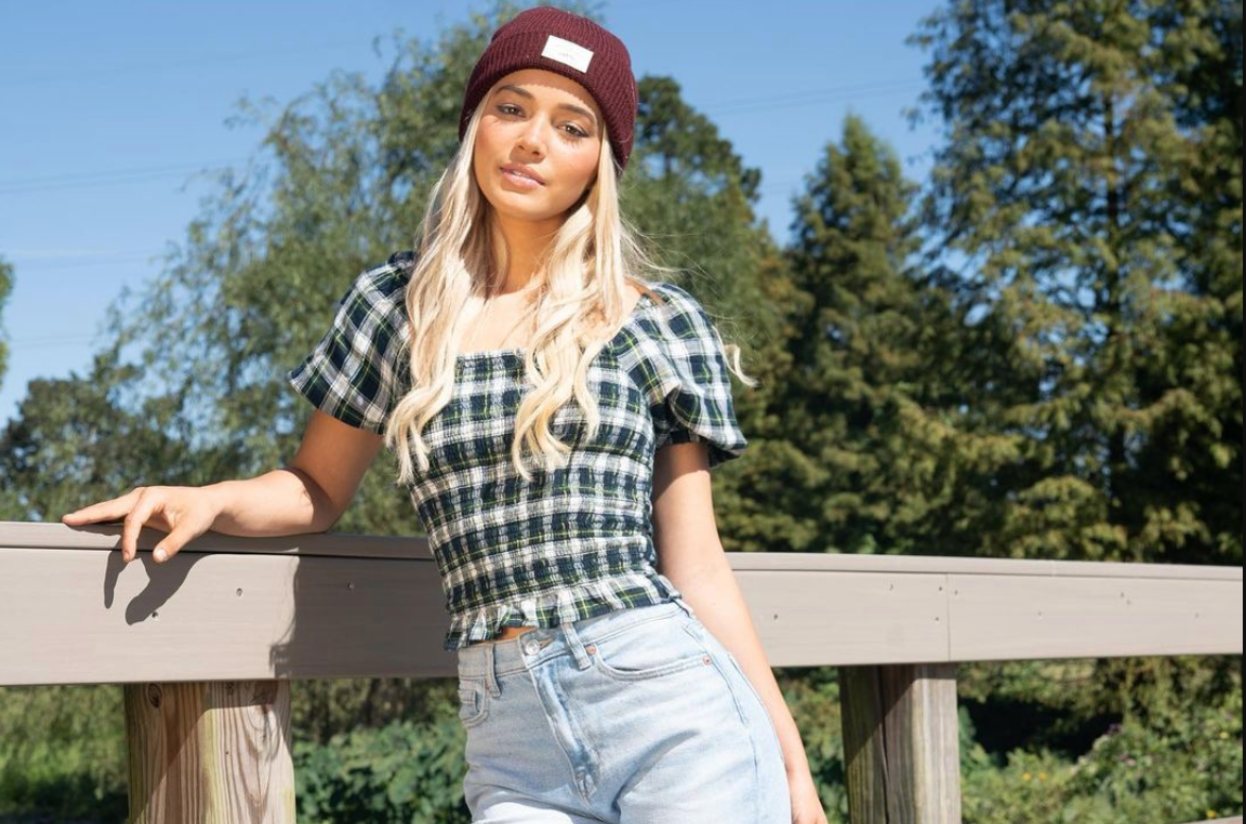 American Eagle’s #AEAthleticDept Program
After receiving direct messages from student athletes vocalizing their interest in partnering with American Eagle, the clothing brand began working on a new influencer program exclusively composed of student athletes. The #AEAthleticDept program debuted in the fall, just in time for football season. The company recruited University of Southern California quarterback Kedon Slovis, Auburn University running back Tank Bigsby, and Louisiana State University gymnast Olivia Dunne as the young sports stars in the program, and since then, they have developed content inspired their daily lives, which have appeared on American Eagle’s marketing channels, website, and blog. American Eagle CMO Craig Brommers told Adweek: “The ruling that brands could work with NCAA athletes was game-changing. At AE, our core audience is age 15 to 25, and college is an important part of that demographic.” 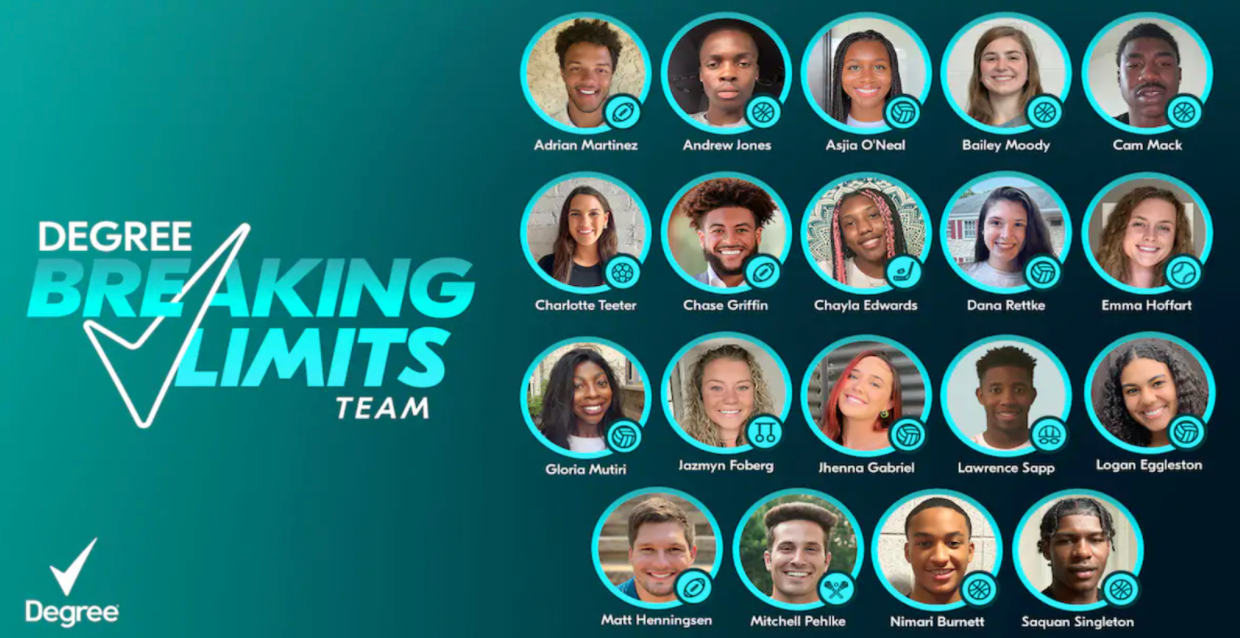 Degree’s #BreakingLimits Campaign
The Dollar Shave Club isn’t the only Unilever brand that has signed partnerships with college athletes. Soon after the NIL policy change, Degree launched the #BreakingLimits campaign, a purpose-led approach for its NIL program aimed at “providing equal compensation to both men and women athletes.” A total of 19 student athletes–including representatives from para swimming, women’s volleyball, and wheelchair basketball–were recruited for Degree’s program, along with more college sports icons like the University of Cincinnati’s Lawrence Sapp, University of Texas’ Jhenna Gabriel, and University of Alabama’s Bailey Moody. Degree’s partnership helped them tell their unique stories—rather than focusing on the athlete’s popular social media presence and large followings—and Unilever’s VP of media and engagement notes how Degree’s NIL opportunity is focused on creating a more socially inclusive world. #BreakingLimits also placed a strong emphasis on mentorship and community engagement in sports, and the brand is investing $5 million over the next five years in activities that inspire people to be more active. And just in time for the March Madness women’s tournament, Degree launched the “Bracket Gap Challenge” as an extension of its #BreakingLimits NIL program after finding only 12% of people filled out an NCAA Women’s tournament bracket last year—and since March Madness tends to largely focus on the men’s tournament each year. They teamed up with WNBA Candace Parker to encourage fans to fill out a women’s bracket. YPulse’s Sporting Next Gen Sports Fans trend research shows that young people want more diversity, inclusivity, and equality in sports, while gender equality / sexism has risen on the list of issues they’re passion about right now, and taking a purpose-led approach like Degree’s NIL program is a way for brands to support change in the industry. 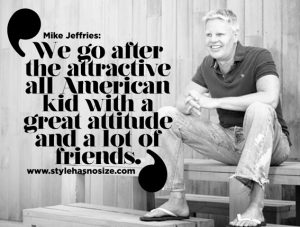 Scandal in the Age of...