Millennials are remembering Arthur as it wraps up its final season, a mom is going viral on TikTok for her hilarious clips about being an all-organic household, women on Instagram are calling out the detrimental effects of social media filters, Love Is Blind is back—plus more internet buzz on this week’s Viral List!

One of Millennials’ favorite childhood PBS series, Arthur, aired its final episode this week after 25 seasons. The episode was appropriately titled, “All Grown Up,” as it took a look at where the characters of Elwood City end up twenty years in the future: Arthur’s best friend Buster becomes a teacher; Muffy runs for mayor of Elwood; George manages the Super Bowl; Francine works for a sneaker company; Binky becomes a weatherperson; D.W. becomes a traffic cop (no surprise there); and fittingly, Arthur is an author, with viewers discovering he has written the graphic novel Arthur’s Eyes (the title of the first episode of the series, which premiered in 1996). And for the cherry on top, the original Arthur actor came back for the final episode to voice adult Arthur. Fans are reacting to the Arthur finale on Twitter, sharing how “emotionally wrecked” they are after finding out the fate of each beloved character. One Twitter user sums it up perfectly: “I grew up with this show for so long and to see them all grown up with successful careers makes me feel a sense of pride.” Luckily, PBS has a slate of digital spinoffs planned to keep the beloved PBS series around for future generations. The final episode of Arthur once again proves how real Millennial nostalgia can be, and this gen will take any chance they get to vicariously live through their favorite childhood characters and toys—no matter how old they get. YPulse’s Pop Culture Redefined trend research shows the finale of a popular TV show is a top pop culture moment young people care about, and the Arthur finale proves it doesn’t matter how old a show is, young people will still rally together to talk about their favorite childhood memories online. 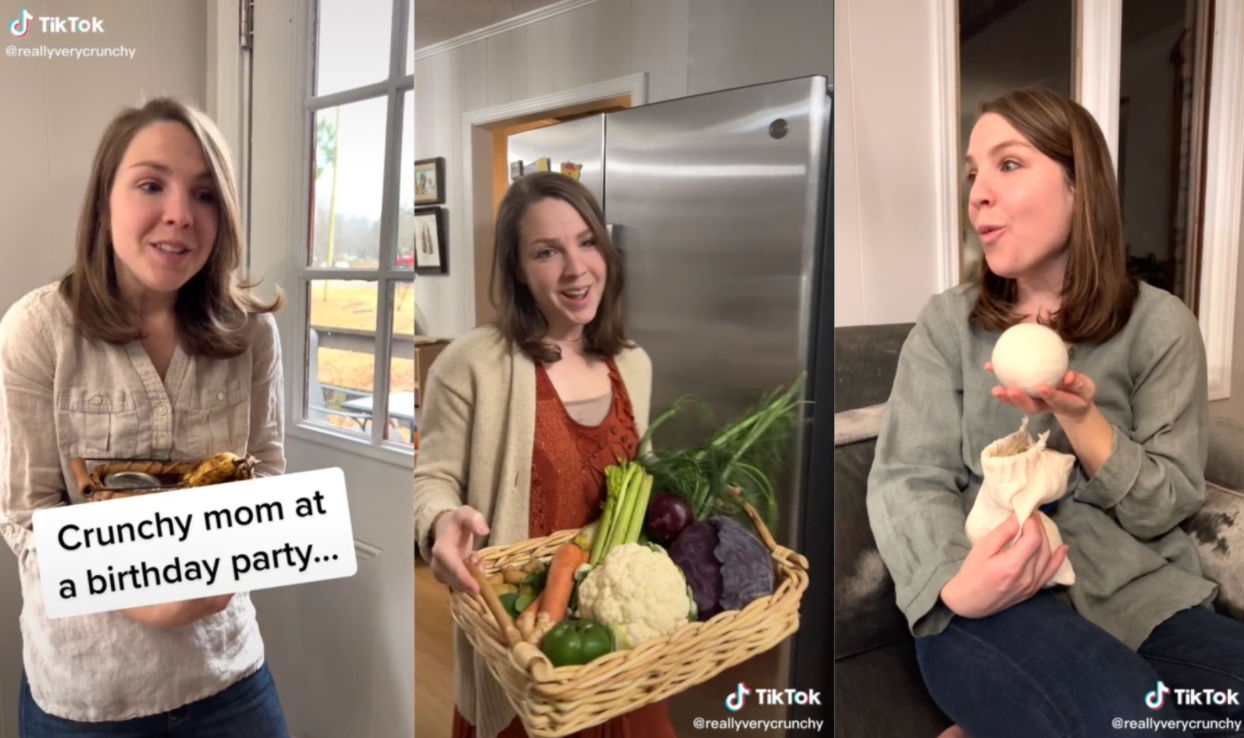 A “Crunchy Mom” Is Racking Up Views on TikTok

Since January, @ReallyVeryCrunchy, which currently has over 400K followers, has been going viral on TikTok for sharing videos that poke fun at hyper-organic and wellness-focused, or “crunchy” parenting. The term “crunchy parent” is often associated with parents who are “dedicated to organic, holistic, all-natural everything for their kids.” Videos on the account showcase “crunchy” behavior like bringing bananas to a kid’s party so her children won’t eat the cake, and “crunching-off” with another crunchy mom. She also talks about highly specific things that only fellow “crunchy” moms would understand, name-dropping products / ingredients like the antibacterial properties of manuka honey, fermented cod liver oil, wool balls as toys, sleeping in a “family bed,” the “1,000 hours outside” pledge, and more. The details and crunchy product accuracy had many users and followers speculating on whether her videos were parody or real, but 33-year-old Emily Morrow confirmed with BuzzFeed News that she is the woman behind the account and is, indeed, a crunchy mom herself–though clearly one that finds the humor in the lifestyle. As over the top as it may sound, Morrow confirmed with BuzzFeed News that her content is authentic, if tongue in cheek. Morrow gets how ridiculous her content is, explaining how her videos provide an equal dose of comedy and reality to touch on how “crunchy” moms often come off as pretentious. She gets how the “crunchy” parenting look is perceived, she just hopes some fellow “crunchy” moms out there can find pleasure in her content and maybe even relate a little. YPulse’s food shopping and trends research found that 40% of Millennial parents usually buy products from the organic / natural foods aisle when they go grocery shopping, showing that the “crunchy” lifestyle is something that some parents are aspiring to live. 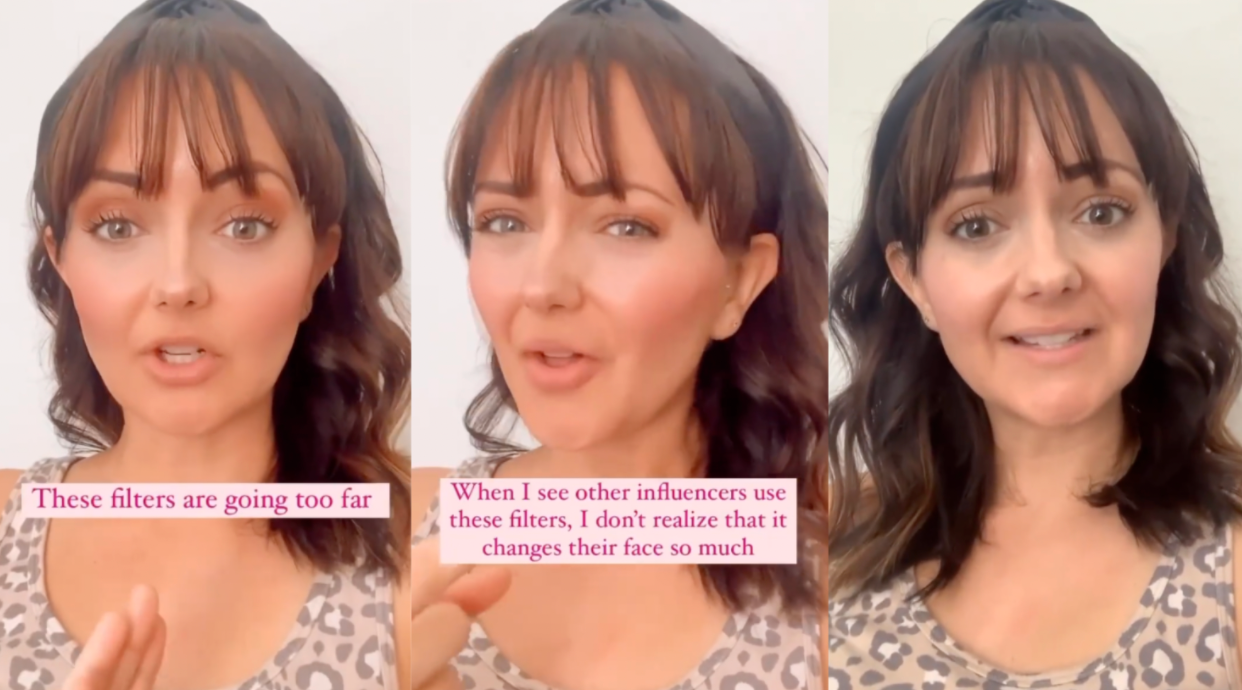 YPulse’s New Content Creators trend research found 46% of 13-39-year-olds have edited their physical appearance in a photo or video before posting it to social media. Young females are far more likely than males to have edited their appearance in a photo for social media, and it’s having a serious impact on how they see themselves. To put this in perspective, 56% of females say social media makes them feel bad about their appearance, while 63% say they wish they could look the way social media photo filters them look IRL. Young people have started talking about the detrimental effects of photo filters on social media, and one Instagram filter in particular is having a moment as users call out how it can be dangerously misleading. In an Instagram Reels video posted by @thefightforbeauty she says: “I am legitimately so confused because I saw a few people using this filter and I didn’t realize that they didn’t look like this. I just liked the colors so I thought ‘oh I’m going to use this,’ and then I put it on my face, and this is not my face.” She goes on to use other Instagram filters that have a similar beauty enhancing effect, explaining that it’s even more confusing and harmful when she sees other people using the filter because she thinks they actually look like the filter. Nearly 4K Instagram Reels videos have been made using @thefightforbeauty’s original audio, showing viewers how the filter makes them look versus their actual appearance. The filter matched with the audio has garnered significant attention because women are dispelling the myth that everyone on social media actually looks like how their pictures appear. One of the most-viewed videos using the audio puts it plainly, “this filter will mess you up.” As social media’s presence in young people’s lives grows, they’ve become more aware of how highly curated, stylized images / videos on social media can have a negative impact on their self-esteem, but having that awareness doesn’t necessarily make it easier to deal with. For brands, it’s important to be mindful about the images that are being shared and to be transparent about the amount of touching up it takes to look a certain way on social media. Celebrating people’s natural appearances and normalizing that everyone has aspects of their body that they’re insecure about are two ways brands—and people in general—can bring more support to this issue. 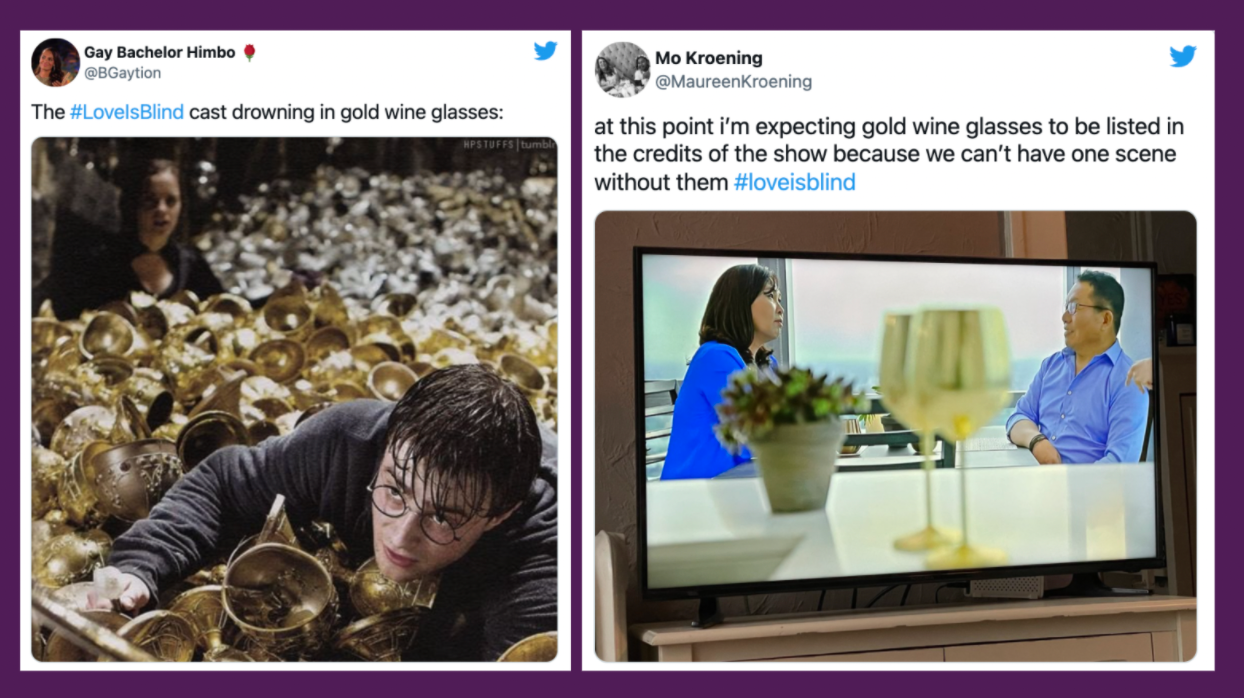 Rewind to the early days of the pandemic, Love Is Blind is the hottest new reality dating show on Netflix. Didn’t participate in that quarantine guilty pleasure? The show follows contestants as they form connections with each other without ever seeing them, leaving it up to conversations behind closed doors inside their personal pods to fall in love. And if they do find love, they get to meet in person, and the rest of the show documents their lives after the pod as they travel, plan their wedding, and more. The show is equally bingeable as it is memeable, and now that season two is underway fans can’t get enough of the new contestants’ journey to find love. #LoveIsBlind is taking over Twitter as users meme about the contestants, while TikTokers are recreating scenes from the show via #LoveIsBlind. But one thing in particular that has caught viewers’ attention this season is the ominous gold wine glasses that seem to follow the characters everywhere they go. Contestants drink their alcohol and coffee out of the gold wine goblets, and they’ve followed contestants everywhere—to their pods, outside of their pods, on their romantic getaways, they even get their own closeups, making everyone wonder what company is sponsoring them. The return of Love is Blind not only proves how long the pandemic has felt for young people (two seasons have dropped during the pandemic?!), it signals how Netflix continues to be Gen Z and Millennials’ go-to for must-watch TV.

Julia Fox saying “Uncut Gems” is all over TikTok.

A Spotify bot named Ashley has been adding songs to people’s collaborative playlists, and users aren’t happy (some have started making playlists with names like “Ashley stop adding songs to my playlists”).

After Kanye West announced that his new album would only be available to stream on his Stem Player, fans weren’t too impressed with the sound quality at the “Donda 2” listening event.

Maggie Rogers tweeted that her new album is “done.”

Netflix’s Inventing Anna topped You and The Witcher for most hours watched among an English-language series on the platform.

Paramount+ is reviving The Fairly OddParents in a new live-action series featuring grown up Timmy—as if Millennials needed another childhood show revival to swoon over.