What Causes Do Young Europeans Care About Most? 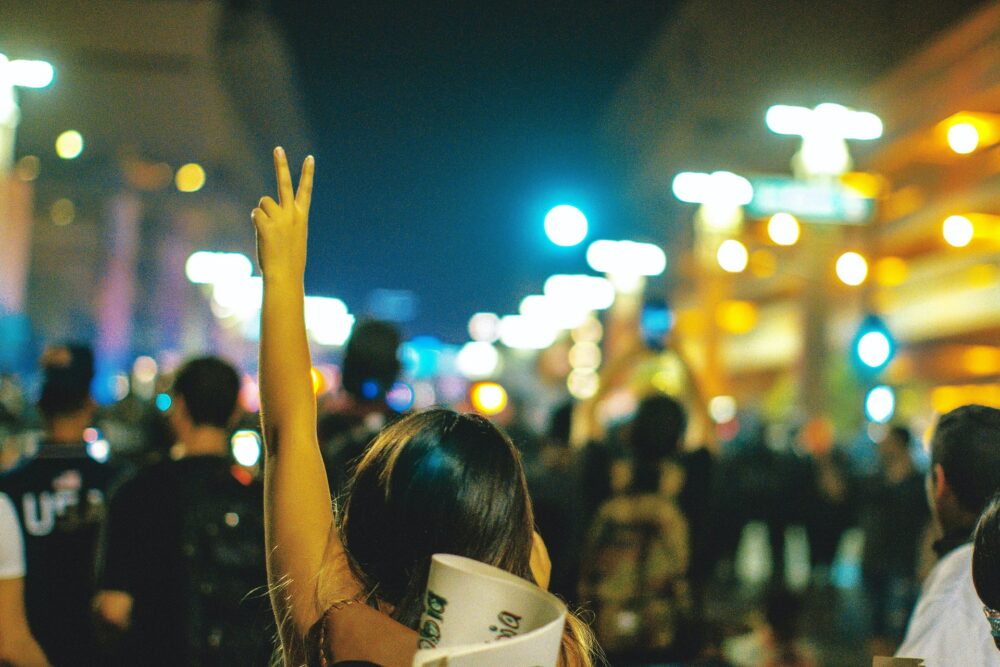 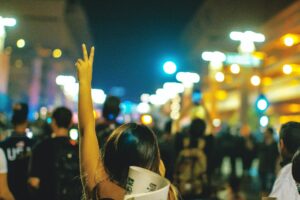 Gen Z and Millennials in Western Europe are activated generations. But what are the issues they care about most? We asked…

YPulse has said that Gen Z and Millennials are generations of activists for years now, and our recent WE Causes / Charity and Activism report found that this passion for doing good extends around the world, too—95% of 13-39-year-olds in Western Europe are passionate about at least one cause, and they’re finding innovative (and effective) ways to show their support. In fact, TikTok has turned into a veritable battleground for protest, and charitable giving rose across Western Europe in 2020 despite the pandemic’s effect on young people’s finances: household donations in the U.K. in 2020 increased to an estimated £11.3 billion, up from £10.6 billion in 2019, while charitable donations reached record highs in Germany and remained steady in Spain. In fact, the pandemic increased the importance of social causes among these gens as long-standing inequities and broken social structures came to light in new ways—and as young people had more time at home to focus on the things they cared about most, including political and social causes and issues.

But what are the causes they care about most? In our WE Causes / Charity and Activism survey, we gave European Gen Z and Millennials a list of issues/causes and asked them to select the ones that they’re most passionate about. Here’s are their 15 top responses: 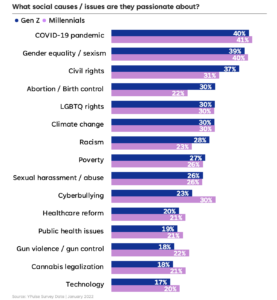 As we round into the third year of life under the pandemic, both Gen Z and Millennials say COVID is the top issue they’re passionate about now, which isn’t too surprising. After all, many young Europeans are still feeling uncertain about their futures as the pandemic continues to alter their life plans and delay major milestones. In fact, 65% of 13-39-year-olds in Western Europe say the pandemic has caused them to reassess their life goals and 62% say their life plans have been majorly disrupted by COVID. And as explored in our recent trend report, The In-Between, though many young Europeans are returning to normal activities, most believe we are still living in the COVID-era and are waiting for a normal that may never exist again. In this “new normal,” some European countries are starting to consider treating COVID like the common flu to move life forward. Spain’s prime minister became the first European leader to argue that it may be time for the EU to downgrade the treatment of COVID from a pandemic to an endemic—an ongoing disease with predictable rates of spreading—and doing away with the likes of quarantines and case counts. The U.K.’s health minister echoed this thinking, indicating another step towards COVID becoming normalized. But with young Europeans divided on how they think the pandemic should be handled at this point, it’s still a major issue in their lives—and likely will continue to be.

Gender equality / sexism is the second most important issue among both Gen Z and Millennials in Western Europe, which is an issue that has become increasingly visible in recent years as the #metoo movement goes global. But it’s also an issue that was made more prevalent by the pandemic. YPulse’s What’s Next For Work trend research found that the pandemic negatively impacted women’s careers far more than men, for example, with more women losing their jobs and taking pay cuts—and fewer women taking on new roles with higher salaries. And according to the Office of National Statistics, the gender pay gap has risen in the U.K. from 7% in 2020 to 7.9% in 2021. In the EU as a whole, women earn on average 16% less than men, and 33% have experienced physical and/or sexual violence, according to data from the European Union. Women are also underrepresented in STEM and make up only 7.5% of board chairs and 7.7% of CEOs. And though the #metoo movement was not wholeheartedly embraced by every Western European nation at first, Gen Z and Millennials across the region have continued to push for change. In fact, early last year, more than 10,000 young people in Britain came forward to share their experiences of sexual harassment and abuse during their teen years by fellow students in what has been dubbed a much-needed “Me Too movement for schools.” But while gender equality is a top-three issue for young people in the U.K., it’s most important to young French and Spanish consumers:

In Spain and France, gender equality is the top issue they say they’re passionate about, and it’s second for young Italians. For young Germans, however, the issue falls farther down on their list, highlighting the fact that gender equality has come farther in Germany (and the U.K.) than other Western European countries—and that the region can’t be viewed as a unified whole. This is most clear by the difference between the top issues young U.K. consumers care about most and the rest of Western Europe. In the U.K., racism is their top issue, with 45% of young people saying it’s an issue they’re passionate about compared to 36% in Spain, 33% in Italy, 31% in France, and 22% in Germany. In part, this is due to the fact that the U.K. has higher levels of diversity, which has also caused the Black Lives Matter movement to take a stronger hold in the region than anywhere else in Western Europe. In fact, Black Lives Matter is the fourth top issue young Britons care about, and it falls farther down on other young Europeans’ lists.

Young British consumers are also far more passionate about mental health help / care than any other young Europeans. While interest in mental health has gone up across Western Europe in the wake of the pandemic, our WE Mental Health behavioral report found that young Britons are more likely to want brands to offer mental health resources and make mental health a part of their marketing and messaging. This has gone over well in several U.K.-based campaigns, including British TV network ITV’s initiative “Get Britain Talking,” which implores young consumers to open up about their struggles with depression and anxiety, while Amazon’s European holiday ad, “Hold On,” featured a young woman who, in a moment of should-be happiness, is plagued by anxiety and worry as she attempts to step back into the world after two years of living under the influence of the pandemic.

While young Germans are the least likely to say they’re passionate about mental health, they’re the most likely to say they care about climate change and environmental issues. YPulse has been tracking Gen Z and Millennials’ climate anxiety for a while now, which has prompted them to find ways to live an eco-friendly lifestyle. YPulse research also shows that 70% of 13-39-year-olds in the U.S. have changed some element of their behavior to become more environment-friendly, and our WE Beauty and Personal Care report found that the majority of young consumers (and Gen Z females in particular) are more likely to buy beauty products labeled “eco-friendly,” “all-natural,” and “sustainable.” In Germany, climate action is a part of life (and the government), and it will likely continue to be an issue they care about. 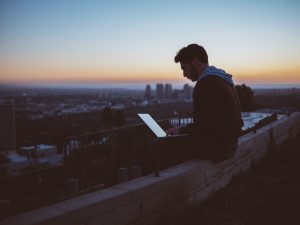