Beauty influencers are raving about a custom lipstick maker from YSL, a Walmart yodel kid revival is happening on TikTok, Euphoria has been the hottest thing on social media since season two dropped, TikTokers are #Ranking products Abby-Lee-Miller-style—plus more internet buzz on this week’s Viral List! 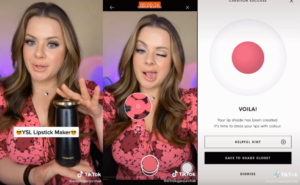 The luxury beauty brand introduced the Rouge Sur Mesure Custom Lip Color Creator last month, and makeup gurus and beauty influencers are raving about the high tech product on TikTok. The lipstick printer comes with a set of cartridges available in four colors: pink, orange, red, and nude, featuring three different shades of each. Users can select their custom shade via the YSL app by using the featured color wheel, uploading a photo of their desired color, or using the virtual try-on scanner, which recommends lip colors based on their outfit / makeup. From there, the machine mixes the different shade cartridges to achieve the desired pigment. TikTokers are raving over the fact that the product not only generates high quality, custom colors based on their outfit, but the machine comes with a compact color holder for easy travel and reapplication throughout the day. YSL notes that the cartridges are bigger than traditional lipstick sizes, giving people endless possibilities—which is ideal, considering the $300 price tag. Customized beauty offerings have been taking over the industry for a few years now, and L’Oréal recently debuted the Colorsonic—an at-home device that easily mixes and applies L’Oréal Paris hair dye. So, it’s only a matter of time before more beauty brands start experimenting with beauty technology to help consumers achieve custom beauty looks. 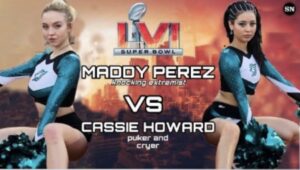 Since the show premiered in 2019, Gen Z and Millennials have been obsessed with all things Euphoria, from the bold makeup and fashion, storytelling, and of course, the main protagonist Rue, played by Zendaya. And now that season two is underway, young viewers have been creating memes about Euphoria on TikTok—particularly when it comes to the show’s depiction of high school culture through fashion and the experiences the characters go through. #EuphoriaHigh has generated more than 30M views on TikTok as users recreate scenes, outfits, and extensive beauty rituals—like Cassie’s 4 a.m. jade rolling, under eye brightening, and all-around beauty perfecting routine. Meanwhile, fans are also creating music playlists that speak to each character’s overall vibe. The first three episodes of season two have experienced significant jumps in viewership upon premiering, with episode four putting it on top as the No. 1 most in-demand show in the U.S. according to Parrot Analytics. Additionally, the data platform reports that Zendaya is now the most popular actress in the U.S. due to her strong fan engagement and her stake in current pop culture—Spider-Man: No Way Home, her relationship with Tom Holland, and Euphoria have all played a role. Variety reported at the beginning of February that season two viewership is up nearly 100%, and hit another high this past Sunday with 5.1 million viewers tuning in to watch episode six, despite oh you know, the Super Bowl also airing. While football fans prepared for the big game, Euphoria fans geared up for the real Super Bowl Sunday, a.k.a. the highly anticipated throwdown between Cassie and Maddie that season two has been building up to. Memes of Cassie and Maddie as the real contenders in Super Bowl LVI trended all over social media—Instagram, Twitter, TikTok, you name it—and social media joked over how Euphoria episode six was the only Super Bowl they were watching. YPulse’s most-recent special report takes a look at the biggest YScore+ rises and falls of 2021, with HBO Max coming out on top with a nine point increase in score. HBO Max’s original content has been winning over young viewers, and though Euphoria didn’t air new content until the beginning of this year, it’s another example of how the streaming service remains a favorite thanks to trend-worthy shows. 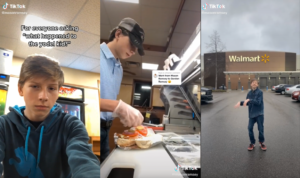 Mason Ramsey (a.k.a. the “Walmart Yodeling Kid”) is Making a Comeback on TikTok

It’s 2018, and “Walmart Yodeling Kid” is all over everyone’s Twitter as users share a video of 12-year-old Mason Ramsey yodeling to the song “Lovesick Blues” inside an Illinois Walmart. The original tweet (which has since been deleted) racked up 40,000 views, while a YouTube version (which does in fact exist) has garnered 2.7 million views to date. But after debuting his hit single “Famous” and appearing on The Ellen Show later that year, Ramsey’s internet presence has been nonexistent—until now. In January, Ramsey’s song, “Before I Knew It,” spurred a TikTok dance trend, and has since been used in more than 300K videos. Though Ramsey has been on the platform since March 2021, he took a break in May 2021, and only started posting consistently once “Before I Knew It” started taking off last month—propelling his second round of internet fame. Now, Ramsey is racking up views for Duet videos where TikTokers dance to his music (and spread hate about it), videos at the pizzeria / sandwich shop he works at, and a mix of wholesome clips of his life in Illinois set to his “Before I Knew It” track (that’s pretty much the only sound he uses in his clips). The “Before I Knew It” TikTok trend is infiltrating other platforms, too: On December 24, 2021, Ramsey had 446,000 monthly listeners on Spotify, and now he has eight million monthly listeners. Meanwhile, the song reached #100 on the Irish Singles Chart during the last week of January 2022 (in 2019, “Before I Knew It” didn’t make it big on any major platform). Aside from owning one of the biggest songs on TikTok right now, users are bonding over Mason Ramsey’s TikTok presence as he reminds everyone of the long lost pre-pandemic days of 2018 when everyone was talking about the “Walmart Yodeling Kid.” 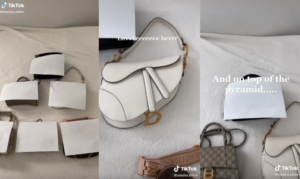 If you’ve ever seen (or heard of) Dance Moms, then you probably know about Abby Lee Miller and the pyramid—a weekly ritual where the dancers are ranked based on their performance. If a dancer was at the bottom, it was basically a death sentence in Abby Lee Miller’s studio, and those at the top—specifically the very top—take on a kind of supernatural power as the ultimate dancer—and ABL’s favorite. With that in mind, TikTokers are using the sound of Abby Lee Miller naming off her pyramid ranking in an episode of Dance Moms to rate their favorite beauty and fashion products, TV / movie characters, and more. The sound is as follows:

“On the bottom, Paige. You were good, I’m waiting for you to be great. Next, Kendall. You didn’t stick out to me. Next is Brooke. Next, Nia. You’re third on the pyramid, you were third overall high score. And, Mackenzie. And on top of the pyramid, going three for three, once again, is Maddie.”

More than 23K videos have been made using the sound, while TikTokers tag #Ranking in their pyramid ritual videos. The most-viewed video is from @stesha.attire sharing her “purse pyramid,” ranking designer purses from Louis Vuitton, YSL, and Chanel (if you want to see how the luxury products performed, you’ll have to watch the clip). Another popular clip is from @tchaoskin rating her sunscreen collection, sharing how products from Supergoop, Cocokind, and more brands hold up. While most of the #Ranking videos are from users sharing their quality rating for skincare, makeup, and fashion products, TikTokers are also using the trend to rank characters from Encanto, their boyfriend’s yearbook pictures, haircuts, and pretty much anything else that’s pyramid ranking-worthy.

Kanye West posted a picture of himself holding a notepad to prove his Instagram account wasn’t hacked, spurring a meme outbreak on the internet.

Simon Leviev (a.k.a. the Tinder swindler) reportedly wants to become a dating expert.

Victoria’s Secret is (finally) making strides in representation, working with Sofía Jirau, a Latina model with down syndrome.

Influencer Brittany Dawn was sued by the state of Texas for allegedly misleading consumers with eating disorders, and after quickly rebranding as a Christianity-focused influencer, people are calling out her scamming tendencies once more.

This high school teacher is going viral on TikTok for explaining what “once removed” (as in one’s the family tree) means.

Amazon drivers are fed up over requests to dance for home surveillance cameras while delivering packages.

Yes, people are still obsessed with Wordle, and some users experienced a glitch this week making them get two different answers for the game. Others, however, are convinced that The New York Times has made the game harder since its acquisition.

TikTokers are mourning the death of their favorite internet famous cat, Pot Roast.

A new Blue’s Clues film starring all of the show’s hosts through the years is coming to Paramount Plus.

Chinese fans of Friends aren’t happy with the censorship in recently released episodes of the beloved sitcom.

People are frustrated over NBC mixing up national anthem singer Mickey Guyton’s nameplate with Jhené Aiko’s at the Super Bowl on Sunday.

The Super Bowl Halftime show experienced a 121% jump in streaming.

The season two trailer for Bridgerton is here.

…and the show has officially been renewed for a fifth—and final—season.