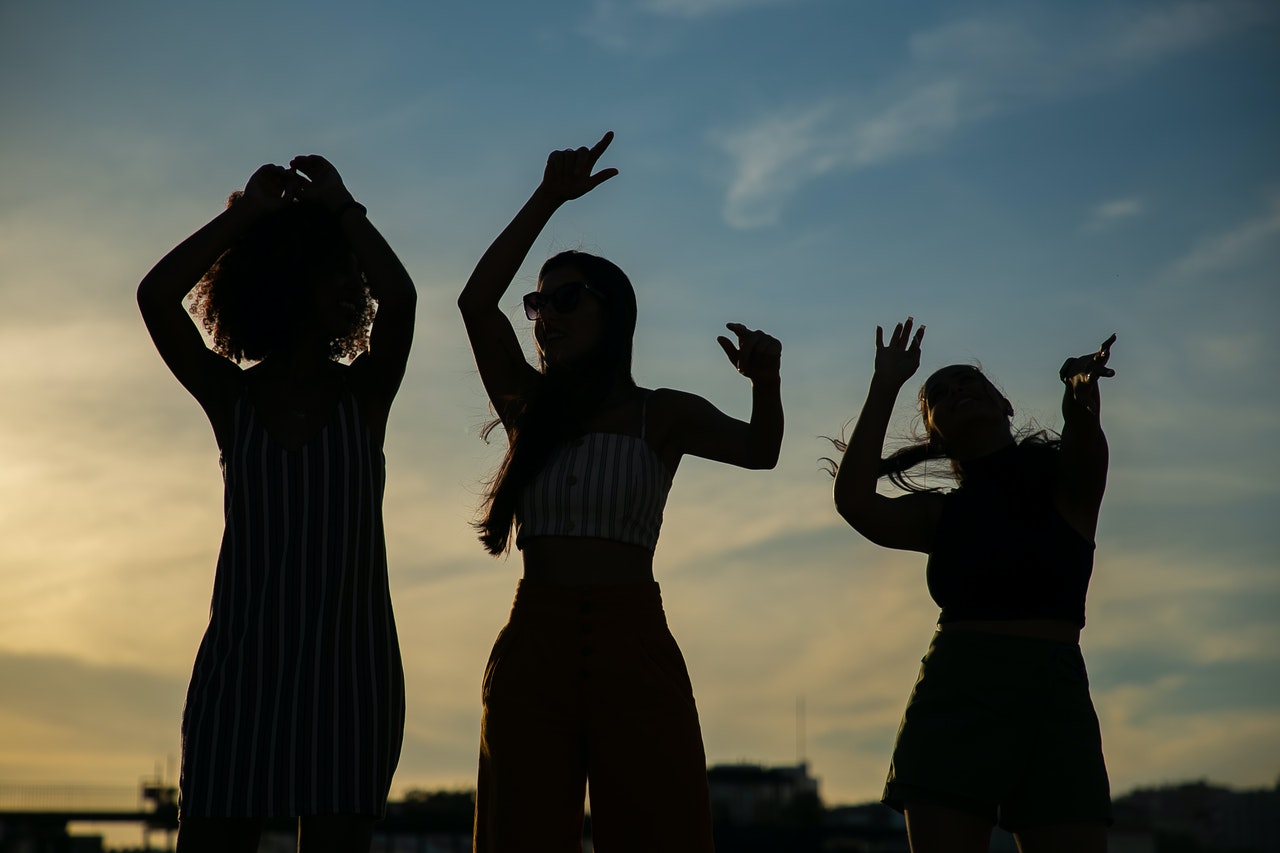 From having good mental wellbeing to falling in love, these are the goals Gen Z and Millennials say became more important because of the pandemic…

We’ve long known that Gen Z and Millennials are in no rush to achieve the typical milestones of adulthood—and that’s true of young Europeans, too. In YPulse’s recent WE life milestones and future plans behavioral report, nearly four in five 13-39-year-olds in Western Europe say they plan to reach milestones in their own way. The majority feel that their generation has the freedom to choose their own path, and just 42% say they have the same goals as their parents. But when the pandemic upended their lives, Gen Z and Millennials faced big delays in important life events, which affected the trajectory of the rest of their lives—and forced them to reconsider what was really important to them. In fact, 65% of European Gen Z and Millennials tell YPulse that COVID has caused them to reassess their life goals. So what’s important to them now? In our recent survey, we gave young Europeans a list of personal goals and milestones and asked them to rank the importance of each. Here’s what we found: 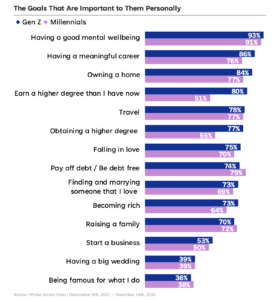 We’ve been tracking young consumers’ focus on mental health for some time now, and have watched as their continued advocacy and interest in the topic have fueled trends across sectors. Now, more than nine in 10 Gen Z and Millennials in Western Europe say maintaining their mental wellbeing is an important goal for them personally—and it’s the top goal for both generations. What’s more, when we asked 13–39-year-olds in Western Europe to tell us the top personal goal they’re working towards this year, “taking care of my mental health” was among their top five answers. YPulse’s recent WE Mental Health report found 41% of young Europeans say their mental health has been negatively impacted by COVID, and the majority say they’ve experienced burnout in the past year (young females in particular)—so it’s no wonder it’s their number-one personal goal.

Beyond having good mental well-being, young Europeans also say that the majority of typical life milestones are important to them personally—as well as some that are more specific to these generations’ interests and life situations. Travel, for instance, is top a personal goal among more than three-quarters of both Gen Z and Millennials, underscoring their status as the wanderlust generations, as is paying off debt/remaining debt-free, which is a goal previous generations may not have had to consider as much as Gen Z and Millennials—and especially the older generation, who is also more likely to say this is an important goal. In fact, Millennials in Western Europe were falling behind financially long before the pandemic, which put major milestones such as home ownership and starting families on hold. And while many (many) speculated that these generations would never show interest in buying houses and having kids, our research shows that the opposite is true: the vast majority of 13-39-year-olds in Western Europe say both homeownership and starting a family are important goals to them personally.

Owning a home is even more important to Gen Z, who it’s often been said is the more pragmatic generation when it comes to future and financial planning. In fact, other bastions of stability are also high on their list, including “having a meaningful career,” 86% of whom say is an important goal compared to 76% of Millennials, and obtaining a higher degree, which Gen Z says is important by a margin far higher than their older peers. The importance of education was called into question during the pandemic and 63% of primary/secondary school students in Western Europe told YPulse they don’t believe they need a university degree to be successful. But for European Gen Z, education is still an important goal they hope to achieve, and one that they say was made even more important by the pandemic: 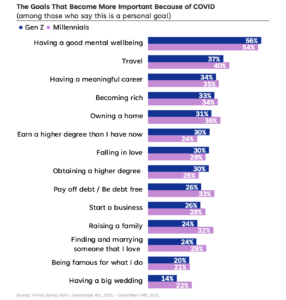 Among the 80% of Gen Z who say earning a higher degree than they have now is an important goal to them personally, 30% say it became more important because of the pandemic compared to 24% of Millennials who have the same goal. Overall, however, Millennials are more likely to say that a variety of goals became more important to them during the pandemic—even the ones that they’re likely to say are goals for them personally. While more Gen Z say their goals include owning a home, having a meaningful career, and starting a business, Millennials are more likely to say that it took COVID’s impact for them to truly understand the importance of these things in their lives.

For both generations, COVID upped the importance of mental health, with the majority of Gen Z and Millennials saying having good mental wellbeing became more important to them in the wake of COVID, beating out every other goal in terms of importance by far. Also for both generations, travel became far more important, with 37% of Gen Z and 40% of Millennials saying that COVID made them hold this goal closer. It makes sense—while the pandemic might have put their adventures on hold, it didn’t end their wanderlust. YPulse even predicted a roaring ‘20s experience rebound and massive travel boom once young consumers are comfortable traveling again, and our forthcoming WE trend report, The In-Between, found that travel is in young Europeans’ plans this year as they move into a new normal that sees them continuing on with their lives—and goals—regardless of the pandemic.