Young Females Are Burnt Out 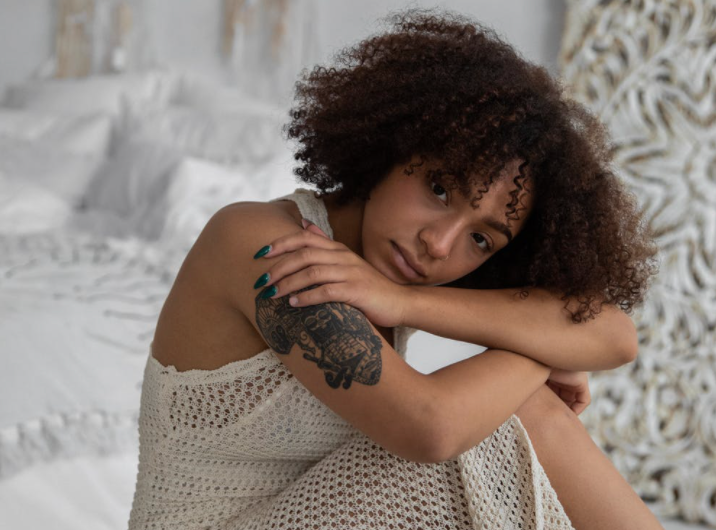 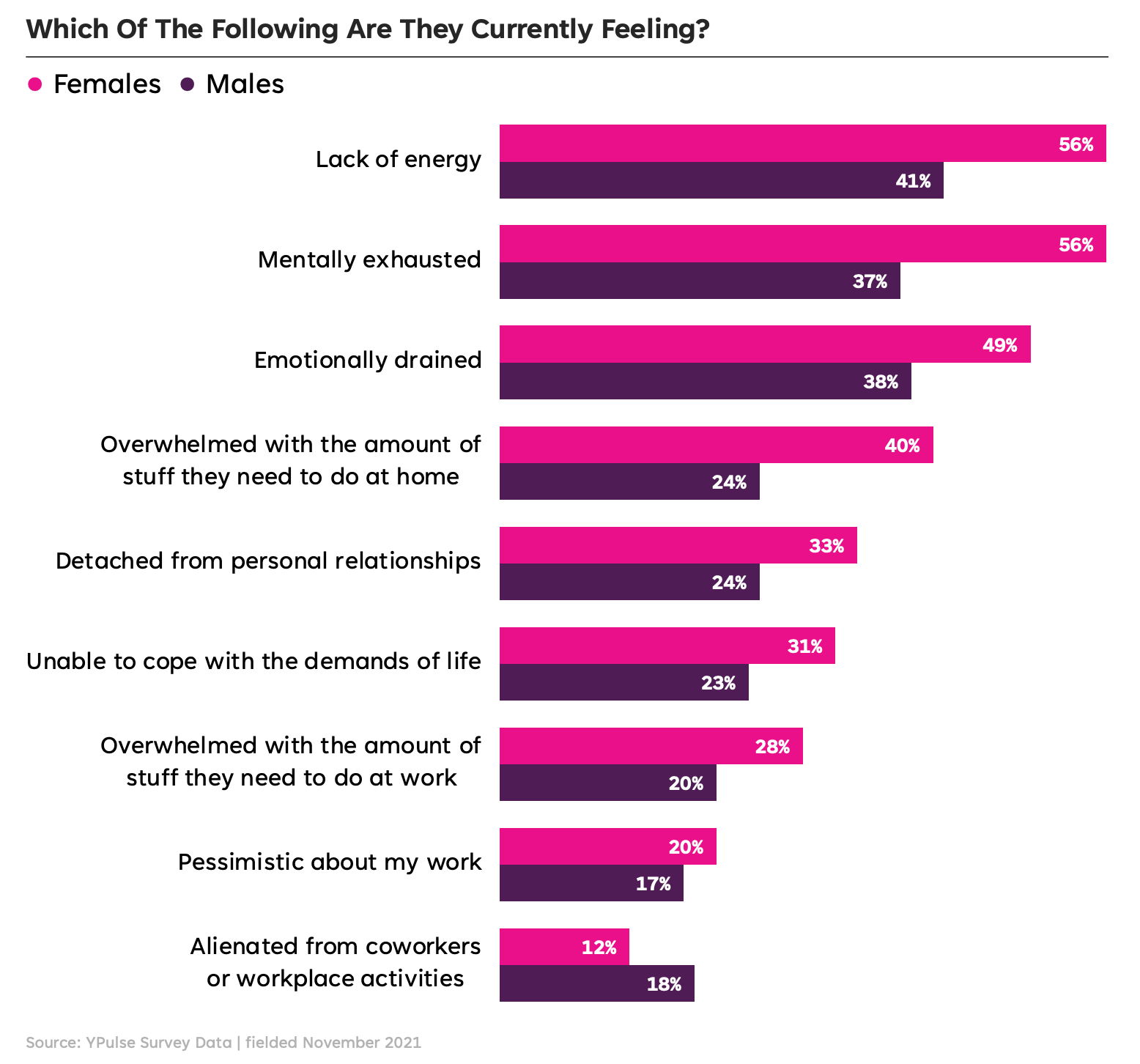 Young females are more likely than males to say they currently feel a lack of energy or mentally exhausted, with more than half saying so. They’re also more likely than males to say they feel emotionally drained or overwhelmed with the amount of stuff they need to do at home. Their comparative stress has at least one simple cause: they are actually doing more. The reality is that while these generations idealize and aspire to gender equality, young females are often taking on more work at home while also working. YPulse’s research shows that young females are more likely to be doing a wide range of household tasks, from washing dishes to grocery shopping. If they are juggling more tasks at home, it makes sense that they would feel more overwhelmed and unable to cope with the demands of life than their male counterparts.

YPulse’s What’s Next For Work trend report also found that young females continue to deal with disparities in the workplace, and that they are still not as likely to make as much as their male counterparts, which is a potential contributor to their stress levels.  In fact, our trend data shows that Millennial women’s careers have been especially impacted by COVID, with 81% of 13-39-year-old females saying they have felt burnout because of work compared to 75% of 13-39-year-old males. And the International Labour Organization found that younger workers 15-24-years-old were “disproportionately impacted” by employment losses in the U.S., seeking losses of 8.7% and women in particular experienced unemployment losses of 5% compared to men at 3.9%. The Institute for Women’s Policy Research also reported that 5.4 million women lost jobs since the start of the pandemic—55% of all net U.S. job losses in that time period, and almost 2.1 million women vanished from the paid labor force entirely. Economists predicted that the crisis would intensify the gender wage gap by 5%. And while most Millennials have recovered from employment loss during the latter part of 2020, many women have yet to rejoin the workforce. In some cases, it’s influencing Gen Z and Millennial women to rethink their careers (or leave their current jobs and join the Great Resignation trend that began to take off last year) entirely for more fulfilling roles where they’re appreciated and being paid properly. Our research found that salary, work-life balance, and health benefits are among the top qualities they’re looking for in an ideal job.

Meanwhile, during the pandemic Millennial women were more likely than their male peers ad partners to leave the workforce to take care of their kids, with 34% of Millennial females who resigned in the last year saying they did so to be a stay-at-home parent compared to only 4% of males—another potential contributor to their stress and burn out levels. BIPOC moms in particular “are still trying to cope” nearly two years into the pandemic. According to one psychologist, because Black, Hispanic, and Asian youth were “more likely” to live in school districts where online school was the only option during the pandemic, moms were forced to stay at home with them. Because of this, women who were working from home “felt particularly vulnerable” to losing their jobs especially since homeschooling took away much of their time, attention, and availability—and resulted in decreased productivity levels. Another study found that moms with young children had to cut down their work hours at a rate that is “four to five times higher” than dads to take on child care, homeschooling, and household responsibilities, which impacted their mental health.

Young females are also more likely to say that they feel detached from their personal relationships. Our behavioral data found that 38% of 13-39-year-old females say their relationships with family and friends have been negatively impacted by COVID compared to 34% of males, while research from the Survey Center on American Life suggested that the pandemic has impacted Americans’ feeling of belonging with “47% of Americans reporting having lost touch with at least a few friends over the past year.” Women were found to be the most affected by quarantines, with nearly 59% reporting they fell out of contact with at least a couple of friends.

It’s not just their current state of mind that shows that young females are struggling more than their male peers. We also asked young people how they’re feeling about the coming year, and their responses show that their outlook on the future is also drastically different: 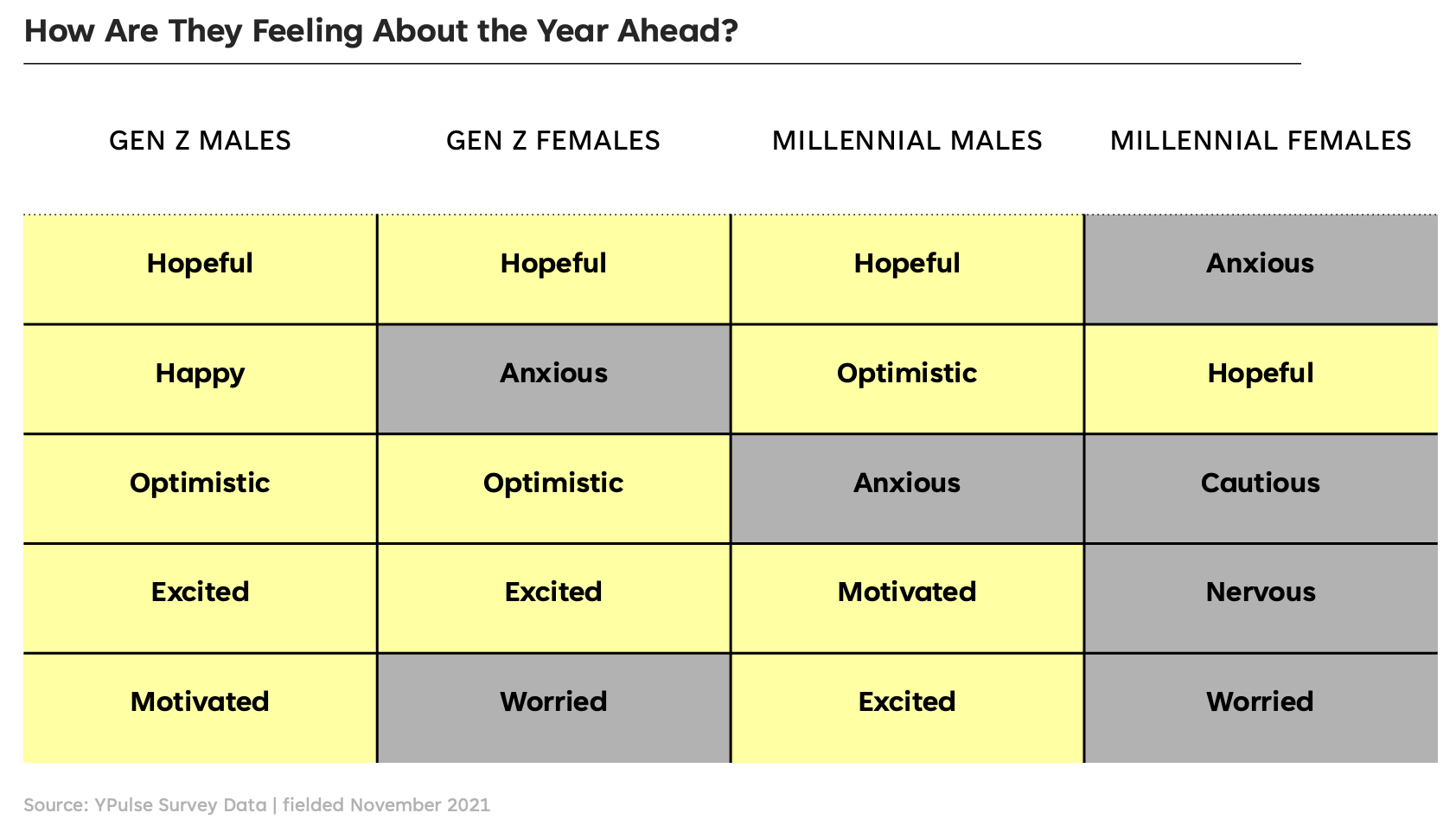 Considering the clear mental wellness struggle that young females are experiencing compared to males, it makes sense that they would be more likely to be seeing anxiety relief and mental health resources. Our mental health research shows that young females are also more likely than males to say they have done a beauty / self-care routine, downloaded a meditation or mindfulness app, tried a new diet, tried medication prescribed by a doctor, or made a playlist to combat stress and anxiety in the last year.

Our research also shows females are more likely than males to be seeking chemical-assisted escapes from their stress as well: 36% of 13-39-year-old females have tried holistic remedies to combat stress and anxiety in the last year compared to 31% of 13-39-year-old males. Data from Headspot found that Gen Z and Millennial women are fueling the cannabis industry’s growth, and year-over-year legal cannabis sales among women 21-24-years-old grew 151% in 2020, while sales among men in the same age range followed at 118%. Meanwhile, an increasing number of “cannamoms” are using cannabis to help them parent. Our research found that 42% of Millennial moms have tried or experimented with marijuana, and while the “cannamom” movement isn’t exactly a new phenomenon, the previously small in-person and online groups have been growing.

It’s obvious that there isn’t gender equity when it comes to mental health, and our research signals the continued disparity between young females and males’ well-being. While brands can (and should) help all young consumers—there’s a very clear opportunity for them to help the young women who are struggling and looking for help.

Western Europe
These Are Young Europeans’ Top 15 Hobbies Right Now
Hobbies are a source of community for Gen Z and Millennials. Here are the ones they...
North America
The Top Movies Young Consumers Are Excited to See This Summer
Which movies will be bringing Gen Z and Millennials back to theaters this summer? W...
North America
Young People Are Saying Goodbye to the iPod on The Viral List
TL;DR: RIP, iPod—Apple is going to discontinue making the devices after ne...